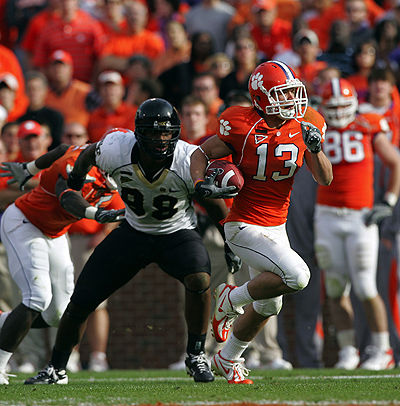 Clemson's Tyler Grisham (13) runs for extra yards after catching a pass against Wake Forest. Grisham played for Clemson from 2005 to 2008 and is now the Tigers' wide receivers coach. File/staff 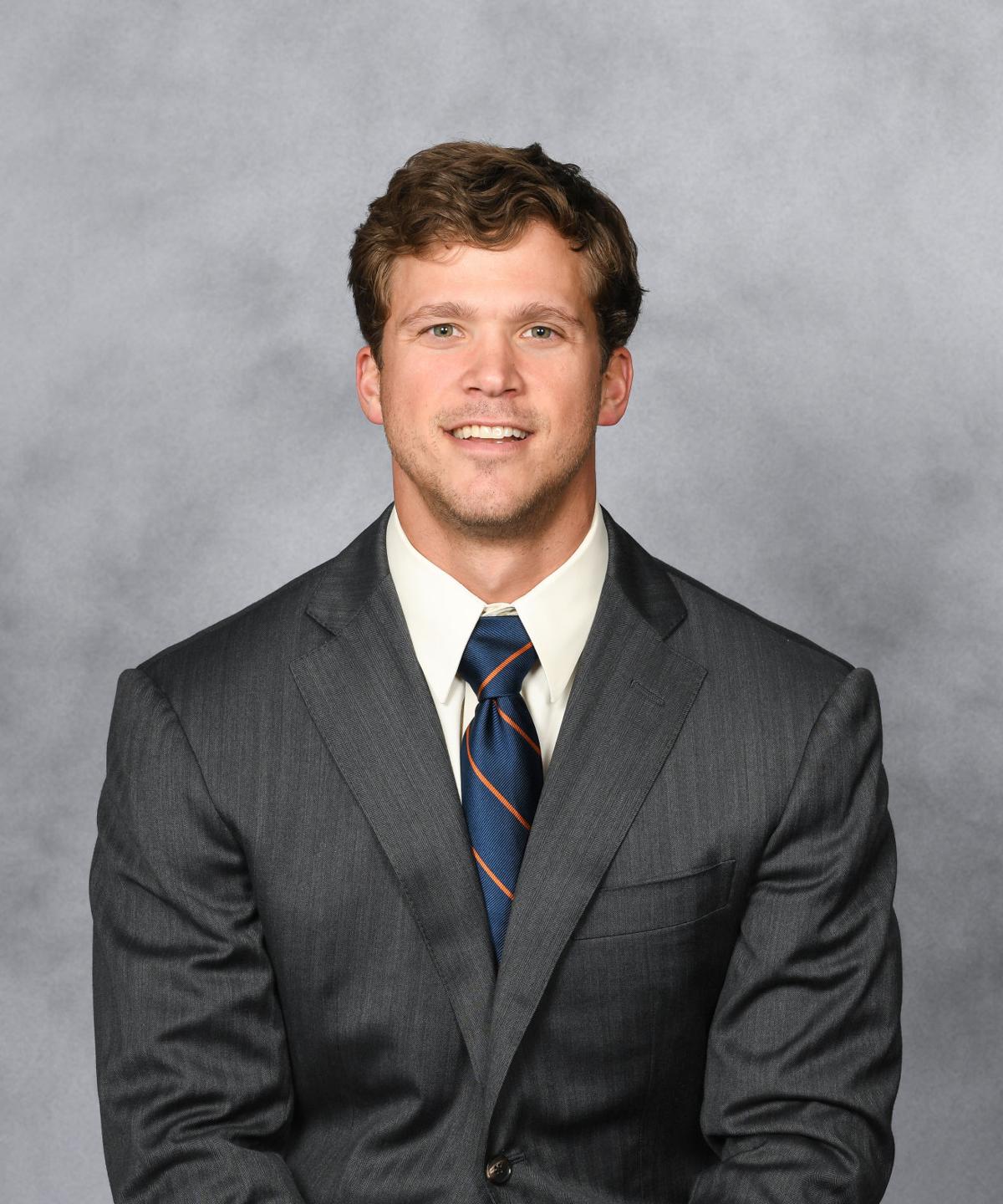 CLEMSON — Tyler Grisham saw a promotion coming. Clearly, six full football seasons as an analyst for Dabo Swinney’s elite program were enough for a former Clemson and NFL player to cash in and land a job as a wide receivers coach.

Ready? Grisham, 32, had notebooks full of ideas, plays and motivational nuggets that shaped a portable “philosophy.”

He had a Power Point presentation aimed at closing a deal before any interested head coach or athletic director.

When Grisham last fall confidently told his wife Maggie to prepare for a big change, he thought the couple and their three young kids would be moving out of town, not packing boxes for a move down the hall.

Grisham, “full of Clemson DNA,” says he is “blessed” and “thrilled” and couldn’t be happier.

Clemson gets to keep a rising star in the mold of Scott and fellow co-offensive coordinator Tony Elliott. They were former Tiger receivers who played for a personable wide receivers coach who owns two national titles as a head coach and aims for a third when Clemson plays LSU in the national championship game on Jan. 13 in New Orleans.

Grisham, however, has something Scott, Elliott and Swinney do not: NFL experience.

It was just four games and only one catch over two seasons with the Pittsburgh Steelers. But he also experienced a Denver Broncos training camp and mini-camps that included lots of time around quarterback Peyton Manning’s mind and work ethic.

“Anytime a guy has played at the highest level, who has been there and done that, it definitely helps,” quarterback Trevor Lawrence said.

This was a great and obvious hire, popular with staff and players.

“He’s cut from the same cloth as I am,” said Elliott, a James Island High School graduate. “He played here and he understands the position, but he played at a higher level. He’s passionate. He’s an unbelievable family man, a man of faith. He’s a guy that cares.”

Like Swinney, Grisham played high school football in Alabama (Spain Park High School in Birmingham) and was wooed to Clemson by Tommy Bowden (Swinney as a former assistant coach who had entered private business; Grisham as a player attending a Clemson summer camp). He caught 132 passes for the Tigers from 2005-2008.

Also like Swinney, Grisham seems to get a kick out of each day, on and off the field.

He loved that Davis’ birthday was Dec. 28, the day Clemson beat Ohio State in the Fiesta Bowl to advance to New Orleans.

No one on the Clemson coaching staff these days looks forward to practice more than Grisham, who as an analyst was unable to talk to players once a workout started.

“I couldn’t coach, couldn’t demonstrate, couldn’t do anything at practice,” Grisham said. “That’s the hardest thing, especially if you feel like your strength is coaching and communicating.”

5 questions for Clemson ahead of national championship showdown with LSU

“It’s always cool to see someone like him who has done all that analyst work get moved into a coaching position,” Lawrence said. “You see all the work he puts in doing the little things that no one ever sees and to see him get his chance is gratifying.”

Brandon Streeter, also deserving, got “passing game coordinator” added to his quarterbacks coach duties with Scott’s departure (though Scott remains on the Clemson staff through the national championship game).

Scott will be missed.

He was a recruiting coordinator before getting a share of the offensive coordinator role.

But it’s easy to see Grisham as a mighty recruiter, too.

“He can communicate with all levels of guys,” Elliott said, “the walk-ons and the five-star recruits.”

Grisham is also a straight-shooting realist. His short NFL career essentially ended, he is quick to point out, “when the Steelers drafted Antonio Brown and Emanuel Sanders and they were better than me.”

It’s all neatly compiled, a bunch of stuff from Grisham’s days in the NFL to the pre-Ohio State practices of last week, notebooks he only has to move down the hall and not out of town. That’s a good thing for Clemson.