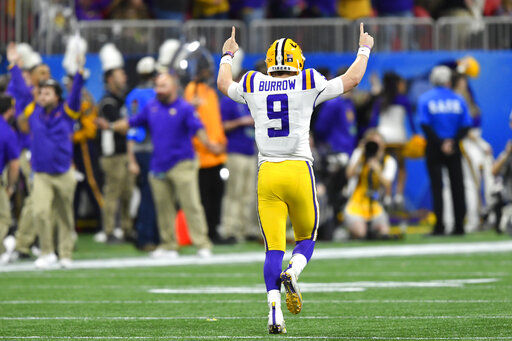 LSU quarterback Joe Burrow, the 2019 Heisman Trophy winner, celebrates a touchdown against Oklahoma during the Tigers' 63-28 victory over Oklahoma in a College Football Playoff semifinal game at the Peach Bowl on Dec. 28 in Atlanta. File/John Amis/AP 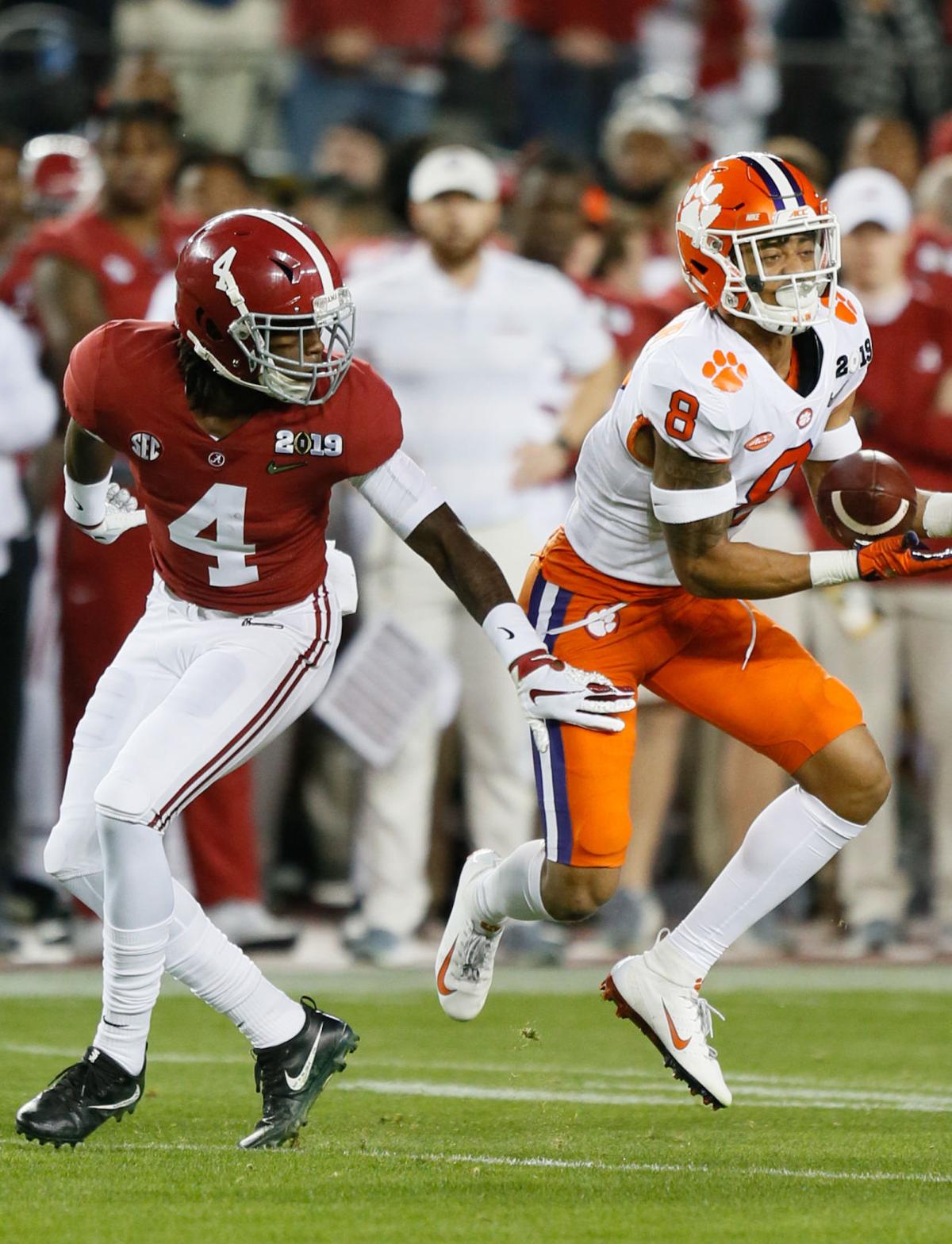 LSU quarterback Joe Burrow, the 2019 Heisman Trophy winner, celebrates a touchdown against Oklahoma during the Tigers' 63-28 victory over Oklahoma in a College Football Playoff semifinal game at the Peach Bowl on Dec. 28 in Atlanta. File/John Amis/AP

He’s not as talented as Lamar Jackson. But No. 1 LSU in the national championship game Monday in New Orleans will have a much better supporting cast than Jackson had as Clemson beat Louisville (42-26) in 2016.

Tua Tagovailoa might make a better pro. But Burrow is healthier than the former Alabama quarterback was last year as Clemson rolled to a 44-16 win and a second national title in three seasons.

He’s more experienced than Oklahoma’s Baker Mayfield was while losing to Clemson (37-17) as a sophomore in the 2015 Orange Bowl.

5 questions for Clemson ahead of national championship showdown with LSU

Or Ohio State’s Justin Fields was during the Buckeyes' 29-23 Fiesta Bowl loss on Dec. 28.

Which means this 5,208-yard passer and Heisman Trophy winner easily is the toughest test for present Clemson defensive backs.

And that no position unit is under as much pressure going into a Superdome showdown.

Joe Burrow vs. the Clemson volcano cuts both ways.

Clemson eruptions are hard on quarterbacks.

The best secondary Clemson has fielded under head coach Dabo Swinney doesn’t have to win every Burrow battle, it just has to win enough to give the Clemson offense enough opportunities to prevail.

Evidence says it can work. It just might require all the depth, oxygen and late-game heroics an elite team can muster.

A critical turnover is required, early or late and preferably both.

Ohio State’s Fields came into the Fiesta Bowl with 40 touchdown passes and one interception. He threw one touchdown pass and two interceptions against Clemson, the last one Nolan Turner’s game-saver in the end zone.

Muse’s favorite part of that biggest takeaway of the Clemson season was All-America linebacker Isaiah Simmons celebrating and then falling to the ground.

“He was just dog-tired,” Muse said.

LSU spent the fall wearing out the SEC.

They both have 18 touchdown catches.

He’s a running back.

“A lot of people try throwing to running backs,” Muse said. “They do it well.”

Clemson’s secondary depth beyond cornerbacks Terrell and Derion Kendrick and safeties Muse and K’Von Wallace includes Turner at nickel back.

D.J. Uiagalelei has arrived just in time to help Clemson get ready. The standout quarterback recruit is on campus as an early enrollee and, eligible to practice, is a candidate to run the scout team.

Muse thinks scout-team quarterback duties will be hard to pry away from spry veteran Jimmy Greenbeans.

That’s the alter ego of defensive coordinator Brent Venables, who thinks the best way to evaluate his defense is from a pocket perspective.

Clemson defensive backs and their LSU counterparts will hum a similar tune all week: going against a great passing offense in practice is the best way to prepare for facing another at the Superdome.

Both teams have good reason for fresh concern.

LSU knows the elastic Simmons is as good in pass coverage as he is at stopping the run.

“I don’t know how to classify myself,” Simmons said Monday. “Honestly, you could put me anywhere.”

That would be fun.

“Yeah,” Simmons said. “I’ve been trying to get a receiver play all year. The coaches don’t want me to get hurt.”

“What are they saying?” he asked. “Are they coming after me?”

Maybe an ESPN expert or two has suggested as much, he was told.

“(LSU has) done a great job doing their thing against all the teams they’ve played,” Muse said. “We’re just going to do what we do and, hopefully, it will be good enough.”

Clemson linebacker Chad Smith was named defensive MVP of the Fiesta Bowl for his performance against Ohio State.

Defending champion Clemson is preparing to face LSU for the national title on Jan. 13 in New Orleans because of action, not words. But words matter and “love” is at the core of Clemson’s four national championship game appearances in five years.

Tee Higgins retreated to the locker room in the first half of the Fiesta Bowl, but surprisingly returned in the second half.

Two elite football programs share so many things, including a mascot and Death Valley. But where do these Tigers earn their stripes in a wide-ranging comparison?

The Clemson Club of New Orleans is surrounded by a different bunch of Tigers, and ready to have a blast at the Clemson-LSU national championship game. And so are LSU fans in Charleston