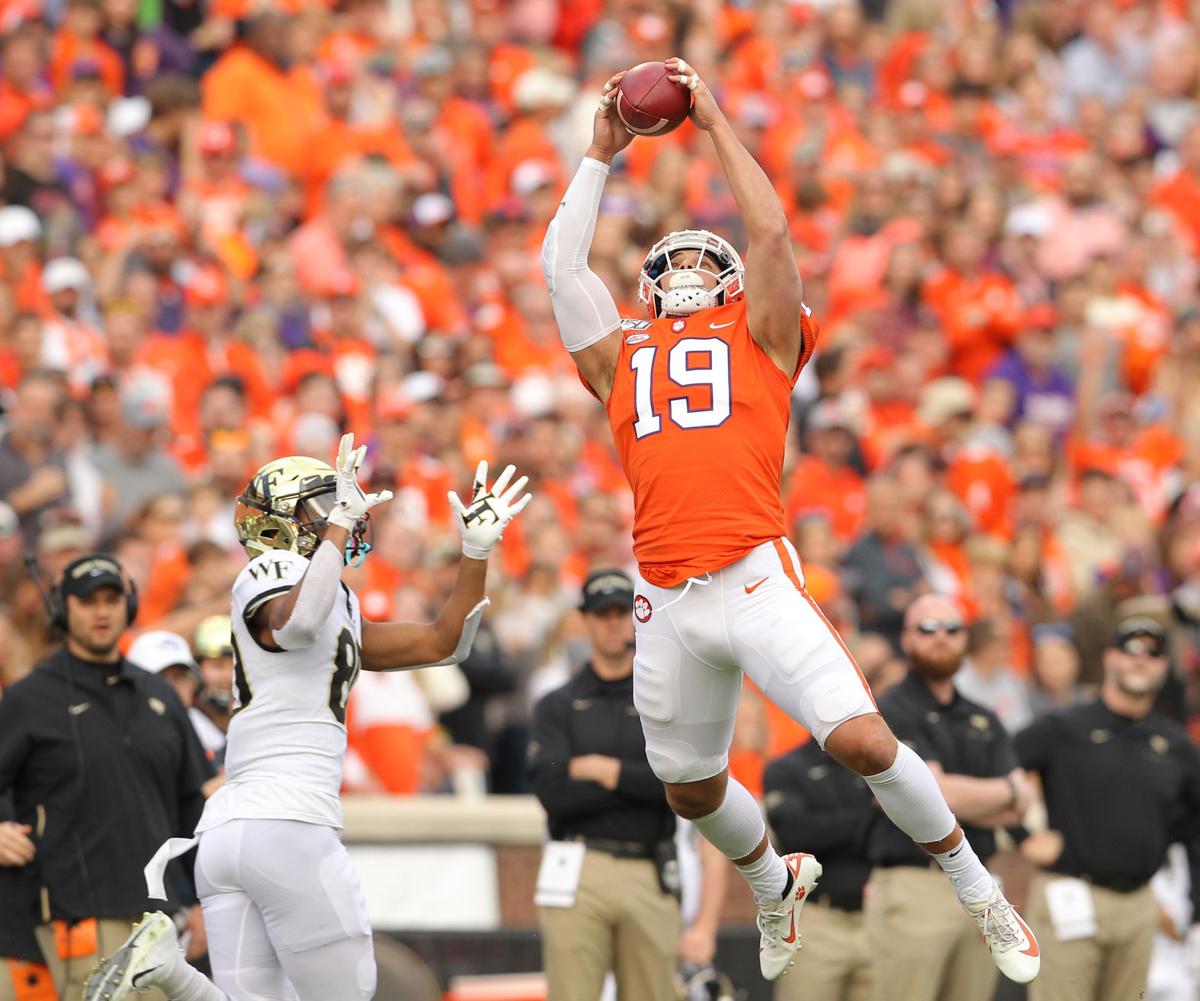 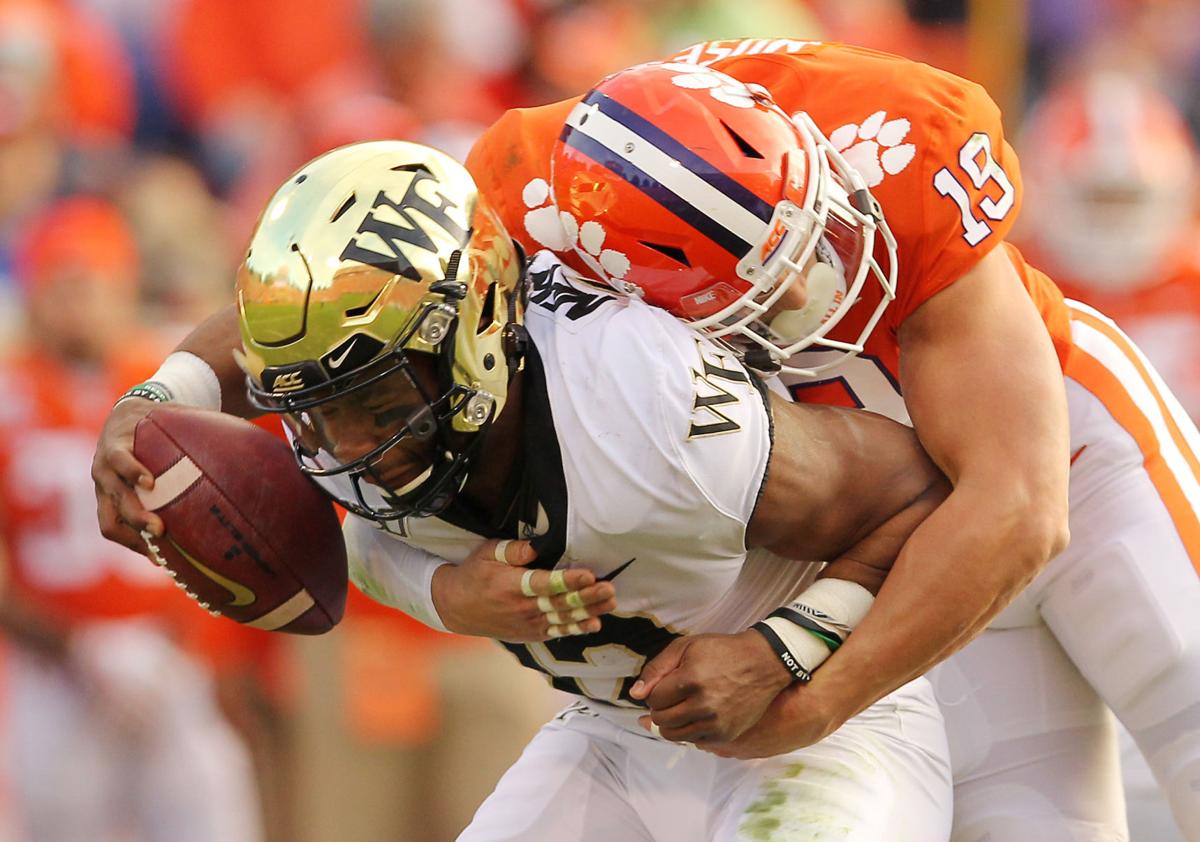 CLEMSON — The 2019 Clemson defense plays as if consistently insulted by ESPN’s GameDay crew and politicians on both sides of the aisle.

Ignored by neighbors, mocked by strangers, limited to one trip through the buffet line on Prime Rib Night.

“The whole year this defense has had a chip on its shoulder,” said Tanner Muse, the personification of a focused rage. “We lost a lot of great guys from last year and a lot of people didn’t thing we were going to be worth a dang.”

The 6-2, 230-pound safety was all over Death Valley on Saturday, before and during No. 3 Clemson’s 52-3 ACC victory over Wake Forest.

Before Muse ran down The Hill for one last gulp of Clemson’s famed pregame tradition, he made sure to catch the eyes of his parents, Kevin and Shannon Muse of Belmont, N.C.

Soon after, he crashed through the Demon Deacons’ line to zap running back Kenneth Walker III for a 2–yard loss.

He had a sack.

Muse, as Clemson was improving to 11-0, had himself a whale of a Senior Day, soaking in every moment of fans not booing but yelling “Muuuuuuse!”

Muse set the tone for another suffocating performance for a defense that was ranked atop many college football efficiency charts before allowing just 105 yards against Wake Forest.

That is, a 7-3 team that was No. 19 in the College Football Playoff rankings a week ago. The Deacons were without star receiver Sage Surratt, but does anyone think the Tigers were vulnerable in this spot?

Clemson, with its soft ACC schedule, won’t get widespread kudos until it takes down Ohio State or some other College Football Playoff semifinal foe.

Muse is used to that.

It was he who welcomed scrutiny of the secondary going into the Cotton Bowl last December. After a 30-3 victory over Notre Dame and a 44-16 upset of Alabama, Clemson had respect and its second national championship in three seasons.

“This team has had a determination and drive to prove everybody wrong,” Muse said, “and to prove the people right that did believe in us the whole time.”

There are other guys involved here.

Isaiah Simmons has blossomed into perhaps the nation’s best linebacker and benefits from playing alongside James Skalski and Chad Smith.

The “best secondary since Dabo Swinney was named head coach” is as advertised.

A deep, young defensive line makes it hard for offenses to get anything going.

It’s getting harder to argue that if this isn’t a very elite group, potential lurks.

At the controls is defensive coordinator Brent Venables, who makes sure little is left to chance. Muse’s interception came against a formation Clemson saw against Wofford last weekend. But against Wake Forest, the Tigers defended the formation differently, baiting Newman into a risky throw.

The backfield tackle on Walker came as Muse executed an up-the-middle run blitz so splendidly he almost broke up the handoff.

“It’s been awesome to see him grow up and become the leader and player he is,” Venables said. “He can do so many things.”

The only time Muse looked awkward was just after the interception as he attempted to dance with fellow safety K’Von Wallace. He wouldn’t have outscored Sean Spicer on Dancing with the Stars.

But on to a bye week and then the regular-season finale at South Carolina. The rivalry game had extra spice for the Muse family before Gamecocks tight end Nick Muse suffered a season-ending knee injury against Vanderbilt on Nov. 2.

Nick Muse, Tanner’s younger brother, had 17 catches for South Carolina in his first season after transferring from William & Mary.

“Definitely disappointed,” Tanner Muse said. “We really looked forward to that game as a family, and me and him just being able to compete. That’s just a dream to have brothers (playing against each other). But I’m going to see him, regardless, so it will be special.”

Clemson is two wins away — South Carolina and the ACC Championship Game — from another playoff appearance. That would be five in a row for Clemson and four straight for Muse, who knows no other path out of a college football regular season.