The South Carolina-Clemson football series was played every season from 1909 through 2019, the second-longest uninterrupted series in major college football (behind Minnesota-Wisconsin) entering the 2020 season. The teams would have played this weekend if not for COVID-19. File/Travis Bell/Sideline Carolina 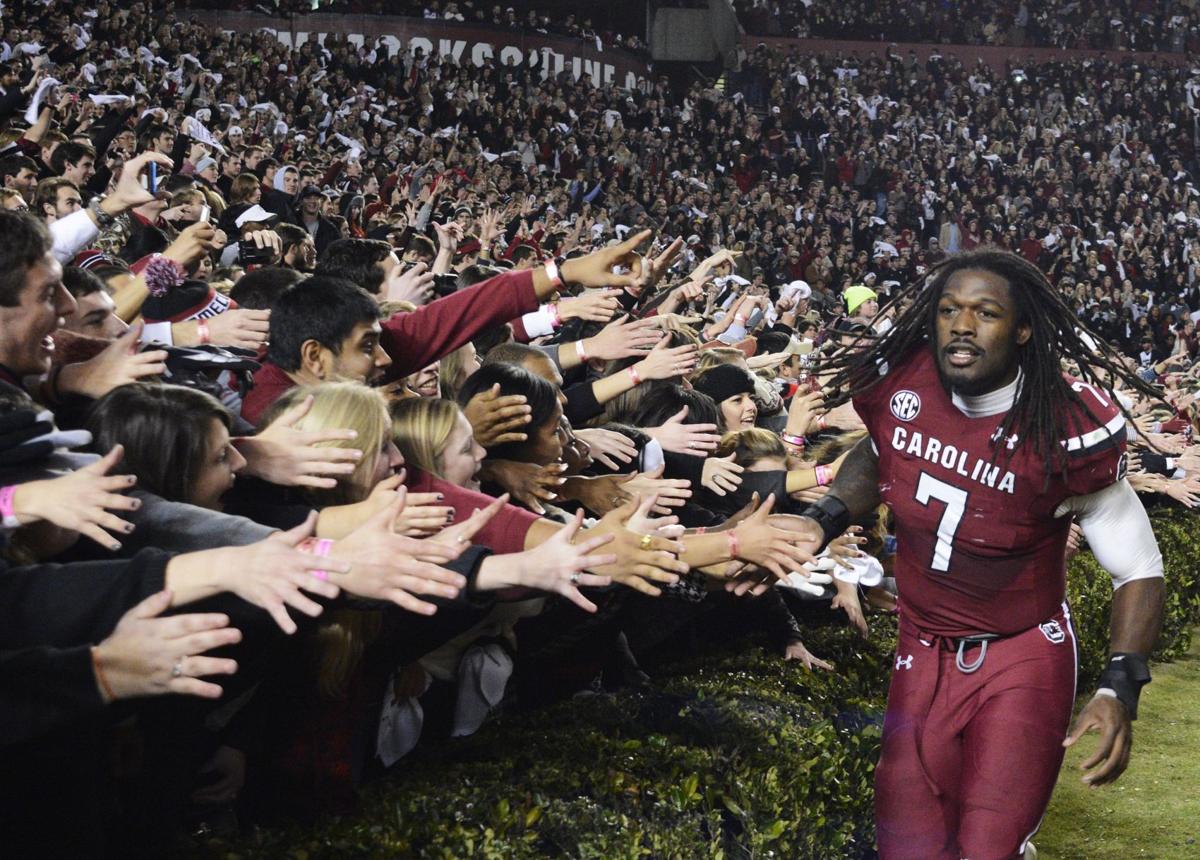 South Carolina defensive end Jadeveon Clowney (7) celebrates with fans after the Gamecocks' 31-17 victory over Clemson in 2013. Clowney had 4½ sacks in a 2012 win at Clemson. Richard Shiro/AP

The Gamecocks’ Jadeveon Clowney played the whole game. And had 4½ sacks to show for a sunny afternoon in Laurens County.

How great to see so many former Clemson and South Carolina players and coaches give up part of their Thanksgiving Day for Big-Secret Thursday.

All to — shhhh! — (unofficially) keep a football series somewhat alive.

Officially, of course, South Carolina and Clemson will not play this coronavirus-restricted season for the first time since 1909. Sadly, there’s nothing these brave 2020 players can do about that.

But certain rivalry veterans insisted, agreeing to play as long as there were no cameras and plenty of turkey and stuffing. They picked a perfectly quiet neutral site hidden off Route 76 near a grove of hickory trees that gave this road crossing its name.

Though roughly halfway between Death Valley and Williams-Brice Stadium, it’s a little closer to Clemson, only fair with the Tigers having home-field advantage on the original schedule.

Those hilarious South Carolina students and their hijinks! Some guys at the frat house found out what was going on, bought faux Clemson jerseys and took the field pretending to be the Tigers during a slapstick pregame warm-up routine similar to the 1961 prank.

A few bright engineering students built a portable mound the exact size of The Hill for a classic Clemson entrance.

C.J. Spiller returned the opening kickoff for a Clemson touchdown.

So 1987: The Gamecocks’ Brad Edwards picked off a Rodney Williams pass and dashed 40 yards down the sideline for a touchdown.

Of course, Steve Taneyhill’s long locks were on display. Brentson Buckner got a kick out of untucking hair from beneath the Gamecock quarterback’s shoulder pads after a sack.

Taneyhill enjoyed signing his name on the orange Tiger paw painted at midfield.

Alas, because of social distancing requirements, media credentials to Big-Secret Thursday were limited to active Palmetto State sports reporters who had been covering these programs since 1986. What an honor to get the seat in a press box the size of a phone booth.

Well, too many former proud Tigers and defiant Gamecocks are around to see a 111-year streak end.

That includes running back Tavien Feaster, who played Thursday for both teams.

Clemson’s Rod Gardner pushed off against Andre Goodman but got away with a 50-yard catch.

Mike Williams caught a pass from Watson and carried a South Carolina defensive back almost 10 yards into the end zone.

Spencer Lanning, who grew up hoping to play for Clemson, kept the Tigers backed up with booming punts for the Gamecocks.

Thanks to Tim Bourret, the renowned Clemson sports publicist of 40-plus years. He stopped by with fresh data: South Carolina-Clemson entering 2020 was the second-longest uninterrupted major college football series, bested only by Minnesota and Wisconsin playing for Paul Bunyan’s Axe. With the Gophers-Badgers series a COVID casualty this week, the Tigers and Gamecocks missed a shot at No. 1.

You could tell the former coaches were having a swell time.

Danny Ford insisted that Clemson come out in orange pants.

Steve Spurrier found success against Clemson even subbing Dylan Thompson in at quarterback when Connor Shaw was a last-minute scratch.

Will Muschamp so enjoyed the Thursday kickoff. He reminded everyone that “Thanksgiving is a meal, not a day.”

Dabo Swinney was busy and couldn’t make it. But the Clemson head coach sent both his regards and a truckload of his wife Kathleen Swinney’s Krispy Kreme Casserole as a postgame treat for everyone.

Note: The Minnesota-Wisconsin and Clemson-South Carolina series will not continue in 2020; the Wake Forest-N.C. State and Kansas-Kansas State games have been played in 2020.