Domonique Thomas, a star running back at Ohatchee (Ala.) High School and Union College in Kentucky, is flanked by his mother Ebonique (left) and grandparents Willie and Barbara Harris. The three Thomas family members were killed in a March 25, 2021, tornado that hit Ohatchee. Thomas plans to continue his football career at Clemson. Photo provided 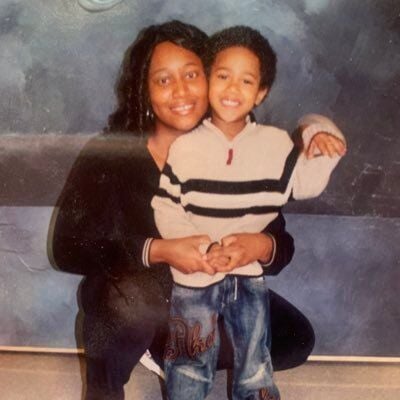 Domonique Thomas' late mother Ebonique regularly attended all of her son's sporting events, including Union College football games just before she died along with her parents in a March 25, 2021, tornado in Ohatchee, Ala. Photo provided 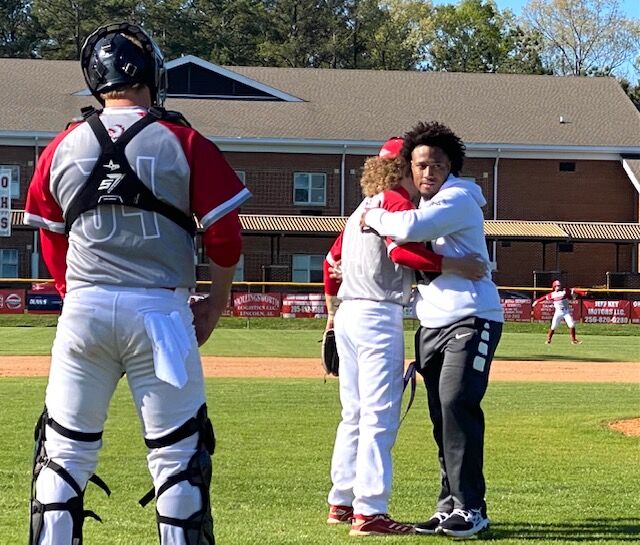 Domonique Thomas, whose mother and grandparents were among five victims of a deadly tornado that hit Ohatchee, Ala., on March 25, 2021, is embraced by former Ohatchee High School teammate Konnor Baswell after throwing a ceremonial first pitch in April. The school donated proceeds from the game and other collections to local tornado relief. Thomas, a running back who played in 2020 at Union College in Kentucky, plans to play football at Clemson in 2022. Al Muskewitz/East Alabama Sports Today 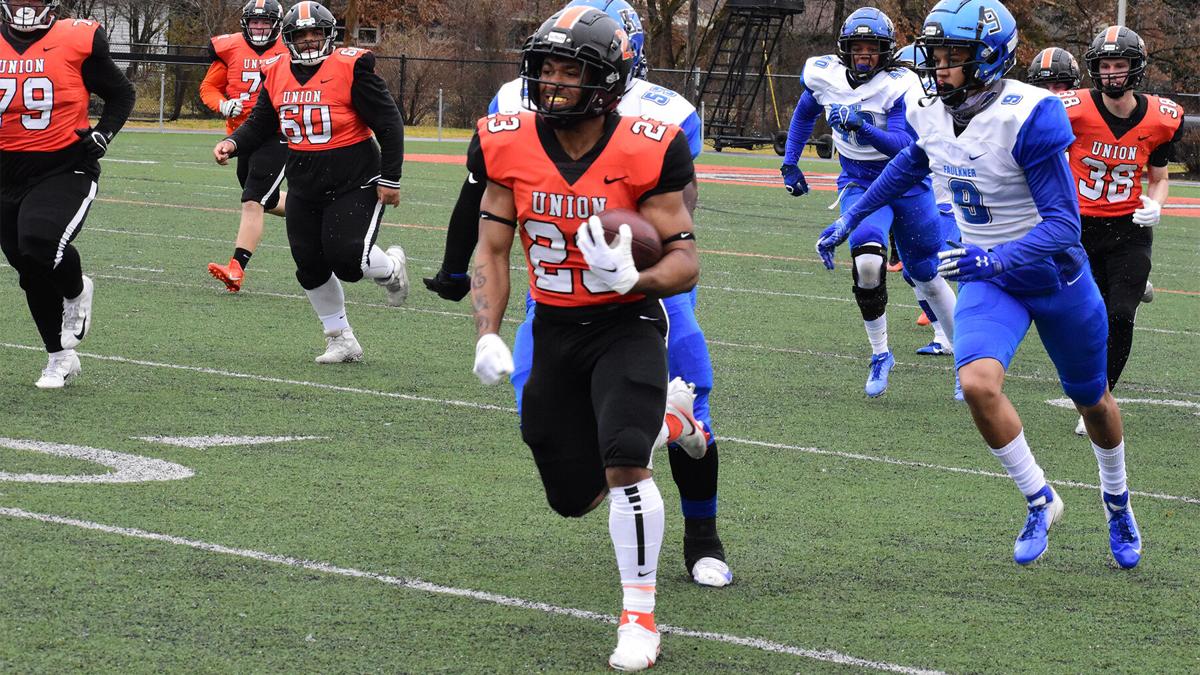 Domonique Thomas at Kentucky's Union College was named the Mid-South Conference's Appalachian Division Offensive Freshman of the Year for the 2021 spring season. In six games, he rushed for 528 yards, caught 33 passes, returned five kickoffs and scored seven touchdowns. Thomas plans to enroll at Clemson in January of 2022. Union College photo

Domonique Thomas found military dog tags and not much else amid the scant rubble of his Ohatchee, Ala., home obliterated by a tornado. It killed his mother and grandparents and seriously injured his younger sister.

The 19-year-old college running back continues to find solace in a community that crossed racial divides while coming together as never before following a March 25, 2021, storm that left five dead in the small East Alabama town along the Coosa River northwest of Anniston.

Leatherwood Baptist, one of the largest White churches in the area, stepped up to accommodate the huge crowd. The Black congregation of Ebenezer Baptist handled a public viewing.

Oak Bowery Baptist Church donated three plots in what was, before the storm, a predominantly White cemetery.

A GoFundMe page was immediately launched.

Thomas, in the midst of an outstanding spring football season at Union College in Kentucky when the tornado hit, threw out a ceremonial pitch at an Ohatchee High School baseball game that doubled as a storm survivor fundraiser. Players from the visiting team, Piedmont High, contributed a wad of $5 and $10 bills pulled out of their baseball pants pockets.

Everyone was awed by Thomas’ courage as he hugged townsfolk and former Ohatchee classmates before and after the first pitch.

“The kind of community support I got that day,” Thomas said by phone on June 24, “meant more than the cheers I got after any touchdown I ever scored at Ohatchee or in college.”

He heard Thomas’ mom called Domonique just before a Union football game to say she wouldn’t be able to attend because of an approaching storm.

And that Ebonique Thomas had seen her son play a few weeks earlier, when he rushed for 222 yards and caught six passes in a Union College victory at Point University.

Swinney has welcomed the 5-8, 195-pound running back/slot receiver after his request to walk on at Clemson.

Thomas needs to tie up some loose academic ends this fall but plans to enroll in January of 2022. He was encouraged by a Clemson meeting with Swinney in early June.

“It was pretty awesome,” Thomas said. “Coach Swinney talked to me for a long time about everything that happened with my mom. He told me his dad was up there with my mom. He told me if I leave the Clemson program as only a better football player, that he didn’t do his job as a coach. He said he wants to help improve my life as well.”

Swinney, 51, was a walk-on wide receiver at Alabama who wound up starting on Gene Stallings’ Crimson Tide team that won the 1992 national championship.

They include, but are not limited to …

• Daniel Rodriguez. The 5-8 Army veteran played on special teams and at wide receiver for Clemson after being awarded a Bronze Star and Purple Heart for his service in Afghanistan. He scored a touchdown against The Citadel on Clemson’s Military Appreciation Day in 2013.

• Nolan Turner. The son of Kevin Turner, Swinney’s former Alabama teammate and an NFL veteran who died of Amyotrophic Lateral Sclerosis (ALS). Nolan Turner’s only other major college scholarship offer coming out of Vestavia Hills High School outside Birmingham was from UAB but a Clemson shot led to 2020 second-team All-ACC honors at free safety.

• Kevin McNeal. The walk-on freshman running back from Tuscaloosa, Ala., joined the team in January. He’s the son of Kareem McNeal, an Alabama teammate of Swinney’s who was paralyzed in a 1995 auto accident.

Enter Thomas, full of answers that begin with “Yes, sir” or “No, sir.”

“I’ve never met Coach Swinney but I am well aware of him. He’s a good man besides being such a great coach,” Union College head coach John Luttrell said. “I know one thing, they’re getting a great kid.

“And Domonique, in his mind, wants to try to make it to the next level.”

Indeed, Swinney bristles if someone suggests some roster spots are charity cases.

“There’s a lot of people that think we just do favors,” he said the morning after Turner made a big fourth-down tackle in Clemson’s national championship victory over Alabama in January of 2019. “… We don’t sign people we don’t think bring great value to our program.”

Thomas as a freshman in six 2021 spring games at Union College rushed for 528 yards, caught 33 passes, scored seven touchdowns and returned five kickoffs. He was named the Mid-South Conference’s Appalachian Division offensive freshman of the year.

‘It doesn’t surprise me’

She loved volunteering for service projects.

But rarely missed a chance to watch her children play sports.

“I’m doing alright. I’ve been training a lot and keeping myself busy,” Thomas said. “My mom raised me to be strong-minded so that’s what I’ve been trying to do. I’m not letting adversity destroy me.”

Thomas’ grandparents were ever-present, too. Willie Harris, his grandfather, loved the way Thomas evaded tacklers on the football field. He nicknamed his grandson “Boogie.”

The Union College football team was on a bus headed from Barbourville, Ken., to Laurinburg, N.C., for a March 26 game against St. Andrews when the tornado touched down in Ohatchee at approximately 3 p.m. on March 25 (the football game was canceled because of bad weather in North Carolina).

Thomas received the worst news of his life from a former high school football teammate on duty as an Anniston firefighter.

More calls poured in, including from current and former Ohatchee football coaches.

“To go through what Domonique has been through, to basically lose half his family in one day and yet be so resilient, it’s inspiring to all of us,” Luttrell said. “But it doesn’t surprise me; he has such a strong work ethic and moral compass about his life.”

Luttrell and his wife gathered clothing, other items and money donated from Union College people. They drove to Ohatchee to meet with Thomas and his father.

The hardest part was a Thomas-guided tour of the Grayton Road property where his mom and grandparents died.

“I’d seen pictures,” Luttrell said. “But until you were there on the ground, it was hard to comprehend the severity. There was almost nothing left but the foundation. You could see parts of the house in the woods about 200 yards away.”

Drone shots on YouTube taken by storm chasers are confirmation.

The randomness is striking, homes wiped away, others across the street almost untouched.

“Domonique told me that when storms came his mother always made everyone put helmets on,” Luttrell said. “He guesses that this storm hit so fast she only had time to get a helmet on his sister and put her in the bathtub.”

Ontarriah Braxton, Thomas’ sister and a seventh-grade softball player, was injured and required surgery for a vertebrae injury.

Both siblings are living with their father.

The current Clemson head coach is from Alabama.

A determined running back from Grayton Road is on the way.

When Domonique Thomas threw out that ceremonial first pitch at the benefit Ohatchee High School baseball game in April, he was wearing his mother’s military dog tags found in the mess once home to a happy Alabama family.

He says he’s never taking them off.

Domonique Thomas and his younger sister lost their mother and grandparents in a tornado that hit Ohatchee, Ala., on March 25, 2021. Thomas plans to enroll at Clemson in January of 2022 and play football.

A GoFundMe fundraising page can be found here