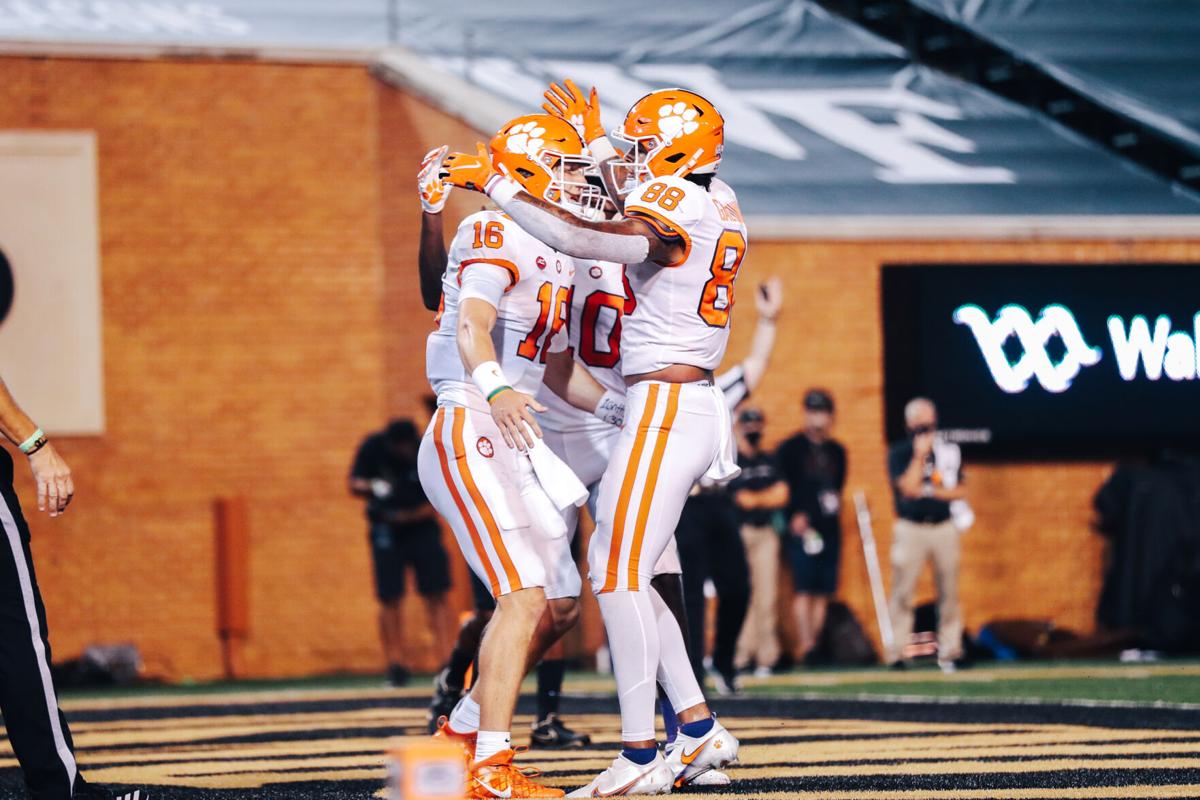 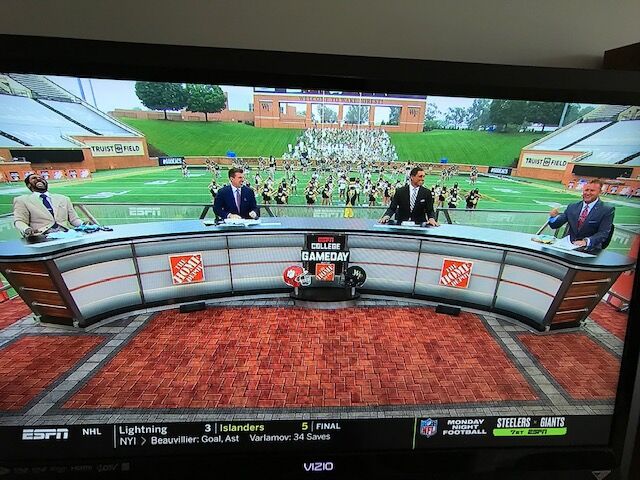 ESPN College GameDay at Wake Forest on Sept. 12, 2020, had live analysts and a real band and cheerleaders but fake fans in the background. Gene Sapakoff/Staff

No fans at Wake Forest meant no booing when No. 1-ranked Clemson got away with pass interference on former Oceanside Collegiate Academy quarterback Sam Hartman’s first long pass.

But there was actual football Saturday, starting just after ESPN College GameDay wound up at noon in Winston-Salem and lasting into a Coastal Carolina-Kansas game that went way after midnight.

How ‘bout that Trevor Lawrence and Travis Etienne?

Lawrence, Clemson’s All-Planet quarterback, ran untouched for two first-quarter touchdowns in a 37-13 victory because defenses must focus on Etienne, the two-time ACC Player of the Year, and other stars.

Doesn’t that 2019 Fiesta Bowl seem like it was a decade ago?

Doesn’t it seem like more than a just month ago that the Pac-12 and Big Ten stopped trying to have a fall season — citing coronavirus concerns — while the ACC, SEC, Big 12 and others kept going?

Sure, there was no pep rally at Notre Dame before the Duke game. But it still counts as an authentic ACC game.

Whoever thought there could be an ACC game in the Big Ten footprint?

That had to be hard to watch in Iowa City, Ann Arbor and Lincoln.

We know. There is no guarantee this pandemic experiment will last a whole season ... or a month. Virginia Tech’s first two games have been postponed because of COVID-19 problems. Georgia Southern had 33 players out Saturday because of virus, injury and disciplinary issues.

Will teams that struggle early have players opt out?

Will ESPN’s Lee Corso continue to do GameDay from the back porch at his Florida home, as he did Saturday while someone dressed in a Wake Forest Demon Deacon outfit watered the plants?

Will Brutus Buckeye get to water those plants?

But Lawrence was happy that Clemson played so fast (82 plays after the Tigers' averaged 71 per game in 2019). And he had a blast in Winston-Salem, fans or not.

"We were just excited to play," Lawrence said. "We've been waiting for a long time. We really just cherish these opportunities, especially when this whole off-season it was up in the air if we were going to get to play. We were just grateful."

Clemson crushes Wake Forest in football season opener unlike any other

Did you see how much fun the Tigers were having at Wake Forest?

Maybe Pac-12 and Big Ten school presidents are right in predicting that a fall season won’t work. But they pulled the plug too early, don’t you think?

Or as North Carolina head coach Mack Brown said Saturday after a win over Syracuse: “Thank goodness we got to play.”

About 15 minutes from kickoff at Kenan Stadium, and it’s the oddest of vibes, while a college football season begins without spectators. pic.twitter.com/6f3kVvR9kJ

Maybe Iowa State’s socially-distanced band wasn’t Stanford-quality Saturday, but it sure beat the sound of silence from Pullman to Tucson.

If it’s no longer fun making fun of the Big Ten, at least they appear to be trying to make football happen.

True, the political climate is different on the West Coast. Football people must abide.

Sapakoff: 'Everyone has to be ready to play' in COVID college football, including walk-ons

Also true: the Dodgers and Padres and 49ers and Seahawks and Cardinals sure look interesting.

So Stanford coach David Shaw’s upbeat take on the possibility of daily testing in the Pac-12 has to be exciting.

Alas, the sun always rises earlier in the SEC, where coaches caught glimpses of Saturday’s games while preparing for their Sept. 26 openers.

But, unlike you guys and Charleston Southern and S.C. State, The Citadel marches on.

Willie Eubanks III, reigning SoCon Defensive Player of the Year, led a Bulldogs’ effort that gave South Florida fits for most of a 27-6 loss Saturday night in Tampa.

My friends and I are really looking forward to three more games: a trip to Clemson next week, a home game against Eastern Kentucky on Sept. 26, a game at Army on Oct. 10.

Say “hi” to your favorite mascots!

Too bad you won’t get those non-conference opportunities against Big Ten teams. Fewer fans mean less noise, as three of our teams found out while pulling road upsets Saturday.

Coastal Carolina won at Kansas for the second year in a row.

Billy Napier, the former Furman quarterback and Clemson offensive coordinator, led Louisiana to a win at No. 23 Iowa State.

You started this back in early July, becoming the first NCAA Division I conference to suspend football.

Fine. Few leagues can tap into as many nearby medical experts.

It’s also true that college football players are being asked to save school budgets, athletic department funding, TV networks and the gambling industry.

But the Ivy League opt out didn’t start a national debate about exploited athletes and hypocritical universities that put athletics over academics.

That started soon after the first Harvard-Yale meeting in 1875. It’s been going on ever since.

Here’s to more 2020 progress on “Name, Image and Likeness” compensation and other players’ rights momentum.

And to an entertaining football season without serious health damage that doesn’t blow up before the start of the NBA Finals and lasts well beyond Thanksgiving.