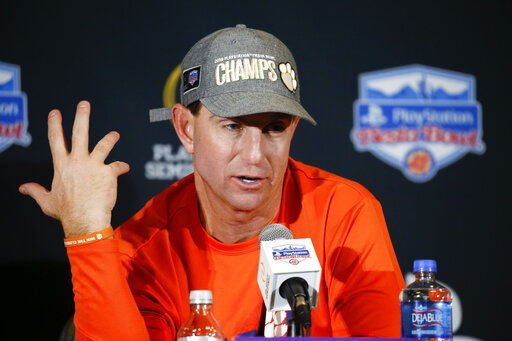 Clemson coach Dabo Swinney speaks during a news conference after the team's 29-23 win over Ohio State in the Fiesta Bowl on Dec. 28, 2019, in Glendale, Ariz. Ross D. Franklin/AP 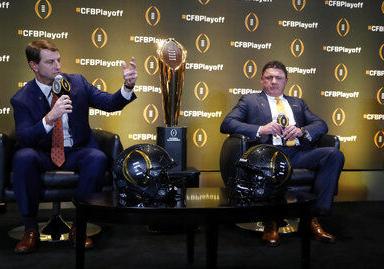 GLENDALE, ARIZ. — If you loathe Clemson head coach Dabo Swinney’s “we don’t get any respect” tour of a college football world he gets paid handsomely for ruling, you’ll want to load up on gumbo supplies and hop aboard the LSU bandwagon.

Or, in this case, a streetcar named Burrow.

The deck wasn’t so stacked against Clemson at the Fiesta Bowl on Saturday night (though a Phoenix Zoo orangutan picked Ohio State, only to have other incarcerated animals snicker at the prediction following the Tigers’ 29-23 College Football Playoff semifinal victory).

But it will be different at the national championship game, a custom-tucked scene for Swinney’s underdog dogma.

• LSU is ranked No. 1, not the defending national champs.

• The game is in New Orleans, not Spartanburg. The Superdome is 81 miles from LSU’s version of Death Valley but seemingly much closer via a trail of beignets.

• Swinney is an Alabama alum, which means he’s a sworn enemy of all Bayou Bengals.

• LSU is favored, with the betting line at 5.5 points and rising on Sunday.

Swinney can wear orange in a Gulf Coast tide full of purple and gold while his team gets inspirational messages behind the scenes.

“We reminded our guys that they’re the champs until somebody knocks them off,” he said.

The reminder echoes from the Arizona desert to the French Quarter.

Brent Venables, the supreme strategist who runs the Clemson defense, was asked about Burrow’s remarkable season that includes seven touchdown passes in a 63-28 victory over Oklahoma in the Chick-Fil-A Peach Bowl.

“Sickening to watch,” he said with a respectful grin. “I can’t think of that right now.”

But Venables was beaming with pride while evaluating his “neat group” of players on a defense he was “pretty skeptical about” entering the season.

“They have responded,” he said, “every single time.”

Part of the winning formula is a trust bond Swinney and his coaches have formed with players that translates into players trusting each other.

This was the give and take between Swinney and quarterback Trevor Lawrence talking about a 34-yard pass to running back Travis Etienne that stood up as the game-winning touchdown.

Lawrence: “Honestly, I wasn't a big fan of the play in practice, because it's tough if the defense doesn't really bite on it and that safety comes down hard. It takes it away. … I was like, ‘I don’t really like this play.’”

Swinney: “Is that why you threw it in the dirt two or three times? I made him reload it, like, three times.”

Drilling down into Dabo’s disrespect tour is dicey.

Does the guy who makes $9.3 million a year for leading Clemson to playoff games and hoisting trophies every season really feel like a second-class football citizen?

Three reasons, not necessarily in order, to believe Swinney is truly irritated:

1. He still hates the popular low-brow reaction to Clemson’s 21-20 escape at North Carolina on Sept. 28; he thinks a conference road victory should have been applauded not ridiculed.

2. He wants critics of Clemson’s schedule to know the Tigers had no control over how good or bad Syracuse and Boston College were this season. But that Clemson won its 14 games by an average of 33.8 points.

3. What? Clemson is undefeated this season coming off a historically great 44-16 pummeling of Nick Saban’s Alabama powerhouse? Yet isn’t the No. 1 seed in the 2019 College Football Playoff? And therefore didn’t get to play a semifinal game in Atlanta, which would have made Christmas celebrations with family so much easier for the Tigers traveling party?

Or is it all an act?

Whatever it is, the target audience is strictly confined to the Clemson locker room and that’s where the Swinney stuff works.

Clemson this season has not faced a player nearly as good as Ohio State's All-America defensive end Chase Young, but the Tigers have conquered NFL-ready talent in College Football Playoff games before.

So never mind that the late Aretha Franklin’s sweet booming plea for “Respect” is aimed more at the complexities of a relationship dynamic than college football pecking order. That’s the song that was blaring in the visitors’ locker room at State Farm Stadium late Saturday night.

That’s surely going to be Swinney’s hard take in The Big Easy.

Jake Fruhmorgen started at right tackle for Clemson the first eight games of the 2016 season. Then he mysteriously left the team, which went on to win the national championship.