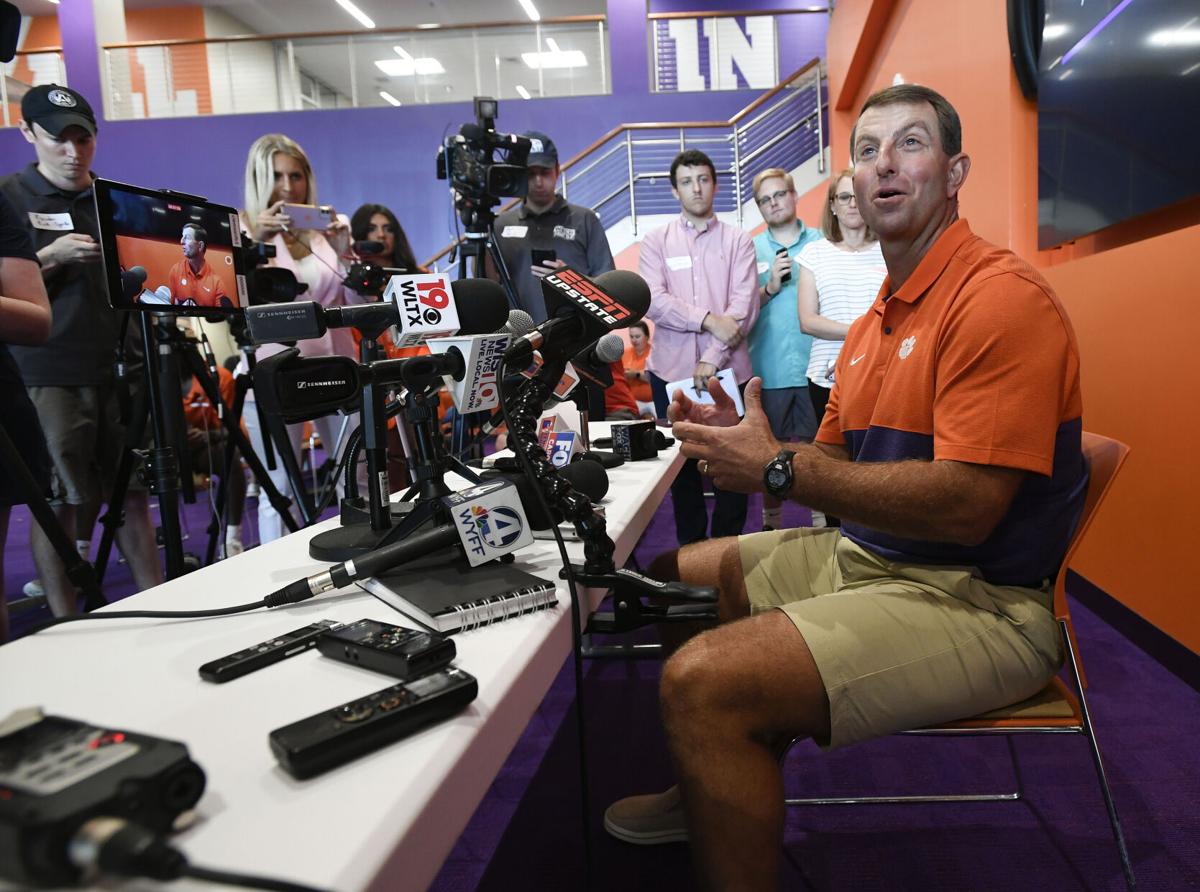 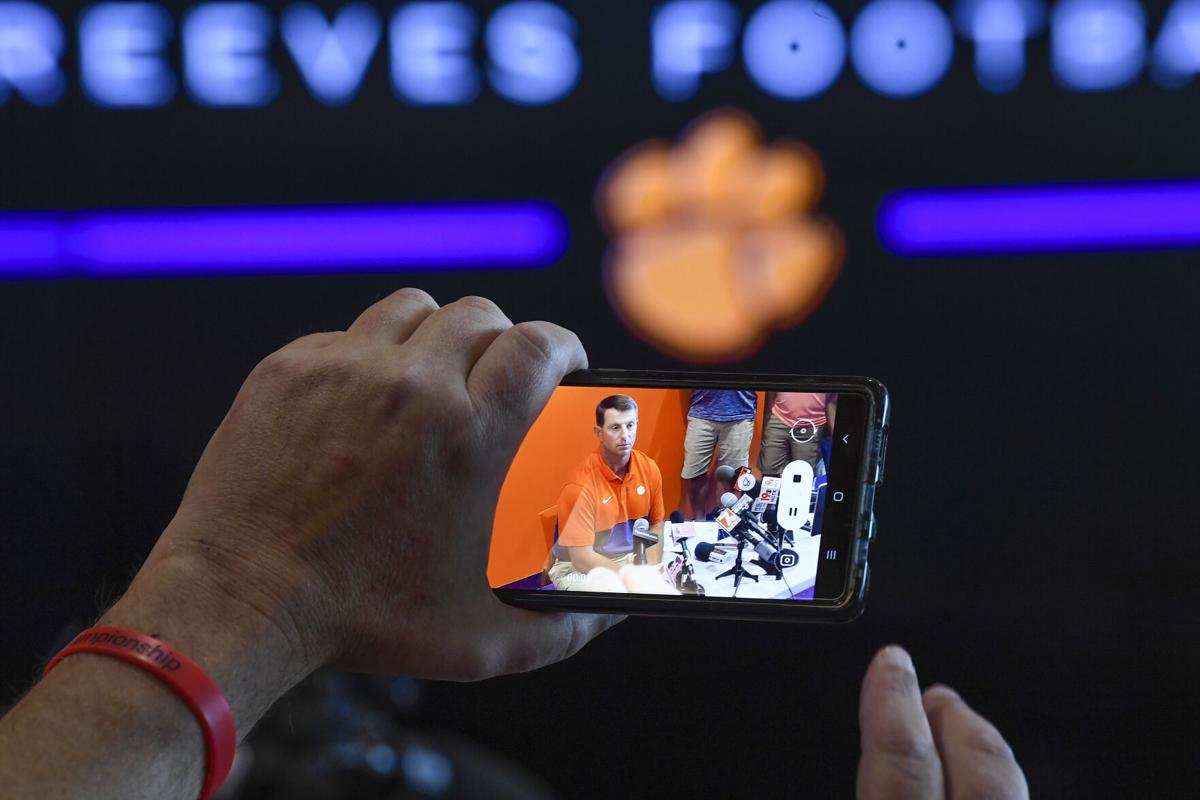 CLEMSON – There was no official ceremony. The title is adjustable. But no question about the timing.

William Christopher Swinney (aka the ACC’s unofficial/primary/go-to coach spokesperson, aka Dabo) takes to the podium in 2021 amid unprecedented tumult.

Roy Williams has retired as North Carolina basketball coach and Mike Krzyzewski will enter his final season as Duke basketball coach, and so everyone wants to know what Dabo thinks about Name, Image and Likeness, the transfer portal and COVID-19 vaccinations. Plus, the proposed 12-team College Football Playoff.

Not necessarily in that order.

Other football coaches in July mostly get asked about their linebacker room.

Swinney, 51, has been in the sport almost every season since first taking the field as an Alabama player in 1990. But it’s as safe as a North Pole weather forecast to say there have been more changes in college athletics in the last year than in any other two decades combined.

Not surprising then that so many big-picture subjects came up July 20 as Swinney addressed the media in Clemson ahead of his July 22 appearance at the ACC Football Kickoff in Charlotte.

And just for fun, try taking a swig of your favorite beverage every time Swinney says “unintended consequences.”

As for the great NIL unknown that began unfolding with the NCAA’s July 1 blessing of way overdue opportunities for college athletes to finally get a piece of the marketing pie, Swinney loves the idea.

For instance, a player being able to run a hometown youth football camp for profit.

“There’s a lot of those things that make a lot of sense,” he said. “But there’s some unintended consequences that will come along the way. There’ll be some silliness along the way.”

Most coaches want to control schedules.

Then there’s the Twitter flak Swinney took in June when NIL became NCAA law, because of this 2014 take: “But as far as paying players – professionalizing college athletics – that’s where you lose me. I’ll go do something else because there’s enough entitlement in this world as it is.”

That was about athletes as university employees, not NIL. But the comments were also reposted in 2019 when Swinney signed a 10-year, $93 million contract

“We live in a world now when not everybody does their research,” Swinney said when reminded of his statement. “You go in the bathroom and you hear somebody in the third stall and that’s your source. … And that’s the headline.”

He doubled down on standing against “professionalizing college athletics.”

But stressed that NIL isn’t just a good thing, that it should have even more benefits for athletes.

Which begs for elaboration.

The first few years of the transfer portal, Swinney said, “are about what I thought it would be: crazy.”

That’s similar to what SEC commissioner Greg Sankey said July 19 at SEC Media Days when revealing that 13,000 athletes entered the transfer portal across all sports with 11,000 remaining.

“Because if they’re good, somebody’s just going to sign them right off your roster,” Swinney said.

And it’s much easier to build with transfers more suitable to team needs.

Clemson has yet to dip into the portal but Swinney’s staffers regularly monitor what’s available.

The mantra from Swinney sounds familiar: the vaccine is safe and effective and shouldn't be about politics, and if you don’t believe me, consult experts.

ACC people are well aware of N.C. State getting sent home from the College World Series semifinals. Clemson players know the Tigers’ lone regular-season loss of 2020 came at Notre Dame when star quarterback Trevor Lawrence was out with COVID-19.

“Our team is in a good spot (vaccination numbers-wise),” Swinney said. “Not quite where we need to be but I think we’ll get there.”

Cheaper by the dozen

If Swinney liked the two-team Bowl Championship Series model for crowning a college football champ better than a four-team playoff, you probably know what he thinks about “the unintended consequences” of the officially proposed 12-team playoff.

“The more you expand it, the less important the season becomes,” Swinney said.

Wearing orange-colored glasses during the Tigers’ six straight years in the playoff with two national titles probably prevents Swinney from tracking all the player opt-outs in non-playoff bowl games the last few years.

But he insists he’s just an old-school guy looking out for the game. And that there aren’t 12 teams good enough to be included in a playoff.

Which means Swinney’s status as ACC spokesperson will go on until he retires.