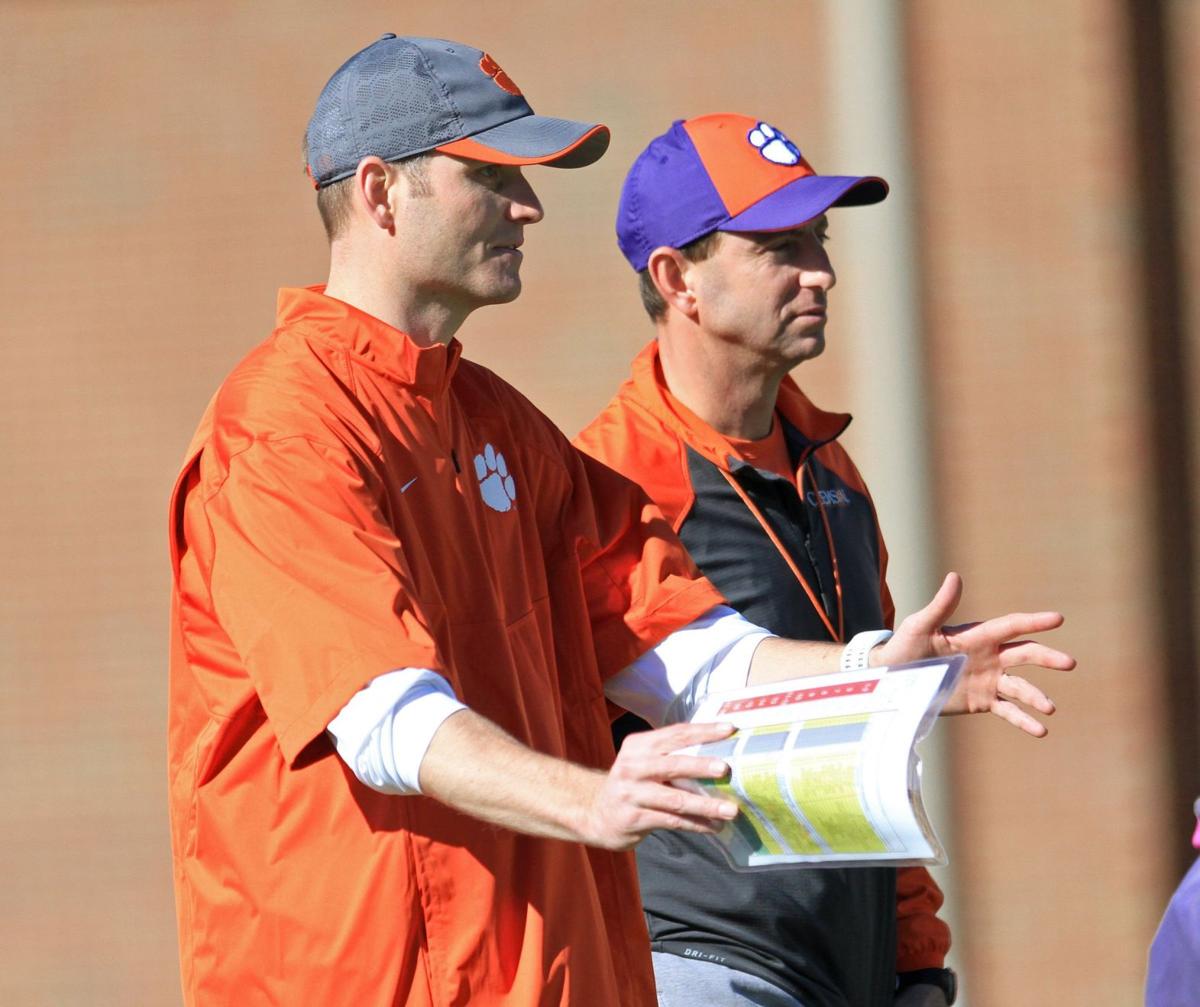 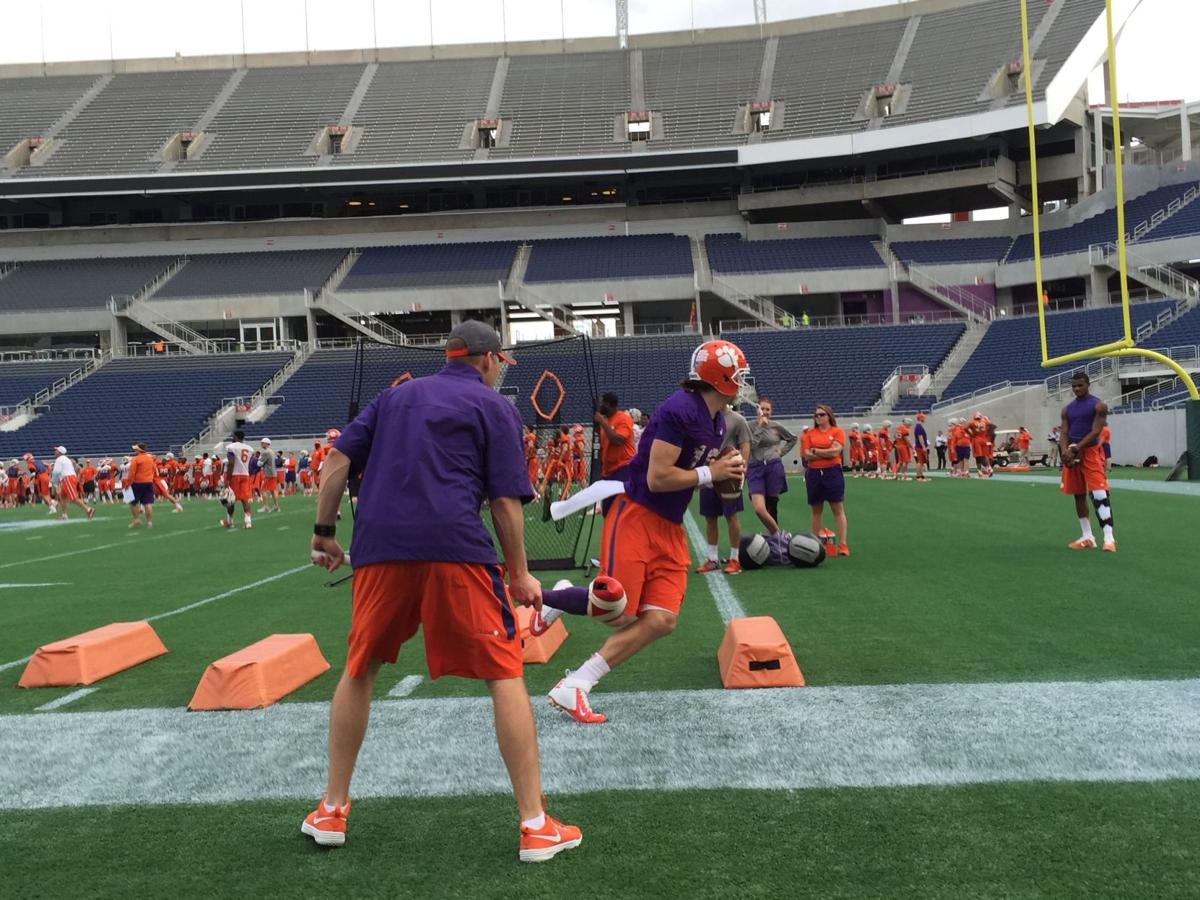 Brandon Streeter (left) made his debut as Clemson quarterbacks coach at the 2014 Russell Athletic Bowl where quarterback Cole Stoudt (right) won an MVP award in a 40-6 rout of Oklahoma. Here, Streeter watches Stoudt in pregame drills in Orlando. File/Staff 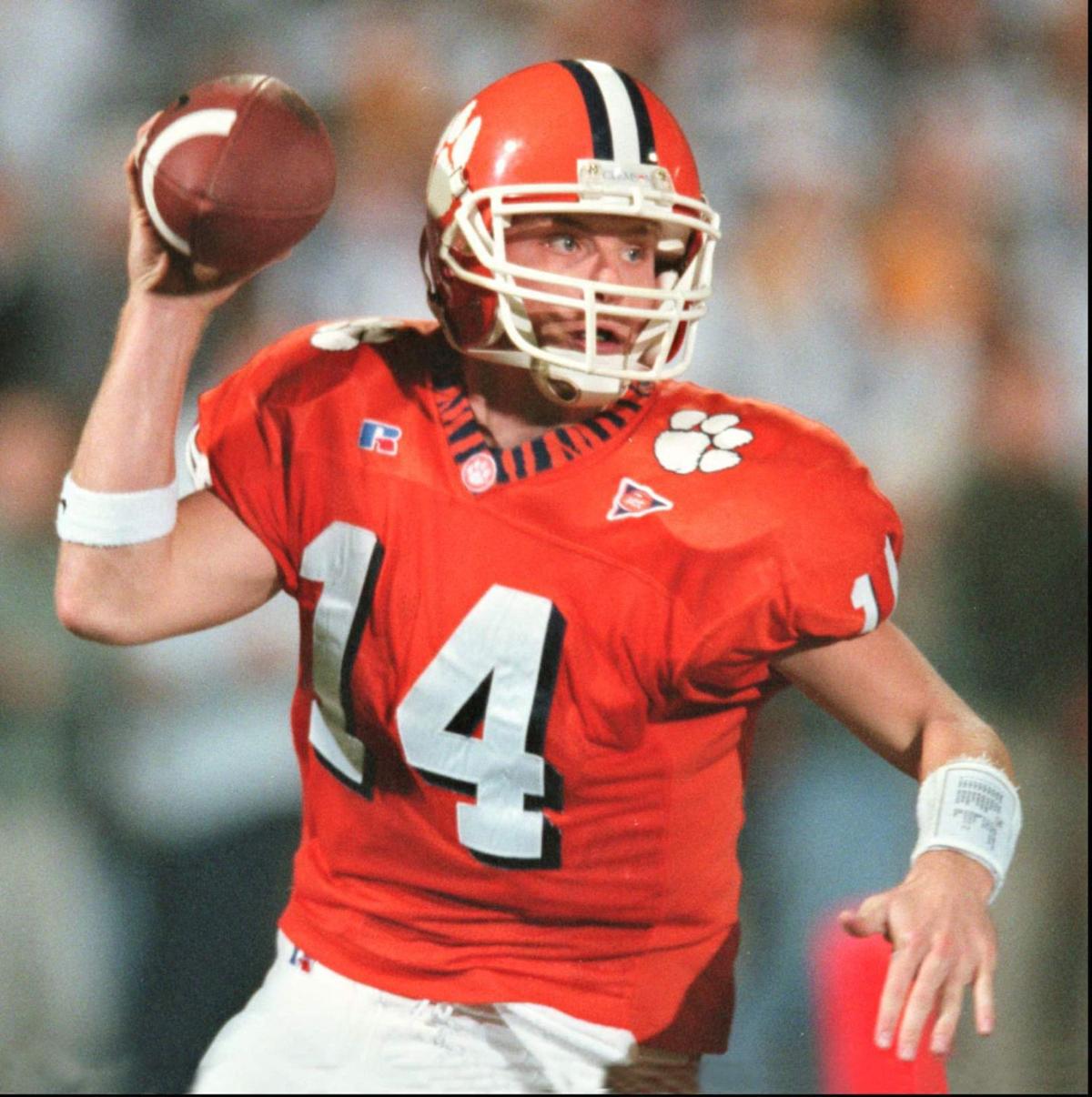 Probably something that requires no more heavy lifting than serving as Clemson quarterbacks coach while mega-stars Deshaun Watson and Trevor Lawrence are the quarterbacks.

And you thought the publicist for “Hamilton” had it easy.

And yet Streeter, 42 and married with three kids, is one of the most underrated assistant coaches in college football. He is a quarterback whisperer who gets the best out of his players — Sports Illustrated cover subjects Watson and Lawrence and also less-heralded projects such as Cole Stoudt, Kelly Bryant and Chase Brice.

This teacher works in the shadows, partly because Tony Elliott and Jeff Scott are such capable offensive co-coordinators. Also because head coach Dabo Swinney allows his non-coordinator assistant coaches to speak to the media just once per season.

But respect for Streeter bounces from campus to the NFL.

That started in Gettysburg, Pa., where Streeter learned the game from his father, Barry Streeter, who recently retired after 39 seasons as head coach at Gettysburg College. From there, Clyde Christensen took over as mentor, recruiting Streeter to play quarterback at Clemson in 1996.

Christensen left Tommy West’s Clemson staff before Streeter took the field in 1996, but not before the two connected.

“Brandon was a fine young man when he was in high school. Has a great dad. Great mom. Is a great guy,” Christensen said. “He was the ready-made package. But even then you knew he would probably be a better coach than a player. He was really smart, he was a people person and he was very diligent.”

Streeter kept in touch while Christensen found NFL success as an NFL quarterbacks coach and play-caller with the Tampa Bay Bucs, Indianapolis Colts and Miami Dolphins.

The relationship keeps paying off in purposeful, coincidental ways.

Christensen worked extensively with star quarterback Peyton Manning in Indianapolis while a talented boy in Cartersville, Ga., grew up idolizing the guy who wore No. 16 for the Colts and Denver Broncos.

Streeter gives Trevor Lawrence, Clemson’s No. 16, some of the same tips he learned from talking to Christensen about Manning all these years.

Christensen lately has heard a lot about Lawrence from Streeter.

“It seems like Trevor might be more like (New York Giants quarterback) Eli (Manning) in his demeanor,” said Christensen, who is back with Tampa Bay as quarterbacks coach. “Eli is calm, where Peyton was more of a live-wire all the time. But they’re all winners, and they all value the team aspect of football.”

Streeter makes sure of that.

“The great thing about Streeter is he never looked at Deshaun as Deshaun,” Elliott said. “He doesn’t look at Trevor as Trevor, or not the way everyone else looks at Trevor. He looks at a quarterback that can always be improving. Because of that he’s able to establish that connection and build trust.”

Streeter wouldn’t be intimidated by that.

Streeter showed up this summer at Clemson’s first preseason practice coming off a 15-0, national championship season with a general plan and with plans tailored to each quarterback on the Tigers’ roster.

Streeter has each Clemson quarterback tell the others something new about themselves. Just to break up the monotony of camp.

It’s worked so far. Streeter, who spent the 2002 and 2003 seasons under Jay Mills at Charleston Southern before stints at Liberty and Richmond, made his Clemson coaching debut at the 2014 Russell Athletic Bowl. The underdog Tigers in that game walloped Oklahoma, 40-6.

Brice came off the bench in 2017 to lead Clemson to a critical come-from-behind win over Syracuse last season.

It’s a different set-up Clemson has, for sure.

They have never coached quarterbacks.

But it works, partly because Streeter just smiles when taking the brunt of a barrage of Elliott and Scott jokes about how easy he has it coaching Watson and Lawrence.

“What I really like about Brandon is he’s content,” Christensen said. “Too many times these days guys are working harder at moving up than they do at their jobs. Brandon has the skills to get whatever he wants but he knows God has a plan.”

Offensive coordinator or head coach, eventually. For now, Clemson is fortunate to have one of football’s best quarterback whisperers.

Why Clemson and South Carolina will meet or exceed 2019 expectations, and other Palmetto State college football predictions.