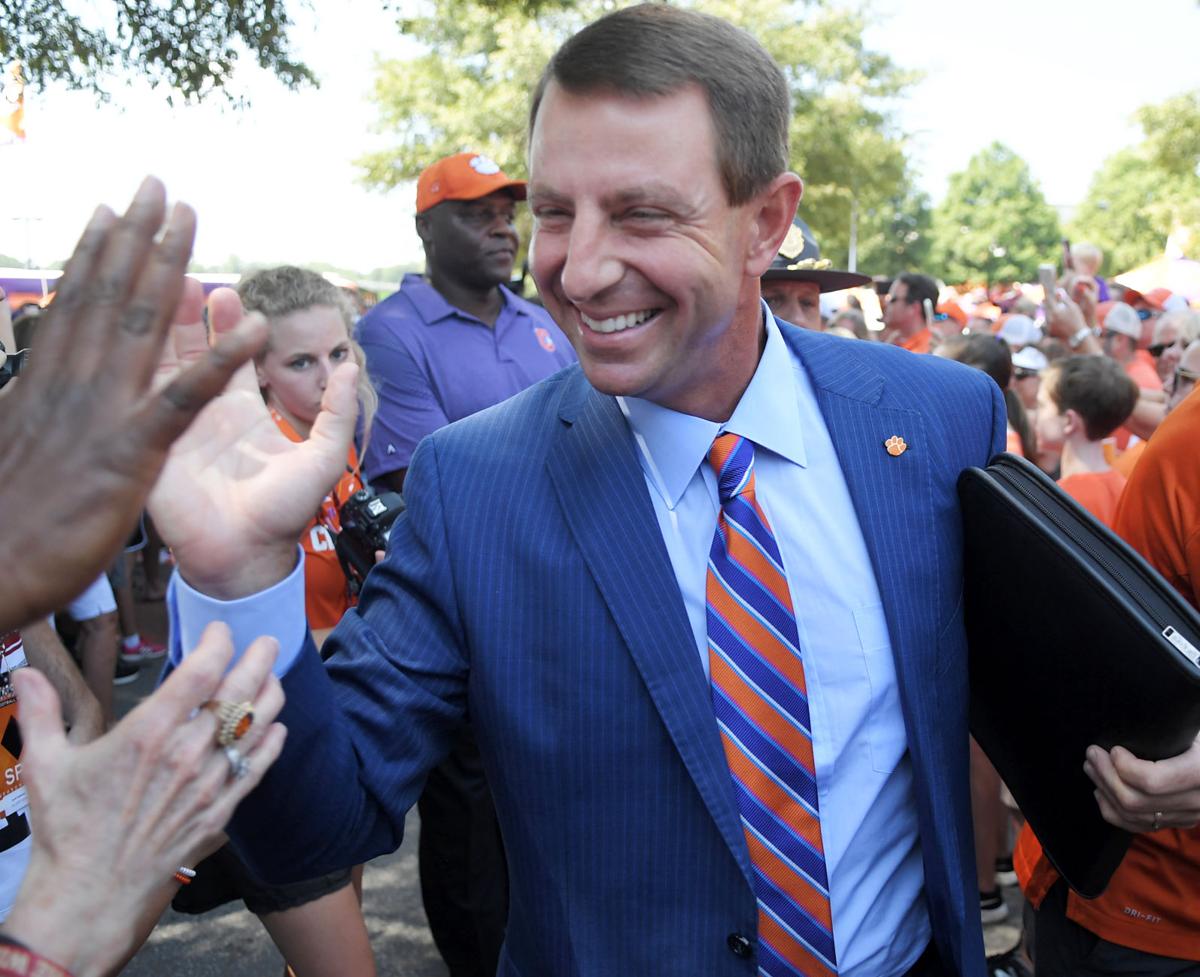 Clemson coach Dabo Swinney maintains a three-ring binder filled with notes, quotes and poems that he began compiling when he realized he wanted to become a head coach. Gwinn Davis/Special to The Post and Courier 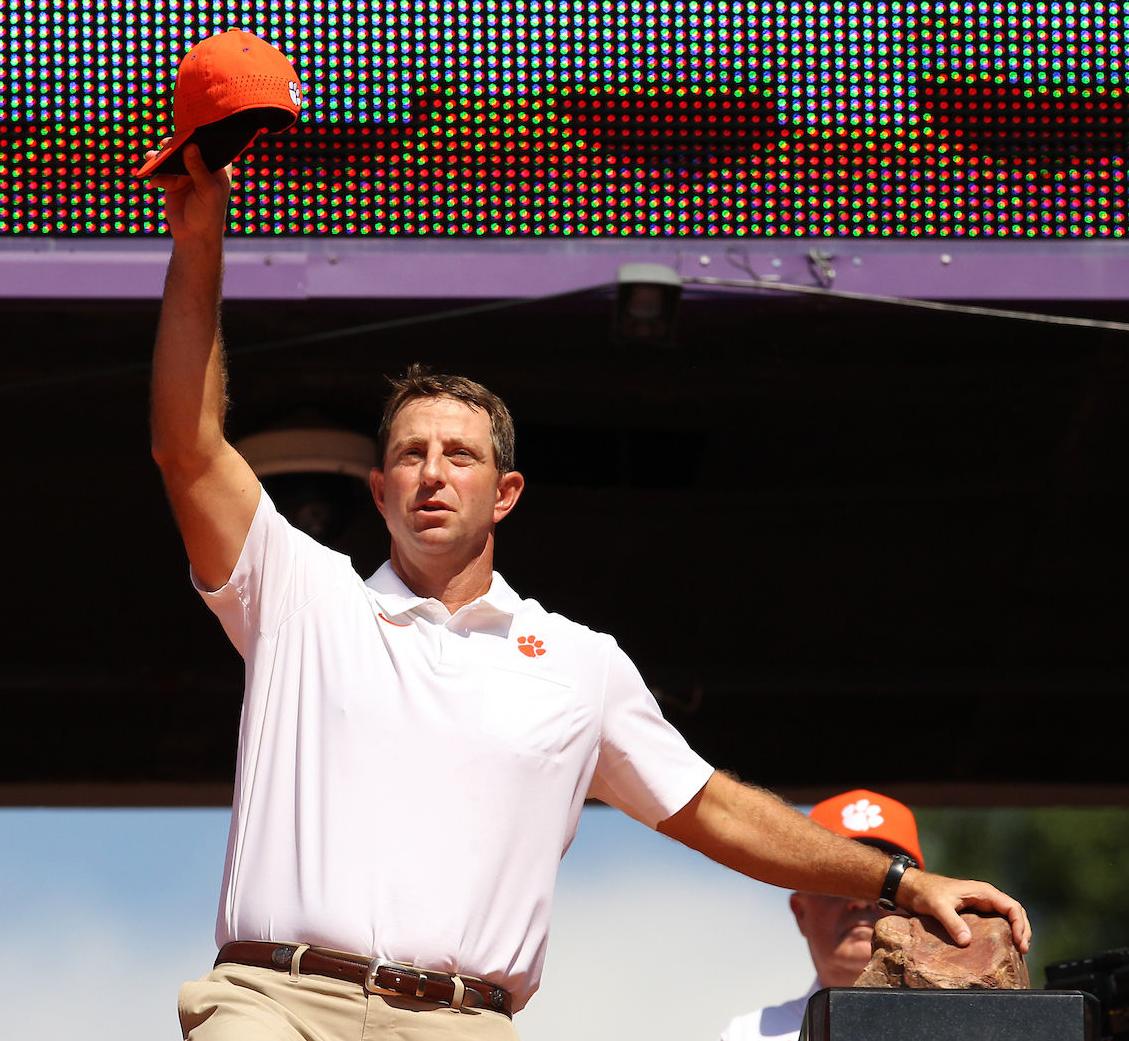 CLEMSON — Dabo Swinney has a soft side. The Clemson coach delights in the sight of a bone-crushing tackle, sure, but he also enjoys diving into a good poem. One of his favorite's is "The Dash" by Linda Ellis:

"I read of a man who stood to speak at the funeral of a friend. He referred to the dates on the tombstone from the beginning ... to the end.

He noted that first came the date of birth and spoke the following date in tears, but he said what mattered most of all was the dash between the years."

The poem is filed away in Swinney's white, three-ring binder, a compendium of knowledge and insight pertaining to life on the gridiron and off. It's worn some over the years; there are so many papers inside the binder's ends no longer touch. But it remains an asset for the Tigers' head man.

Swinney, who has led the Tigers to two of the last three national championships, is one of the most respected voices in sports. Professional and college coaches alike regularly pick his brain, thirsty for some of the wisdom that's guided Swinney in his more than a decade running Clemson's football program. Saturday's home game against Charlotte will mark the 150th game of Swinney's head coaching career.

The physical manifestation of Swinney's philosophy is outlined in the binder, and the 49-year-old said he still has plenty to add.

Clemson's Rodgers got a new tattoo after suffering ACL tear. Its message resonated.

Swinney's resume since taking over the program full time in 2009 is impressive. He has a 119-30 record, five ACC titles and three Paul "Bear" Bryant Coach of the Year Awards.

Before all that, Swinney operated on the outskirts of the sport for many years. He got his start as a graduate assistant at Alabama in 1993, before working on the Crimson Tide staff from 1996 to 2000 as a wide receivers and tight ends coach. He joined Clemson as a wide receivers coach in 2003.

But Swinney wanted more. His goal was to run his own program. He started stocking the binder, hoping to fill it with information his mind would absorb should he one day be offered a head coaching job.

"It's the biggest binder you can ever see," said Will, Swinney's oldest son and a Tigers wide receiver.

Will, a 5-foot-8 junior, is quick to pepper his conversations with smiles and laughter, just like his father, and he's striving to achieve his old man's level of organization. He got a notebook of his own during fall camp and filled up half its pages with notes on the finer points of being a wide receiver and kernels of knowledge about life.

It's a mini version of his father's binder, which is stocked with motivational quotes and poems, recollections of meaningful interactions and more practical items like  'football rules and requirements,' Will said.

Swinney, of course, is an oft-quoted figure himself. He's absorbed the words in his binder and spit out original aphorisms used by other coaches looking up to him. Will admitted it's all a little surreal, but added that his dad's personality hasn't wavered under fame's bright lights.

Perhaps the binder has kept him humble. Shortly after he took over at Clemson, Swinney was asked what he had learned as a head coach. He thought on it. Then he put pen to a sheet of loose leaf paper.

"What I've learned as a head coach," he wrote.

Will has been there for the whole ride. In 2009, his father's first year as head coach, he started maintaining the team's 'touch' chart, which accounts for how many times players touch the ball during the game. He manned the chart for exactly 100 games, the last of which was the 2016 national championship, during which Clemson fell to Alabama, 45-40.

Now Will is a Clemson player himself, along with his younger brother Drew, who redshirted last season, spending the year acclimating to the life of a college athlete.

The Swinney boys' father is still learning, too. In fact, he said Tuesday he recently added a couple of items to his list of things he's learned as a head coach. He forgets about the list sometimes. But then he'll think of something, pull the papers out and jot down some of his thoughts. Swinney's been a head coach for more than a decade. He's running out of space.

"I need another piece of loose leaf," Swinney said.

CHARLOTTE at No. 1 CLEMSON

The Dash by Linda Ellis

I read of a man who stood to speak at the funeral of a friend. He referred to the dates on the tombstone from the beginning… to the end.

He noted that first came the date of birth and spoke of the following date with tears, but he said what mattered most of all was the dash between those years.

For that dash represents all the time they spent alive on earth and now only those who loved them know what that little line is worth.

For it matters not, how much we own, the cars… the house… the cash. What matters is how we live and love and how we spend our dash.

So think about this long and hard; are there things you’d like to change? For you never know how much time is left that still can be rearranged.

To be less quick to anger and show appreciation more and love the people in our lives like we’ve never loved before.

If we treat each other with respect and more often wear a smile… remembering that this special dash might only last a little while.

So when your eulogy is being read, with your life’s actions to rehash, would you be proud of the things they say about how you lived your dash?

Clemson's running of The Hill: Behind 'the most exciting 25 seconds in college football'

A crew of 12 men from Clemson’s athletic grounds crew and athletic facilities crew go unnoticed as they prepare the scene at Memorial Stadium.

Sapakoff: For losing football teams looking for the next Dabo Swinney, here's the formula

Dabo Swinney's Clemson program has become the gold standard for college football success. Here are step-by-step instructions for how to recreate a big-time winner.

Clemson vs. Charlotte: On Dabo Swinney's relationship with 49ers coach Will Healy

The Tigers want to "leave no doubt" in their Week 4 matchup against the 49ers.