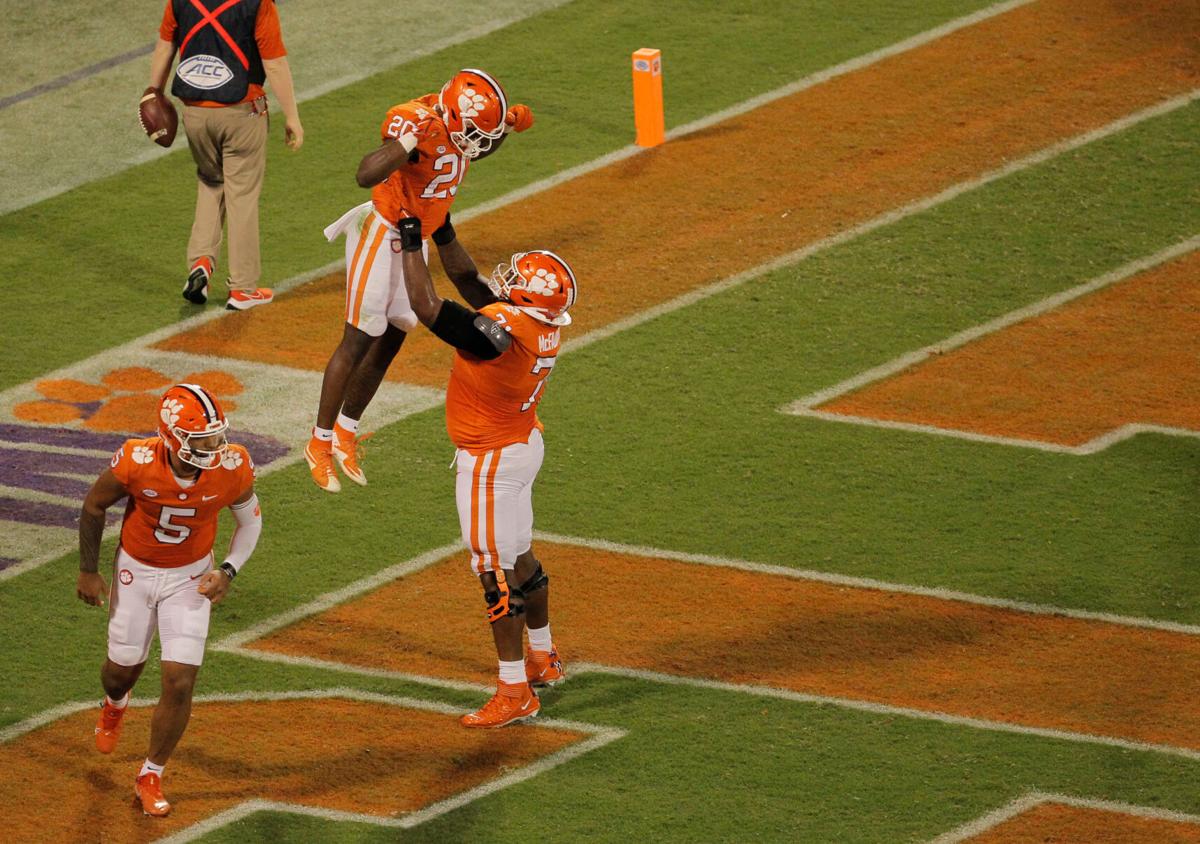 Clemson running back Kobe Pace (20) is congratulated by offensive tackle Jordan McFadden (71) after running 59 yards for a touchdown against Boston College on Oct. 2 in Clemson. Travis Bell/Sideline Carolina 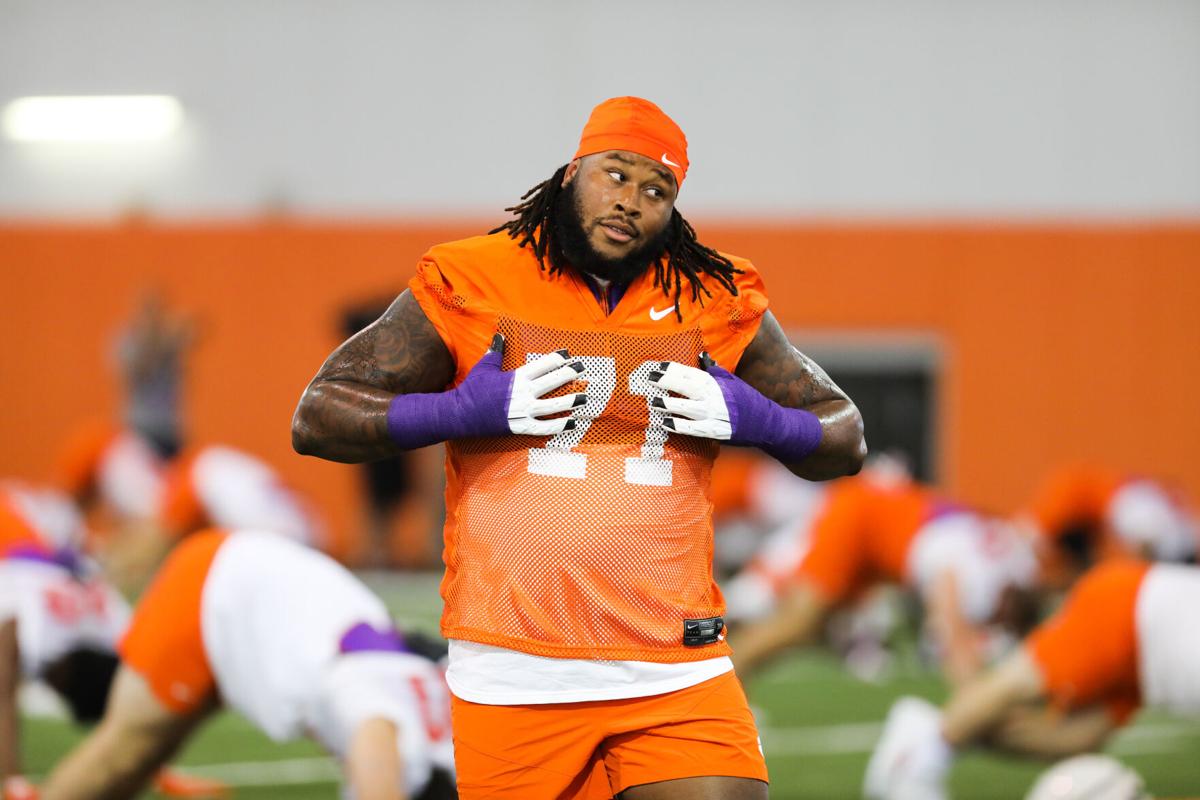 Clemson offensive tackle Jordan McFadden (71) during the Tiger’s fall practice on Aug. 9. McFadden has been a mainstay on Clemson's offensive line this season. Dawson Powers/Special to The Post and Courier

Clemson running back Kobe Pace (20) is congratulated by offensive tackle Jordan McFadden (71) after running 59 yards for a touchdown against Boston College on Oct. 2 in Clemson. Travis Bell/Sideline Carolina

Clemson offensive tackle Jordan McFadden (71) during the Tiger’s fall practice on Aug. 9. McFadden has been a mainstay on Clemson's offensive line this season. Dawson Powers/Special to The Post and Courier

CLEMSON — In hopes of understanding Clemson’s run-blocking breakthrough against Boston College, it could be reasonable to point to pieces in the right places, as if putting Matt Bockhorst back at guard and Hunter Rayburn at center cracked some sacred code.

Only instead of some walled-off chamber sliding open, revealing the lost treasures of Clemson’s past offensive success, it was five guys blasting open holes for Kobe Pace and Phil Mafah on long runs through BC's defense.

But as Tigers’ offensive linemen speak about the joys of leading the way for 231 rushing yards, hoping to carry that momentum forward into a road contest at Syracuse, they aren’t convinced the pieces have as much to do with it as how they relate to each other. The formula for success sounds more like relationship advice than codebreaking.

“Getting the communication down is the key,” Rayburn said.

Once all five linemen are on the same page, it’s a “hat on a hat.”

No defenders are left unblocked.

Sapakoff: Defense travels, unless it's with a sluggish Clemson offense

Those simple procedures are just what the Tigers have been struggling to execute all season. As they explained after a 2-yard rushing outing versus Georgia, or a sub-3.9-yards-per-carry average versus Georgia Tech's three-man fronts, the mental busts that left defenders unblocked in-game weren’t happening in practice. That’s what made it so frustrating.

But that changed versus against Boston College. Even without a steady right guard in Will Putnam, who was out with a toe injury, the Tigers were able to find success with Marcus Tate and Bockhorst at the guard spots and Rayburn at center. That result inevitably leads to questions about whether Bockhorst, who has started dozens of games at guard and just a handful at center, may just be better suited at his most familiar position.

That just means Rayburn, who was in the mix at center in the preseason, would have to stay in the lineup once Putnam returns.

“Hunter has just been staying the course,” McFadden said. “He’s always been a big, strong guy, it was just a matter of doing it. He had a lot of confidence because he was prepared for the moment. It was amazing for him to get in there and just watch him play the way he did.

“Bock’s a competitor. He’s a player. I think you can put Bock anywhere and he’ll get the job done. Being a guard, I think he felt right at home.”

Could the Tigers' blocking woes be this easily solved? In the preseason, Clemson offensive coordinator Tony Elliott did talk about wanting to bring Rayburn “through the knothole,” seeing if he could claim the center spot. The 6-4, 320-pound redshirt sophomore just couldn’t crack the top five.

Rayburn joked he has no idea what coming through “the knothole” means, but he did give Clemson’s coaches something to think about in a 19-13 win. The line, as a whole, didn't break apart once it transitioned to game action.

“We’re all kind of growing up, getting on the same page, getting to the point where it’s starting to carry over,” Rayburn said. “We didn’t get as many points as we wanted to. We left a lot on the table. But the offense performed better."

Seeing Pace bust for a 59-yard touchdown, and Mafah roll on a 28-yard gain, was validating for a Clemson offensive line that has received its share of criticism — and more than likely holds the key to a more consistent offense.

If the line can allow the Tigers’ running backs to pick up yards in chunks, the offense can stay “on schedule” on first and second downs and convert more third downs. That keeps the offense on the field, and the defense off it, reducing the stress on the latter.

Not to mention, if Clemson can run it, defenses can’t just drop everyone into coverage on quarterback D.J. Uiagalelei and exploit his growing pains.

The question is just whether the Tigers can keep it rolling in the Carrier Dome. Syracuse’s defense may have given up 40 points last week, but it did just hold Wake Forest to 2.6 yards per carry. Whether it’s Tate, Bockhorst, Putnam or Paul Tchio at guard, the basic ingredients for success are the same.

“If we’re not all on the same page and one guy messes up then the whole play can be a bust,” Rayburn said. ”One guy messing up can be the difference between a 25-yard gain and a tackle for loss.”

The Clemson offense just had a game in which 25-yard gains were more plentiful than tackles in the backfield. The offensive line, coming out of the bye week, just hopes to keep that momentum going.

Their last time out, the five men up front helped unlock the offense's potential with 438 yards. Now, it's just about reaching that potential with more points.

“To be a team we want to be, we gotta score points,” McFadden said. “That’s the biggest thing for us. Our defense has done a great job of having our back. I think it’s time to have their back, honestly.”