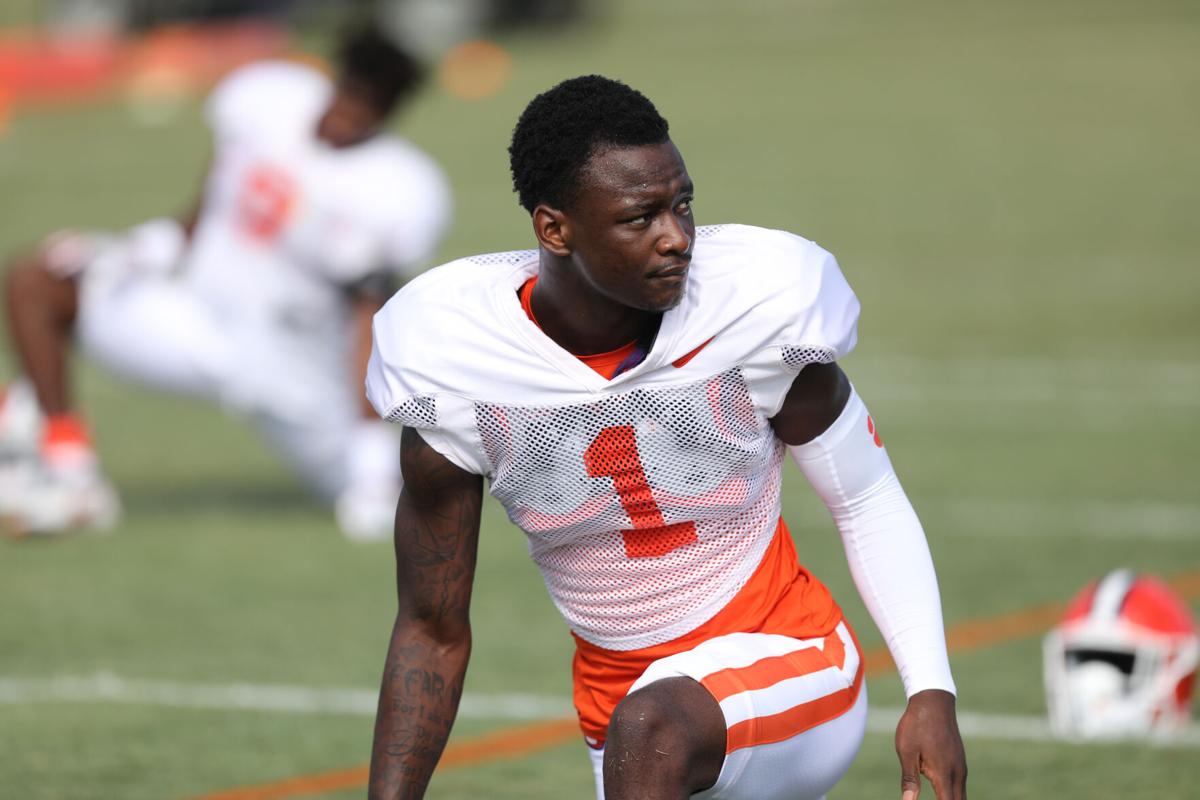 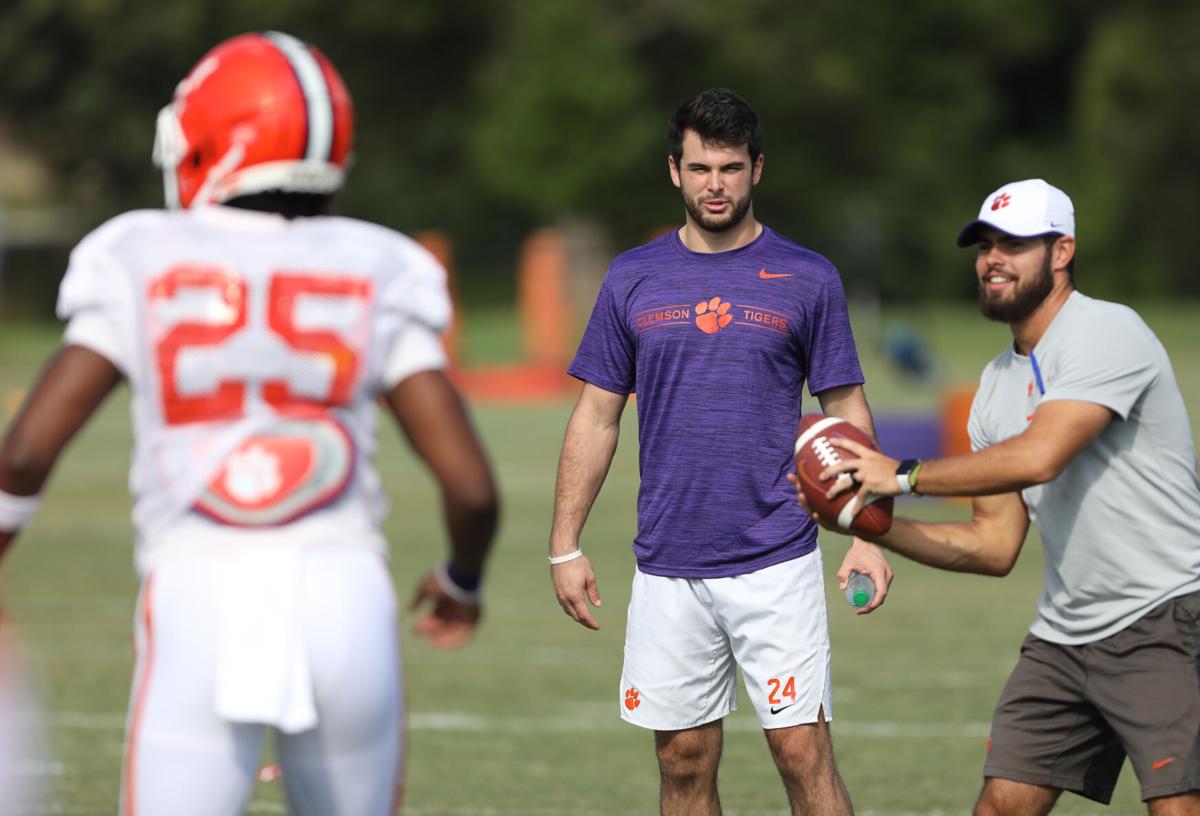 Clemson safety Nolan Turner (middle) stands on the sideline during practice on Aug. 12. Turner injured his hamstring early in fall camp but has returned to start alongside freshman Andrew Mukuba at safety. Dawson Powers/Special to The Post and Courier

Clemson safety Nolan Turner (middle) stands on the sideline during practice on Aug. 12. Turner injured his hamstring early in fall camp but has returned to start alongside freshman Andrew Mukuba at safety. Dawson Powers/Special to The Post and Courier

CLEMSON — Andrew Mukuba knew what he wanted. He wanted to play.

But the true freshman safety also knew what he didn’t have. He didn’t have the knowledge to be a starting safety at Clemson.

But Mukuba knew who did. Just before spring football got underway, the midyear enrollee found the soon-to-be sixth-year safety, Nolan Turner. The 18-year-old from Austin, Tex., did what plenty of heralded four-star prospects, accustomed only with athletic success, don’t quite know how to do.

He asked for help.

It started with a "Will you help me?" just before spring practice, Mukuba going out of his way to coordinate meetups with Turner at the football facility, letting the wily vet outline the basics of Brent Venables' defense. In hour-long sessions, they'd eventually drill down to finer concepts, and Mukuba would find himself flying to the ball ever-faster in spring practices.

Clemson's LaVonta Bentley learning from the best as backup linebacker

That mentor-mentee bond has now extended out of the film room and onto the field. Mukuba has been Clemson’s starting strong safety since the opener with Georgia, and Turner, who just recovered from a hamstring tear suffered in fall camp, made his 2021 debut alongside Mukuba versus Georgia Tech.

That’s a sixth-year player, who will turn 24 in late November, standing next to a first-year player who will turn 19 in early December. But they are both starters for the only defense in the country that’s yet to allow a touchdown through three games.

There is a significant age gap, for sure. But Mukuba is wise beyond his years.

“I used to be in the film room with (Turner) almost every single day, just trying to pick his brain,” said Mukuba, who understands the value of film study.

"Just the little things, how the offense lines up, what to expect out of that formation, and what’s coming your way. Stuff like that can elevate your game. Stuff like that is really important."

They are a well-fitted pair, both students of the game, but Clemson's starting safeties couldn’t have more different backgrounds.

Turner, the native of Vestavia Hills, Ala., is the son of an NFL fullback, Kevin. Clemson coach Dabo Swinney was Kevin's Alabama teammate, and they worked together in real estate during Swinney's break from coaching in the early 2000s. Kevin's son was a late-bloomer, choosing Clemson over UAB. But Nolan built himself into an All-American by 2020.

Mukuba, a native of Zimbabwe, arrived in Texas as a refugee when he was 9, and he didn't play football until sixth grade — when Turner was a junior in high school — but he quickly developed into a hard-hitting defensive back. He wanted to commit to Clemson quickly, too, in the summer of 2020, but Swinney hit the brakes. In the midst of an NCAA ban on in-person visits during the pandemic, Swinney hadn't met him.

Their stories are different, but they have proven similar in key ways. Their success is a function of their work ethic and humility. Venables, Clemson's longtime defensive coordinator, was amazed when he first met Mukuba on a recruiting visit and he knew everything about the program, not just as a football power but its core ideals and mission.

Since he's stepped foot on campus, Mukuba has said “thank you” constantly.

“He’s gone out of his way to come up and say ‘Thank you, coach.’ He’s done it a lot, to a lot of people, since he’s been here,” Venables said. “Thank you for bringing me. Thank you for believing in me. Stuff like that. Who does that at 18 years old? It’s a breath of fresh air.”

Mukuba wasn’t just thankful for the opportunity at Clemson. He equipped himself to seize it, being vulnerable enough to admit he needed help. He was also wise enough to know whom to ask.

Turner had just distinguished himself as one of the best safeties in the country with 66 tackles and a team-high three interceptions. He spent the spring mostly as a player-coach, resting his body for his last season with the Tigers.

Mukuba was a star pupil.

“He’s like ‘Look, I want to play, but I don’t know anything, I need to learn this defense,’” Turner said. “We’d go in, and I’d just start off breaking down concepts, breaking down scheme, before we even got to any of the calls. Just explaining everything to him. If you can get this big picture stuff down early, all these calls and details, everything else, will start to make sense to you.

“I think he stood out to the coaches in the spring, like ‘Dang, this kid is all over the place.’ He’s always getting his hands on the ball. So he’s just a savvy kid."

In the opener against Georgia, Mukuba stepped out in front of 70,000-plus fans in Bank of America Stadium in Charlotte and collected eight tackles. “It was a crazy experience, it was crazy loud,” Mukuba said after the game. “But as the game went on, I was just so focused, I couldn’t hear the crowd like that. I was just focused on what I have to do.”

Mukuba logged eight tackles in his first career game. He's had a pass breakup in all three contests thus far, still getting a hand on footballs.

Turner, on the other hand, had a little bit of catching up to do. A handful of practices into fall camp, the senior tore his hamstring and just couldn’t heal quick enough to be on the field in the opener.

By the ACC opener with Georgia Tech, he was ready to start alongside Mukuba. Turner had three tackles, and he's not at peak performance quite yet.

“Probably got a little worn out late, didn’t have the same kind of stamina that you normally would have,” Venables said, noting Turner had been out more than a month. “His legs probably weren’t underneath him. … But he did great, he played really, really well, and he gives you leadership, gives you consistency, makes very few mistakes."

Clemson's defense just has an abundance of veteran players, which probably has something to do with the touchdown-less streak to start the season. There's James Skalski and Baylon Spector leading the linebackers, upperclassmen Andrew Booth Jr. and Mario Goodrich at corner, and Xavier Thomas, K.J. Henry, and Justin Mascoll filling out the defensive end rotation.

Mukuba is the oddball true freshman, slotted next to a sixth-year safety. But there is a reason he's there, and it goes back to the spring.

"He cares, and he’s going to do what it takes to get on the field, and that’s the guy, ultimately, who you can trust," Turner said. "That’s how he’s gotten to play so early. We’re able to trust him. He’s made a lot of plays, he's all over the field, great athlete. And it's starting to click with him, too."

No. 9 Clemson at North Carolina State