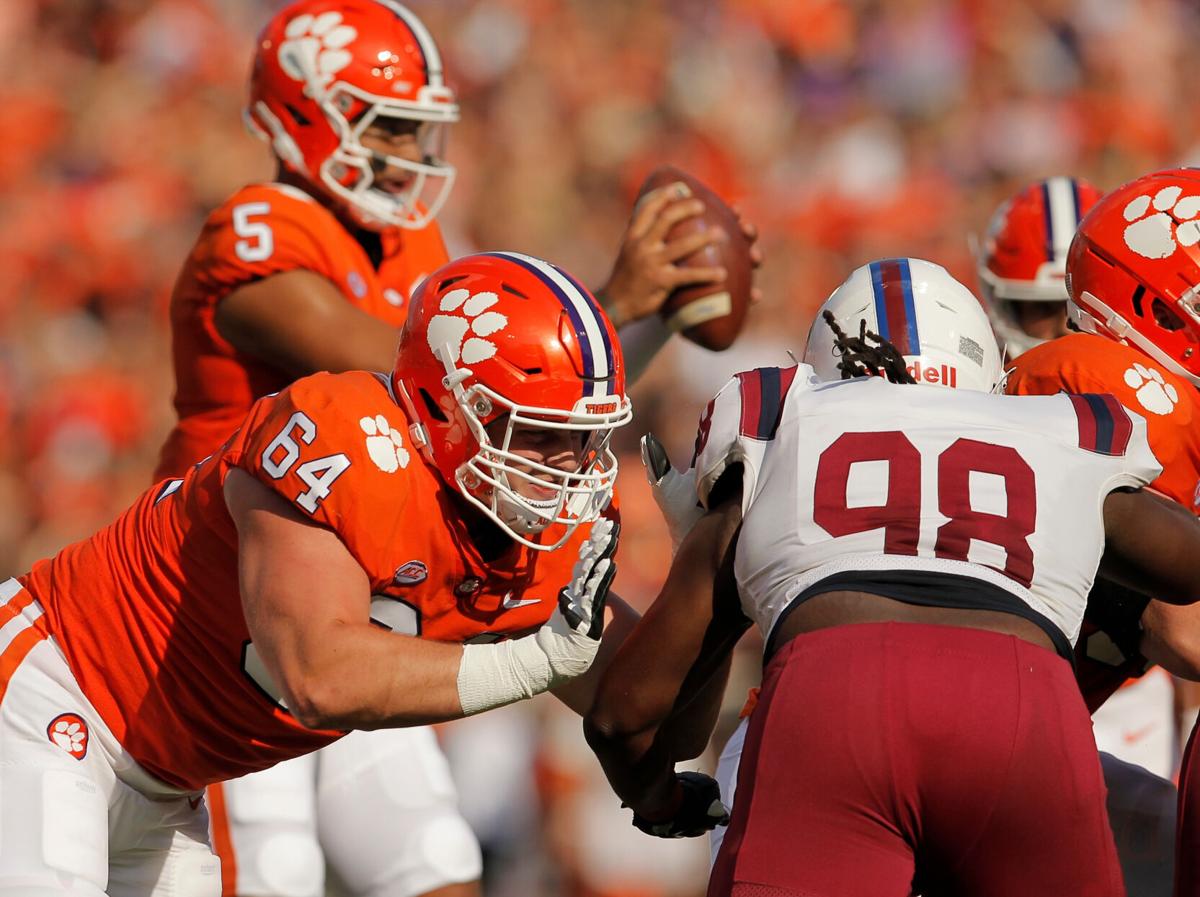 Clemson offensive lineman Walker Parks (64) has played right tackle for the Tigers but he has also been training at right guard in preseason camp. Travis Bell/Sideline Carolina 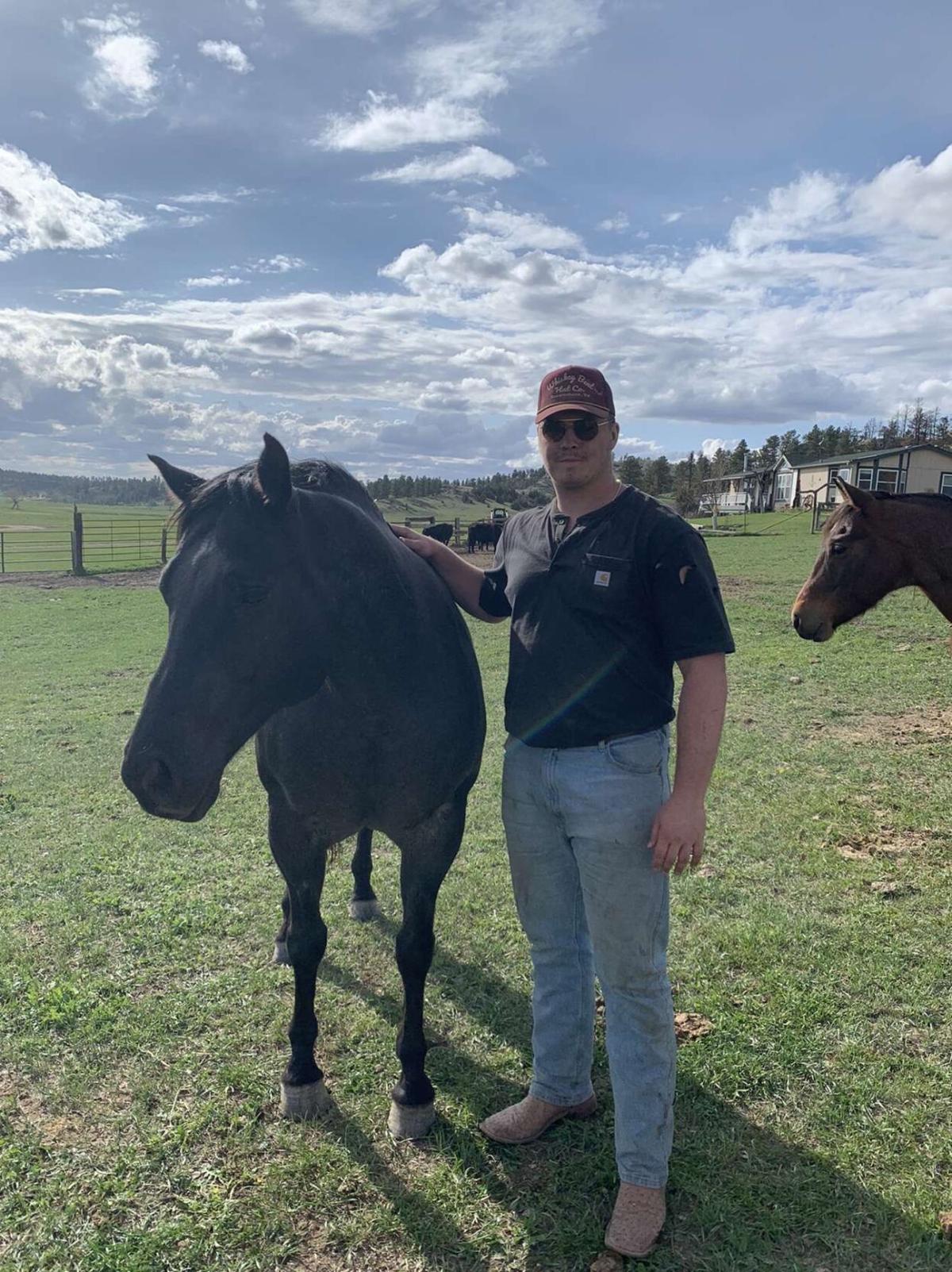 Walker Parks stands with Blackjack — a horse Parks met while interning as a ranch hand in Montana during the spring. Courtesy photo/Walker Parks

Clemson offensive lineman Walker Parks (64) has played right tackle for the Tigers but he has also been training at right guard in preseason camp. Travis Bell/Sideline Carolina

Walker Parks stands with Blackjack — a horse Parks met while interning as a ranch hand in Montana during the spring. Courtesy photo/Walker Parks

CLEMSON — Walker Parks can admit it now. He wasn't ready.

Working in Montana's thin air, the 6-foot-5, 300-pound offensive lineman lost his breath. Parks was pulling a gas-powered post-driver up a mountainside, stabbing the earth with poles for barb-wire fencing.

When he heard about an opportunity to do a spring internship as a ranch hand through Clemson's P.A.W. Journey program, Parks imagined he would be playing cowboy and riding horses. He wasn't ready for reality.

"I got up in that air, I made it 15 yards and I was like 'Hold on, fellas.' I had to sit down a few times, take a few water breaks," Parks said. "Of course, they had dudes who had been running and making fences 30 years ... They can do a mile in 10 minutes. We probably got five feet in 10 minutes."

Parks laughed as he recalled a moment so incredibly out of his comfort zone. He was back in something a little more comfortable on Aug. 11, donning shoulder pads as the Tigers reached the point in camp where offensive linemen can drive defensive linemen into the dirt in Jervey Meadow.

Parks admitted that Clemson's offense line, as a whole, wasn't ready on Sept. 4, 2021, when it stood across from a Georgia defense blessed with a stratospheric level of talent. A mix of inexperience and discontinuity made the Tigers' offensive line scuffle like Parks on a Montana mountainside.

"We have guys who have talent, including myself, but we went out there Sept. 4, and we weren't ready," Parks said. "That doesn't make us bad players, but we had a bad game. ... Now we know what it takes.

"We’ve been through a season. We know how to work hard, train hard, practice hard. Just building on that, growing on that, keep developing."

Parks believes the Tigers should be more ready for Sept. 5, 2022, versus Georgia Tech because they survived a season almost entirely out of their comfort zone.

Parks, a true sophomore, started at right tackle. Marcus Tate, a true freshman, was the Tigers' starting left guard. Matt Bockhorst, a fifth-year senior, manned center for the first time in his career.

As a freshman, Parks shined in late-game snaps, including a de-cleating of a Notre Dame defender in one highlight clip. But he doesn't mind admitting that blocking gassed defenders with the Tigers up 30 points is much different than lining up against first-round picks like Georgia's Travon Walker, Jordan Davis, and Devonte Wyatt in the first quarter.

"That’s a whole different world," Parks said. "We experienced that, learned that we weren’t ready, and kind of stepped back, watched film, and said ‘OK, we have to move forward.’"

There is still work to do. Even with four starters returning for the 2022 season, Clemson is still trying to find its best five in preseason camp. A competition continues at right guard between third-year blockers Bryn Tucker and Mitchell Mayes, though Parks revealed he has also been repping at right guard with freshman Blake Miller holding down right tackle.

Parks has no concerns stepping out of his comfort zone, if that's what is required. He has bulked up from 300 pounds to 315 and doesn't feel like he's moving any slower. Meanwhile, the 6-foot-6, 317-pound freshman Miller has been making an impression since his arrival in January.

Clemson's offensive line wanted to check Miller's birth certificate, Parks said, because they thought he had to be 25. He turned 18 in February, but he was out-lifting Clemson athletes many years his elder.

"Blake came in at right tackle, so if that’s his spot and we need a right tackle ... then put him there," Parks said. "Don’t ask him to learn two spots, let him focus on one spot, where I know the game a little bit better right now because I’ve been here longer, I can pick up both. I can make the transition inside and make it a little more smooth."

Whether it's Parks or Miller at tackle, there is optimism that a front anchored by third-year starters Jordan McFadden and Will Putnam, plus two-year starters in Parks and Tate, will have more success consistently winning at the line of scrimmage. Tate is more confident and mature. Putnam has only had one bad snap in camp, and it probably wasn't even his fault. Parks made a late call, messed up the cadence, and Putnam jumped offside.

Limiting errors will allow Clemson's offense to take off via a talented trio of Will Shipley, Kobe Pace, and Phil Mafah at running back.

"Even last year, they saved us most games," Parks said. "We’re out there, we can’t block who we’re supposed to worth a crap, and they are still hitting holes that aren’t even there and busting it for 40 yards."

Clemson linebackers trying to pick up where Skalski, Spector left off

Parks knows what needs fixing, and he's excited about the opportunity ahead, kind of like how he knows his skills as a ranch hand could use sharpening.

It's still an experience Parks thinks back on and smiles. A native of Kentucky, Parks has always wanted to have his own ranch one day.

Jamming those barb-wire fence posts into the ground wasn't easy work. But he managed. And Parks was able to hang out with some of the horses.

He even posed for a picture with the wildest horse on the ranch, Blackjack, who would bite and kick other horses as they were fed.

"Don't be fooled, I was scared to death. I thought he was about to kick me or something," said Parks, who coaxed Blackjack with some grass in hand. "But we snapped the picture real quick and I hopped over the fence real quick before he got after me."

An uncomfortable situation, but Parks made it through. A baptism by fire isn't unfamiliar to a Clemson offensive lineman after last season.

Jon Blau has covered Clemson athletics for The Post and Courier since 2021. A native of South Jersey, he grew up on Rocky marathons and hoagies. To get the latest Clemson sports news, straight to your inbox, subscribe to his newsletter, The Tiger Take.