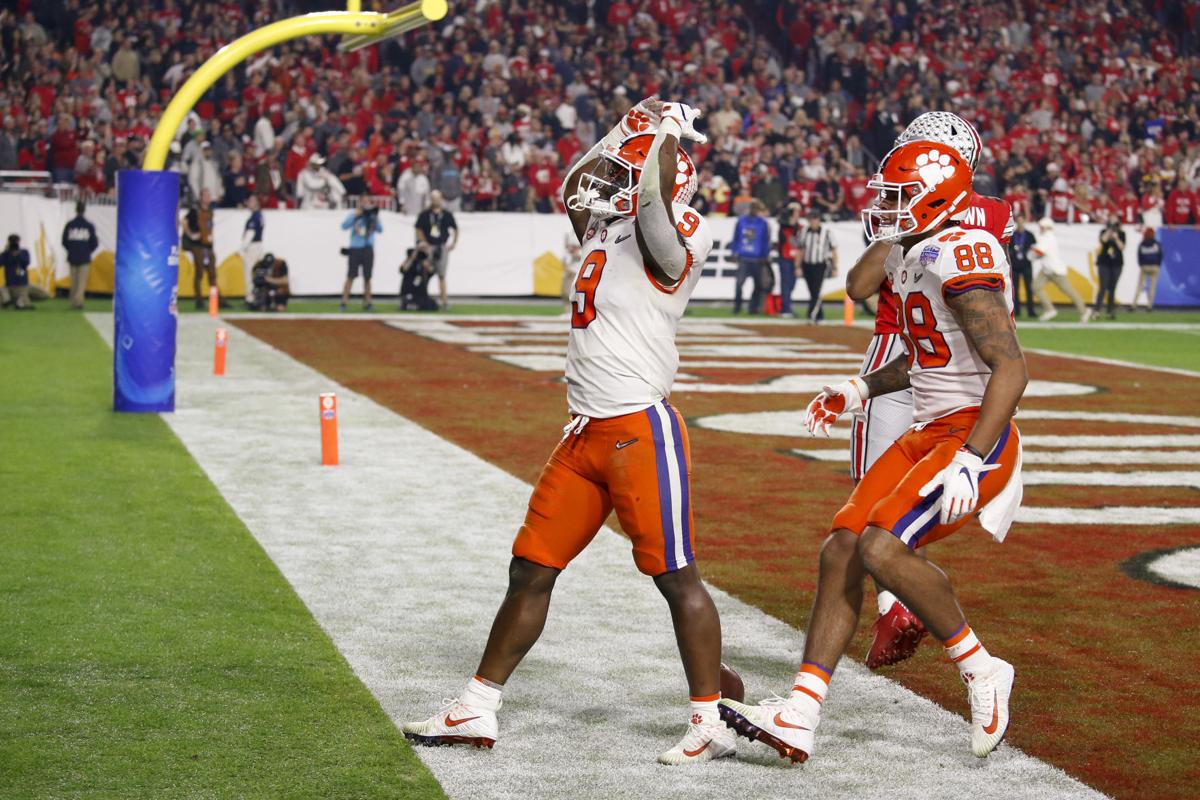 Clemson running back Travis Etienne (left) celebrates after scoring during the second half of the team's Fiesta Bowl playoff semifinal against Ohio State on Saturday, Dec. 28, 2019, in Glendale, Ariz. Ross D. Franklin/AP 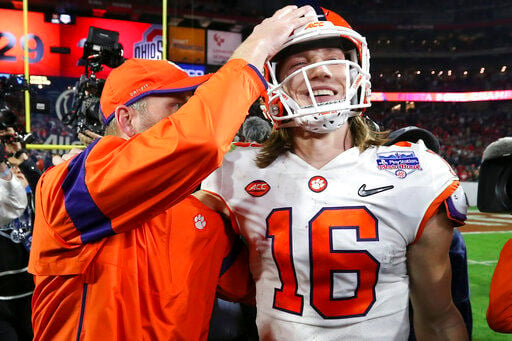 Clemson running back Travis Etienne (left) celebrates after scoring during the second half of the team's Fiesta Bowl playoff semifinal against Ohio State on Saturday, Dec. 28, 2019, in Glendale, Ariz. Ross D. Franklin/AP

GLENDALE, ARIZ. — Isaiah Simmons' favorite moment of Clemson's 29-23 win over Ohio State in the Fiesta Bowl on Saturday night was not his third quarter interception, nor was it any of his four tackles.

It was Trevor Lawrence's celebration after the quarterback's 67-yard touchdown sprint late in the first half. Lawrence normally hands the ball to the referee and plainly shuffles away after he reaches the end zone. A bigger reaction was necessary Saturday, with a spot in the national championship on the line against a formidable Buckeyes team.

Lawrence appeared to perform the 'money Manziel' celebration as he crossed the goal line, mimicking the gesture made famous by former Texas A&M quarterback Johnny Manziel. The made extra point pulled Clemson to within 16-14. The momentum in the College Football Playoff semifinal had definitively swung to the Tigers.

"I was like 'OK, Trevor,'" Simmons, the star linebacker, said. "He made me want to go out there and have his back."

Lawrence wasn't the only Clemson player to show more emotion than normal Saturday.

About midway through the third quarter, the signal caller found running back Travis Etienne on a screen pass. The junior with the shy smile broke free, his strong first step catapulting him into the open field. When he reached the end zone at the conclusion of his 53-yard dash, he swung his hands up and clapped, a rare display of moxiefor a player who normally punctuates scores by crossing his chest and handing the ball to the referee.

That score gave Clemson a 21-16 lead. Ohio State did answer, when Buckeyes quarterback Justin Fields lofted a 23-yard touchdown to wide receiver Chris Olave. But it was Lawrence and Etienne who landed the final blow.

Lawrence recorded career highs in rushing attempts (16) and rushing yards (107), so the Buckeyes' defense was likely expecting another run when he snapped the ball and took a couple steps forward on a first down with less than two minutes tp play. With the defense drawn in, Lawrence tossed a pop pass to Etienne, who sprinted the rest of the way for the decisive 34-yard score.

Etienne spiked the ball and flexed in front of the Ohio State band, until Lawrence ran up and chest bumped him.

Though Etienne was held to 37 yards on 10 carries, he caught three passes for a career-high and team-leading 98 yards with two touchdowns.

"He got to make some money with his hands," running back Darien Rencher said. "I know a lot of scouts wanted to see him catch the ball. ... That's big if you're going to be an every down back in the (NFL).

Etienne, a junior, said he's yet to make on a decision on if he'll declare for the 2020 NFL draft. First, the Tigers have a national championship to play for. It was clear Saturday that Lawrence and Etienne are relishing the moment.