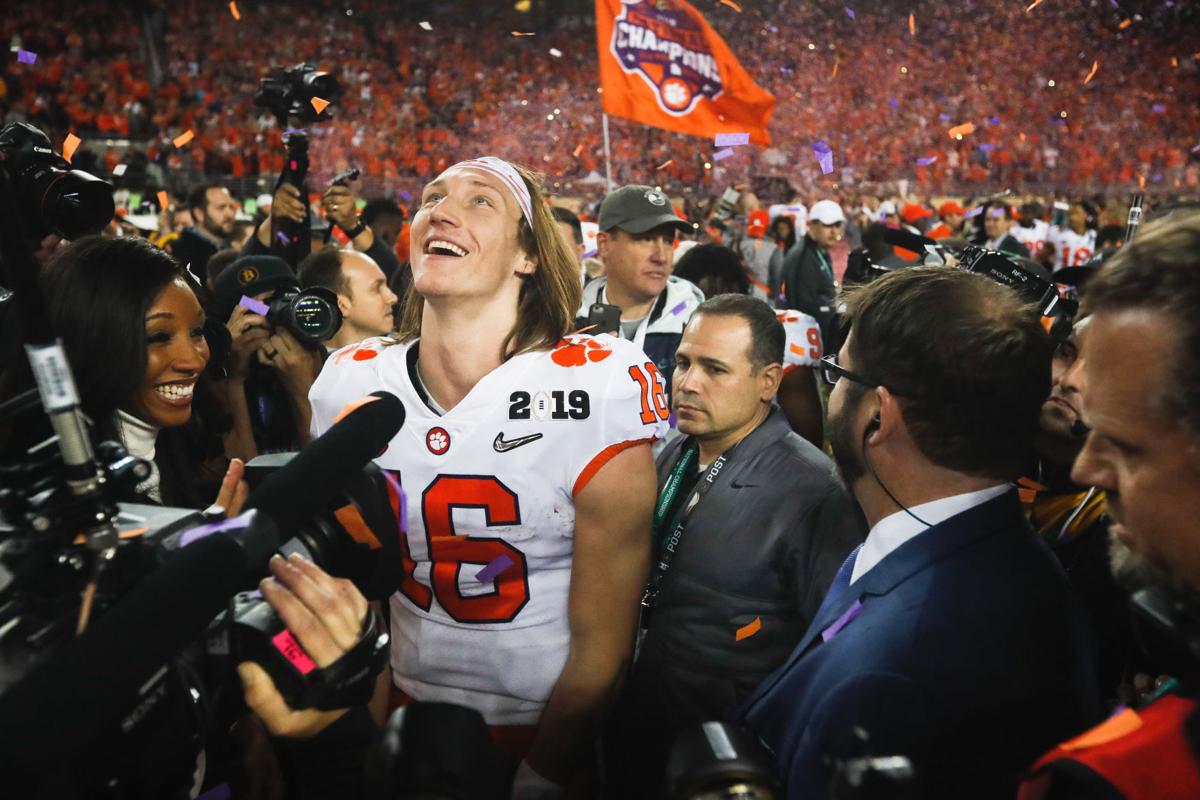 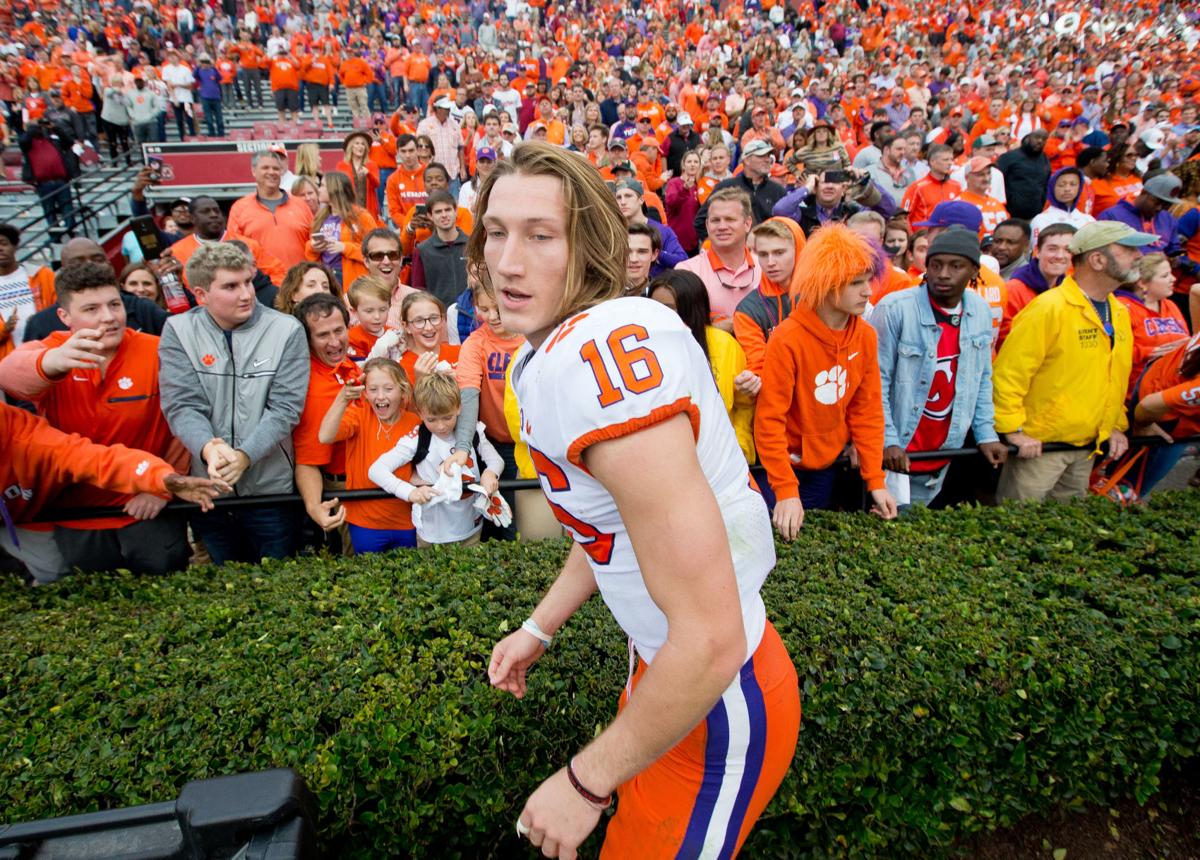 NEW ORLEANS — The cameras were focused on him again, so Trevor Lawrence smiled. With bright flashes popping in his face, the superstar Clemson quarterback posed for a photo with a young fan inside the XULA Convocation Center in New Orleans after trucking through his Saturday media obligations.

That's when Wendy Kahn, a 59-year-old in a white LSU jersey, swooped in. She wanted a piece of Lawrence too. The sophomore obliged her selfie request, smiling and leaning against the railing. Some Clemson fans booed. The cameras flashed again.

"I'd rub my hands through that hair if I could," Kahn said, after Lawrence had left the spectacle behind. The grin on his face had given way to a blank stare. A handler by his side, his pace quickened. His eyes locked on the exit.

The central debate of college football was on display inside the convocation center Saturday morning. There were the players for No. 3 Clemson and No. 1 LSU, which will meet in the College Football Playoff national championship Monday, sitting on elevated podiums, answering questions and feeding the content machine that has helped turn the the NCAA into a juggernaut: The organization made more than $1 billion in 2017.

Amid exploding television revenue and ballooning coach's salaries — coach Dabo Swinney signed a 10-year, $93 million contract last April, the richest contract in college sports history — Lawrence, with his golden hair and his golden arm, has been cast as an avatar of the ongoing debate shadowing the game.

He's a reluctant avatar, at that. Many around Lawrence insist he isn't worried about parlaying his mane into financial gain. He just likes the way it looks, they say. He's a good kid from a good family who's passionate about his Christian faith and playing football. He doesn't party and he goes to church on Sundays.

But corporate America is champing for Trevor Lawrence, who rose to fame when he led Clemson past Alabama in last season's national championship. Blond wigs are almost as prevalent as No. 16 Lawrence jerseys at Clemson games. Brands are preparing their pitches.

"There's a premium right now on quarterbacks," said Vince Thompson, CEO of the sports and entertainment marketing firm MELT Atlanta. "Especially for a kid that looks like a movie star.

"I've got clients that are interested in him right now."

Lawrence started high school with a buzz cut. Tight on the sides, tight on top. Then he let his hair grow, and soon his blond locks fell to his shoulder pads.

Some of the Cartersville High School (Ga.) coaches teased their ascending quarterback: Hey Trevor, cut your hair! Not Conor Foster, then Cartersville's defensive coordinator, who rocked a similar style in college. Foster pulled Lawrence aside one day at practice.

"I'm telling you right now: Don't ever cut your hair," Foster said, brushing off a confused look from the 16-year-old. "You've got to see the big picture. Think of Head & Shoulders, and endorsements down the line."

It was a joke, said Foster, now Cartersville's head coach: "But I guess the funniest jokes have a little bit of truth in them."

Lawrence's press conferences are paeans to politeness and platitudes. He makes eye contact with reporters and nods thoughtfully, then, as 20-year olds are wont to do, peppers his language with 'like,' 'kind of,' and 'pretty cool.'

For all his on-field flair, Lawrence in public cuts a strikingly bland persona. His hair, in some ways, exists as a substitute for personality, a living, breathing organism more famous than most of his teammates. It's a rite of passage for elite athletes to have a thing, and Lawrence's hangs from out behind his helmet. That's not to say he's not self-aware. He delivered a satisfying answer when asked earlier in September who he'd want to play him in a movie.

"I guess it'd have to be the dude from Remember the Titans," he said, chuckling, referencing Kip Pardue, who played the 'Sunshine' character many have likened Lawrence to.

His hair has inspired devotional Instagram and Twitter accounts, and kids back in Cartersville outfit Halloween costumes around his look. An Amazon search for 'Trevor Lawrence wig' yielded the online marketplace's No. 58 best seller in the 'Men's Costume wigs' category as of Sunday afternoon. Nowhere in the description for the item, sold by Watt's Wigs, is there any reference to Lawrence or Clemson, but the stock photo features a man wearing the product, which includes a white and orange No. 16 headband to go along with the long, blond hair. Watt's Wigs did not respond to a request for comment.

Lawrence, for what it's worth, acknowledged he's thought about how things would be different if he could profit off his image. But he said it would be difficult to fully integrate the concept into the NCAA's amateurism guidelines.

"There would be some opportunities available that would be cool, but I honestly don't really think about it," he said. "I'm just enjoying where I'm at."

Carson Murray, who played with Lawrence in high school and remains one of his best friends, said he'd like to see the sophomore get some sort of cut. When attending Clemson games, he said, Death Valley is packed with fans wearing No. 16 Lawrence jerseys.

"The amount of jerseys he's sold since he won that first ring is ridiculous," Murray said. "They wouldn't be making all that money off the jerseys if he wasn't as good as he is."

Tye Gonser, an attorney based in Los Angeles, has a plan. Along with Miami Dolphins quarterback Josh Rosen, the No. 10 pick in the 2018 NFL draft out of UCLA, Gonser put together a proposal that would allow athletes to receive money earned off their name, image and likeness upon graduation.

Rosen, Gonser said, loved UCLA, and would've stayed for his senior season had it not been an "irresponsible" financial decision. He instead left after his junior campaign, the minimum requirement for players seeking to depart school early for the NFL; men's basketball players can leave for the NBA after one season.

Many expect Lawrence to leave Clemson after next season. Thompson, during a guest spot on ESPN personality Paul Finebaum's eponymously named radio show, predicted last month Lawrence will sit out the 2020-21 campaign. Lawrence insisted that will not happen, but Thompson doubled down in a recent interview.

"Of course he's going to say it right now. He's not going to do anything now to deflate the bloom before Monday night," Thompson said. "If he wins Monday night, there's no way he comes back. And by the way, a lot of people agree with me."

Running back Darien Rencher, with whom Lawrence hosts a regular bible study for teammates, said Thompson doesn't know what he's talking about: "He's an idiot."

Gonser said he hopes Lawrence and his family have taken out an insurance policy, which would be helpful in the event the quarterback suffered a catastrophic injury. The attorney estimated Lawrence, if permitted to sign endorsements now, could already yield at least $250,000 for national deals.

"Let's say it's with Subway and Trevor Lawrence, and they have the rights to use his name and likeness on ads nationwide and the internet," Gonser said. "(That) would be, I think, a conservative number."

Lawrence tries keep a low profile on trips back to Cartersville. One evening during the Thanksgiving break he accompanied some friends on a visit to Firehouse Subs. He emerged from the backseat, pushed his famous hair behind his ears and yanked the hood from his sweatshirt over his head.

Alas, he was spotted anyway. He agreed to an autograph. The quarterback normally signs autographs and poses for pictures when asked, except on Sundays when he attends NewSpring Church with friends and teammates.

"Sunday is his Sabbath," Murray said. "He'll politely say 'No' and he'll tell them why. It's a religious thing."

The spiritual relationships he's developed with teammates has transferred to chemistry on the field. His latest feat was engineering Clemson's 29-23 comeback win over Ohio State in the Fiesta Bowl, a performance that further burnished his legend and appeal.

He had little of interest to say Jan. 6, addressing reporters at the team's practice facility before leaving for New Orleans. Lawrence admires Joe Burrow, LSU's quarterback and the Heisman Trophy winner, he said, and he's excited for another opportunity on the big stage. He deviated from the script only when a nosy yellowjacket buzzed by his face. "Woah," he shrieked, smiling, leaning to his right and trying to swat the wasp with his left hand.

Finally he emerged from the table after nearly 30 minutes. There we no selfie requests this time. He joined his teammates in performing synchronized agility exercises, ducking under and swinging his legs over a track and field hurdle.

Then the drill was over, and all the Clemson players jogged together toward midfield. The contours of their bodies faded as they descended together in an orange blob. Lawrence was among them, his hands swinging at his sides, and he might've liked like any other player, had it not been for the golden locks bouncing off the back of his neck.

Gene Sapakoff column: A Clemson-LSU national championship game in New Orleans delivers a lot of crazy plays, and the football game might be pretty good, too