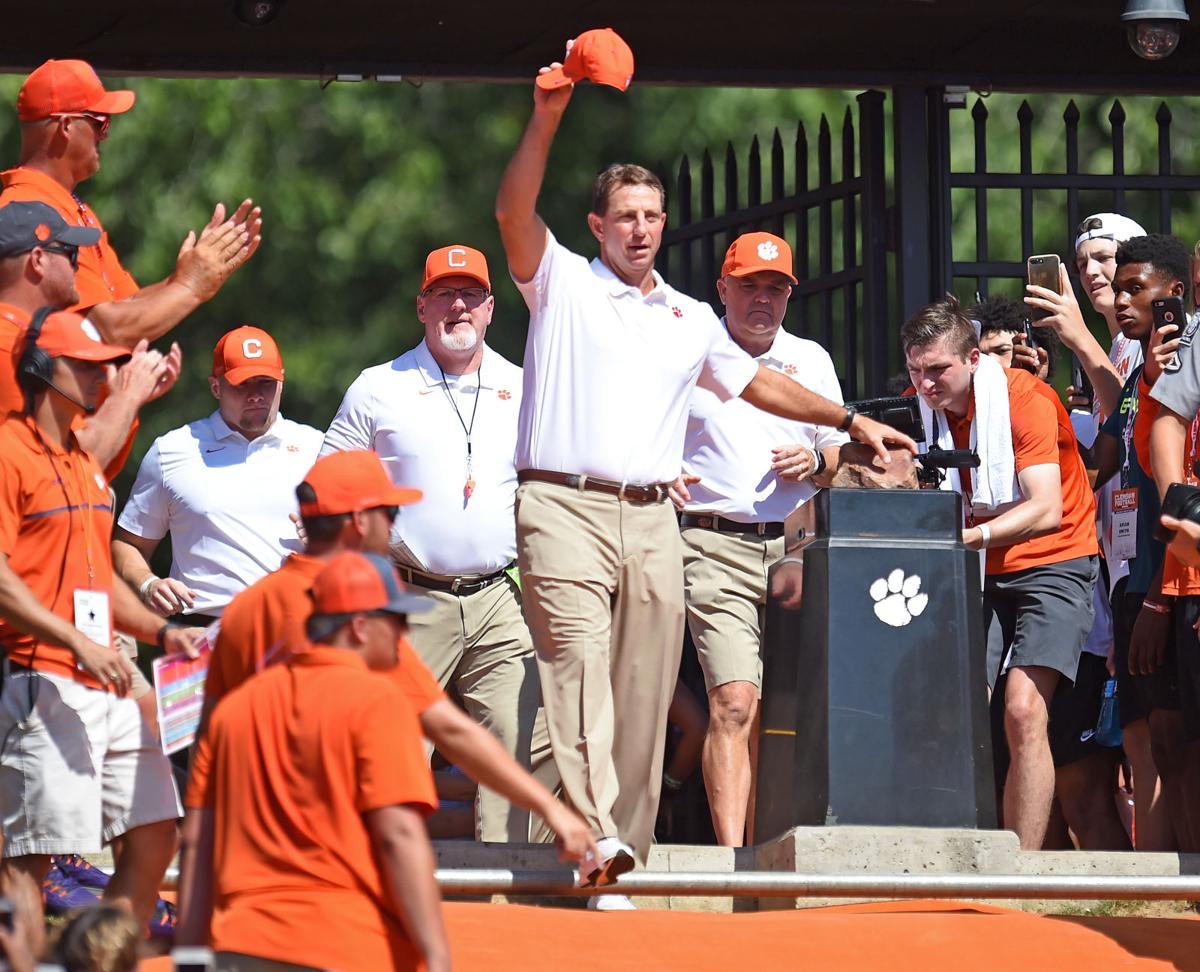 Clemson coach Dabo Swinney prepares to lead the Tigers down The Hill before the Tigers' game against Texas A&M on. Sept. 7. Gwinn Davis/Special to The Post and Courier 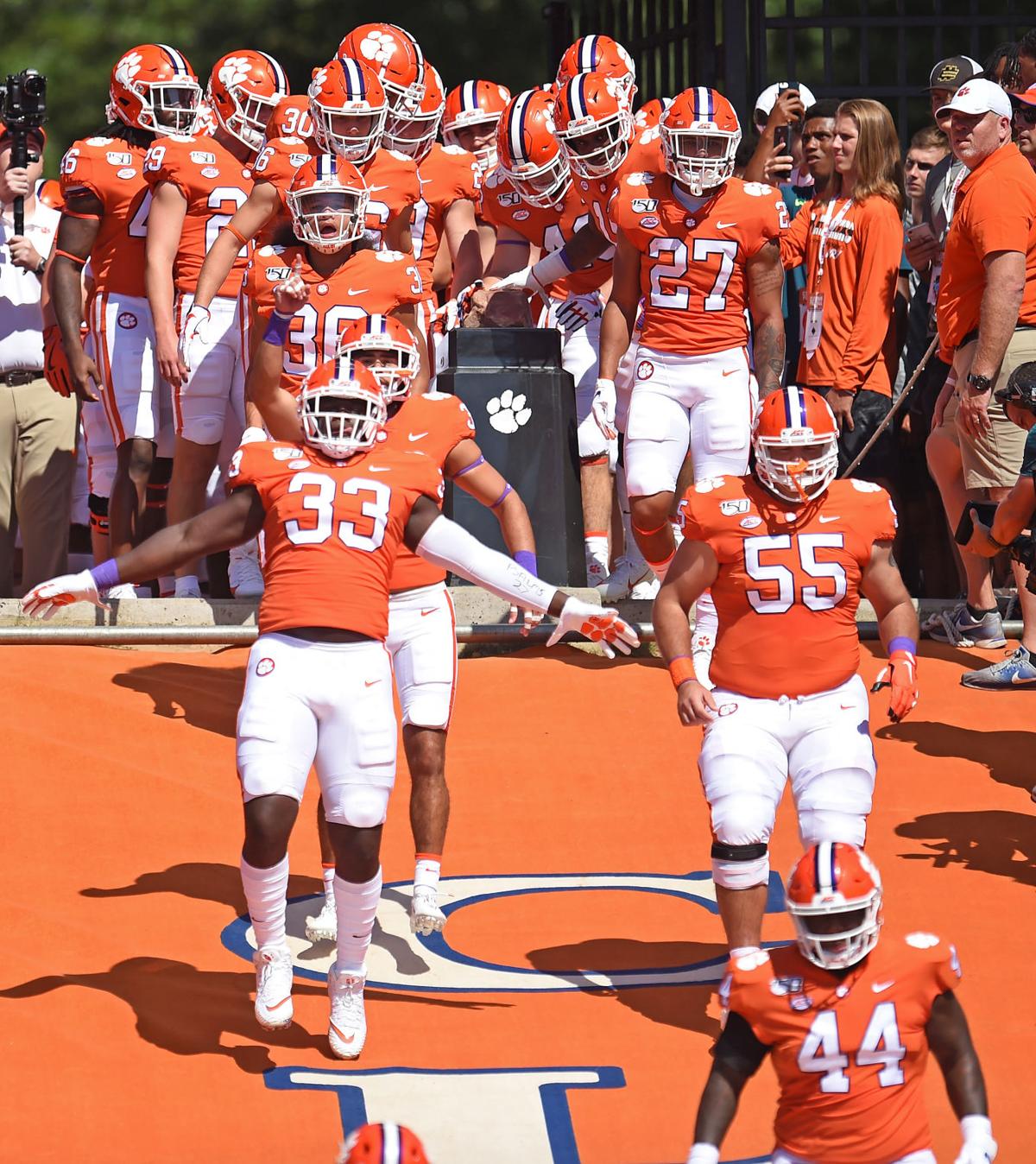 Clemson players run down The Hill before the Tigers' game against Texas A&M at Memorial Stadium on Sept. 7. Gwinn Davis/Special to The Post and Courier 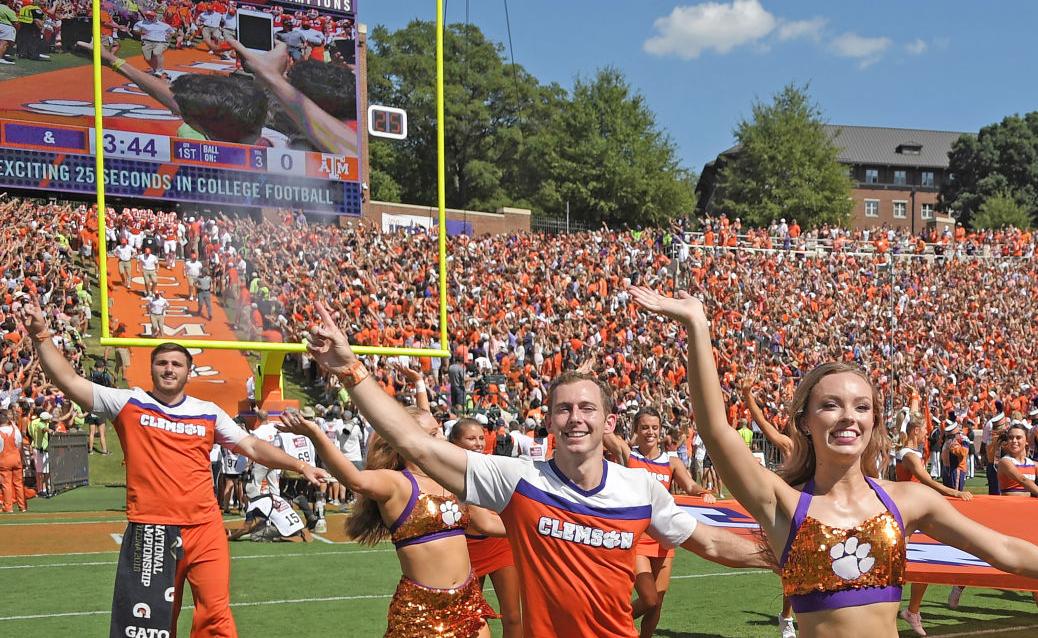 Clemson cheerleaders lead the charge down The Hill before the Tigers' game against Texas A&M at Memorial Stadium on Sept. 7. Gwinn Davis/Special to The Post and Courier 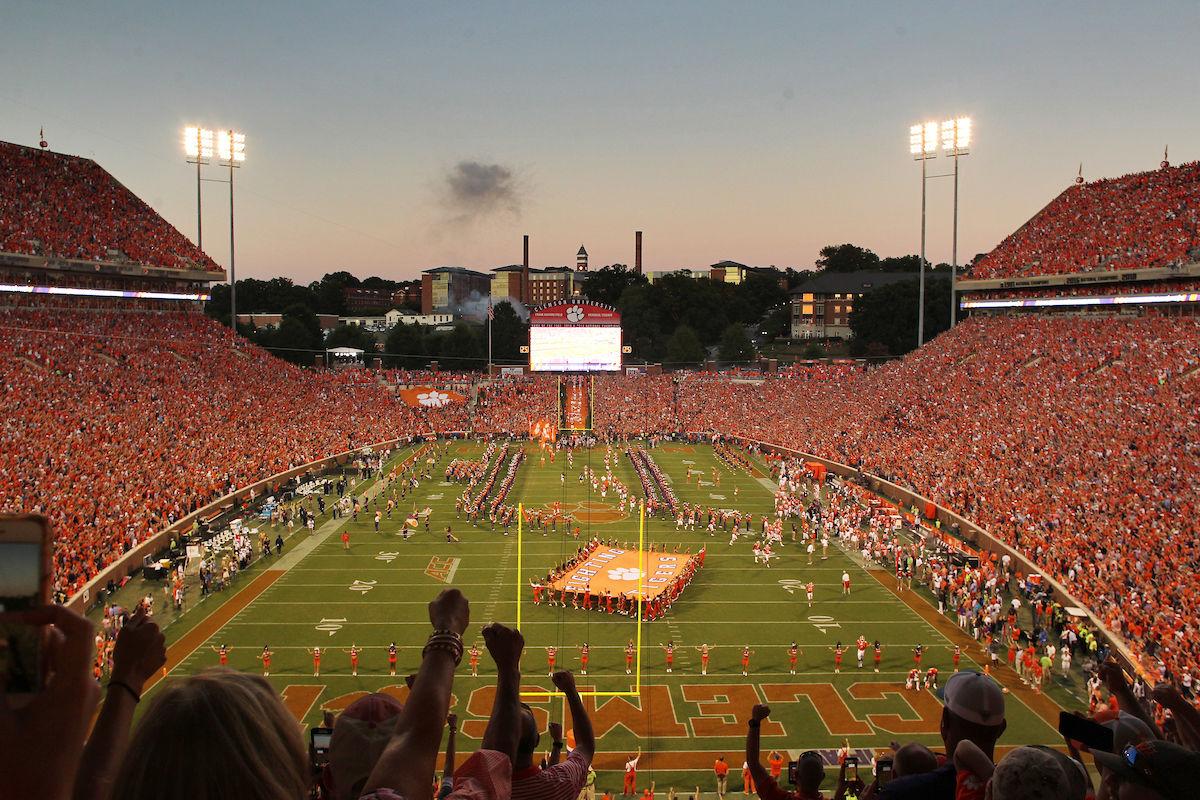 Clemson fans cheer as the Tigers run down The Hill before the Georgia Tech game on Aug. 29. Travis Bell/Sideline Carolina 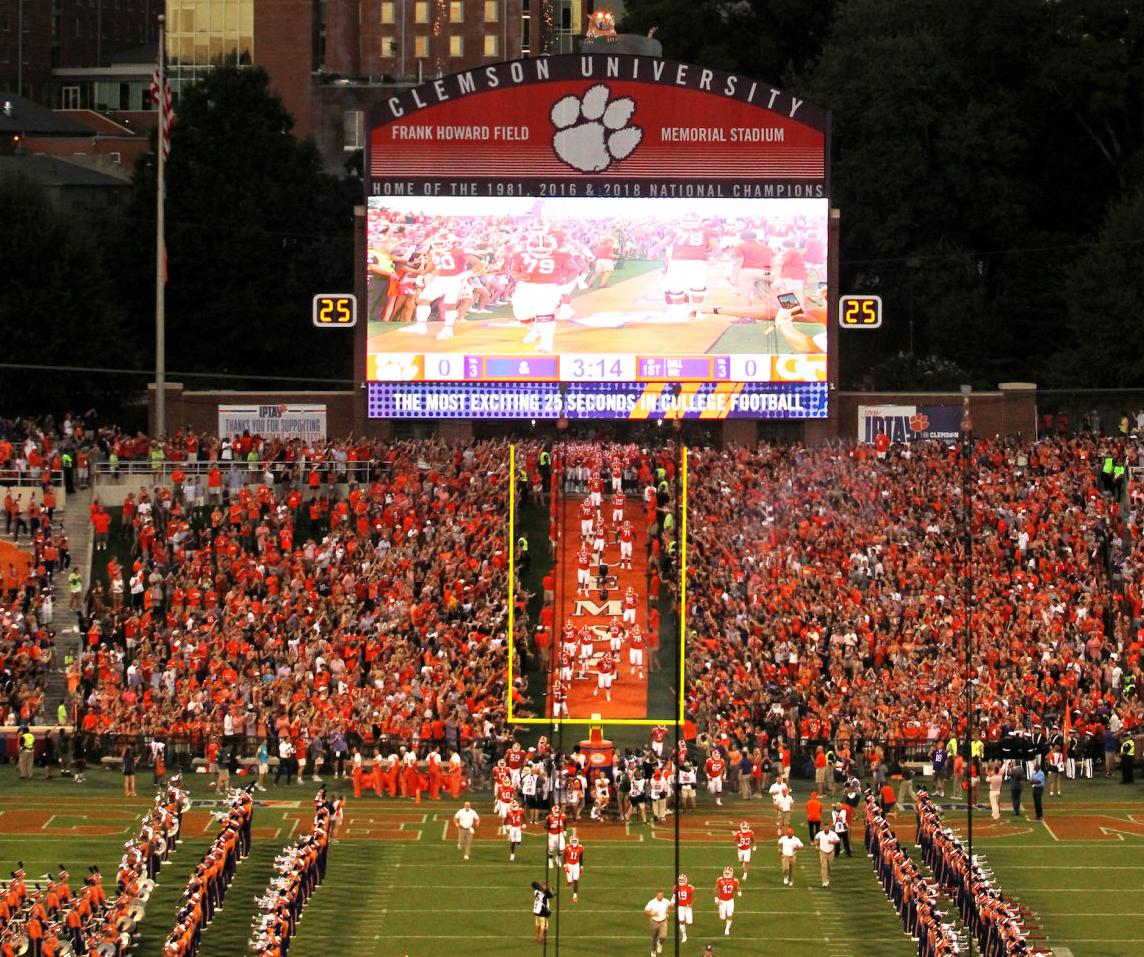 The tradition of Clemson players running down The Hill before home games is known as the most exciting 25 seconds in college football. Travis Bell/Sidelince Carolina 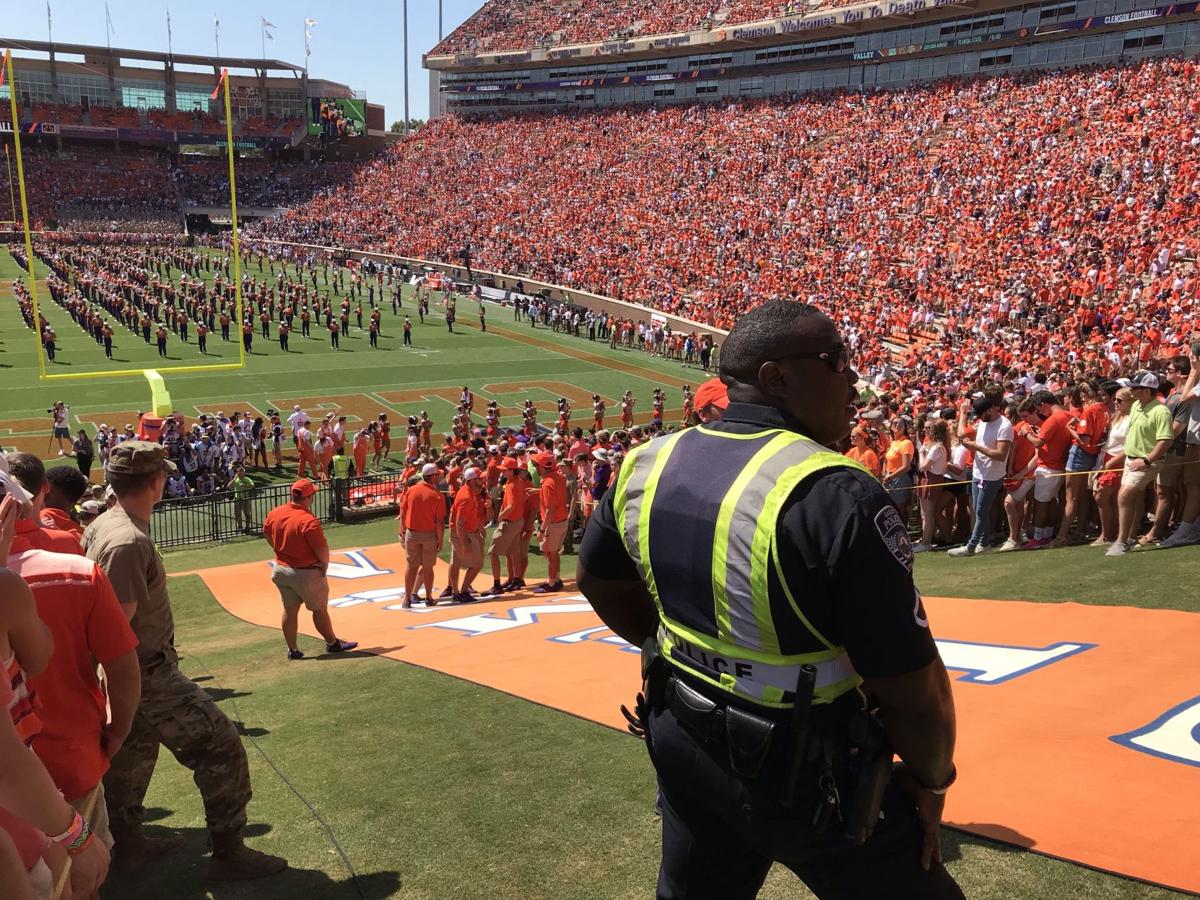 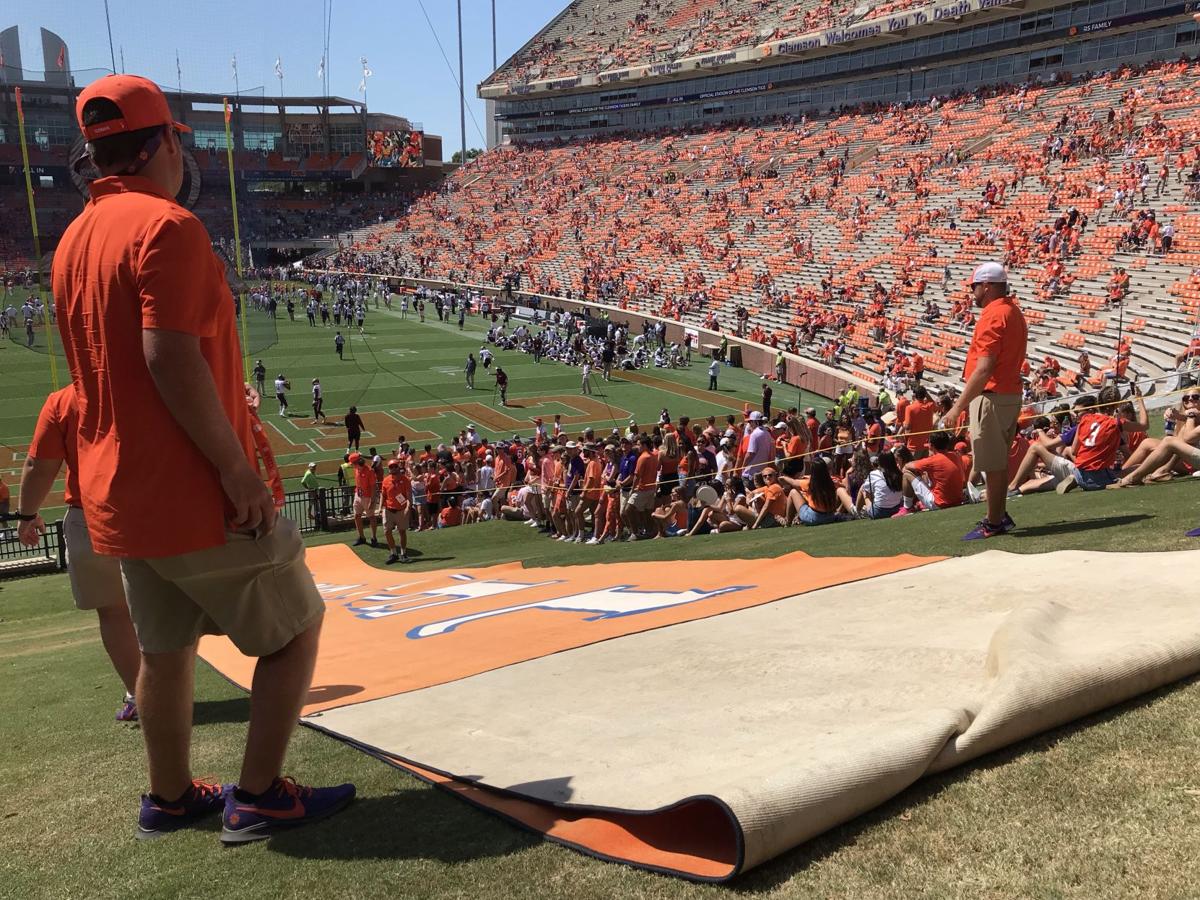 Clemson coach Dabo Swinney prepares to lead the Tigers down The Hill before the Tigers' game against Texas A&M on. Sept. 7. Gwinn Davis/Special to The Post and Courier

Clemson cheerleaders lead the charge down The Hill before the Tigers' game against Texas A&M at Memorial Stadium on Sept. 7. Gwinn Davis/Special to The Post and Courier

Clemson fans cheer as the Tigers run down The Hill before the Georgia Tech game on Aug. 29. Travis Bell/Sideline Carolina

CLEMSON — "The most exciting 25 seconds in college football" are nearing, but first someone needs to roll out the orange carpet. It’s 2:48 p.m., and the show starts in 42 minutes.

Twelve men in baseball caps, orange polos, khaki shorts and black sneakers crouch at the top of The Hill, throwing their arms around the 500-pound rug that stretches nearly 70 feet. They lift the carpet over Howard’s Rock, the emblem of Clemson’s workmanlike ethos, and walk backwards in sync, unfurling the rug, preparing the stage for the Tigers’ second home game of the season on Sept. 7.

Then they stand, baking in the 93-degree heat, as packed students roped in on either side of the carpet buzz, “Rather Be” by Clean Bandit featuring Jess Glynne booms from the Death Valley sound system, whistles hanging from the mouths of assistant coaches screech and trumpets from the Clemson band fight for attention.

Robbie Phillips, Clemson’s director of athletic facility maintenance, surveys the scene. His eyes land on a group of fans. Someone has to enforce the rules.

“Hey, guys,” he says, approaching the group. He urges them to inch off to the side, away from the rug. It’s imperative no fans get trampled in the frenzy.

The minutes on the jumbotron above tick away. One member of the crew stands atop the rug, directing students to the Hill's sides, timing his movements to the beat of his music. The rest stand off to the side, some snickering at him, some ignoring him.

This is the highlight of the work week for the group, which is comprised of members from Clemson’s athletic grounds crew and athletic facilities crew. Many grew up attending Tigers football games, including sophomore McKenzie Thomas, whose family belongs to IPTAY, Clemson's athletic fundraising organization. He points toward some seats near the end zone, where he used to sit with his family. He has a better view now. The previous week, Clemson’s season opener against Georgia Tech, was his first time setting up the rug for the running of the Hill.

The life of a crew member is not glamorous. Feet away, one is asked to move out of the background of a group photo in front of Howard’s Rock. He steps out of frame. The guys normally go unnoticed, stage hands in a pep rally that builds the energy for fans and players. Coach Dabo Swinney said he’s never communicated with any of them. The closest thing to recognition came during the Georgia Tech game, when an announcer on the ACC Network shouted out (supervisor of athletic grounds) “Mike Echols and his crew.” None of the crew members were named.

“We’re kind of in the shadows,” says Will McAlister, a local high school senior who works on the grounds crew. “But like, we take care of the field. Everyone sees the field but don’t know who puts in the work.”

At 3:15 p.m., the crew gets into position. They surround the rug, six men on each side, pressing the soles of their feet on the rug’s edges. This rug is relatively new. The previous one was retired after the 2015 season, having been punctured with cleats-sized holes, then snipped into doormats and sold to fans.

This rug might meet a similar fate one day, but now a couple of deputy sheriffs from the Easley Police Department wearing neon vests over their uniforms inch towards it, their eyes fixed on the black gate ahead.

Clemson players and coaches file out of the home locker room and into three buses, flanked by a motorcade, and ride around the stadium until they reach the Hill. Fans lined up outside cheer on their heroes.

Phillips turns to an observer at 3:29 p.m. “This when it gets fun,” he says. A pre-taped hype video is played, featuring Swinney explaining the significance of the Hill over dramatic music. His face pops up on the jumbotron: “The intensity of the moment is very real”

Then, in the flesh, he appears. Swinney bursts through the gate, rubs Howard’s Rock and tips his cap to the 81,500 fans in attendance for what will turn into a 24-10 win over Texas A&M. As his assistants and players file in behind him, Swinney paces from side to side, pumping his fist, basking in the applause, including from some of the rug guys. A group of Clemson recruits off to the side raise their cell phones and record, documenting the ritual that might one day mark their entrance into college football.

The signal cannon goes off, and Swinney sprints down the hill, followed by his players and assistants, for the 404th running of the Hill. The crew waits for the last of the 140-person group to make it down the Hill, then scrambles back into action. This is the stressful part.

The rug will remain unfurled through halftime this Saturday for the Charlotte game, when the closing scene for the upcoming Disney movie ‘Safety’ — which is based on the true story of former Clemson running back Ray Ray McElrathbey — will be filmed. But that is not the case Sept. 7.

The crew places a metal bar at the top the rug for balance and rolls the rug down the Hill. As patches of grass reappear, students from either side stream back into the middle.

The pace of the giddy students exceeds that of the crew, so the deputys extend their arms, pushing back to give the crew space. Phillips crouches on his knees and gives the rug one last push. They get it all the way down to the field, then pick it back up, all 12 of them, and after a few feet, plop it down against against a side fence.

One crew member shows off a brand-new blister. He smiles and shakes it off, joining his co-workers at the edge of the end zone, ready for the game. Soon quarterback Trevor Lawrence, running back Travis Etienne and the rest of the defending national champions will take the field. No one has a better view than the rug guys.

Clemson's Rodgers got a new tattoo after suffering ACL tear. Its message resonated.

CHARLOTTE at No. 1 CLEMSON

Inside Clemson's Dabo Swinney's binder: 'What I've learned as a head coach'

Clemson's game against Charlotte on Saturday will mark Swinney's 150th contest as the Tigers' coach.