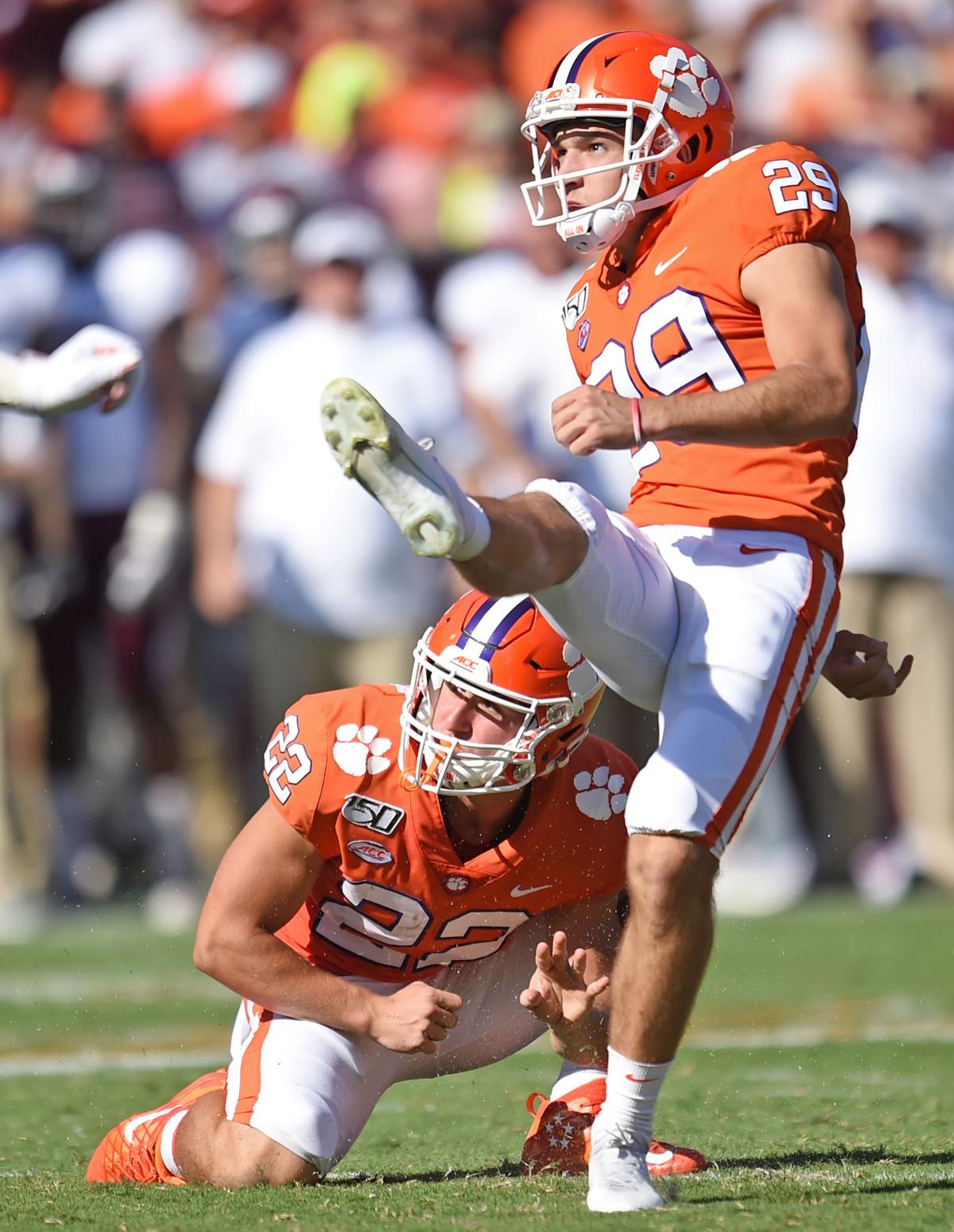 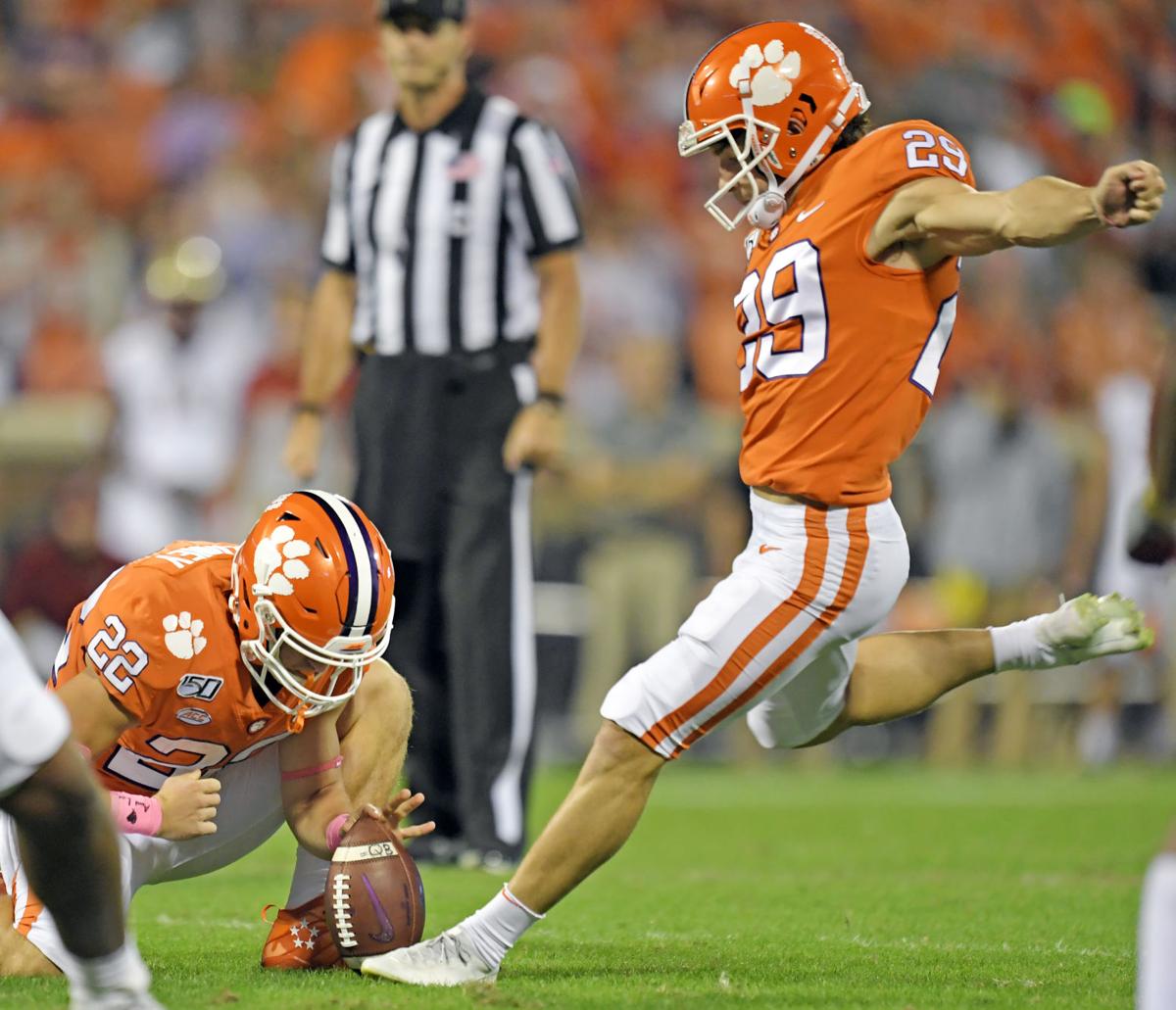 CLEMSON — When B.T. Potter lines up for a field goal, the Clemson kicker channels a warm memory from his childhood.

"My dad doesn't even know I do (it)," the floppy-haired sophomore explained.

B.T. stands for Benjamin Thomas, and as a kid, his father often called him 'Ben.' So before the sophomore fixes his eyes on the ball — he never checks how far the field goal is — he repeats a familiar message to himself:

The mantra is a key part of Potter's routine. It's the mental side of the game, he said, that separates the good kickers from the greats. Potter's leg strength has never been in doubt, but his focus in big moments has been a topic of conversation this season.

The biggest moment of the kicker's career could be coming Monday in the College Football Playoff national championship against LSU, a matchup between two offensive powerhouses some believe could come down to the end.

Championships are sometimes won and lost with field goals. If that happens in New Orleans, Potter said, he'll be ready.

"I'm looking forward to it," he said.

It's been an up-and-down campaign for Potter, who entered the season with high praise from coach Dabo Swinney. The Rock Hill native converted a 51-yard field goal in the team's opener against Georgia Tech, but then he began to struggle from shorter distances.

A missed 24-yard field goal Oct. 12 against Florida State proved Swinney's breaking point. The veteran coach followed Potter down the sideline, barking at him in an outburst witnessed by a national television audience. The incident prompted a debate among fans and pundits: Did Swinney go too far? Or did his kicker need the tough love?

Back home, Potter's former coach at Southe Pointe High School, Strait Herron, opted against watching a clip of the event. He heard about it from a friend who believed Swinney to be out of line. Herron said Swinney acted within his right as a coach, though he hinted there could've been more factors at play.

"I would imagine, and this is just me speculating, something had to be going on that he wanted to catch B.T.’s attention," Herron said. "It's a coach move. If you want to catch a kid's attention, (it's) usually not just for missing a field goal, but probably something else leading up to that. That's how you do it."

Swinney defended his tactics, insisting that sometimes  "you need to really kick them in the butt." Potter was temporarily benched for short-distance field goals and extra points in favor of senior Steve Sawicki, but kept his duties as Clemson's kickoff man.

Potter reclaimed all of his responsibilities as the season wore on, and was called on to kick a 49-yard field goal on Clemson's first drive in the Fiesta Bowl against Ohio State.

He missed it, but Potter said he quickly regrouped and was ready for a late-game attempt if necessary. As Clemson traded blows late with the Buckeyes, Potter fixed himself in front of the kicking net. At one point Swinney sent someone to fetch Potter. The coach told him to be ready.

Potter knows the national title game inside the Mercedes-Benz Superdome could come down to him. He doesn't watch a lot of NFL, he said, but he'll pay attention if he sees a game coming down to the kicker.

This past Sunday, Clemson players were gathered in their practice facility watching the New Orleans Saints and Minnesota Vikings in a playoff game. New Orleans kicker Will Lutz lined up for a 49-yard attempt that would send the game to overtime. Potter saw himself in Lutz.

Lutz did make the kick, but the Saints lost to the Vikings in front of their home fans in overtime. Later that night, lying in bed, Potter pictured himself in the same building against LSU.

His vision was detailed: Clemson was trailing by two points and Potter was called on with seven seconds left. It was a 43-yarder from the right hash.

The kick, in Potter's mind, sailed through the uprights. Officials' arms shot upwards. The national championship was won.