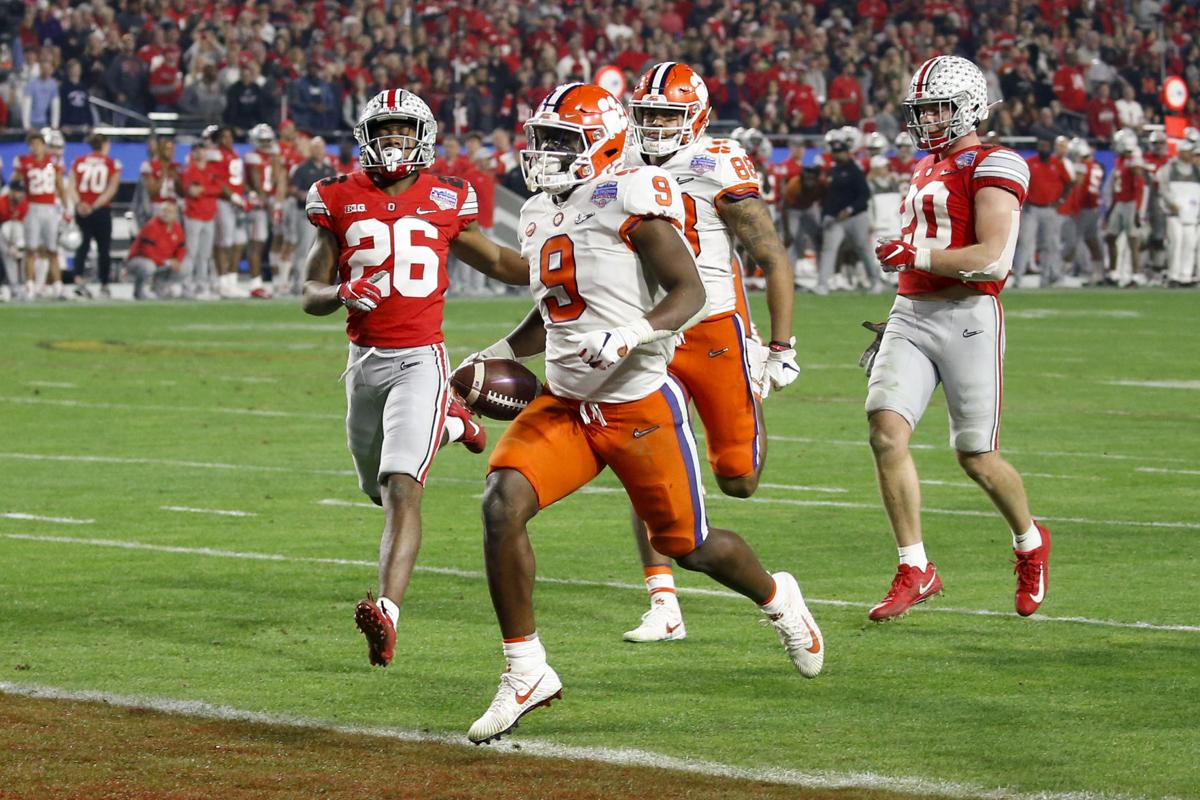 Running back Travis Etienne scores a touchdown against Ohio State during the second half of the Fiesta Bowl Dec. 28. Etienne and No. 3 Clemson play No. 1 LSU in the College Football Playoff national championship Monday. (AP Photo/Ross D. Franklin) 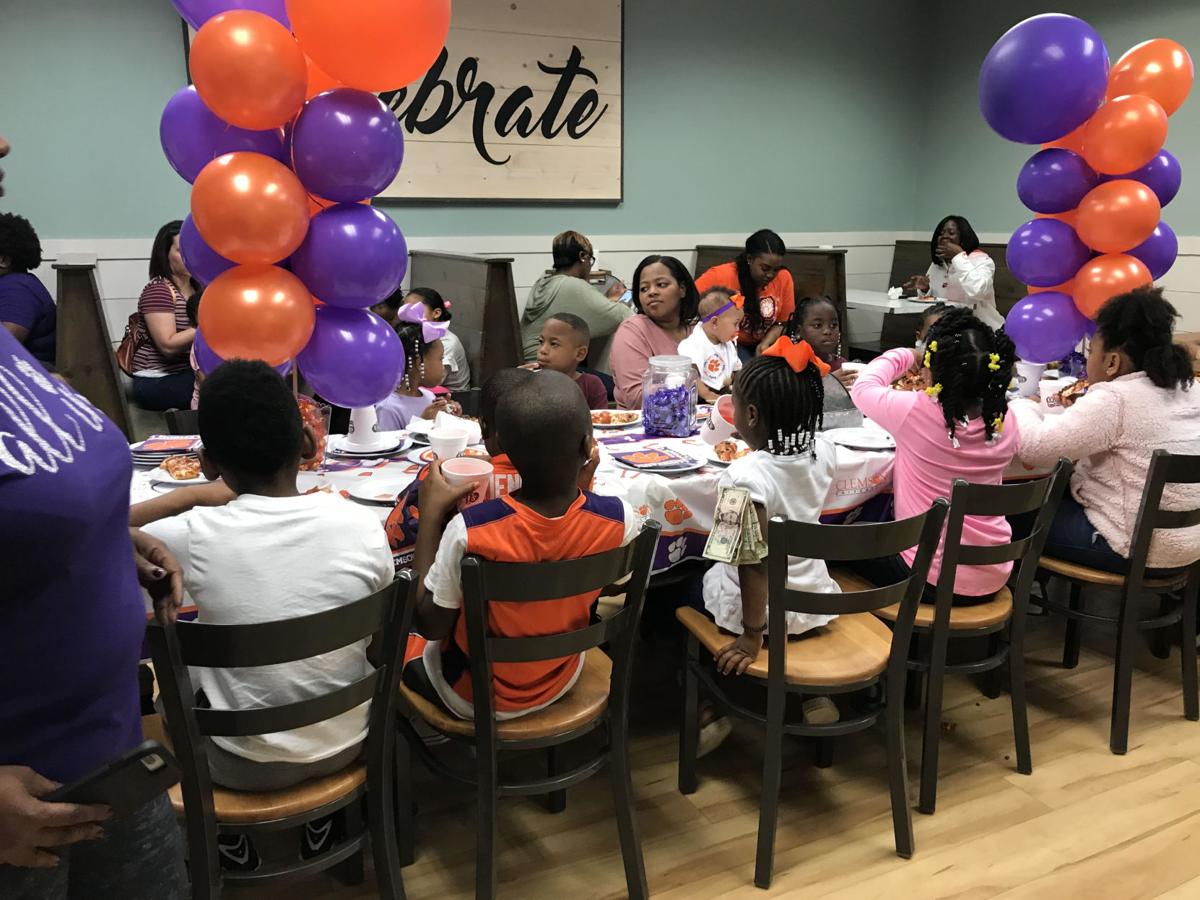 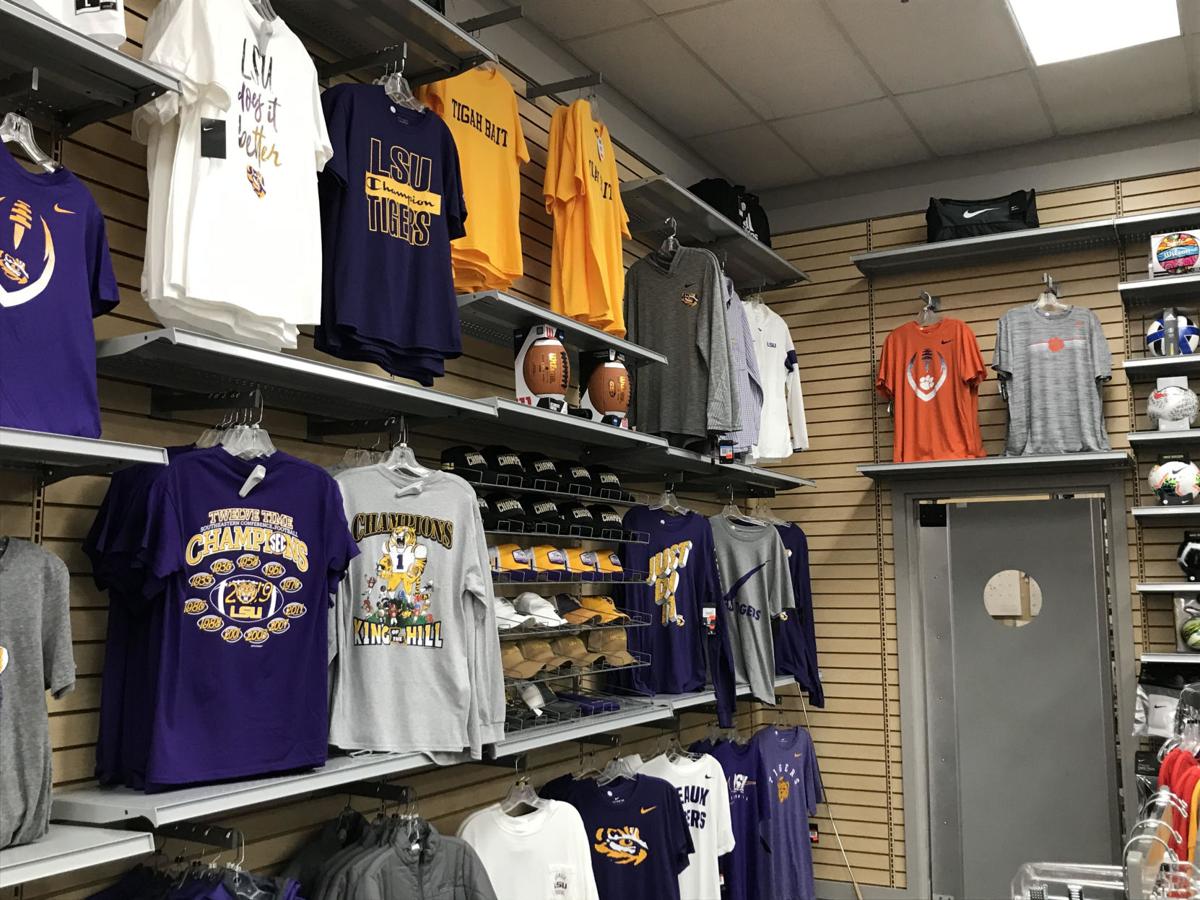 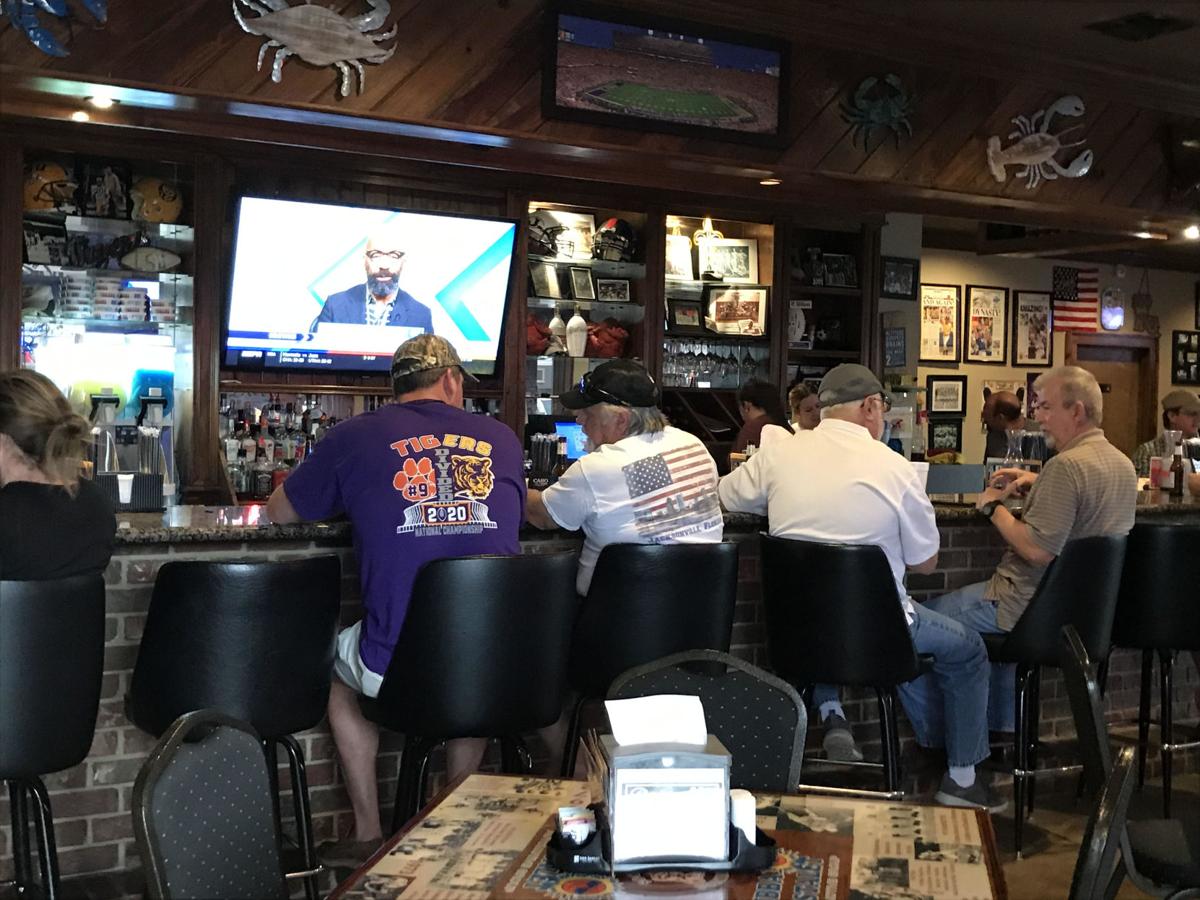 The national championship was a topic of conversation Friday evening at Darrell's, a restaurant and bar in Jennings, La. (Joshua Needelman/The Post and Courier). 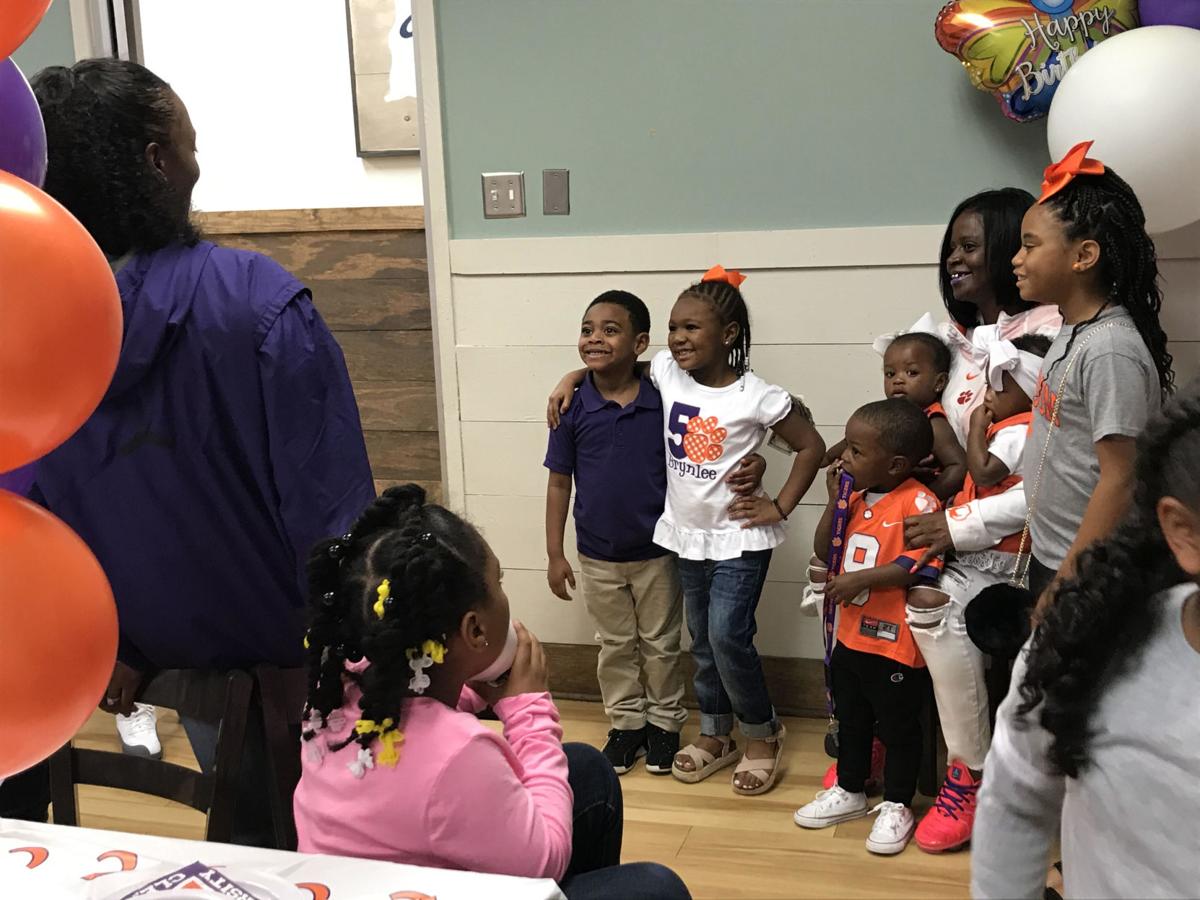 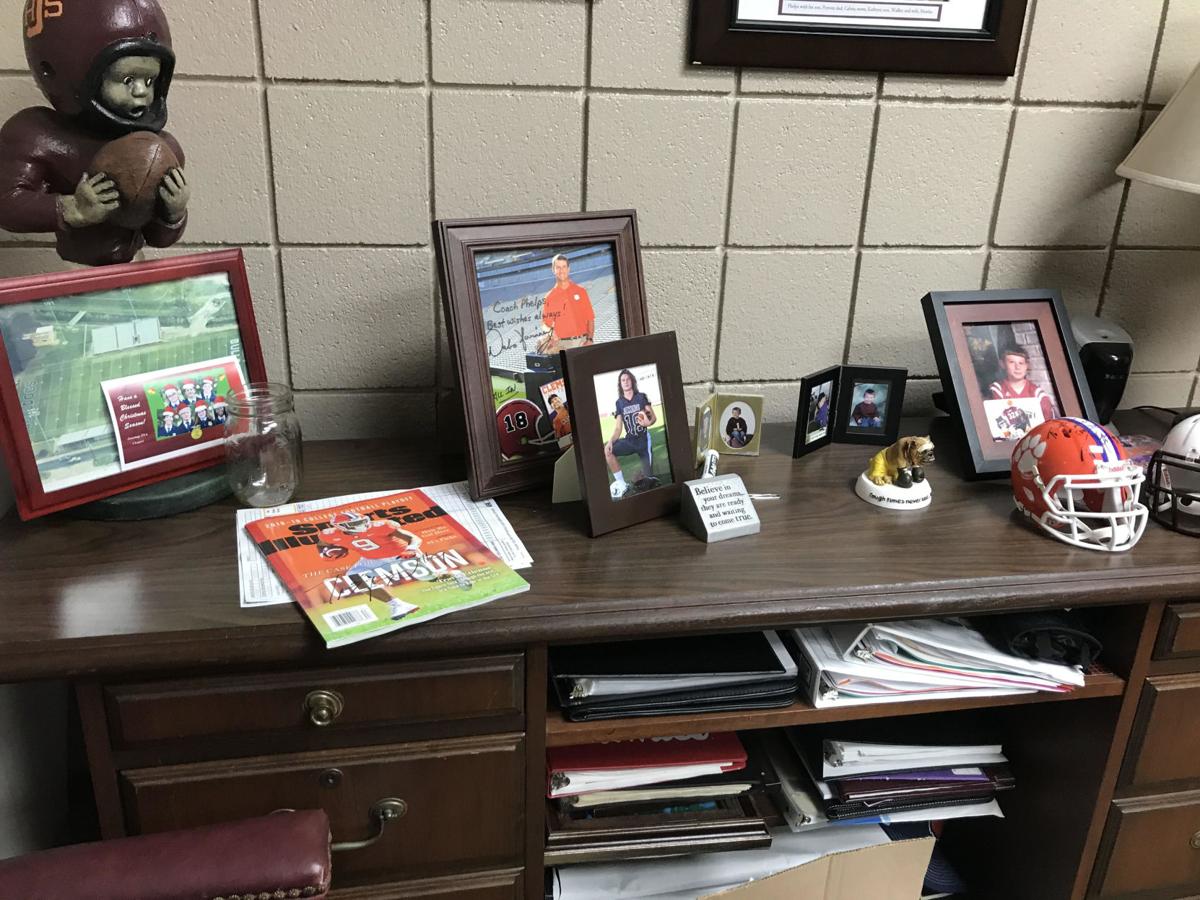 Jennings high school coach Rusty Phelps has a Sports Illustrated cover signed by Travis Etiienne, among other trinkets, on a shelf in his office. (Joshua Needelman/The Post and Courier).

Running back Travis Etienne scores a touchdown against Ohio State during the second half of the Fiesta Bowl Dec. 28. Etienne and No. 3 Clemson play No. 1 LSU in the College Football Playoff national championship Monday. (AP Photo/Ross D. Franklin)

The national championship was a topic of conversation Friday evening at Darrell's, a restaurant and bar in Jennings, La. (Joshua Needelman/The Post and Courier).

Jennings high school coach Rusty Phelps has a Sports Illustrated cover signed by Travis Etiienne, among other trinkets, on a shelf in his office. (Joshua Needelman/The Post and Courier).

JENNINGS, LA. — Rusty Phelps leans back in his creaky office chair, turns to his right and leans over the garbage can beside his desk. Whoosh. A rocket of chewing tobacco juice flies out of his mouth.

He sits up straight, throws his hands toward the ceiling in exasperation. There's that question again.

"Man!" he mouths silently, because he doesn't want to be rude to the local radio host on the other end of the line. But Phelps, the bald-headed, rusty-voiced 25-year steward of Jennings High School (La.) football, is tired. He's tired of that question, of which it feels like he's been asked a million times since Dec. 28.

He was initially delighted when Clemson beat Ohio State in the Fiesta Bowl that evening to earn a spot in the national championship. It was quite neat, Phelps thought, that star Clemson running back Travis Etienne, Jennings' "favorite son," would finish his season in New Orleans inside the Superdome, nearly a month to the day little brother Trevor did the same with Jennings High in the state championship.

Then reality set in. "Oh no," Phelps realized. "It's against LSU."

Phelps knew what was coming next. He braced for the coming media storm. The narrative was full of the type of intrigue that powers college football.

Here was Etienne, from a small town of about 10,000 people in the heart of LSU country, playing in the national title game in his home state against the program he grew up worshipping.

Indeed, Phelps has been spent much of the past week fielding interview requests, and not just from local outlets; a yellow Post-it note scrawled with the phone number of a New York Post reporter sits on his desk. In every interview, without fail, some variation of the LSU question comes up, and it rolls in again around 3:30 p.m. on Friday:

"When you look back at his recruitment, and (what) LSU did or didn't do, how does it strike you now, three years removed from it?"

Phelps leans forward, folds his arms on his desk and stares deep into his iPhone.

"Look," he says, sighing. His voice takes on an earnest tone. He's had a lot of practice answering this question. Muscle memory takes care of the rest.

The melodrama of Etienne's recruitment has been given new life over the past couple weeks. It's still a sore spot for LSU fans. Last week, a fan threatened Etienne's mother, Donnetta, on social media, imploring her and her family to leave the state within 24 hours.

Jennings is proud of Etienne — but there's little doubt which Tigers team townsfolk will be rooting for Monday. Darrell's, a popular sports bar and restaurant on Lake Arthur Avenue, is a paean to LSU. Photos, newspaper clippings and old jerseys line the walls, including in the men's restroom, where a 'Geaux Tigers' sign hangs above the toilet.

The restaurant's owner, Phillip Boyd, is a diehard. His father, Brad, played tight end at LSU from 1972-74. But he's grown to appreciate Clemson. He's asked Etienne's mother about getting some memorabilia to display, and he makes sure the 60-inch screen inside Darrell's is set to Clemson games on Saturdays — so long as LSU isn't playing.

Boyd sits at the bar at around 4:30 p.m. on Friday, sipping a bottle of Bud Light. The town's dilemma is displayed on the back of his purple shirt. The top says 'Tigers,' with three letters in orange and three letters in gold. The word 'Divided' runs down the middle, bisecting an LSU logo and a Clemson logo that has Etienne's '#9' in the middle.

"People want Etienne to run for 200 yards against LSU," Boyd says. "But (for Clemson) to lose by six points." A man seated three chairs down is less diplomatic. "He's not on LSU," he says, frowning, his arms folded. "He might as well be dead to me."

People in Jennings — especially those inside Darrell's — have little interest in entertaining an LSU loss. A waitress emerges from behind the bar with a sheet of paper and rips off four pieces of clear tape. She sticks the paper to the inside of the side door. It's an advertisement for Hibbett Sports, a local apparel shop:

"If the LSU Tigers win the national championship, championship merchandise will be available Monday at 30 minutes after the game."

Hibbett, around the corner from Darrell's, is mostly empty Friday evening, aside from a woman with two girls clustered in the back by the LSU gear. On Friday, students in the Jennings School District were encouraged to wear shirts supporting Etienne. Monday, students are free to rock clothing supporting whichever Tigers team they please.

Kelli Cormier, the store manager, says she'd been "fighting" to get Clemson stuff for months. Finally, two types of Clemson shirts — one orange, one gray — came in October after she had hounded the company's regional vice president.

They don't sell quite as well as LSU stuff, but around 5:30 p.m., a customer named Kassie Turner strolls to the back wall and grabs a couple of Clemson shirts off the rack. "I'm a Clemson fan," she says. "Well, I'm a Travis fan."

She's going to a Clemson-themed birthday party later in the night. Her wife's granddaughter is turning 5, she says. It's going to be fun.

Down the block from Hibbett, Donnetta sits at a table in a private room in the back of Mr. Gatti's Pizza about an hour later. She's also one of the the birthday girl's grandmothers. Donnetta's smile, framed by purple lipstick and accentuated by her two front silver teeth, is contagious and spreads to the friends and family members surrounding her. The party is fun. Kids in Clemson cheerleader outfits and No. 9 Etienne jerseys skip and run and scream.

The pizza is on its way.

Donnetta is reluctant to talk about LSU and what might or might not have happened during the recruiting process. What's done is done. Besides, her younger son, Trevor, already has an offer from Orgeron.

Tonight isn't about LSU, anyway. Orange and purple balloons reach toward the ceiling. Brynlee Palfrey, the birthday girl, wears an orange bow in her hair, with a white T-shirt emblazoned with a purple '5' and an orange Clemson paw.

Someone points out all of Donnetta's grandchildren are present, and so the family matriarch shuffles to the front of the room. A picture is in order. They all gather around, four girls and two boys, and Donnetta smiles even wider, the room's light now reflecting off her silver teeth.

The threats she received last week are a distant memory, and in this cloistered Clemson universe in southwest Louisiana, LSU country couldn't feel further away.

NEW ORLEANS — Chase Brice is one of the top backup quarterbacks in college football, leading Clemson to a come-from-behind win over Syracuse i…