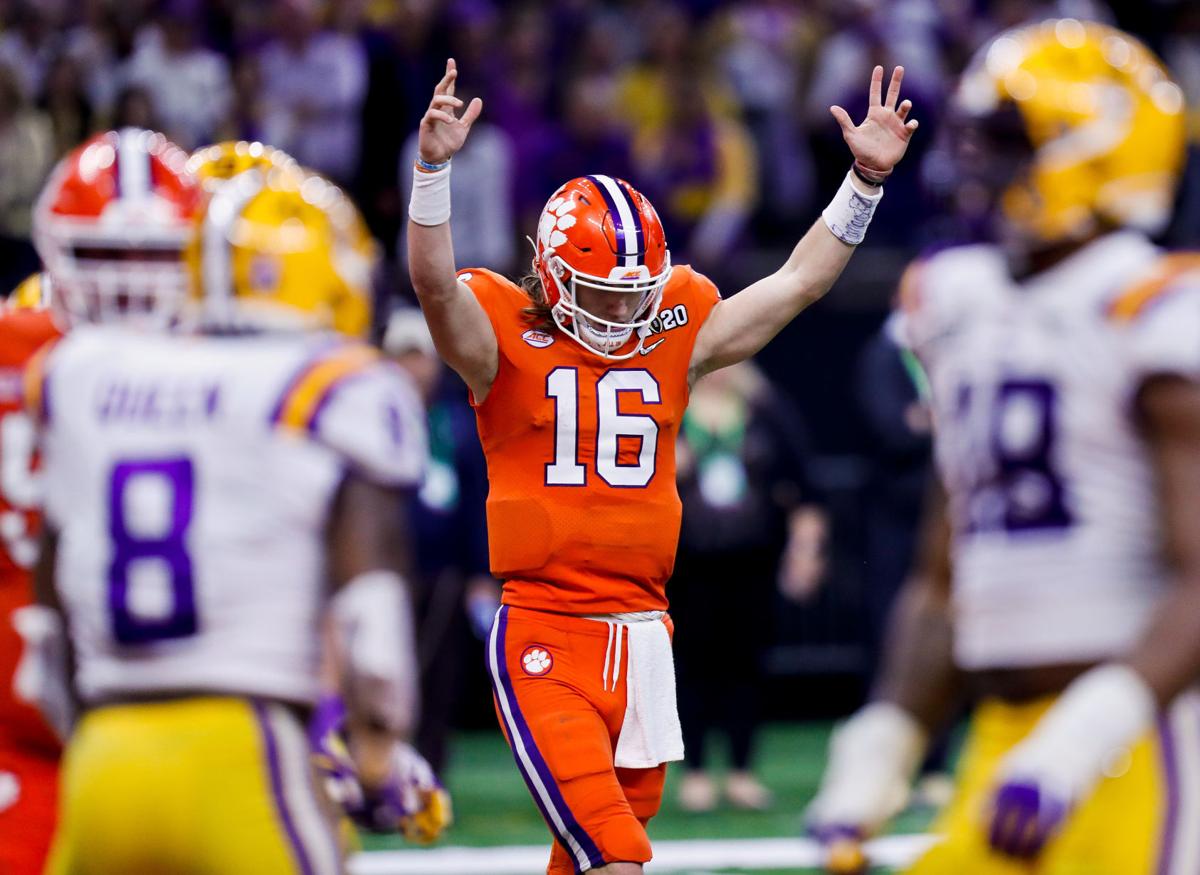 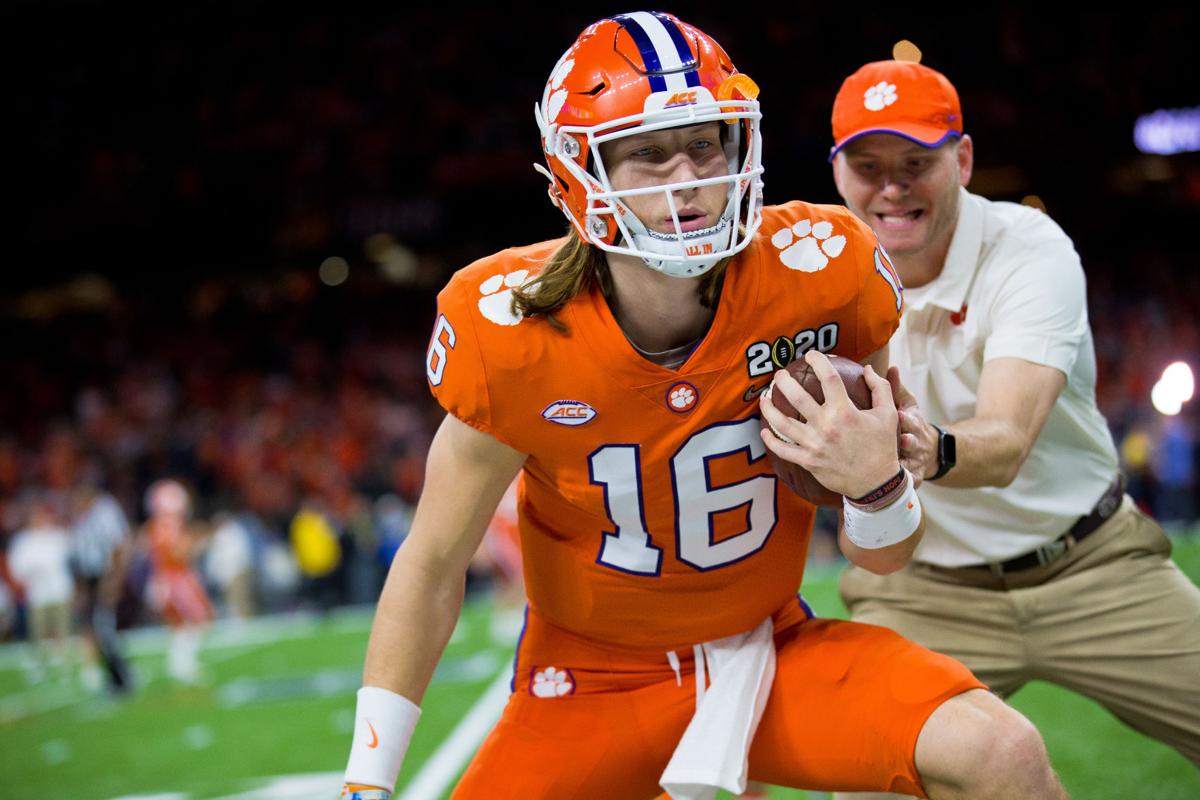 CLEMSON — Trevor Lawrence rarely texts his best friend these days. Carson Murray doesn't take it personally. He knows Lawrence, Clemson's star quarterback, has more important things to worry about. The funny videos and memes can wait. Lawrence, Murray knows, has redemption on his mind for this coming season.

"I expect him to go out there and have a flawless season," Murray said.

Tigers fans would welcome such an outcome, especially considering the 2020 campaign is likely to be the junior quarterback's final college season; he is expected to leave the program early and declare for the 2021 NFL Draft. In his most recent appearance, Clemson's 42-25 loss to LSU in the College Football Playoff national championship, Lawrence, by his own admission, was by outplayed by quarterback Joe Burrow, the presumptive No. 1 pick in the 2020 NFL Draft.

That's precisely why Murray expects Lawrence to hit the field with an edge, starting with spring practice, which began Wednesday.

Lawrence does not take defeat lightly.

"The comeback season," Murray said. "is going to be a thing to remember."

At around 4:30 p.m. Wednesday, Lawrence, dressed in a purple jersey, lay splayed on the turf of the Tigers' indoor practice facility, stretching his quads. Behind him were quarterbacks Taisun Phommachanh (redshirt freshman) and D.J. Uiagalelei, the hyped freshman from California who enrolled in early January.

The trio then jogged to an outside field, where Brandon Streeter, the newly minted passing game coordinator, directed traffic as the three tossed spirals. When it was time to go back inside, Uiagalelei hurdled a tackling dummy in stride.

Uiagalelei is viewed by many as the program's future, a 6-5, 245-pound dynamo whose trimmed goatee belies his 18 years of age. If this season will indeed be mostly devoted to learning for the freshman, who took reps with the third-team offense Wednesday after Phommachanh went with the second team, Uiagalelei will have a unique window into the psyche of the Tigers' star quarterback.

"He looks like a savvy veteran out there," Swinney said of Lawrence. "A guy that's fully focused."

It's the product of an unfamiliar feeling. Lawrence entered his sophomore season after a gilded opening act in 2018, enchanting the college football world with his tour de force in the Tigers' national championship win over Alabama.

All of last season was spent playing under the weight of heavy expectations. It might've had an effect. There was, among some fans and pundits, a belief that Lawrence had taken a step back from his freshman season.

But those critics lacked a meaningful data point. Despite all of the attention paid to Lawrence's interceptions (he finished with eight, all of which came in Clemson's first seven games), the Tigers kept winning and earned a spot in the national championship.

Lawrence helped engineer the game-winning drive in the 2019 Fiesta Bowl, when Clemson bested Ohio State, 29-23. His production dipped against LSU, though. He finished 18-of-37 passing for 234 yards without a touchdown and ran for 49 yards and a score on 10 carries. It was far from a disastrous performance. But on the big stage, for the first time, Lawrence came up short. Critics finally had proof of the kid's fallibility.

And Lawrence had a fresh batch of motivation.

"It's almost easier to come back after you lose that game," he said. "When you win, you're like, 'Alright, let's let the offseason be, like, another week longer, enjoy it.' But you're ready to get back, especially when you lose in that last game."

Lawrence said he spent about a week dwelling on the title loss.

"Then you're sitting around and school's already going so you're having to do school work," he said. "You're like, 'I'm ready to get working and get back with this new team and start building something.'"

Murray recalled a playoff game during Lawrence's freshman year at Cartersville High School (Ga.) It was not Lawrence's finest performance, and on one play he got intercepted. He chased down the ball carrier and was in position to make the tackle, only to get blindsided by an opposing defender.

"That probably would've knocked a regular person out," Foster said. "He shot up, got to the sideline and regathered himself."

Cartersville lost, but something had been ignited inside Lawrence. The Hurricanes would not lose for 42 games and claimed two state championships along the way.

Lawrence, it turned out, responded just fine to defeat.