Associate Athletic Director Natalie Honnen sent an email to Director of Football Nutrition Paul Harrington asking for “verification that all supplements are … certified and PED free.”

School officials also entertained unsolicited theories about the source of the illegal substance, including one fan’s belief the Tigers were victims of food tampering while at the ACC Championship Game in Charlotte.

Emails obtained by The Post and Courier via a public records request show how Clemson over five months investigated the ostarine case between the Cotton Bowl and the NCAA’s denial of an appeal last week.

And the heavily redacted documents — only 33 of them — show what little light Clemson is willing to shed on an issue that cost tight end Braden Galloway and offensive lineman Zach Giella their 2019 eligibility.

Star defensive lineman Dexter Lawrence also was banned from two College Football Playoff games on Clemson’s march to a second national championship in three years. But Lawrence left early for the NFL and was the New York Giants’ first-round draft pick in April.

Fewer than 20 Clemson players were tested as a matter of NCAA random selection routine for a championship football event. There were 125 players on the official roster. 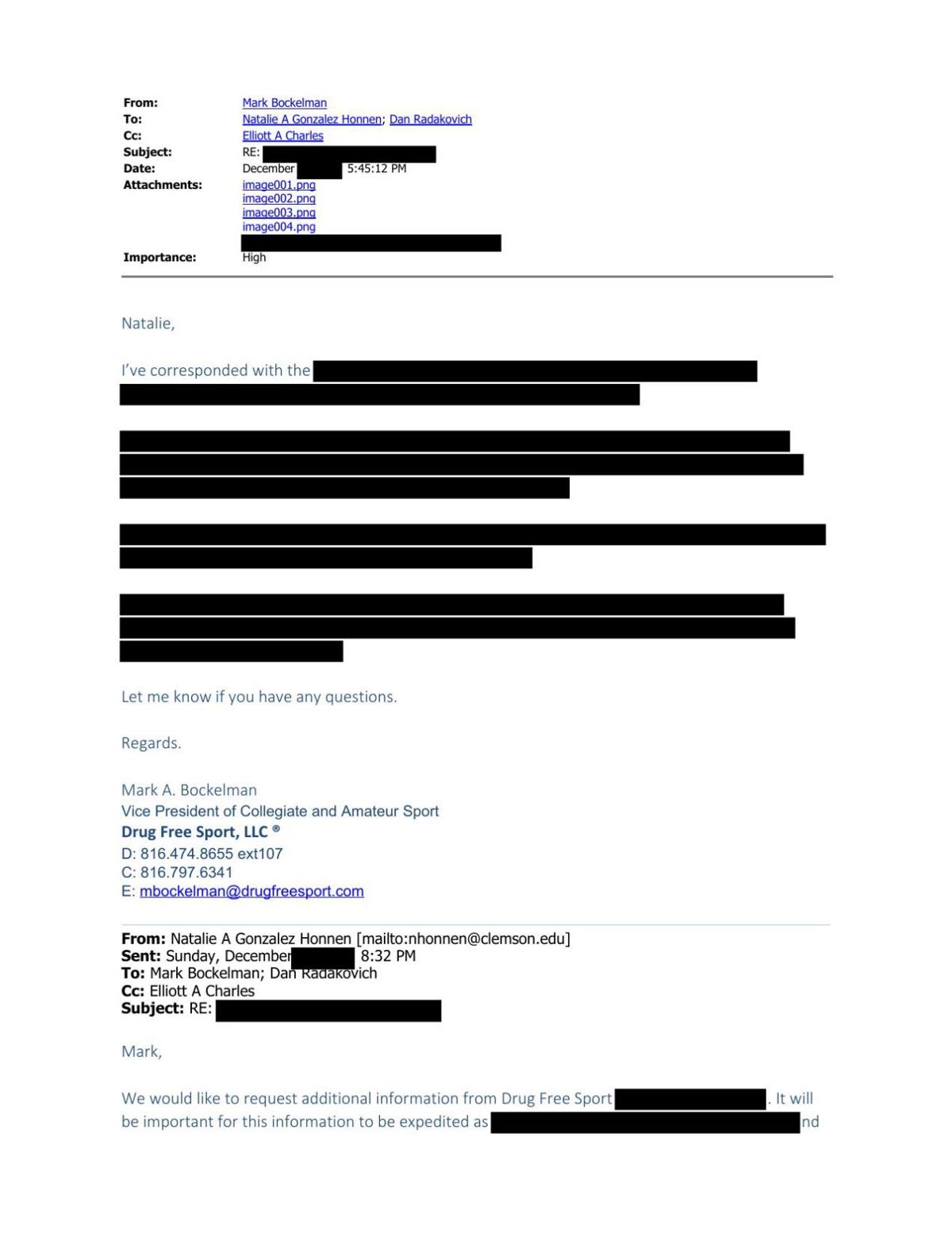 But it did include a pair of emails sent to Clemson with thoughts on how players might have ingested the illegal PED.

“As a side note,” a person whose name is redacted wrote Radakovich in December, “Clemson does a lot of charitable work in hospitals with patients that could put players in jeopardy of being exposed to unknown chemicals.”

Another email was copied to six athletic department officials from a “serious tiger fan” in December. It puts forth the idea that Clemson players may have ingested ostarine as a result of food tampering at a team meal in Charlotte prior to the ACC Championship Game against Pittsburgh on Dec. 1. 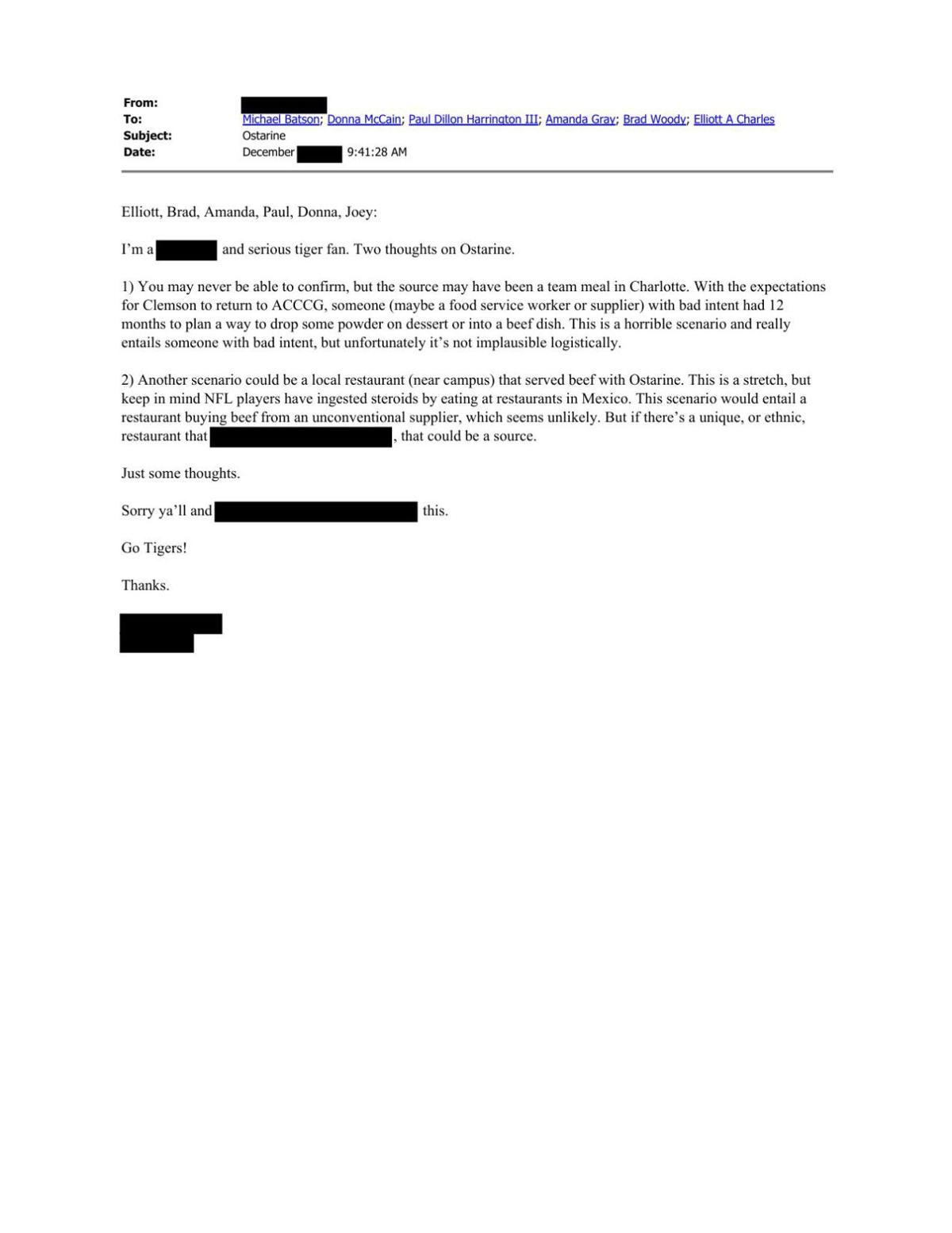 “With the expectations for Clemson to return to ACCCG, someone (maybe a food service worker or supplier) with bad intent had 12 months to plan a way to drop some powder on dessert or into a beef dish,” the fan wrote. “… Another scenario could be a local restaurant (near campus) that served beef with Ostarine. This is a stretch, but keep in mind NFL players have ingested steroids by eating at restaurants in Mexico.” 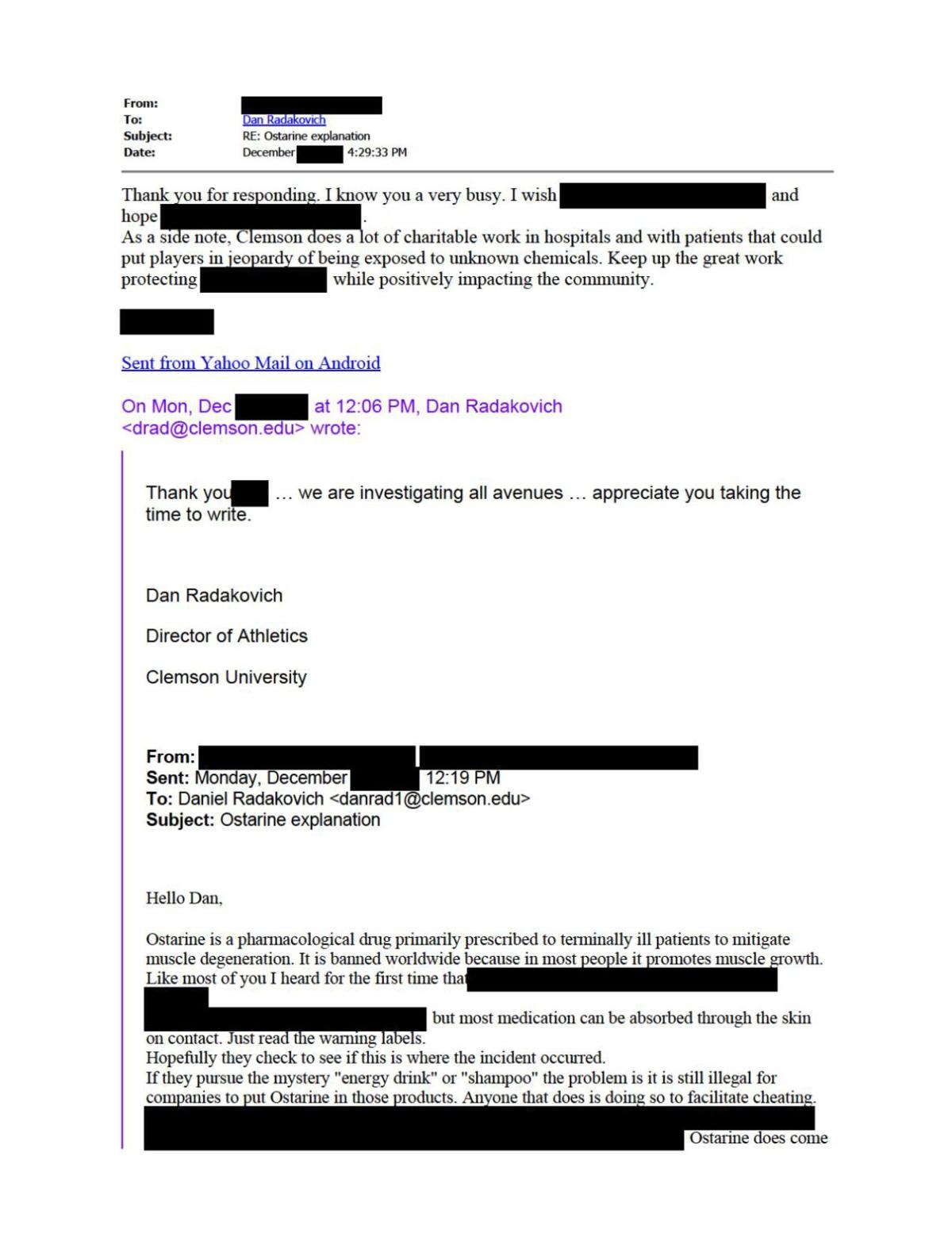 Also in the emails released is a Feb. 4, 2019, warning to all Clemson athletes from Caitlin Davis, Clemson’s Coordinator of Olympic Sports Nutrition.

“As it relates to supplement safety,” Davis writes, “if you choose to consume a supplement that is not provided to you by the athletic department, please reach out to your team dietitian or athletic trainer for safety inquires. THERE IS NO SUCH THING AS AN NCAA APPROVED SUPPLEMENT! The NCAA does not approve any supplements. In addition, just because there are no banned substances listed on the supplement facts label or in the ingredients list, doesn’t mean it’s 100% safe. If you test positive, you test positive.

“Every supplement you choose to take on your own puts you at risk if you do not ask beforehand. So always ask before you buy or take any supplements of any kind.”

Swinney in February told The Post and Courier the school could have given ostarine to the players by mistake.

The Clemson information released also includes three Post and Courier stories about the ostarine case and a memo in which an athletic department official anticipates Radakovich will have to answer questions from journalists and “message board guys” covering the team.

“We will continue to adhere to best practices with respect to supplement use by student-athletes and support the position of the NCAA in its testing for PEDs,” Radakovich said.

Clemson said its athletes have taken 329 tests for PEDs since 2014 and all results have been negative “except for the trace amounts found during the December 2018 tests.”

Representatives of Galloway and Giella last week said the players unknowingly had trace amounts of the PED in their systems and have no idea where it came from.

Clemson and the NCAA have refused to provide access to any test results or define what “trace amounts” mean relative to the standard for a positive NCAA drug test. There is nothing in the provided emails showing Clemson asked for "trace amounts" clarification, unless it was very redacted.

The Clemson case was rare: NCAA records obtained by The Post and Courier show that approximately 1,110 athletes were drug-tested each year for championship events over the last three years with an average of fewer than 10 per year testing positive for PEDs on the NCAA’s banned list.

Feb. 16: Star tackle Dexter Lawrence says he wants to know how PED got in his system

April 29: Clemson releases list of supplements given to football players in 2018