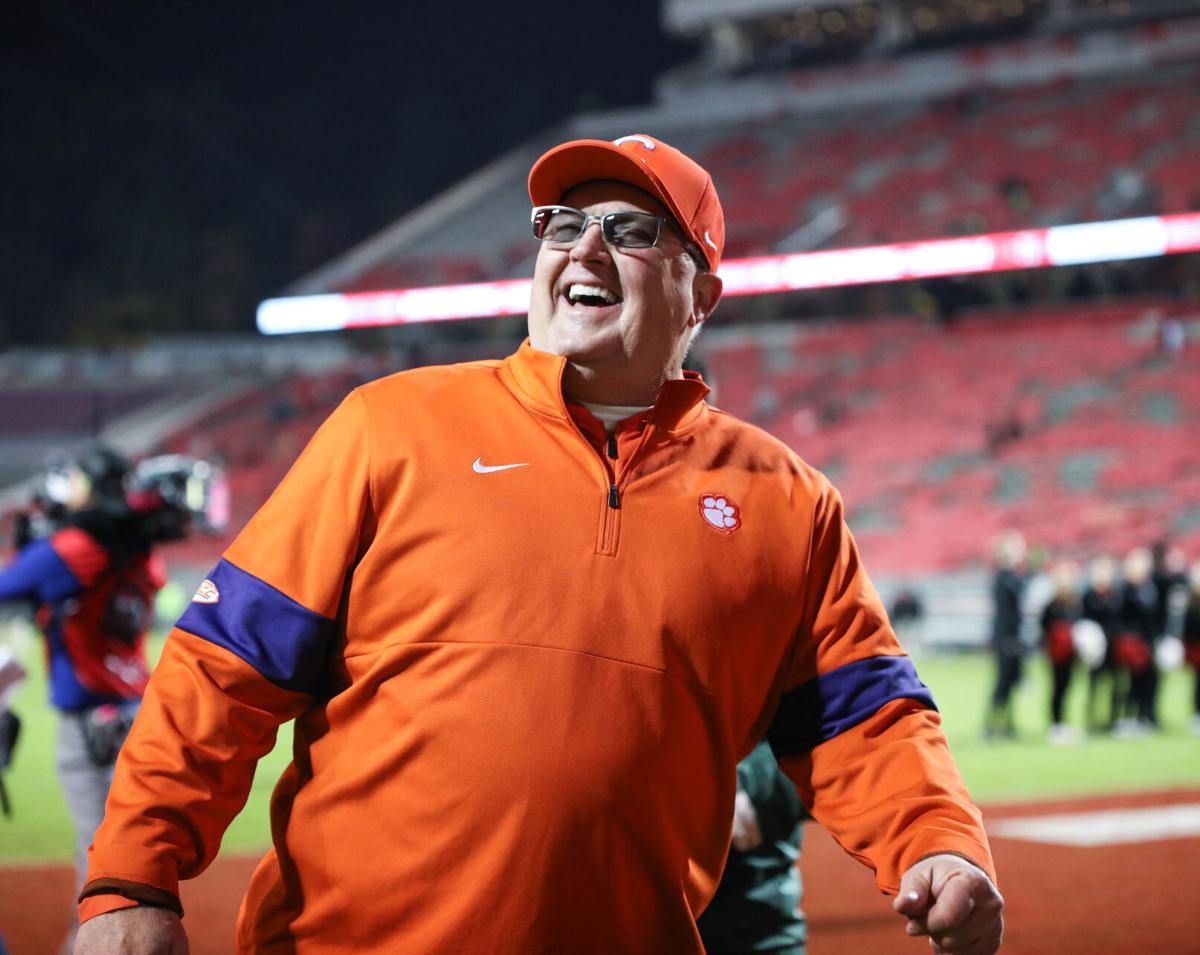 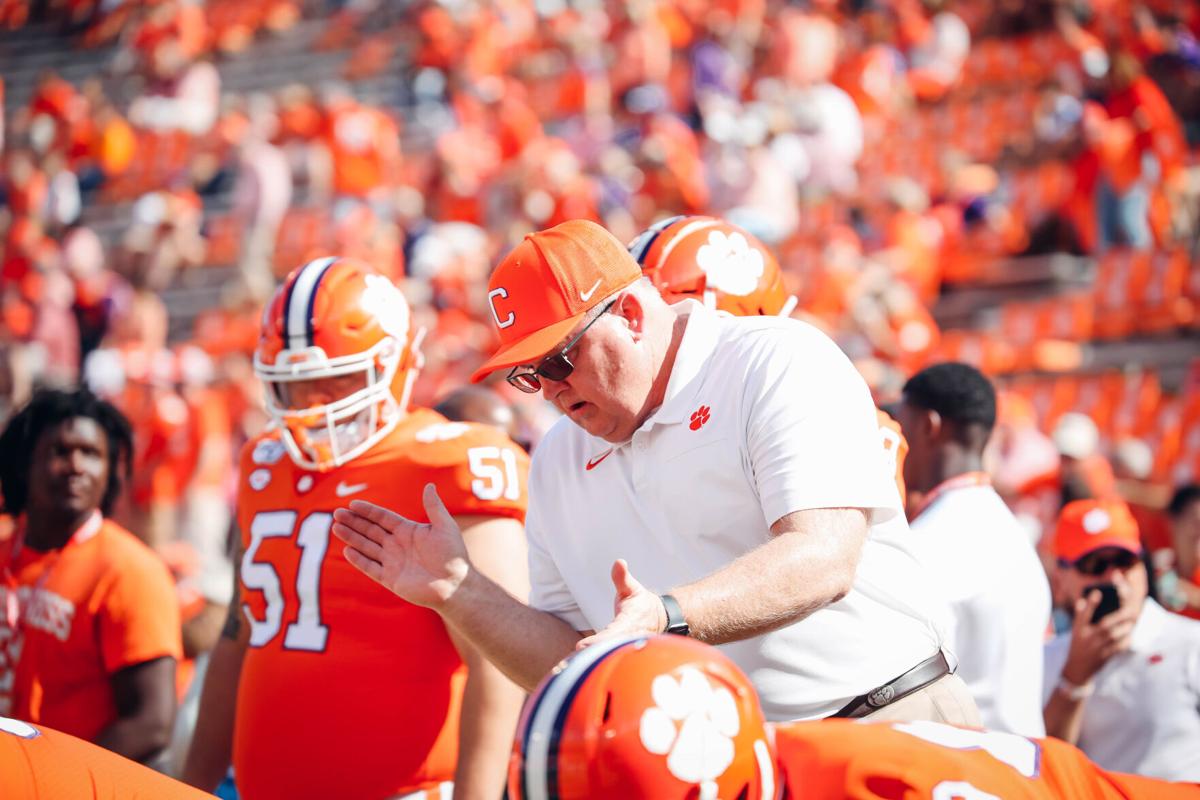 Caldwell got his start at Hanahan High School in 1977. Clemson athletics/Melina Alberti.

Caldwell got his start at Hanahan High School in 1977. Clemson athletics/Melina Alberti.

CLEMSON — Robbie Caldwell basked in a warm memory this summer as he sat around the kitchen table with siblings in their 70s.

"This is so nice that we're all together," he told them. "But it would be nicer if Momma was here making us a chocolate pie."

The Caldwell home on Oak Street in Pageland, a rural town in northwestern Chesterfield County with fewer than 3,000 residents and known for its watermelons, was full of many smells as the children grew up — country style streak, creamed potatoes, fried okra. But Susie Johnson Caldwell's specialty was the chocolate pie covered in meringue.

Caldwell was back in his hometown to grieve with his family in mid-June after a wrenching five-day stretch during which both his brother-in-law and brother died from longstanding health issues.

The Clemson offensive line coach couldn't sink himself too deeply into memories of a more tasty past, though.

Trevor Lawrence, other Clemson football players: 'We want to play'

He had to get back to work.

Caldwell, who's been on coach Dabo Swinney's staff since 2011, spent his summer thinking about how he'd retool a position group losing four of five starters — all the while, the coronavirus threatened to upend the upcoming season.

If there is a college football season, Caldwell will be exposed to large groups of people around Clemson and during travel for games, including one at Notre Dame, which is 700 miles from Clemson. But those close to Caldwell insist the grizzled coach would be fine navigating the health and safety obstacles brought about by the pandemic.

Still, at age 66, the soft-bellied Caldwell is one of the oldest coaches in the ACC and is in the CDC's high-risk group for the virus; 8 out of 10 virus-related deaths have been among adults aged 65 and older, per the CDC.

"Robbie's a healthy guy. He's kind of an offensive-line looking person, but he works hard to try to stay in shape," said Ted Cain, who coached with Caldwell at Furman, N.C. State and Vanderbilt. "He'll be okay. He's a tough hombre."

Cain and Caldwell spent nearly three decades working together, starting at Furman in the 1970s. They were roommates in a house Cain purchased before Cain got married, at which point he politely asked his colleague to move out.

Their wives became friends, and every summer the quartet picnics on the Caldwells' boat and attends a horse race in Aiken.

Those plans were tabled this year because of the virus. Caldwell — who declined to comment for this story through a team spokesperson — takes the virus seriously, his sister Jenell Caldwell said. She said Caldwell is always  lecturing her and older sister Brenda Walker to wear masks outside the house.

SEC commissioner: 'Can we play? I don't know.' COVID-19 pushes college football to the brink

That's in line with his rules-oriented coaching style, said Eric Mac Lain, who played for Caldwell from 2011-15 and is now a studio analyst for the ACC Network. The approach proved helpful, Mac Lain said, as he transitioned from tight end soon after he got to Clemson.

Mac Lain believes Caldwell, who Jenell said has never drank or smoked, provided the discipline he needed to succeed.

"He was very blunt with what was either going wrong or right," Mac Lain said. "There was a certain way to do things. The way that he went about not only his coaching career, but also his playing career, spread through us like wildfire."

That intensity might be part of the reason why Caldwell has been able to stick around so long, Cain suggested. The next oldest Clemson coach, tight ends/special teams coach Danny Pearman, is 55. Wide receivers coach Tyler Grisham, 33, is the youngest.

And Caldwell, who in 2019 became the second active FBS assistant to coach in 500 college games, has always been a loyal hand.

"The makeup of an offensive lineman is a guy who'll just fall on a sword for the program. It doesn't matter what. Just tell me what to do, " Cain said. "I think that's Robbie's makeup, too."

Zach Giella, a Tigers offensive lineman from 2015-18, echoed that sentiment. Giella, an Augusta, Ga., native, grew up on a farm and bonded with Caldwell over their shared love of the countryside. They had a running joke Caldwell would purchase one of the Giella family's goats.

Caldwell called Giella about a month ago. The coach just wanted to check in.

The coronavirus' impact on the season didn't come up in conversation, Giella said. But the former Caldwell pupil didn't doubt the man revered as a Pageland hero would follow the rules after a trying summer.

"He always talked about how he's a company man," Giella said, his voice taking on Caldwell's familiar twang with the last two words. "He's a guy that really cares about who he coaches."

Caldwell will foremost do what it takes to protect his players, Giella said: "And then secondly, himself and his family."