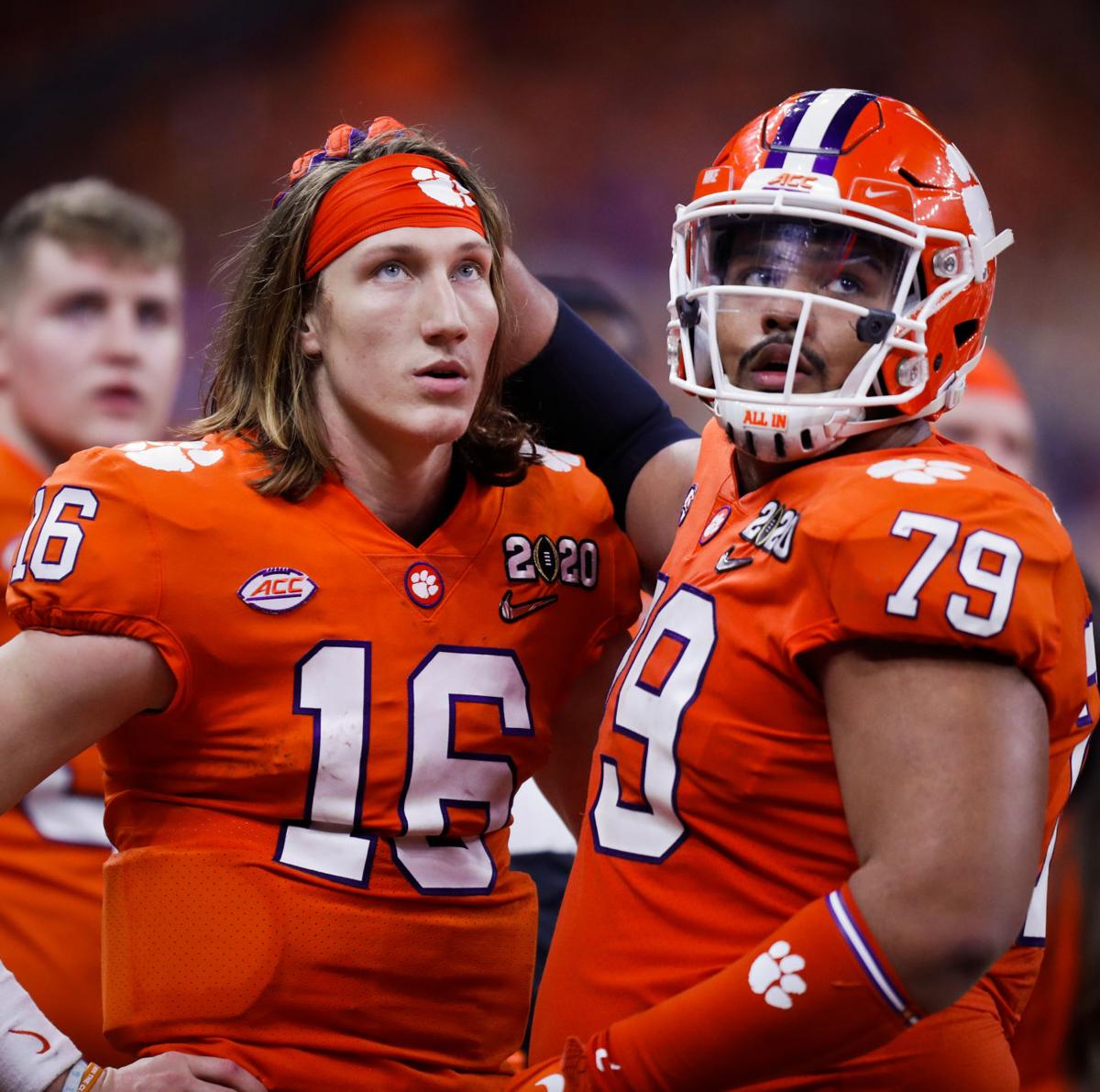 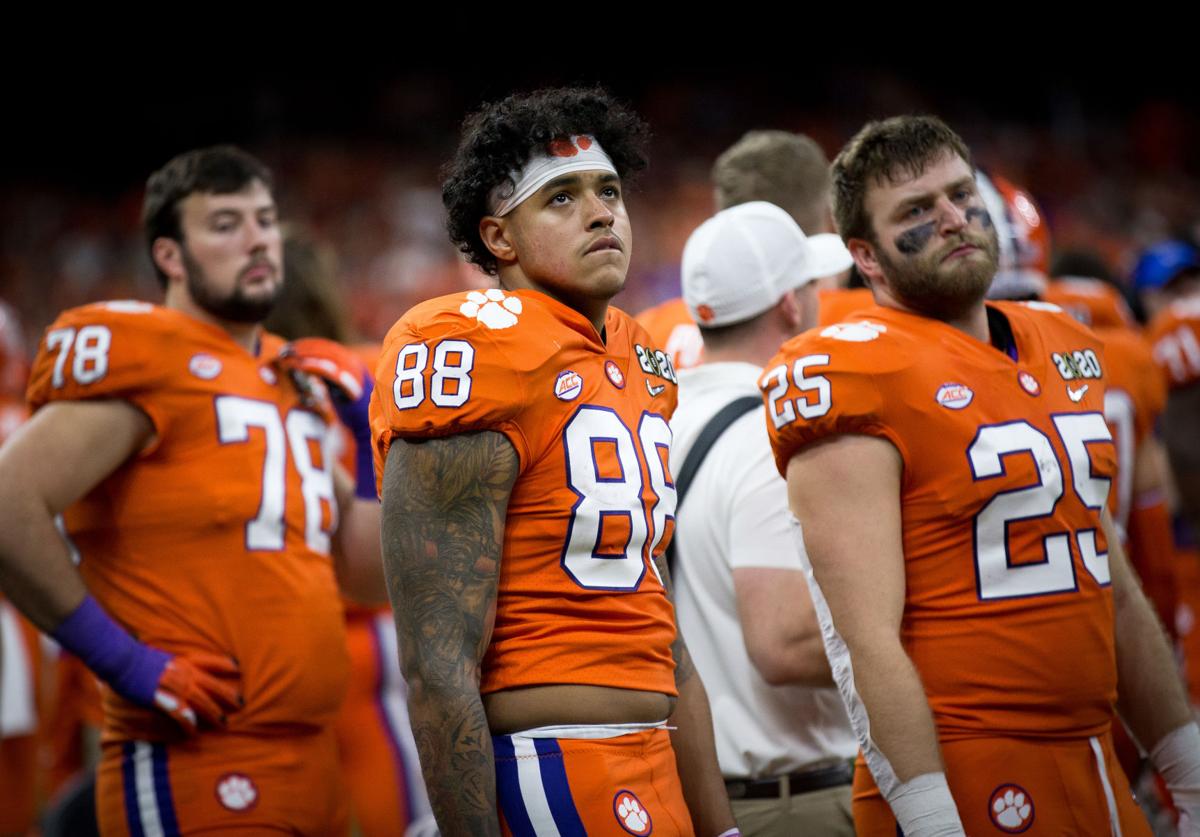 NEW ORLEANS — Trevor Lawrence’s night started with a kiss. It ended in heartache.

The Clemson quarterback, having opened the College Football Playoff national championship scoring with a 1-yard touchdown dash, brought his hand to his mouth and blew a kiss toward the LSU fans looking down on the north end zone he had just conquered.

The gesture did not age well. By Monday night’s end, it was Lawrence and his Clemson teammates nursing hurt feelings, having fallen to LSU, 42-25, in a game that began with fireworks and ended with a Cajun celebration at the Superdome in New Orleans.

Clemson (14-1) had the chance to further its dynastic dreams Monday. Coach Dabo Swinney’s team entered having won two of the last three national titles. But this was the season of LSU (15-0), its broad-shouldered, baritone voiced head coach Ed Orgeron and superstar quarterback Joe Burrow. The Heisman Trophy winner finished 31-for-49 passing for 463 yards and five touchdowns, in addition to setting a new single-season touchdown record (60).

"This is just so special," Burrow said. "I'm kind of speechless."

Lawrence, perhaps the sport’s most recognizable star player in the game with his golden locks, was outmatched. He finished 18-for-37 passing for 234 yards and no touchdowns as Clemson’s 29-game winning streak was snapped.

Clemson players gathered around Swinney afterwards as confetti decorated LSU's celebration: "Hey, listen to me! All of you, hear me on this: I love you guys. I love all of you. Ain't no scoreboard going to change that. I love all you guys and I got your back."

The loss did not fall entirely on Lawrence, though. LSU outgained Clemson, 628-394, putting on an asterisk on what had been a dominant season for defensive coordinator Brent Venables' unit.

Swinney spoke often this season of his reluctance to “wave the flag” for his conference and his program, but he was defending both all the way up to the season’s final day. More ‘respect,’ that seven-letter word so craved by athletes, coaches, fans and Queens of Soul alike, was owed to Clemson, Swinney declared over and over. If there was ever a time for his team to prove itself, it was Monday.

Clemson’s regular season doubled as a giant highlight reel, light on drama and heavy on one-sided football. The team’s one close call — a 21-20 win at lowly North Carolina in September — was held against it the rest of the season. Critics said it was proof of Clemson’s fallibility.

Clemson used the slights as a rallying cry. People were missing out on greatness, Swinney insisted, by focusing on the negatives.

Still, Clemson earned a playoff bid and outlasted Ohio State, 29-23, in the Fiesta Bowl, setting up the showdown with LSU. Swinney didn’t have to conjure flimsy narratives this time. In order to push his program closer to a dynasty, he’d need to lead his team past LSU in the team’s home state.

Early in Monday's game, it appeared Clemson had found the antidote to Burrow's histrionics, forcing LSU to punt away its first two possessions. Then things took a turn. Burrow accounted for four touchdowns (three throwing, one running) in the first half, putting Clemson in a 28-17 halftime hole.

Clemson answered after the break, when running back Travis Etienne — who earlier in the contest set the program rushing record — scored on a 3-yard run. But Burrow struck back. A pair of touchdowns put Clemson in a 17-point hole it never climbed out of.

The game was preceded by an appearance from President Donald Trump and his wife, Melania. The couple walked onto the field to a deafening roar, uniting the LSU and Clemson fans in a shared chant of “U-S-A.”

Partisan fervor took over from there. LSU fans have filled the streets of New Orleans in recent days, and their numbers advantage inside the arena was clear.

Clemson's final possession ended in a Lawrence fumble. The quarterback crouched, taking a moment to himself, before retreating to the sideline, knowing for the first time in his career defeat was imminent.

Safety Nolan Turner led Clemson with 10 tackles, but it was a bittersweet performance for the unheralded redshirt junior in defeat.

Clemson had no answer for Burrow and the LSU offense, but then again, no opponents of Orgeron's team did this season. Monday, LSU averaged 7.8 yards per play and possessed the ball for 34:45.

LSU scored three straight touchdowns to end the half, the last of which — a 6-yard strike from Burrow to wide receiver Thaddeus Moss — put Clemson in an 11-point hole.

Clemson and LSU in the National Championship game at the Mercedes-Benz Superdome in New Orleans on Monday, Jan. 13, 2020.