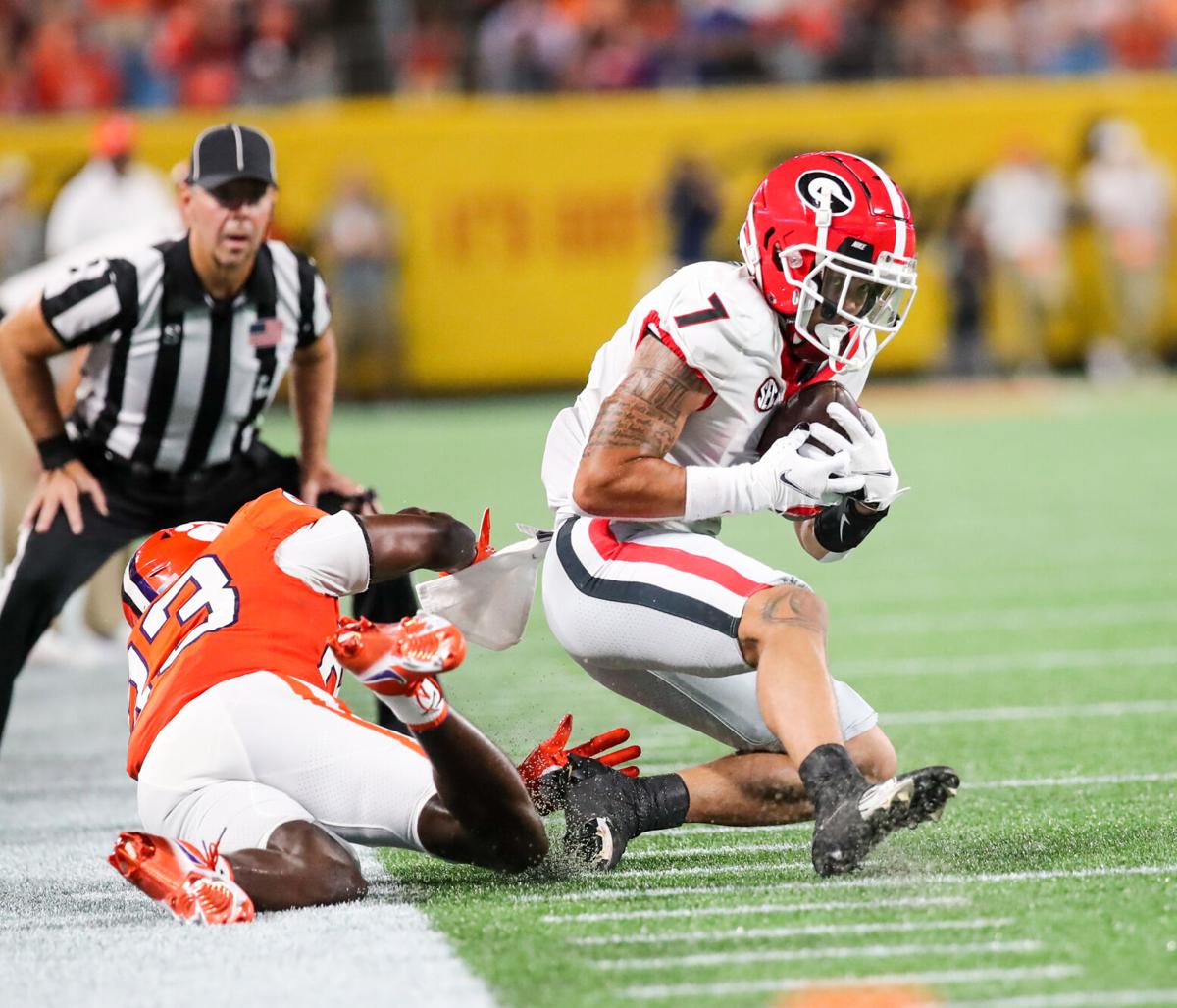 Georgia Bulldogs wide receiver Jermaine Burton (7) is tackled near the sideline by Clemson cornerback Andrew Booth Jr. (23) during the Duke’s Mayo Classic on Sept. 4. Booth has thrived as a tackler this season. File/Artie Walker, Jr./Special to the Aiken Standard 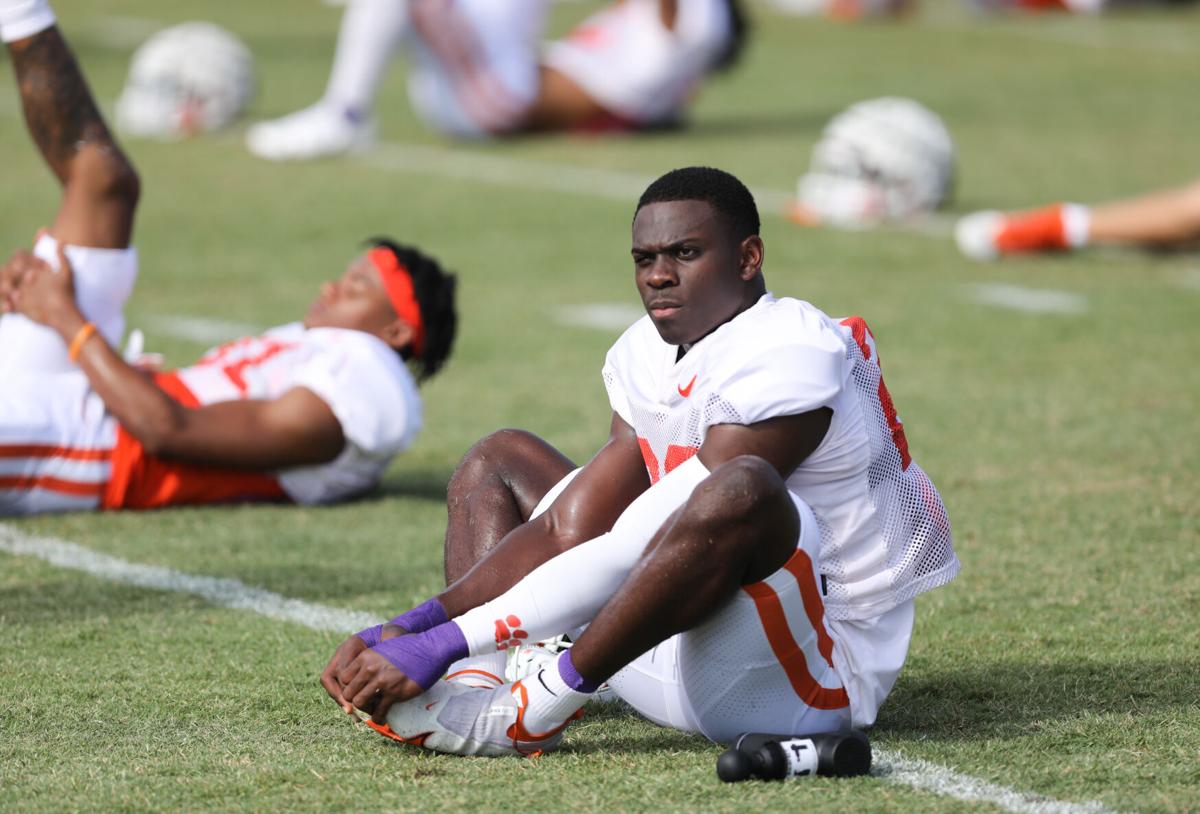 Clemson cornerback Andrew Booth Jr. (23) stretches during the Tigers' practice in Clemson, on Aug. 12. File/Dawson Powers/Special to The Post and Courier

Georgia Bulldogs wide receiver Jermaine Burton (7) is tackled near the sideline by Clemson cornerback Andrew Booth Jr. (23) during the Duke’s Mayo Classic on Sept. 4. Booth has thrived as a tackler this season. File/Artie Walker, Jr./Special to the Aiken Standard

Clemson cornerback Andrew Booth Jr. (23) stretches during the Tigers' practice in Clemson, on Aug. 12. File/Dawson Powers/Special to The Post and Courier

After a win over Boston College, defensive coordinator Brent Venables said he believed Booth was probably the best tackling corner in college football.

“It’s just crazy,” Booth said. “I don’t even know what to say, because I almost don’t believe he said it.”

Booth was shocked because it's a compliment from a coach who is judicious in saying such things. But it's also a compliment that speaks to Booth's real progress as an athlete at Clemson.

Coming into the season, Clemson coach Dabo Swinney was just hoping Booth would be "available," sturdy enough to stay healthy and on the practice field. The knock on Booth was a lack of consistency. As a sophomore, he just spent entirely too much time in the training room, so it was a one-handed interception one week, and then he’d all but disappear the next.

But this year, Clemson’s confident, exceptionally talented No. 1 cornerback hasn’t just played the role of shadow for opposing receivers. He’s been like a human tripwire on ball carriers of all types.

He's sprinting across the field and pursuing a running back on a long-gainer, hooking an arm around an ankle. He's recognizing outside rush and launching himself into a ball carrier's knees, three yards behind the line. He's driving on a receiver’s route over the middle on fourth-and-9, as Zay Flowers essentially took a seat on Booth's shoulder pads and was stopped short of the line.

These are examples of the physicality Booth has always possessed. He had 13 interceptions during his career at Archer High School in Georgia, but Booth also had 162 career tackles.

“My dad, he’s always talking about ‘know your angles,’ and ‘stay low.' 'Go get him,'” Booth said. “That’s just what I’ve been doing my whole life.”

It’s just become a more apparent feature at Clemson, because Booth is on the field more, playing with more confidence.

In the preseason, Booth elicited some laughter as he talked about hot yoga, sitting out in the heat, on a mat, doing what he could to stretch his muscles. Whatever the secret, he's found a way to preserve his body so he can sacrifice it on Saturdays.

But to make this many plays, mental advances had to be made, as well. Earlier in his career, Booth would get beat in coverage, and he’d find himself in his own head. He was suddenly playing not to lose. To not lose games, but also reps.

Booth has freed himself of those concerns. A week after watching N.C. State score some touchdowns in his airspace, Booth had cleared his mind of it. He was on the attack versus Boston College.

"Just not being afraid to lose, lose a rep, whatever," Booth said. "Just being out there, free and just feeling joy."

Booth is just playing looser, reacting quicker because of confidence gained from film study. His teammates on a vaunted Clemson defense can trust the 6-foot, 200-pound cover man to make plays in all facets.

On his takedown of Boston College rusher Alec Sinkfield for a three-yard loss, the Eagles basically chose not to block Booth as the play bent outside. The lone receiver to that side blocked down on safety Nolan Turner, while linebacker Baylon Spector was caught up in the wash at the line of scrimmage.

It was Booth, one-on-one, in a phase of the game some corners don't embrace. Not Booth, though. He chopped Sinkfield down.

“Rarely will we see him miss a tackle. I mean, it’s just really fun to watch,” Turner said. “I told him it’s inspiring. He’s played 100 snaps (at North Carolina State), probably played another 70, 80 (versus Boston College). He just plays his butt off.”

If Booth can add tackles for loss, it can change the complexion of a game. That takedown of Sinkfield put Boston College in a second-and-13 situation, which resulted in a Dennis Grosel pass downfield, which was picked off by Clemson safety R.J. Mickens.

Sure-tackling corners have reinforced the Tigers’ defense in unique ways. Booth not only has 24 tackles, but fellow corner Mario Goodrich, who missed the B.C. contest, has 21 on the year. According to the NCAA’s tackle statistics, Booth and Goodrich are the only pair of corners from the same team with 20-plus apiece.

They've now had a bye week to heal bruises and reset for what’s next. Syracuse is led offensively by a freshman running back, Sean Tucker, who has racked up 638 yards. Pittsburgh comes a week later, led by a dynamic passer, Kenny Pickett.

In both cases, Clemson will need Booth. Against the run or pass, the junior cornerback has made his presence felt.

“I love his attitude,” Venables said. “He’s been healthy, and he’s come to work every day, to compete every day with himself. And that’s what the best of the best, they know how to do. You can’t demand enough out of them.

“They come every day to compete with themselves, and when you do that, you have a chance to tap into something that’s pretty special.”