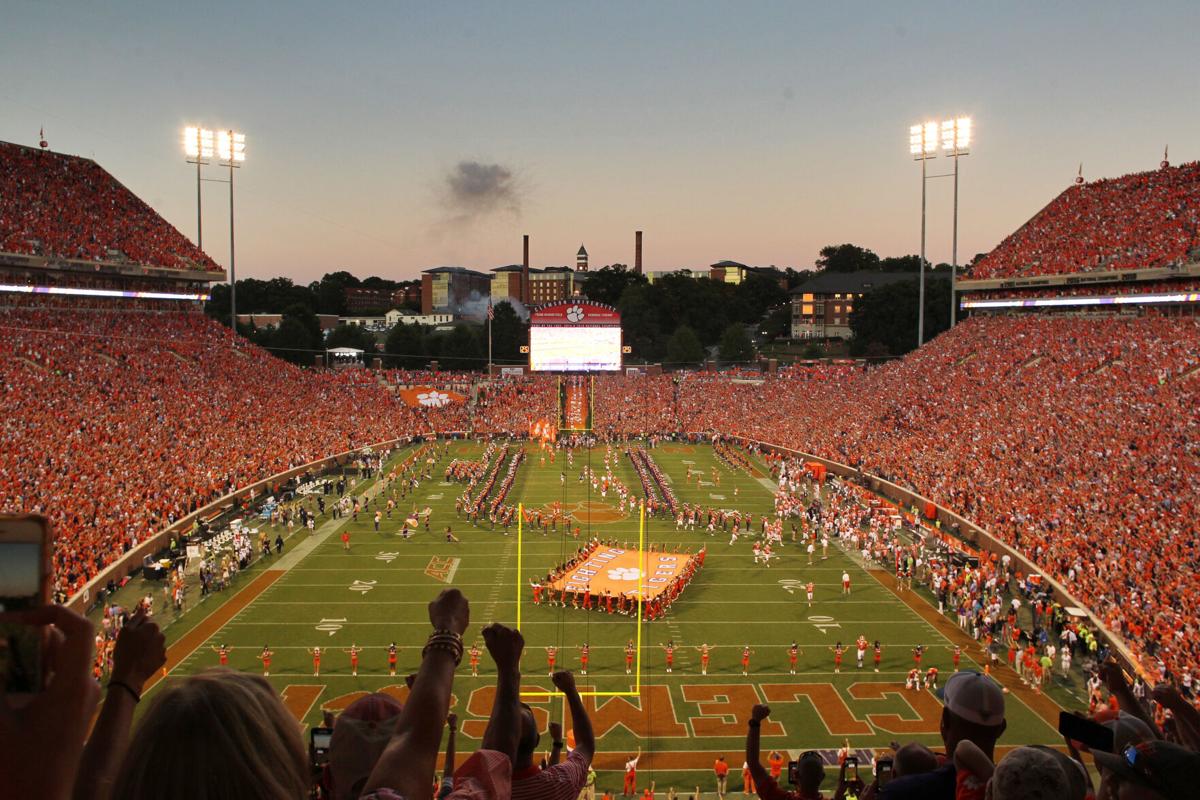 Clemson will allow 19,000 fans into football games this fall. 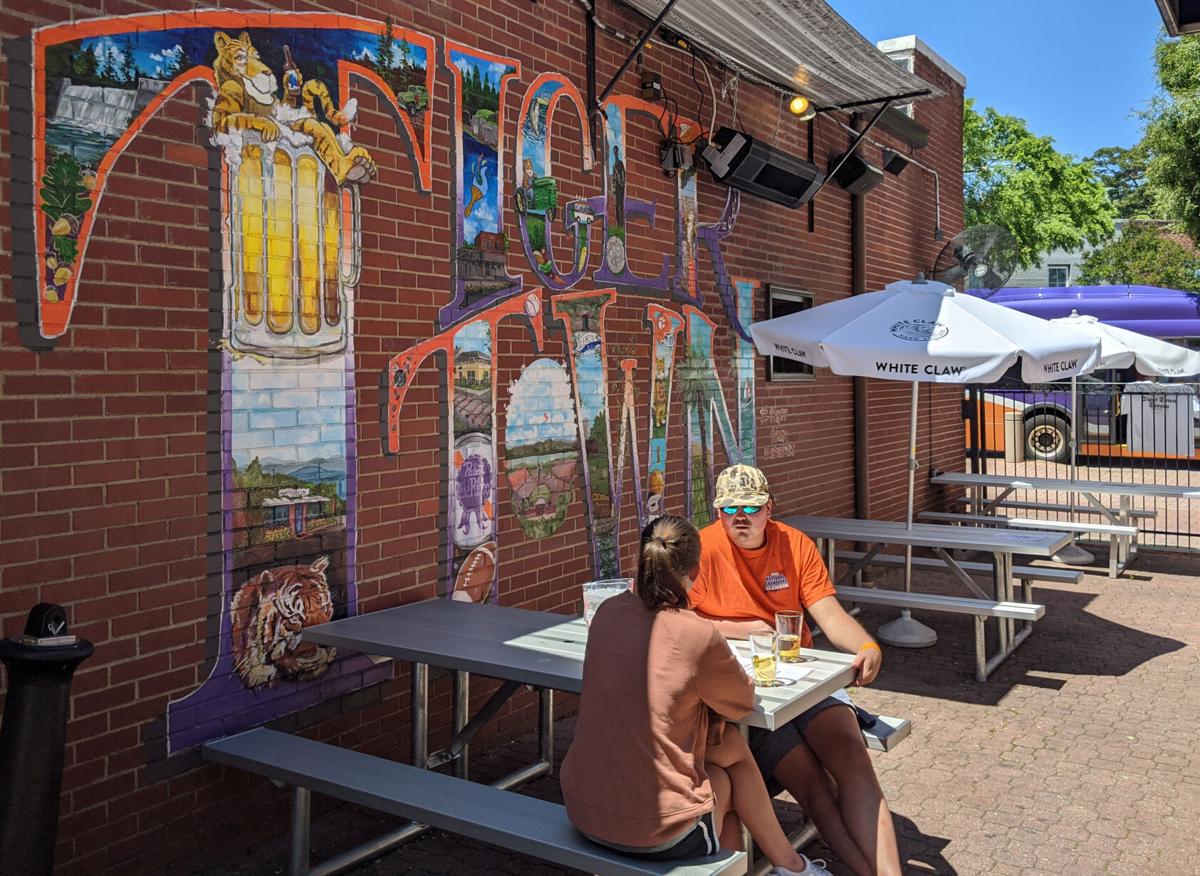 Tiger Town Tavern in Clemson spaced tables apart upon reopening for outdoor service. The debate about holding a 2020 football season on time boils down — as it often does in matters of college athletics — to money. Mostly forgotten in present conversations are small business owners. Susan Cohen/Provided 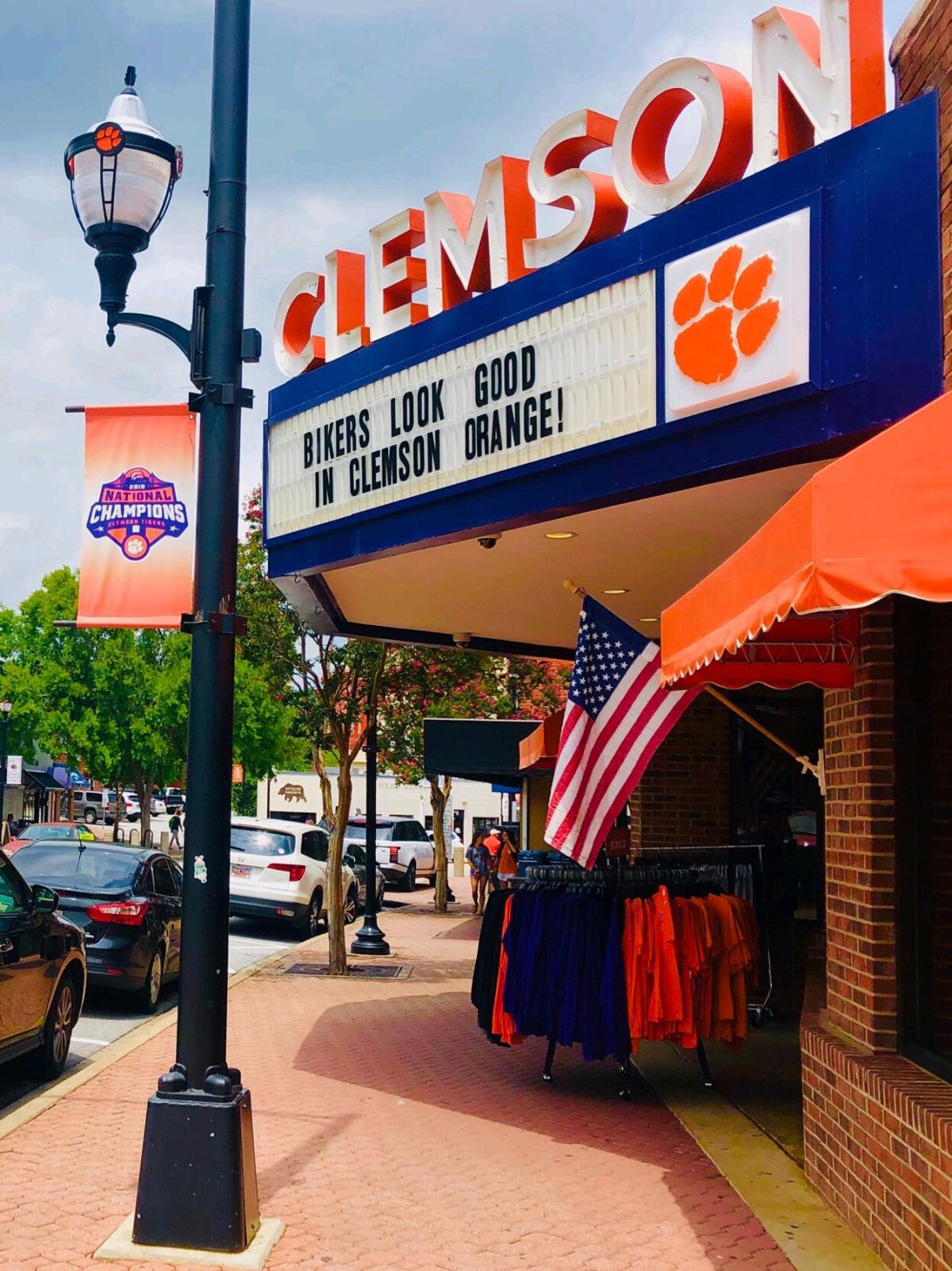 Downtown Clemson businesses are hoping for some semblance of normalcy this fall. Susan Cohen/Provided 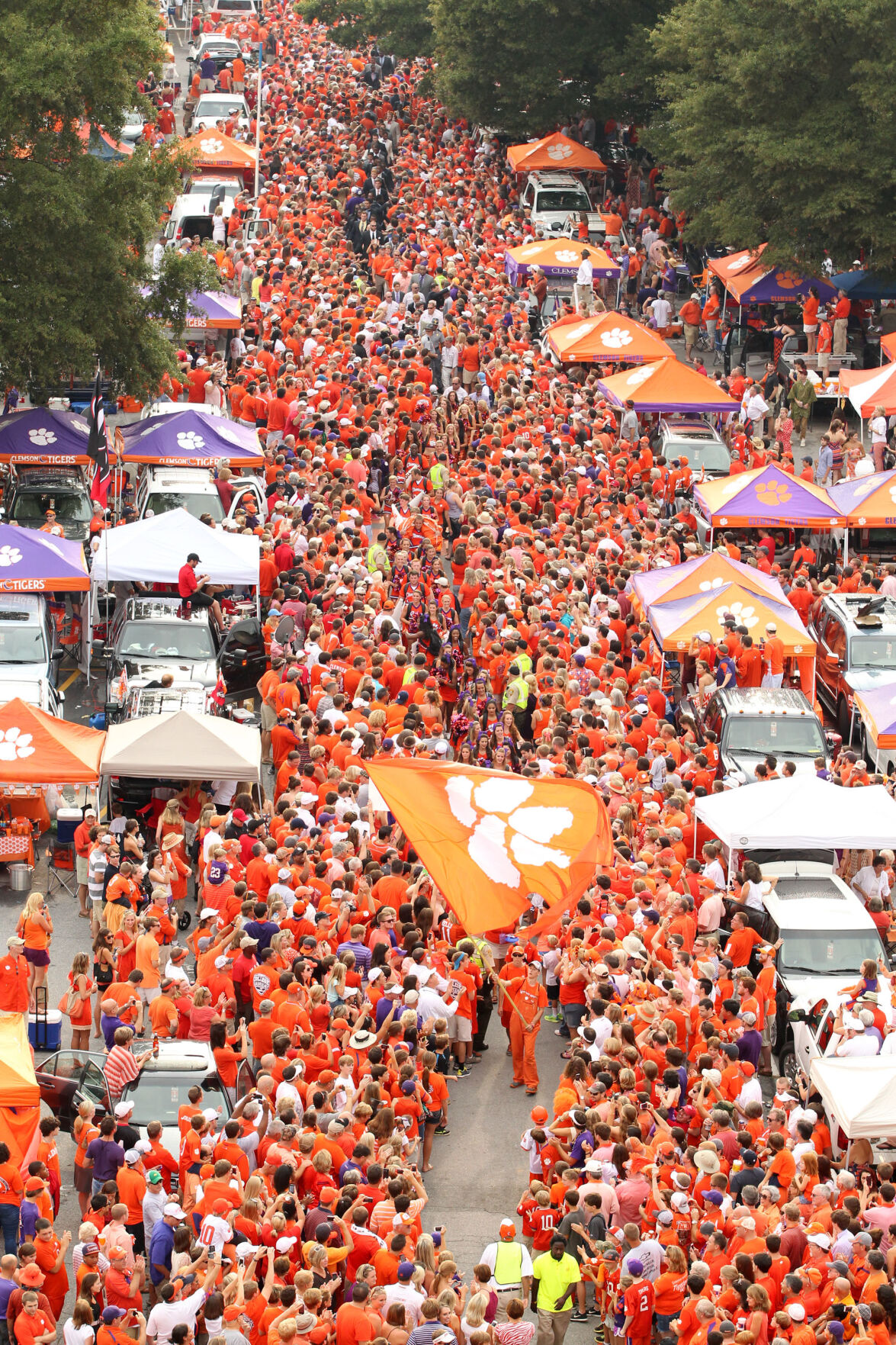 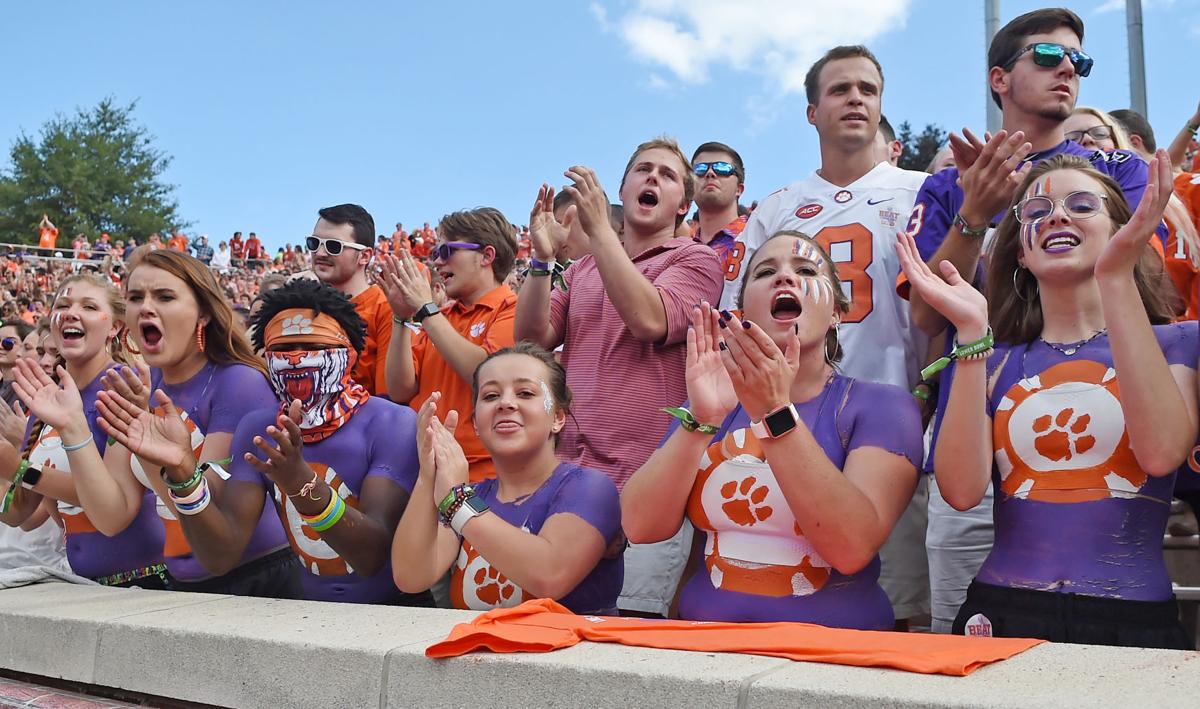 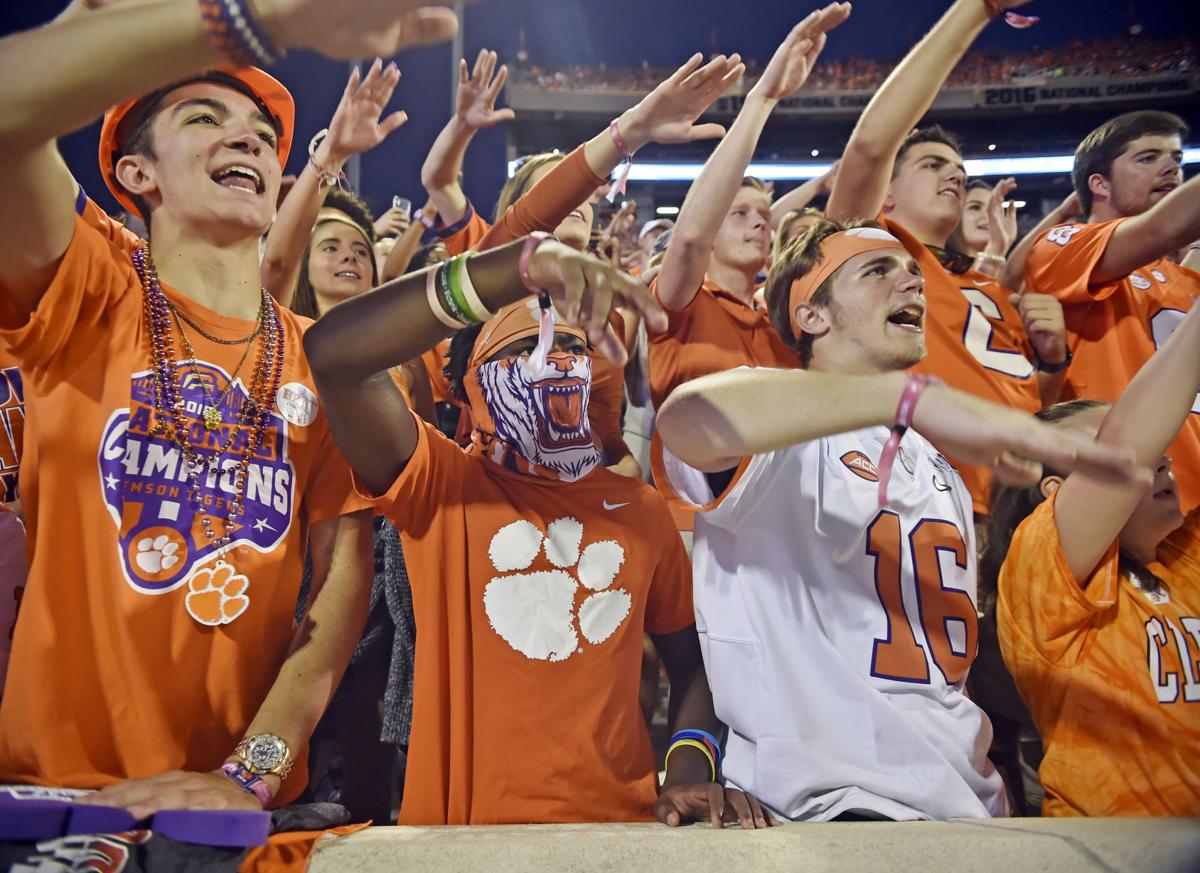 Clemson will allow 19,000 fans into football games this fall.

Tiger Town Tavern in Clemson spaced tables apart upon reopening for outdoor service. The debate about holding a 2020 football season on time boils down — as it often does in matters of college athletics — to money. Mostly forgotten in present conversations are small business owners. Susan Cohen/Provided

CLEMSON — For Steve Poteet, loyalty is a potent factor in the business world. But virtues can be difficult to maintain amid the economic fallout of a deadly global pandemic.

Respect was what bonded Poteet to the late Marvin Henry Frank, who hired him as a Western Kentucky freshman to be a salesman in his clothing store, and for whom he spent a year crisscrossing the country to work in different locations, from Kentucky to Ohio to Michigan to Kentucky (again) to Alabama.

Poteet finally landed at the Clemson M.H. Frank location in 1973, which he bought out from his mentor in 1990. As a store owner, he's paid forward the values Frank instilled in him, keeping the same manager for 30 years. This year, he intended to promote another longtime part-time employee to full-time work.

That plan has been put on hold.

The debate about holding a 2020 football season on time boils down — as it often does in matters of college athletics — to money. The new twist is the coronavirus threatens to upend the present college sports model, in which entire athletic departments subsist on football television contracts.

Sapakoff: Post-COVID college sports will be survival of the fittest, richest

Mostly forgotten in present conversations are small business owners, many of whom depend on increased traffic on fall football Saturdays. That's especially true in Clemson, a sleepy, rural town of about 17,500 blanketed with the orange paw that coach Dabo Swinney's team has turned into a national symbol.

Such is the reason for Poteet's concern. Dominoes pointing to an unconventional autumn keep falling. There are reports indicating the ACC plans to follow the Big Ten and the Pac-12 in instituting conference-only football schedules, and more drastic measures are being bounced around.

Last Thursday, Clemson emailed a survey to season-ticket holders asking, among other things, if in a worst-case scenario they'd prefer a fall season without fans or a spring season with fans.

Football in the fall without fans? Or the spring with fans? Clemson ticket holders weigh in

M.H. Frank, located on College Ave., could survive a fall without football, Poteet said. He saves his money, and the traditional men's clothing store attracts customers 12 months of the year.

Some of his peers, he warned, might not be as fortunate.

"I think it would be devastating to the city of Clemson," Poteet said. "The ones that are barely hanging on are not going to be there. They won't be there at the end of the year, which saddens me terribly."

Susan Cohen, president of the Clemson Area Chamber of Commerce, echoed that sentiment.

"Those seven football weekends are millions and millions of dollars of economic impact per ballgame," she said. "We've looked at a lot of scenarios, whether it's football with no fans, football with some fans or football as we know it. Anything short of no fans will certainly help.

"We just have no indication from anybody yet what it's going to be. The next hurdle to get over, like I said, is to get students back in town."

'How many blows can you take?'

Clemson is set to resume in-person classes Aug. 19, with some policies in place to guard against the virus.  The campus, normally bustling with nearly 25,000 students and thousands more employees, has been mostly empty since mid-March.

A sleepy fall could cause irreparable damage. Shawn Cartmill, manager of Tiger Sports Shop (TSS), estimated most retail stores make "the majority to at least 40-60 percent" of annual business on those seven football Saturdays.

"You're looking at businesses that were doing business like they were in New York," Poteet said. "If you got hit again with no football season, how many blows can you take before you go down?

Cohen pointed to hotel revenue as a metric from which overall economic health can be extrapolated. On weekends of home football games, hotels normally require a two-night (or more) minimum, and people in town are likely to shop at local stores, eat at local restaurants and fill up at local gas stations.

"That economic impact goes up, and you're typically looking at three times whatever that hotel revenue expenditure is (per person)," Cohen said.

Last fall, Clemson-area hotels brought in about $65,000 in gross revenue on non-football weekends. Assuming people spent two nights in hotels, that figure ballooned to around an average of $650,000 during the seven football weekends, peaking at an estimated $751,200 for the weekend of the Texas A&M game (Sept. 7).

And that's not taking into account people who spent a third night in a hotel, Cohen added, or those who slept in an Airbnb, Vrbo or other short-term rental.

There's no doubt the Tigers' success under Swinney — Clemson has played in four of the last five national championship games (and won two) — has been a bonanza to the town's economic health, coined a while back as "Dabonomics." It's also helped create a real estate boom, with wealthy alums purchasing second homes in the Upstate.

Swinney knows this, and it's why he's long opted against scheduling neutral site games (though Clemson recently signed on to play Georgia in Charlotte in 2021 and Atlanta in 2024).

"I don't mind if somebody else wants to give up a home game, but I'm adamant and really believe wholeheartedly we need to have our maximum number of games here at home every single year," he said in 2018. "For the community of Clemson, and Greenville, Anderson and Seneca, because everybody benefits from that."

The benefits would be even more profound this fall for an area still reeling from the spring and slumping through the summer. Some weathered the statewide shutdown better than others; M.H. Frank, for example, implemented 'virtual shopping,' with customers FaceTiming with employees walking through the store. Some restaurants ameliorated losses by offering curbside pickup, porch delivery and 'meal kits,' and people were encouraged to purchase gift cards.

Others have been hit harder. Sidewall Pizza, a chain on Tiger Boulevard, has remained closed. Amici, a pizza place across the street from campus, has said it will not reopen until students return, according to Cohen.

All have reopened except for Backstreets, which is undergoing renovations. But obstacles remain. As of last Wednesday, South Carolina had totaled more new coronavirus cases per million residents in the previous seven days (2,300) than any other country in the world, and trailed just Florida and Arizona among U.S. states.

In response to the surge, Gov. Henry McMaster on Friday announced a new executive order restricting the sale of alcohol past 11 p.m.

An orange and purple world

There's some hope that measure — along with a renewed push for individuals to wear masks — could bring numbers down, perhaps enough for a football season to be held on time with some fans.

Cartmill, the Tiger Sports Shop manager, is choosing to be optimistic. TSS has two storefronts in two, and Cartmill said plans to expand to a Pendleton location in August remain in place.

Like Poteet, loyalty is an important virtue for Cartmill. He played soccer at Clemson under head coach I.M. Ibrahim, who founded TSS in 1974. Cartmill looks forward to those busy fall Saturdays, during which he directs store traffic and jokes with fans young and old. He flashes the two national championship rings he won under the late Ibrahim — from 1984 as a player, 1987 as a coach.

He believes some form of that festive atmosphere will run through town this fall. Cartmill said he's been in discussion with several others in the local business community, some of whom are "affiliated with the athletic department."

"We'll probably play all of our ACC games, plus South Carolina and plus Notre Dame. Those are the expectations. I'm giving an 80 percent confidence level to those games being played," he said. "I'm optimistic we'll have about half (of fans)."

Cartmill insisted he doesn't have any "special insight" into the thinking of Swinney or athletic director Dan Radakovich. Rather, his disposition is rooted in the ethos of a community that's become accustomed to victory.

It's easy to look on the bright side in an orange and purple world.

"Clemson is a really positive atmosphere. We are gung-ho, get things done, move forward, take on challenges types of people." he said. "It's so much of a Dabo Swinney effect."

Such a scenario would be a welcome balm to Clemson businesses, many of which have instituted social distancing guidelines and face mask requirements. And on June 24 the Clemson City Council passed an ordinance requiring face coverings in public areas.

Some in the state have professed an aversion to wearing face coverings, though, and the rate of positive cases has hovered around 21 percent in July, per the South Carolina Department of Health and Environmental Control.

The caption was light on subtlety: "Follow our lead. Do your part. Mask up!"