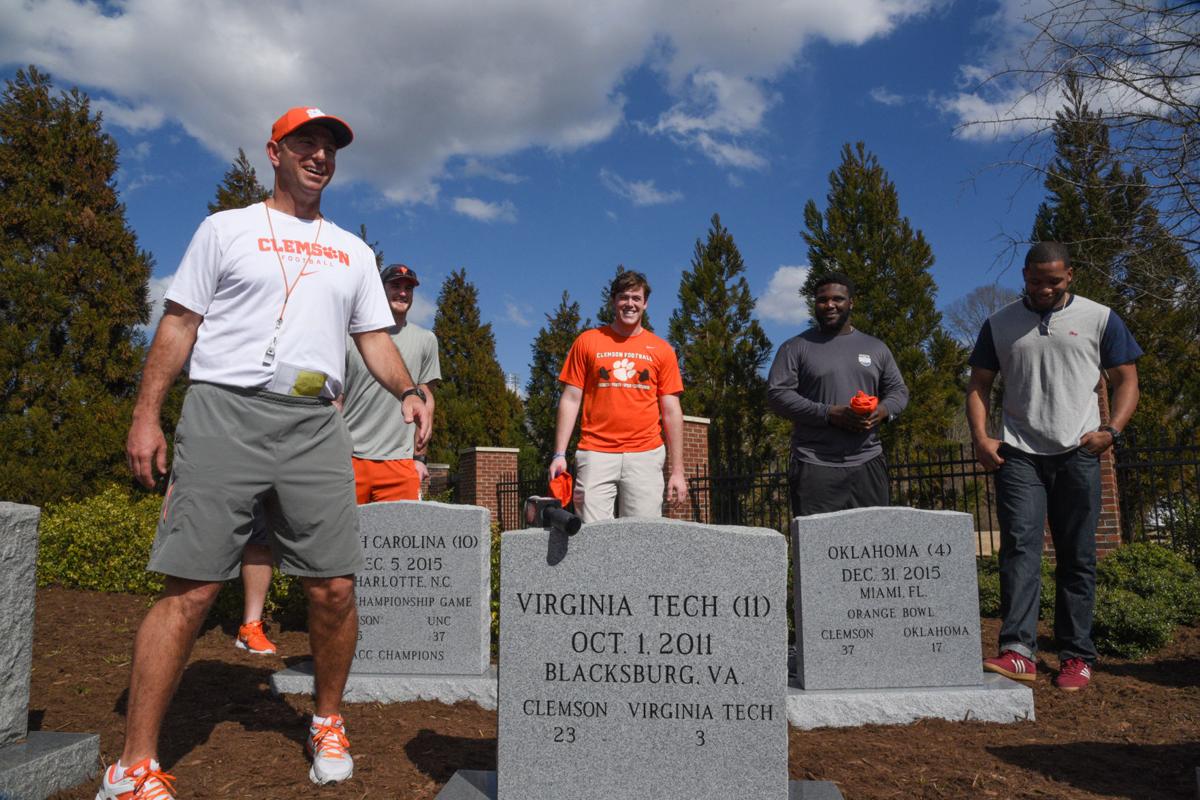 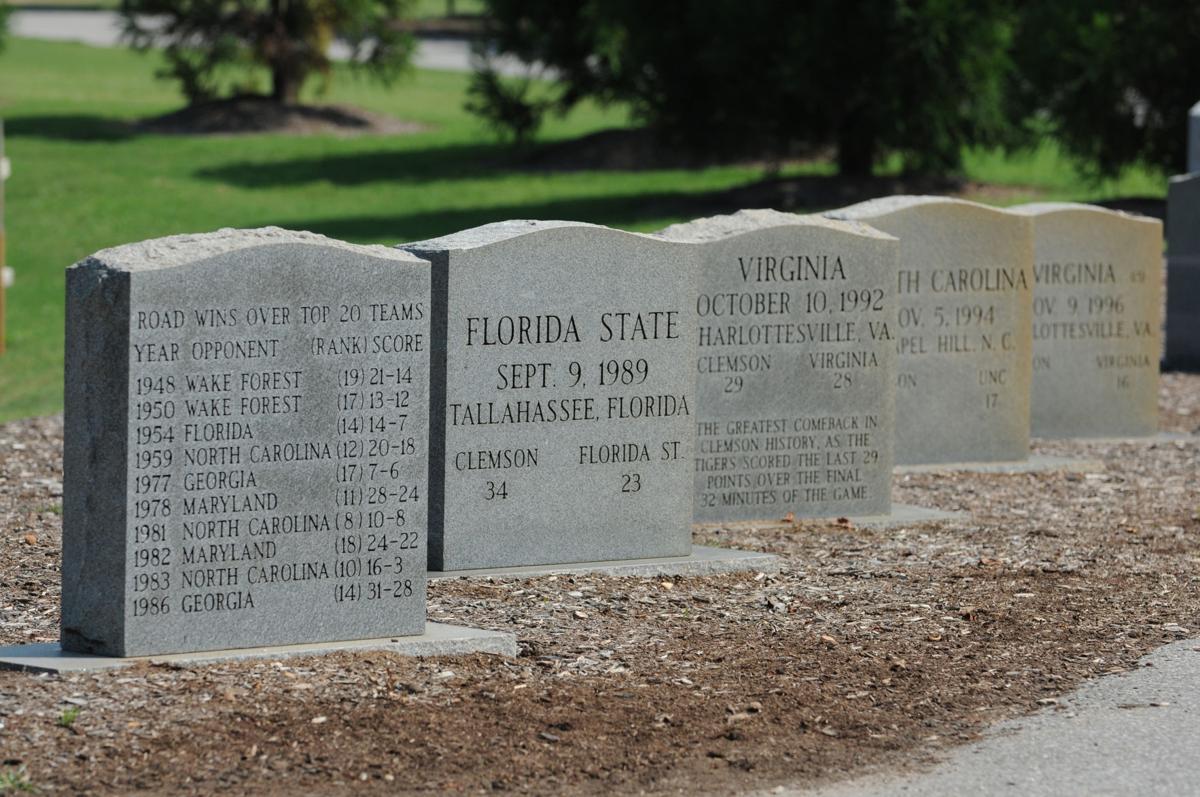 Clemson adds a tombstone to its football graveyard on campus for every victory over a ranked opponent on the road or at a neutral site. The tradition began with a 1989 upset of Florida State in Tallahassee. Clemson University/Provided 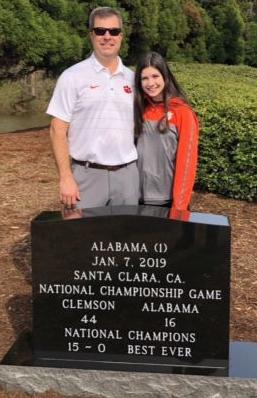 Van Kornegay, co-owner of Kornegay Funeral Home in Camden, stands with his daughter Caroline after the spring unveiling of the latest tombstone added to the Clemson football graveyard, a celebration of a 44-16 victory over Alabama in the national championship game in January of 2019. Kornegay has produced Clemson's tombstones for 20 years. Provided

SCOTTSDALE, ARIZ. — The Fiesta Bowl on Saturday night is booked for Glendale, Ariz., not Tombstone, Ariz.

Either way, major morbid confrontation history is on Clemson’s side.

With a victory over Ohio State in the College Football Playoff semifinal, the Tigers would not only advance to another national championship game but also expand the team's graveyard.

The Graveyard, a quiet spot near Clemson’s indoor practice building, commemorates road or neutral site wins over teams ranked in the Top 25. That includes the latest addition from the Kornegay Funeral Home in Camden, a 44-16 national championship game victory over Alabama notched last January.

The glory of Santa Clara, Calif., is chiseled into 1,500 pounds of shiny black granite.

“It’s awesome,” quarterback Trevor Lawrence said. “It’s kind of a tangible thing you can see that you were a part of and that will be there forever.”

Next on the hit list: Ohio State, ranked No. 2.

“I love The Graveyard,” 2019 All-America linebacker Isaiah Simmons said. “It reminds you of the memories of those games and burying those teams. We always look forward to the tombstone games. And these next two happen to be tombstone games.”

Clemson has added 21 tombstones to The Graveyard since Dabo Swinney became head coach in 2008. Another is already on the way thanks to a 62-17 win over No. 22 Virginia in the ACC Championship Game on Dec. 7 in Charlotte.

“It just shows the progress we’ve made as a program,” senior tackle Tremayne Anchrum said.

The tradition started with a 1989 game at Florida State, a 34-23 Clemson win during head coach Danny Ford’s tenure in which the late Wayne Simmons of Hilton Head scored on a 73-yard interception return.

The opponent was no coincidence: Florida State won at Clemson in 1988 thanks to a fake punt play (the famed “Puntrooski” Game); the Seminoles celebrated major road victories by tearing out a chunk of the opponent’s field for its Sod Cemetery.

At first, The Graveyard honored only Top 20 road wins but has expanded to include any Top 25 win away from home.

Van Kornegay has been Clemson’s graveyard go-to guy since 2004, paid by the school athletic department.

“Friends of mine will be at a big road game Clemson wins and they’re texting me with ‘Get another tombstone ready,’ ” Kornegay said. “Then pretty soon after that my phone rings. I see that 864 area code on the incoming call and I know its Clemson calling saying, ‘Hey, we need you.’ ”

Neither Kornegay nor Clemson would say how much the tombstones cost or who pays for them.

The next unveiling likely will take place in March, per Swinney’s annual preference. The more tombstones added, the more The Graveyard gains popularity as a campus photo op attraction.

Will Swinney, Dabo’s son and a Clemson junior wide receiver, grew up enjoying walks through The Graveyard.

“There used to not be as many tombstones out there as there are now,” Will Swinney said.

Almost everyone on this Clemson team has two favorite pieces of granite: the ones unveiled after the 2016 and 2018 national championship game wins over Alabama.

They’re hoping Kornegay gets two more tombstone orders over the next few weeks.

'The Graveyard' at Clemson

What: Tombstone collection commemorating Clemson football wins over Top 25 teams on the road or at neutral sites

Where: On campus near the Reeves Football Complex

Founded: 1989, but some games added retroactively

Tombstones added since Dabo Swinney became head coach in 2008: 21 (another due with an ACC Championship Game win over No. 22 Virginia on Dec. 7)