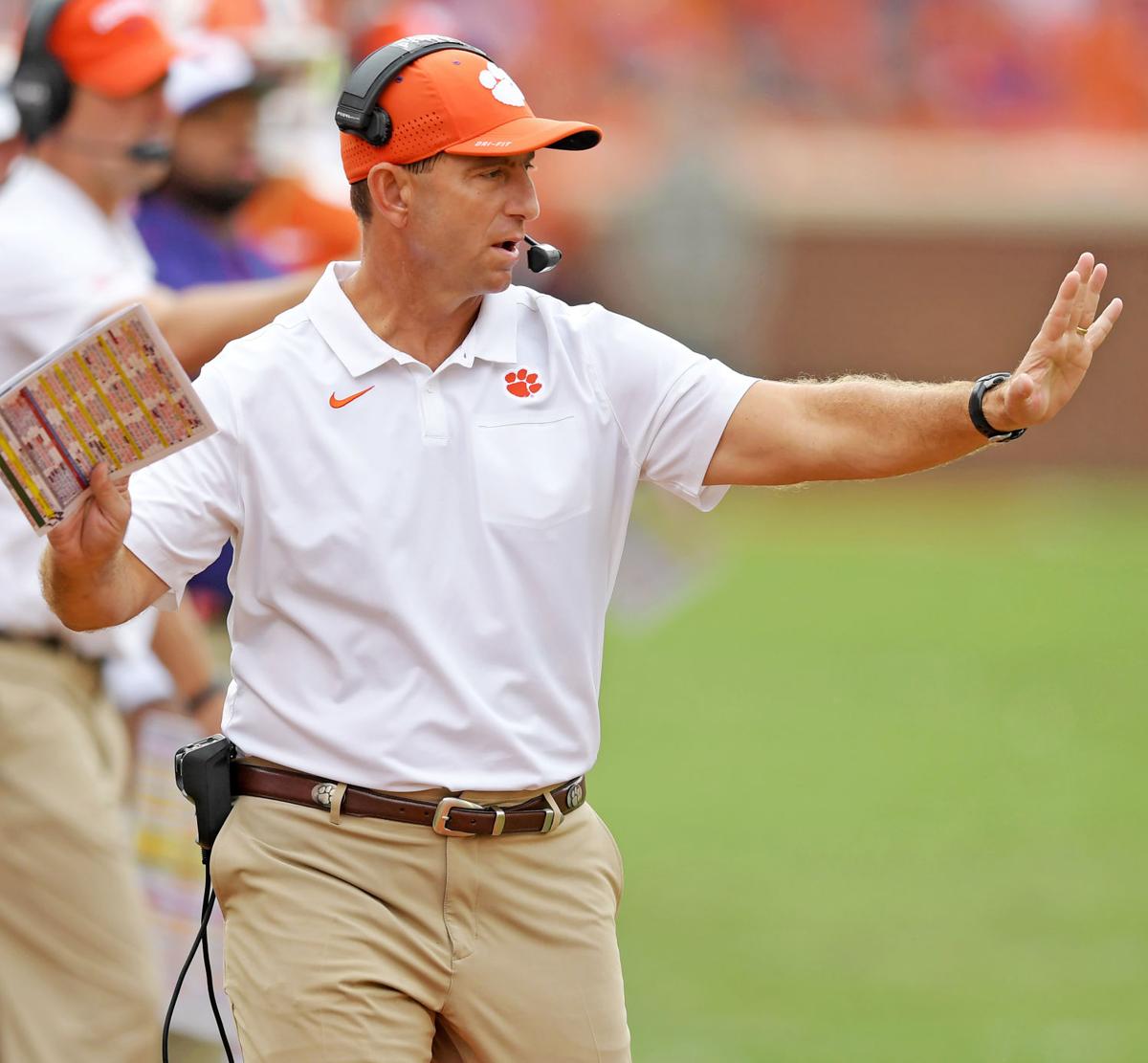 Dabo Swinney said that part of coaching is "knowing "when to love 'em and knowing when to chew 'em." Gwinn Davis / Special to The Post and Courier 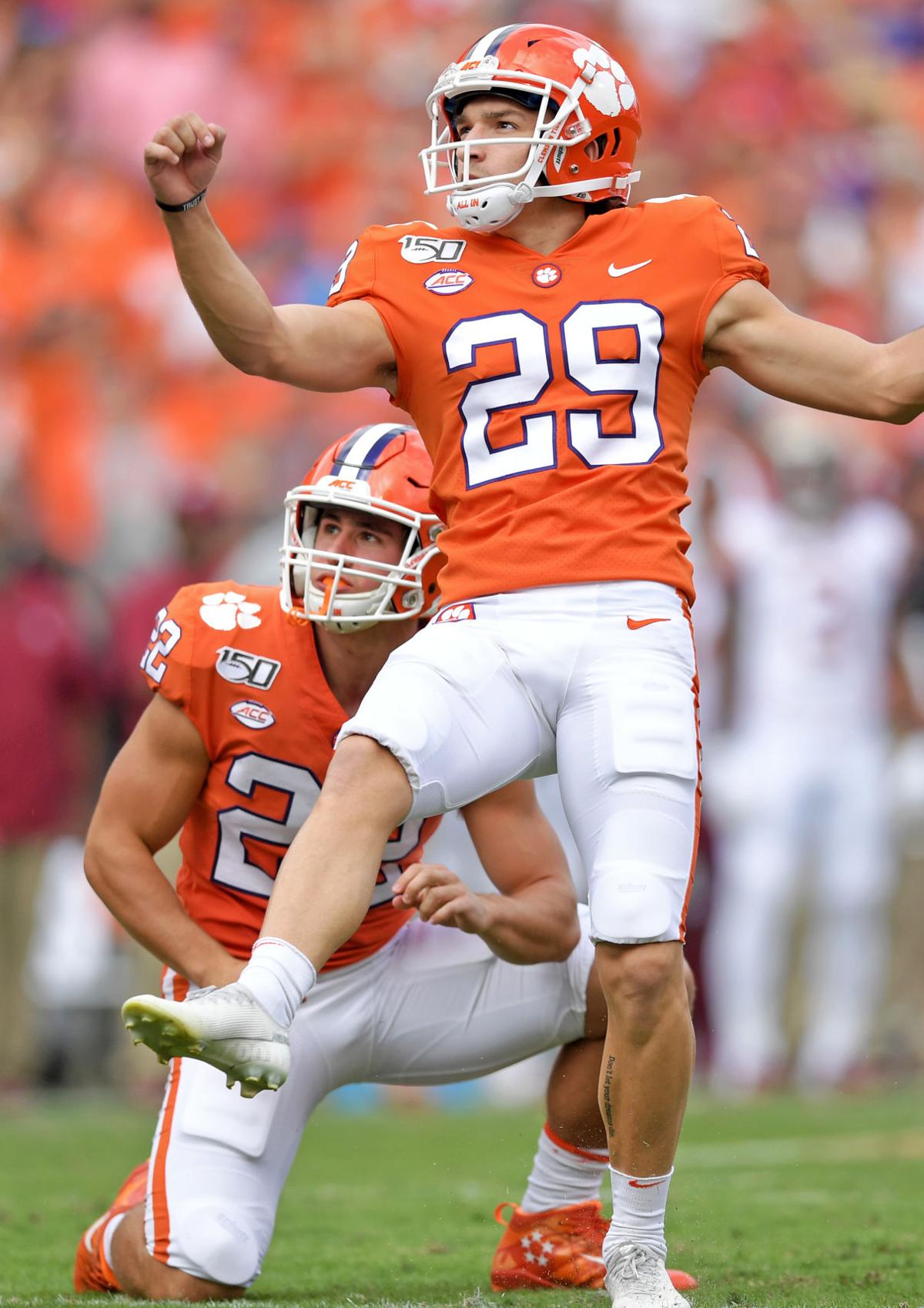 Dabo Swinney said that part of coaching is "knowing "when to love 'em and knowing when to chew 'em." Gwinn Davis / Special to The Post and Courier

CLEMSON —  Carol McIntosh and Ervil Swinney did not sentence their children to timeouts. No, their three sons were brought up on a different strain of discipline, as their youngest explained Tuesday.

"Sometimes you got to put your arm around them," Dabo Swinney said, in referencing how his upbringing influenced his coaching style. "Sometimes you need to really kick them in the butt."

All players at Clemson receive mentoring from both ends of the spectrum, Swinney said, and sometimes that means he needs to raise his voice. On Saturday, he ripped into kicker B.T. Potter after the sophomore missed a 24-yard field goal with the No. 3 Tigers holding a 28-point lead over Florida State.

Clemson's up 28-0 and Dabo Swinney ready to kill his kicker after a missed FG 😭😭😭😭pic.twitter.com/h0F7u3Grse

"Are you kidding me?" Swinney hollered as Potter trotted off the field, before following Potter as he walked down the sideline, still yelling. The outburst sparked conversation on social media, with some insisting that Swinney had gone too far, including former South Carolina kicker Elliott Fry.

"Really bold move to try and ruin your young kickers confidence in a cupcake game," Fry wrote in a tweet.

Linebacker James Skalski refuted the notion that Swinney's treatment of Potter was too harsh.

"People can just take that out of context a lot," Skalski said. "That's the game of football. That's what you sign up for. Nothing wrong with it."

Before Potter lined up for for the opening kickoff of the second half Saturday, Swinney approached him on the field, offering words of encouragement and tapping him on the helmet. Potter will still handle Clemson's kickoffs and long-yardage field goals, but not attempts from shorter distances.

"He's going to kick in the NFL," Swinney said. "He's probably the most talented kicker I've ever had, just pure talent and pure leg strength and all that stuff. But he's just got to grow up a little bit. Got to grow up and get the kind of mental toughness it takes to be special at that position."

Senior Steve Sawicki, a walk-on transfer from North Carolina A&T, will handle shorter kicks, and he converted a 26-yard attempt in the second half Saturday of the Tigers' 45-14 win. Sawicki transferred to Clemson primarily to focus on earning his civil engineering degree, but now he finds himself in a supporting role in one of the biggest storylines surrounding one of college football's most scrutinized programs.

Sawicki said Potter has been "fine" in practice this week in the wake of the outburst, noting that he has the sophomore's back.

"We're the only ones who know what we go through as kickers," Sawicki said.

Potter, a product of South Pointe High in Rock Hill, was the No. 3 kicker in the nation for the class of 2018, per 247Sports. Swinney gushed over his leg strength during fall camp, and Potter converted a 51-yard field goal in the team's opener against Georgia Tech. He's been inconsistent since, though, having converted just 3 of 5 field goal attempts between 20 and 39 yards.

Swinney believes Potter has the ability to win his starting job back, but first, he needs to work on the mental side of the game. It's not the first time Swinney has been harsh to a player:

Indeed, after Etienne struggled in the team's 21-20 win over North Carolina in Week 5, offensive tackle Jordan McFadden said Swinney spent the following two weeks "getting into," Etienne a little bit. The running back rushed for 67 yards and one touchdown on 14 carries against the Tar Heels, in addition to losing one fumble and struggling in pass protection.

"In meetings, maybe, talking about what we got to do to get better and be a better team, and be better players, he'd just kind of tell Travis that he's capable of playing better," McFadden said.

The day after the North Carolina game, McFadden sat in front of the television with offensive guard John Simpson and offensive tackle Tremayne Anchum, watching the Dallas Cowboys play the New Orleans Saints. They were listing reasons why they were happy to be at Clemson, and McFadden pointed to the team's culture. Coaches at Clemson genuinely love their players, McFadden said.

That affection manifests in different forms.

"This is a bunch of men," Swinney said. "It's competitive, and iron sharpens iron, right? If you ever watch iron sharpen iron, there are some sparks that fly."