Clemson on Monday released a list of nutritional and dietary supplements given to football players during the 2018 season. The school provided the information in response to a public records request from The Post and Courier.

According to the Clemson report, only five new products were made available during the season — all on Oct. 10, during the off week between the Wake Forest and N.C. State games. But over 50 supplements, including Rice Krispie treats and Cliff Bars, were introduced in January and March of 2018.

The Tigers in December had three players banned from the College Football Playoff games for testing positive for ostarine, a performance-enhancing drug. Head coach Dabo Swinney said it is possible the substance came from something Clemson gave the players by mistake.

Supplements routinely are made available to major college athletes, who are often directed to take certain amounts as part of strength or weight adjustment plans.

The Throne Zinc Picolinate is a zinc product; picolinic acid is a natural mineral compound produced in the body.

Clemson must officially confirm that any nutritional supplement given to athletes complies with NCAA rules, a Clemson spokesperson told The Post and Courier. 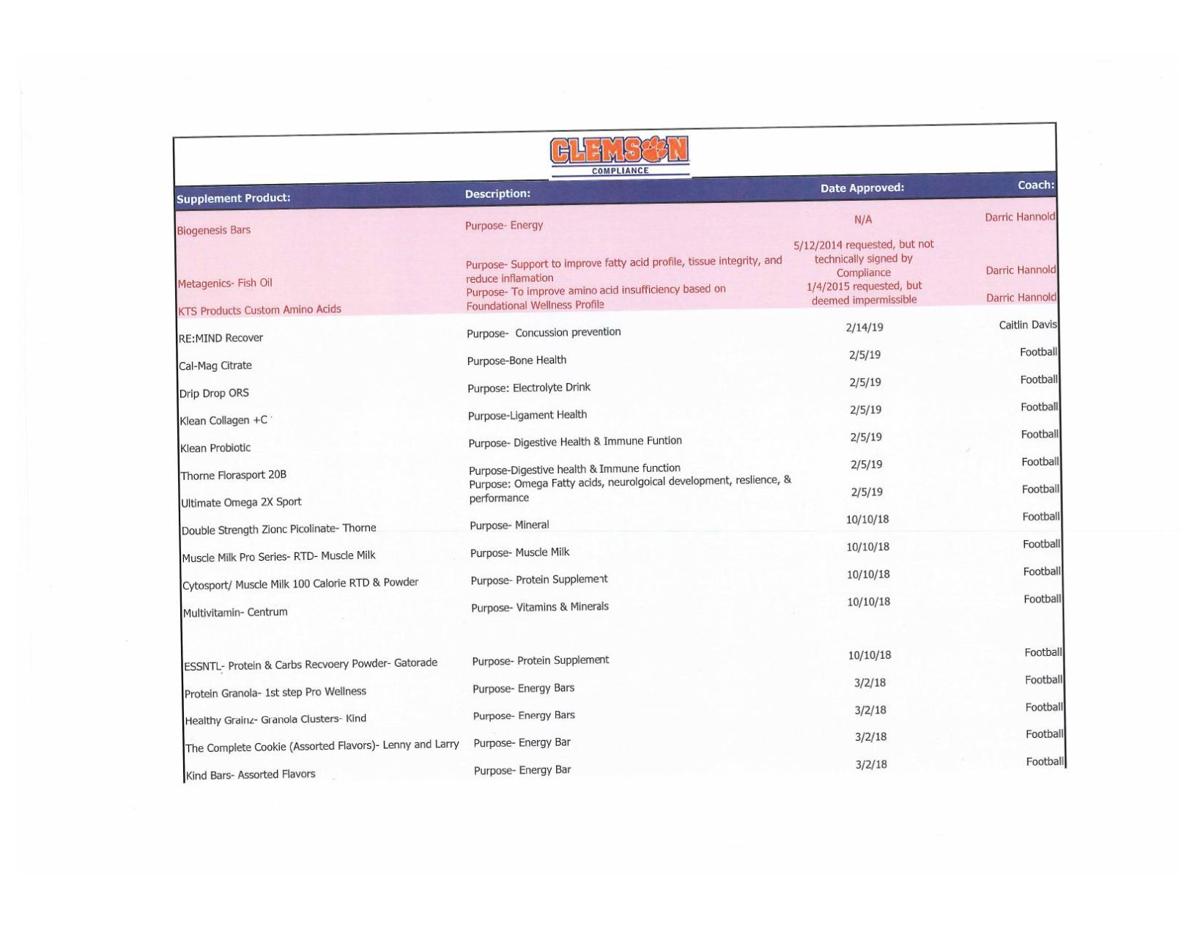 Star defensive tackle Dexter Lawrence and reserve players Braden Galloway and Zach Giella tested positive for ostarine before the Cotton Bowl and were banned from both that game and Clemson’s 44-16 victory over Alabama in the national championship game.

Lawrence was the 17th overall pick (New York Giants) in the NFL draft Thursday night. Galloway and Giella remain ineligible for the 2019 season pending a Clemson appeal, which the NCAA is expected to hear this week.

The NCAA, as part of routine championship event procedure, picked fewer than 20 Clemson players for random drug testing. There were 119 players on the roster.

Swinney told The Post and Courier in February that the ostarine could have been mistakenly given to the players by the school.

Lawrence has said he has no idea how the PED entered his system. The Wake Forest, N.C., native told The Post and Courier in February that he was ready to answer PED questions at the NFL Combine or on visits to NFL teams.

“I do want to know how it got in my system and where it came from,” Lawrence said. “But right now, they are still doing their research to see where exactly it came from, and they don’t know where right now.”

Within the list of over 100 supplements given to Clemson athletes from 2007 to February of 2019 are many familiar products, ranging from Power Bars and Kind Bars to Whey Powder.

The list includes two items apparently rejected for basketball team use: Metagenics Fish Oil in 2014 (“technically not signed by compliance”) and a Custom Amino Acid in 2015 (“deemed impermissible).

A Clemson in-house investigation into the PED situation was launched just after the positive tests and before the Cotton Bowl. The school has not provided any updates regarding the investigation.

Feb. 16: Star tackle Dexter Lawrence says he wants to know how PED got in his system