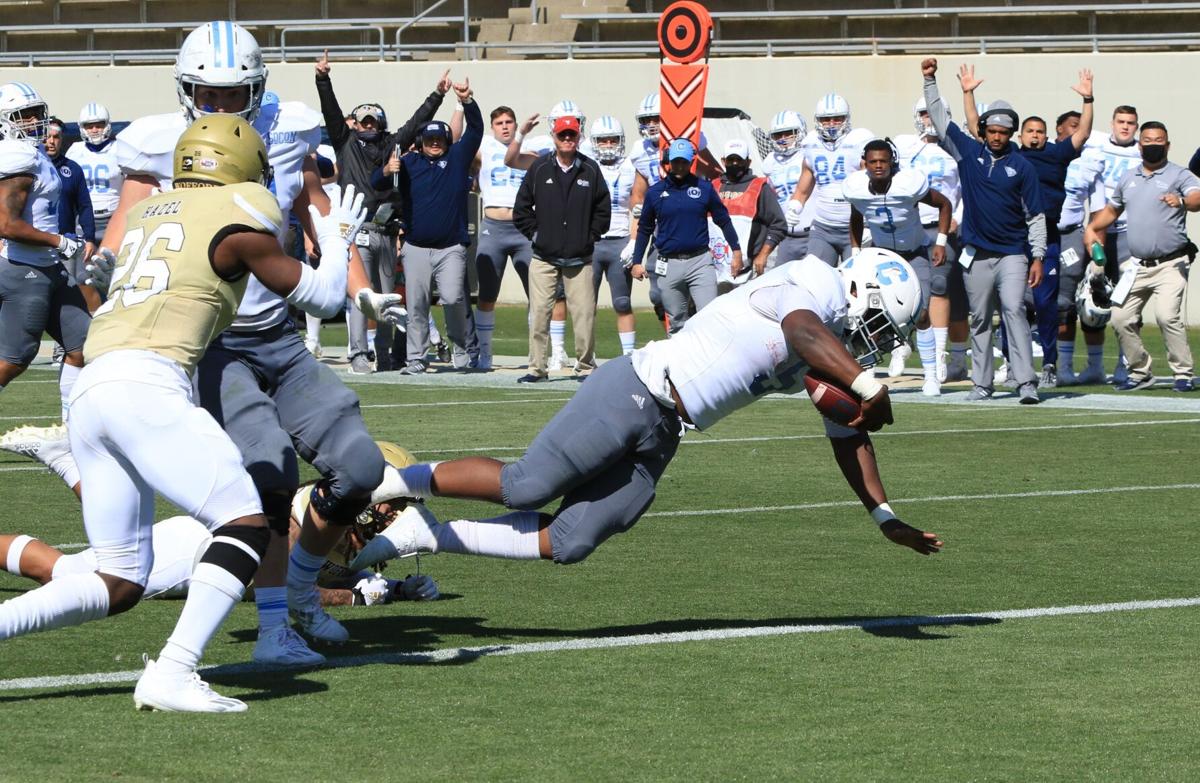 The Citadel's Clay Harris scores one of his two touchdowns in the Bulldogs' 28-24 win at Wofford on April 3. Citadel Athletics/Provided 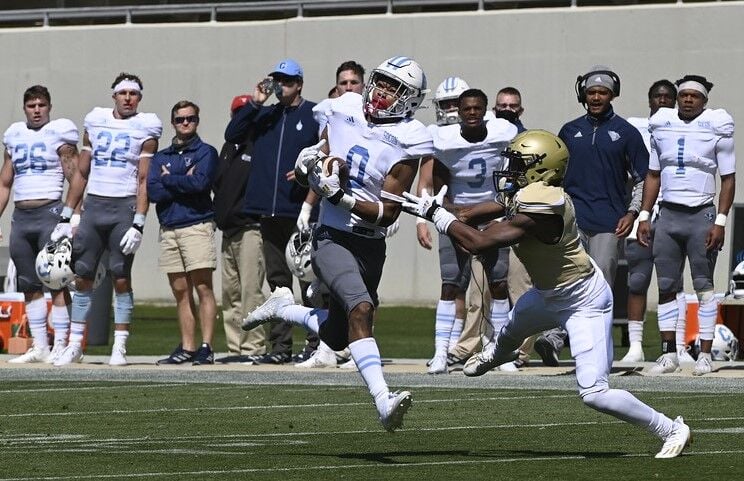 The Citadel's Javonte Middleton comes down with an interception at Wofford on April 3. Wofford Athletics/Provided

Brent Thompson charged into the locker room that sits atop a hill overlooking Wofford's Gibbs Stadium.

Citadel players picked up their diminutive coach and passed him joyfully around the room, their shouts and laughter echoing off the walls.

"There was a lot of emotion going on there, a lot of hugs were given and a little bit of crowd-surfing," Thompson said. "It's a feeling that had been lost on us for such a long time that we wanted to enjoy it."

Thompson's beleaguered team rallied from 17 points down in the third quarter for a 28-24 win at Wofford on April 3, snapping an 11-game losing streak and winning for the first time since Nov. 2, 2019.

An 0-4 record in the fall, an 0-5 start to the Southern Conference's spring season, COVID-19 opt-outs, bookstore suspensions — all of it was forgotten in that locker room, at least for a few minutes.

"This whole season, that's all we've been thinking about was just getting a win," said fullback Clay Harris, who ran for 113 yards and two touchdowns, including the winning score with just 26 seconds left. "That's all we've been talking about. I know it's been a lot of days, but that was our biggest thing this week, just coming up here to get a W."

Three of The Citadel's five losses this spring have been by one score or less. And it looked like fate might rule against the Bulldogs again on Saturday.

Down 24-14 in the third quarter, Citadel fullback Nathan Storch popped a 64-yard run all the way to the Terriers' 13-yard line — then lost a fumble at the end of the run.

"We think we're going in the right direction, and then we turn the ball over," Thompson said. "But we didn't hang our heads."

The Citadel defense forced a punt, and then Harris got loose for a 45-yard run of his own. Adams made it pay off with a 23-yard TD pass to Owens that got the Bulldogs to within 24-21 with 11:54 to play.

Defensive tackle Carson Hatchett then forced a Wofford fumble, recovered by Parrish Gordon at the Bulldogs' 35 with 5:21 left.

Just enough time for a clutch 10-play, 65-yard drive for the winning score, aided by a Wofford face mask penalty and three third-down conversions by the Bulldogs.

"Exactly what we needed," Thompson said. "We didn't have to get out of our comfort zone and get out of our offense. It was a drive we needed to put together, not just for the win, but for a little confidence in our offense. Clay ran extremely hard, and he really carried us to the victory."

The Citadel turned the ball over twice, but the Bulldogs' defense — led by 12 tackles from All-America linebacker Willie Eubanks III, back from injury — also forced two turnovers.

Cornerback Javonte Middleton's interception in the third quarter set up an eight-play, 58-yard drive that ended with Llewellyn's 5-yard TD to cut a 24-7 gap to 24-14.

Wofford (1-4) has faced many of the same roster issues as The Citadel this spring, and even had two players enter the NCAA transfer portal this week.

The Terriers got a 26-yard TD pass from starting QB Jimmy Weirick to Garrison Moore in the first quarter, but then Weirick sat the rest of the game in favor of backup Payton Derrick. He ran for a 1-yard TD and guided Wofford to a 24-7 lead in the third quarter when Cross High School product Nathan Walker ran for a 16-yard score.

But Wofford's next four drives ended with Middleton's interception, two punts and the final lost fumble.

"We've played some tight games this spring, but things just haven't gone our way," Thompson said. "Finally, something went our way a little bit. We got a turnover and a game-ending drive. Psychologically, it's going to be huge for our guys."

• LB Anthony Britton, also out for last week's 55-7 loss to Samford, also had 12 tackles ... In addition to his TD, slotback Sam Llwellyn also caught a 31-yard TD pass ... The Bulldogs played without lineman Jon Barrett Lewis, slotback Nkem Njoku and defensive back Caleb Deveaux, each serving one-game suspensions ... The Citadel is at home April 10 against Furman for its final home game of the spring.