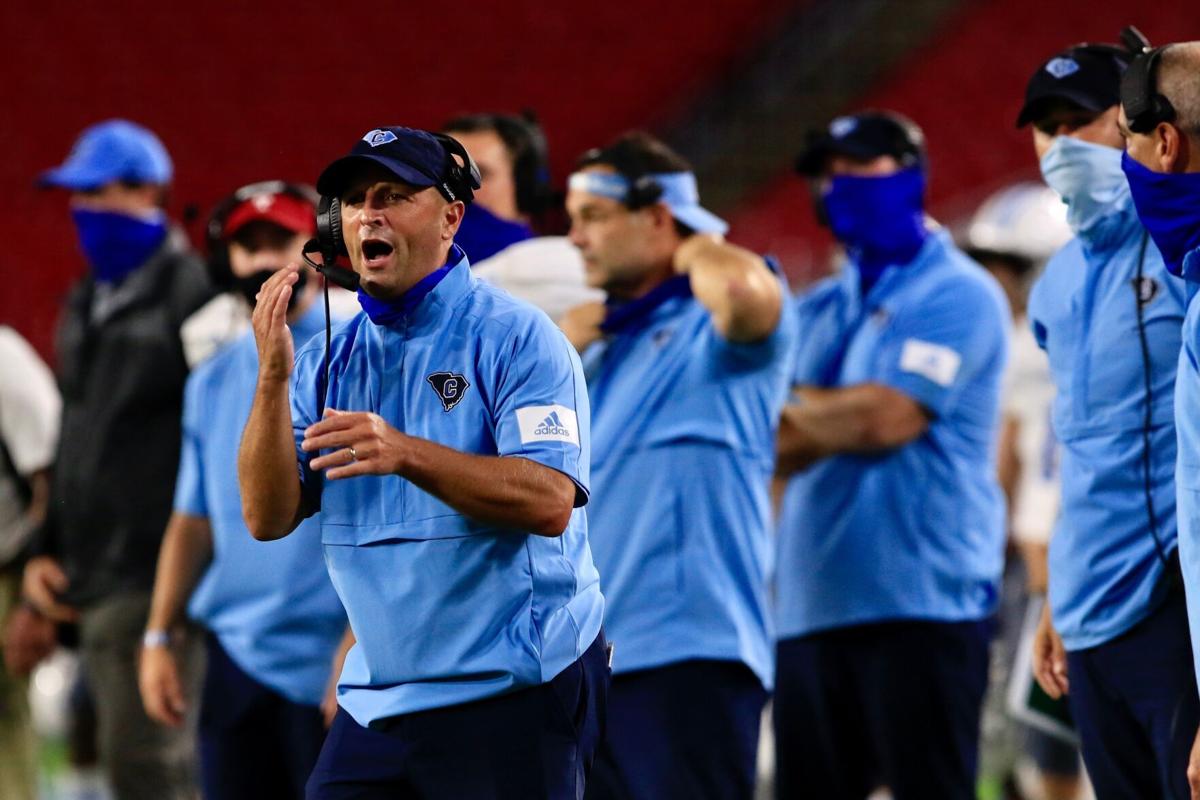 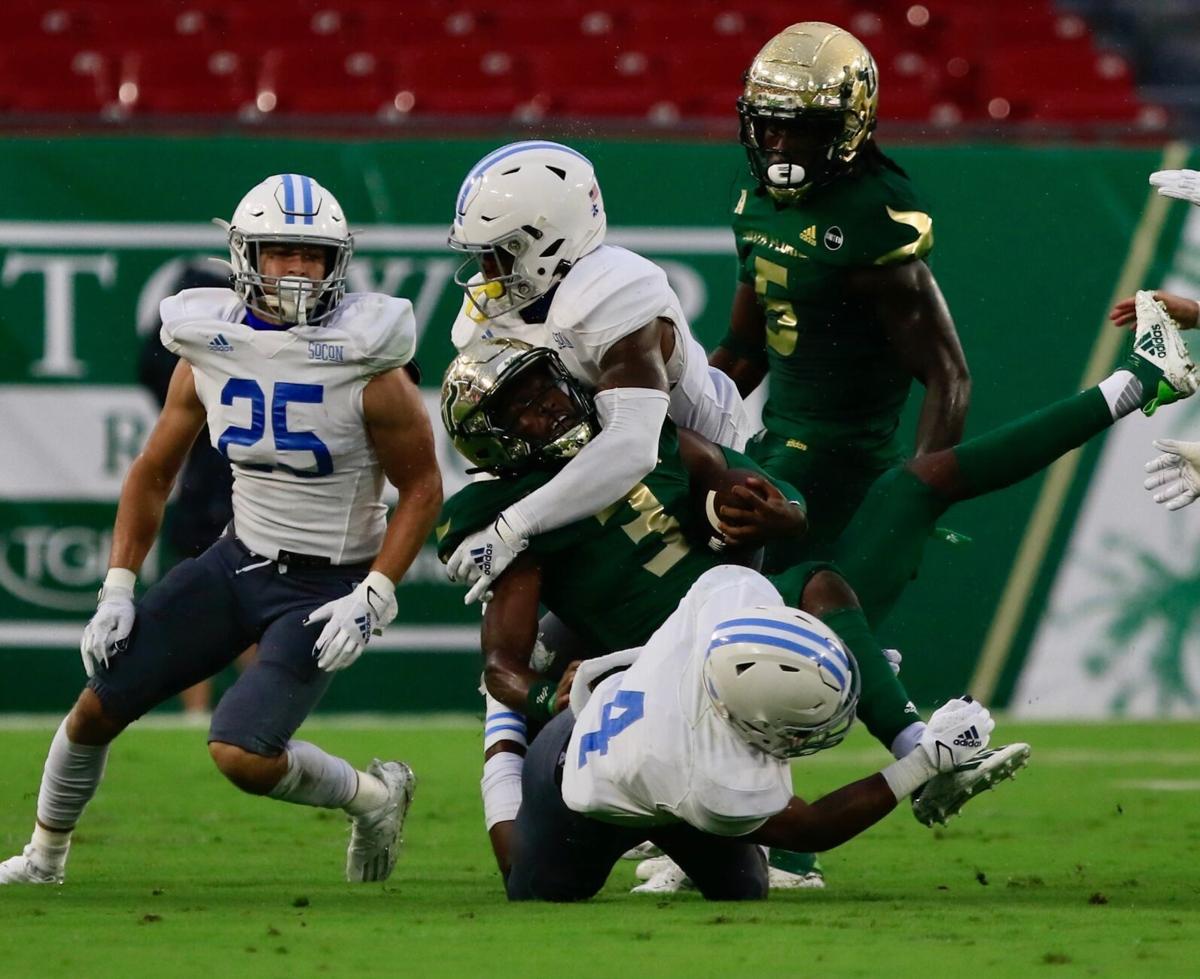 All the trappings of the No. 1 team in college football were there.

And that's not to mention legendary coach Nick Saban, Heisman Trophy candidate Tua Tagovailoa and the 10-0 Crimson Tide on the Alabama sideline at Bryant-Denny Stadium.

And yet The Citadel Bulldogs, FCS fodder from a tiny military school, managed to escape with their dignity intact, playing Alabama to a 10-10 halftime tie before settling for an inevitable 50-17 defeat.

But the Tigers will be running down the hill for the first time this season, and among them will be Heisman Trophy candidates in quarterback Trevor Lawrence and running back Travis Etienne.

Clemson is the lone remaining game of the original 11 on The Citadel's 2020 schedule, and is worth a $450,000 guarantee to the Bulldogs.

"Clemson is as advertised," Thompson said during his Monday news conference. "And we are going to do our best to compete on their level for as long as we possibly can. We'll do everything we can to make it a game for them."

The Clemson game will mark the third time The Citadel has faced the No. 1 FBS team in the country since Thompson came to The Citadel in 2014.

The Bulldogs lost by 37-12 at No. 1 Florida State and QB Jameis Winston in 2014 when Thompson was the Bulldogs' offensive coordinator. Thompson was in his second season as head coach when The Citadel played at No. 1 Alabama in 2018.

Even in that Florida State game, The Citadel was able to gain 21 first downs and 271 rushing yards, running 70 plays and converting 11 of 17 on third down.

But The Citadel's recent games against Clemson have not been as competitive. The Bulldogs lost by 61-3 at Death Valley in 2017, the year after Thompson's Citadel team won the Southern Conference title in his debut season as head coach, and by 52-6 in 2013.

"The last time we played at Clemson, I thought we were a little bit in awe," Thompson said. "We have a lot of guys from that area, and you get out there and watch them run down the hill ... It took us a little while to settle into the game."

It's (almost) inevitable that Clemson's superior size, speed and depth will take its toll on the Bulldogs. How long they can hang in against the Tigers might depend on how well The Citadel can duplicate the first-half formula that worked at Alabama.

The Bulldogs were able to keep the ball away from Tua and the Alabama offense, holding the ball for 19:14 of the first 30 minutes. The first quarter was halfway over before Alabama touched the ball after The Citadel ran off seven minutes and eight seconds with a 12-play, 35-yard drive.

And when The Citadel was on defense, the Bulldogs were able to force a punt, a fumble and a field goal in the first half. Alabama scored one touchdown on just four first-half possessions.

"A lot of things went our way in the first half," Thompson said. "And the No. 1 thing was, we approached it as a team as to how we were going to shrink the game and try to make them kick the ball. Our defense did a good job of getting some early stops against a very powerful team. On offense, we were able to play keep-away as much as we could. We played extremely hard and we had guys who stepped up all over the place.

"If we can do that, we can hang in there for as long as we possibly can."

The Bulldogs tried to put that formula to work in last week's 27-6 loss at South Florida, but an excess of mistakes fouled up the equation.

Just as they did against Alabama, The Citadel got the ball first and actually picked up two first downs and 36 yards. But on first down at the USF 45, fullback Logan Braucht — a converted linebacker making his first college carry at fullback — lost a fumble.

Still, the Bulldogs were within 7-6 on the strength of two field goals by freshman Colby Kintner before a punting snafu gifted USF a touchdown and a 13-6 lead midway through the second quarter.

"We would have like to make it a little more competitive," Thompson said. "I thought our defense played pretty well. We gave up 214 yards on just eight plays, but other than that we played extremely well. But we didn't get any turnovers or create any short fields, and we didn't do enough to put the ball in the end zone."

The Citadel's helmets have decals with the initials "RG" and "FCA" to honor the late Ra'Shaud Graham, the Bulldogs' team chaplain and campus minister for the Fellowship of Christian Athletes. Graham, a 2016 Citadel graduate, died last spring in a drowning accident at the age of 26.

"That was important to me, to get that on the helmet for Ra'Shaud," Thompson said.

Some Citadel fans wondered why there was no traditional "block C" on the Bulldogs' helmets at USF, especially for a nationally televised game. The white helmets sported just a double blue stripe down the middle.

"There are a lot of reasons why," Thompson said. "You've got to change out 120 single decals every week, and you are not getting a game time until Sunday and throwing together a travel itinerary. Some of it has to do with expense; maybe I want to spend $3,000 or $4,000 elsewhere in my budget, and I might not want to work my overworked equipment staff any more. I really just want to focus on important things, like what is under the helmet, not what's on the helmet."

• Slotback Keyonte Sessions, who was inactive for the South Florida game, could return this week. Graduate transfer lineman Summie Carlay from South Carolina played mostly on special teams against USF.

• According to the participation chart, 42 Bulldogs played against South Florida, which is about normal for a road game. Sixty players made the trip ... Two true freshmen, defensive back Dominick Poole and kicker Colby Kintner, played in the game ... Even with a punt of minus-10 yards, All-America punter Matt Campbell averaged 31.7 yards on six kicks, including a long of 46. He averaged 40 yards on his other five kicks, putting three inside the 20-yard line.

THE CITADEL AT CLEMSON