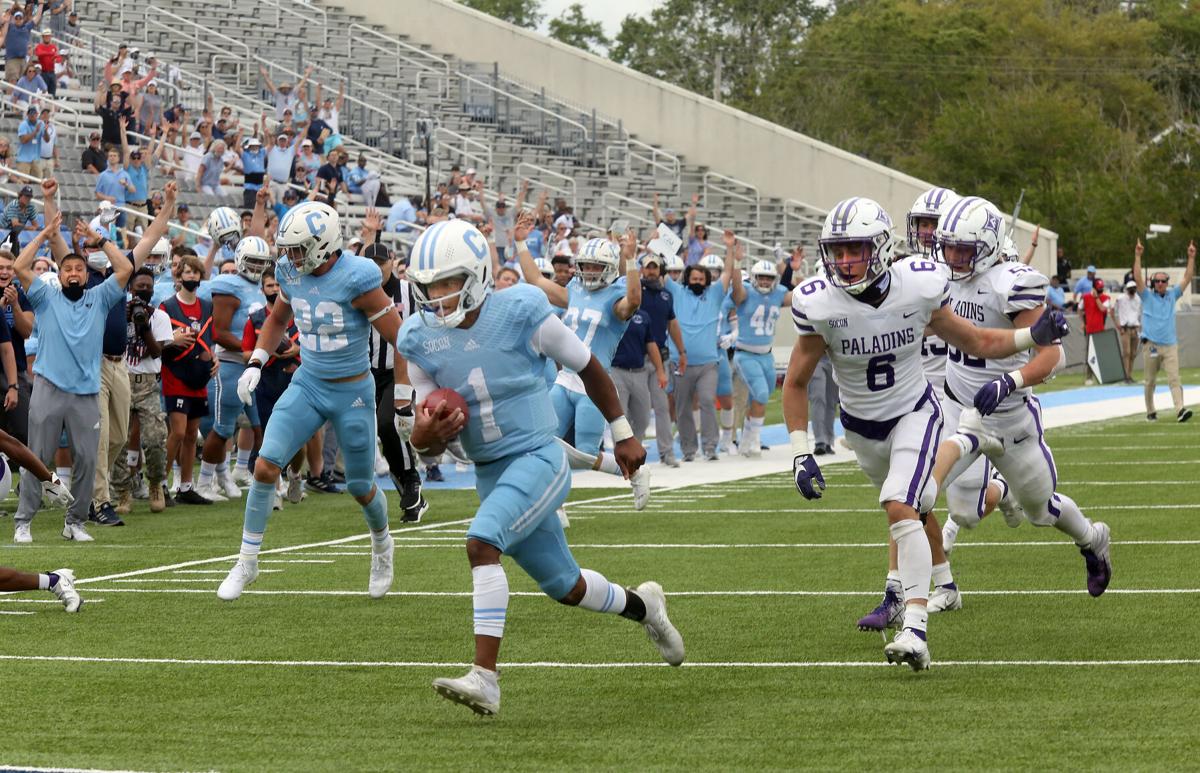 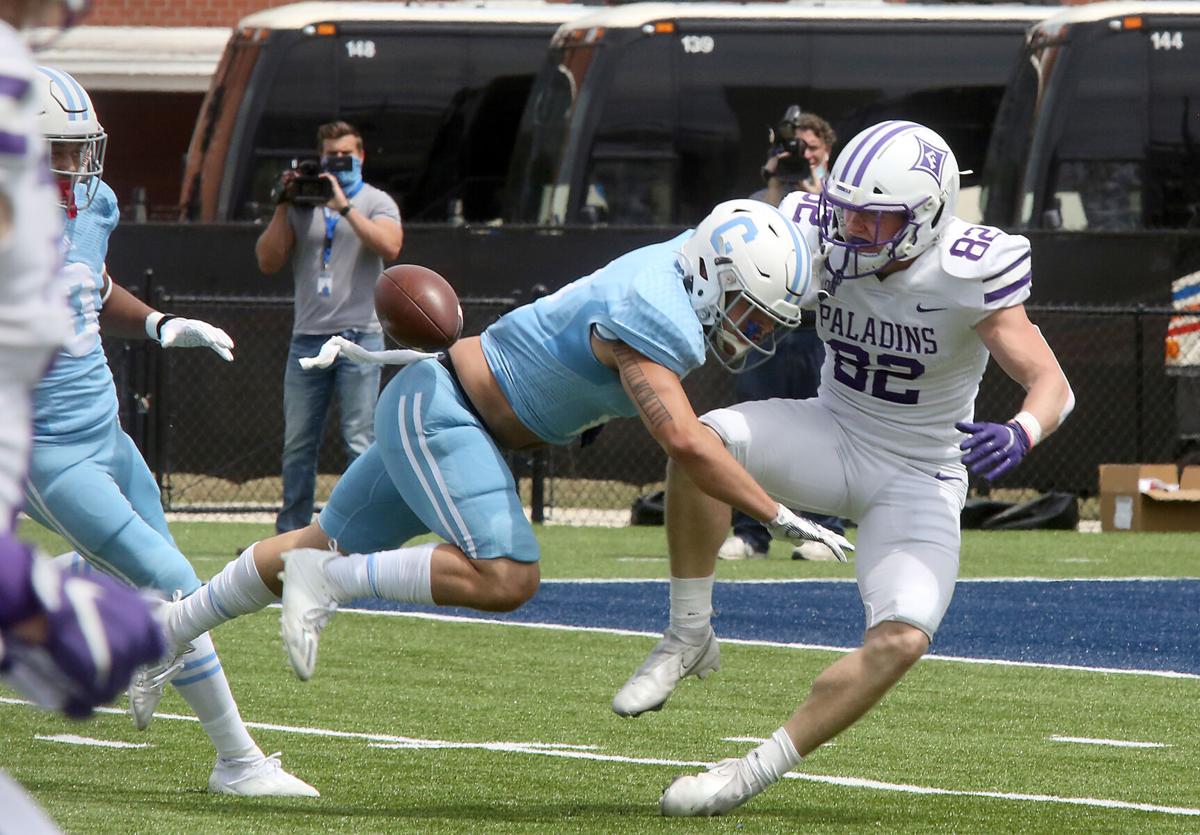 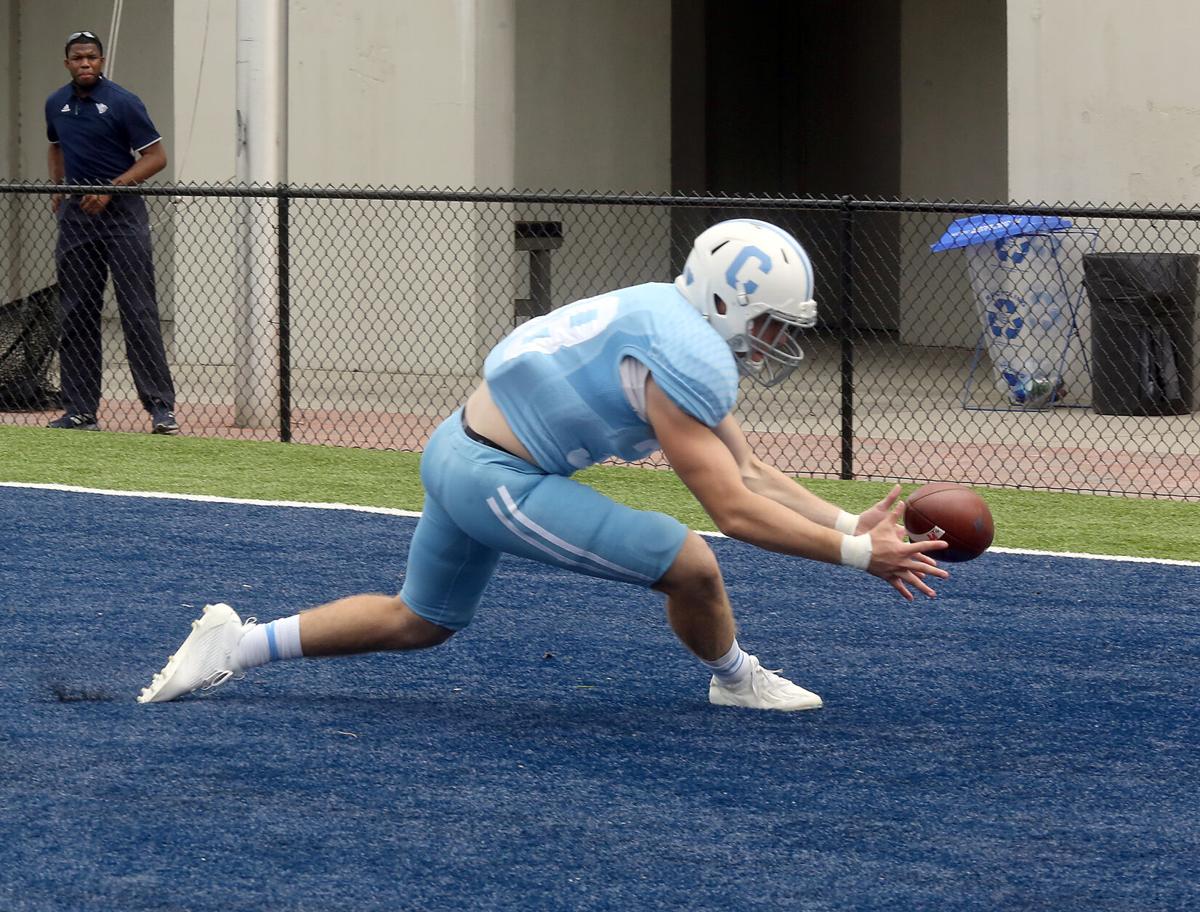 The Citadel's Logan Billings (38) scoops up the football against Furman for a touchdown after a blocked punt on April 10, 2021. Brad Nettles/Staff 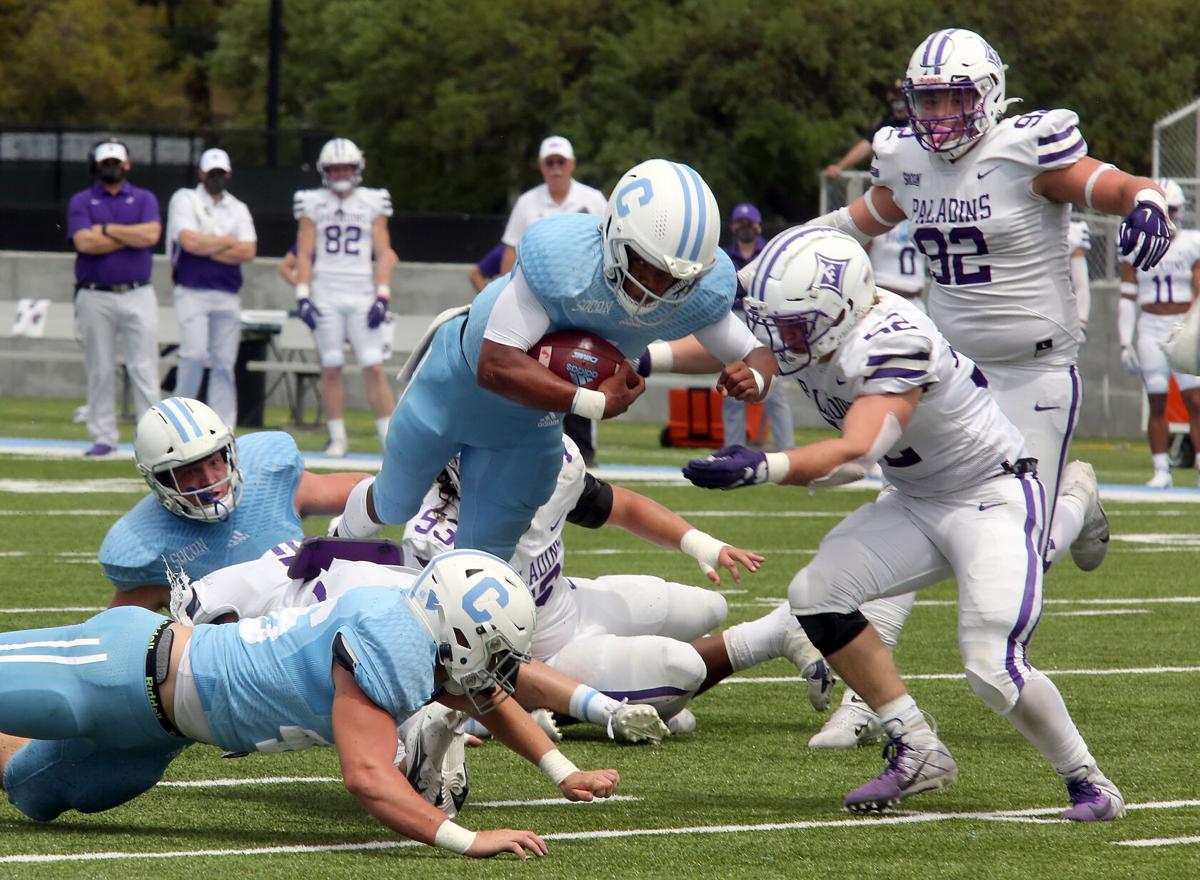 The Citadel's Logan Billings (38) scoops up the football against Furman for a touchdown after a blocked punt on April 10, 2021. Brad Nettles/Staff

In the 100th edition of The Citadel vs. Furman football, the Bulldogs played a game those old leather-helmets from 1913 would recognize.

The Citadel ran the ball 70 times, using a three yards and a cloud of rubber pellets offense to bludgeon Furman into submission 26-7 at Johnson Hagood Stadium on April 10.

Quarterback Jaylan Adams ran for touchdowns of 25 and 43 yards as the Bulldogs beat their rivals for the fifth time in seven games and won for the second week in a row after an 0-9 start to the unprecedented 2020-21 season.

The Citadel is 2-5 in the Southern Conference this spring and will try to regain possession of the coveted Silver Shako on April 17 at military school rival VMI. The Bulldogs could finish out the season with consecutive wins over rivals Wofford, Furman and VMI; they have not beaten all three since the 10-2 SoCon title season of 2016.

For the Bulldogs, the silence emanating from the Furman (3-4) locker room was golden.

"After a loss, you can blaringly clearly hear the celebration going on next door from the other team," Thompson said. "We've all got to stop what we are doing until their celebration is over. I told the guys, it feels good to be on this end of it."

The Bulldogs scored on offense, defense and special teams, averaging just 3.9 yards per play but still hogging the ball for almost 40 minutes and converting 7 of 17 third downs and 2 of 4 on fourth down.

"We probably threw it back there a little bit," said Thompson. "But what dictated the run was the wind. It was very tough. We took the wind in the fourth quarter, because I thought the game would be close and the wind was going to be a huge factor."

The Citadel's defense was a huge factor, as well. The Bulldogs picked off two passes, one of them returned 31 yards for a big-man touchdown by West Ashley High School's Jay Smith to seal the game.

With All-America linebacker Willie Eubanks III held out of the game due to injury, linebacker Anthony Britton had 13 tackles and pressured Furman QB Hamp Sisson on the Jay Smith interception. Bradley Peery, a 6-5, 300-pound tackle filling in for All-SoCon tackle Dalton Owens, had six stops and two tackles for loss.

The Citadel held Furman to 129 yards rushing, and 49 of those came on a long run by Goose Creek product Jeff McElveen in the final minute. Sisson was just 6 of 22 for 124 yards and a TD, with two interceptions and a sack.

"Anthony Britton has picked up the slack for us quite a bit," Thompson said. "We had one game where he wasn't in there (against Western Carolina), and it showed it. He's probably the smartest player out there and gets everybody lined up."

After a goal-line stand in which the Bulldogs' defense held Furman out of the end zone on four plays from its own 3-yard line (and two from its own 1), Adams popped loose for the 43-yard TD that made it 19-7 with 5:16 left.

Cornerback Wilson Hendricks III backed up the TD with an interception with 4:32 left. And then Smith sealed it, picking off a pass knocked skyward by Britton. The 6-1, 270-pound junior rumbled 31 yards for a TD and a 26-7 lead with just 1:42 to play.

After a 20-play drive took 9:49 off the clock, the Bulldogs came up with empty with a missed field goal. But the defense forced a punt, and linebacker Kyler Estes barged in and was credited with a blocked punt (the ball also bounced off the back of a Furman lineman's helmet).

Freshman linebacker Hayden Johnson recovered the ball in the end zone for a touchdown and a 7-0 lead with just 47 seconds left in the first quarter.

On the kickoff, the wind blew the ball off the tee a couple of times. Destin Mack had to hold the ball for kicker Colby Kintner, whose kickoff wound up short.

It bounced a couple of times, and defensive back Ryland Ayers recovered the live ball at the Furman 26. Two plays later, Adams scored from 25 yards out. The extra point missed, leaving the Bulldogs with a 13-0 lead as the first quarter ended.

Furman answered with a 28-yard TD pass to Ryan Miller, with a couple of Citadel defensive backs whiffing as Miller spun into the end zone to make it 13-7 with 10:57 left in the half.

The Citadel ran the ball 70 times against Furman to win, 26-7, at Johnson Hagood Stadium Saturday, April 10.