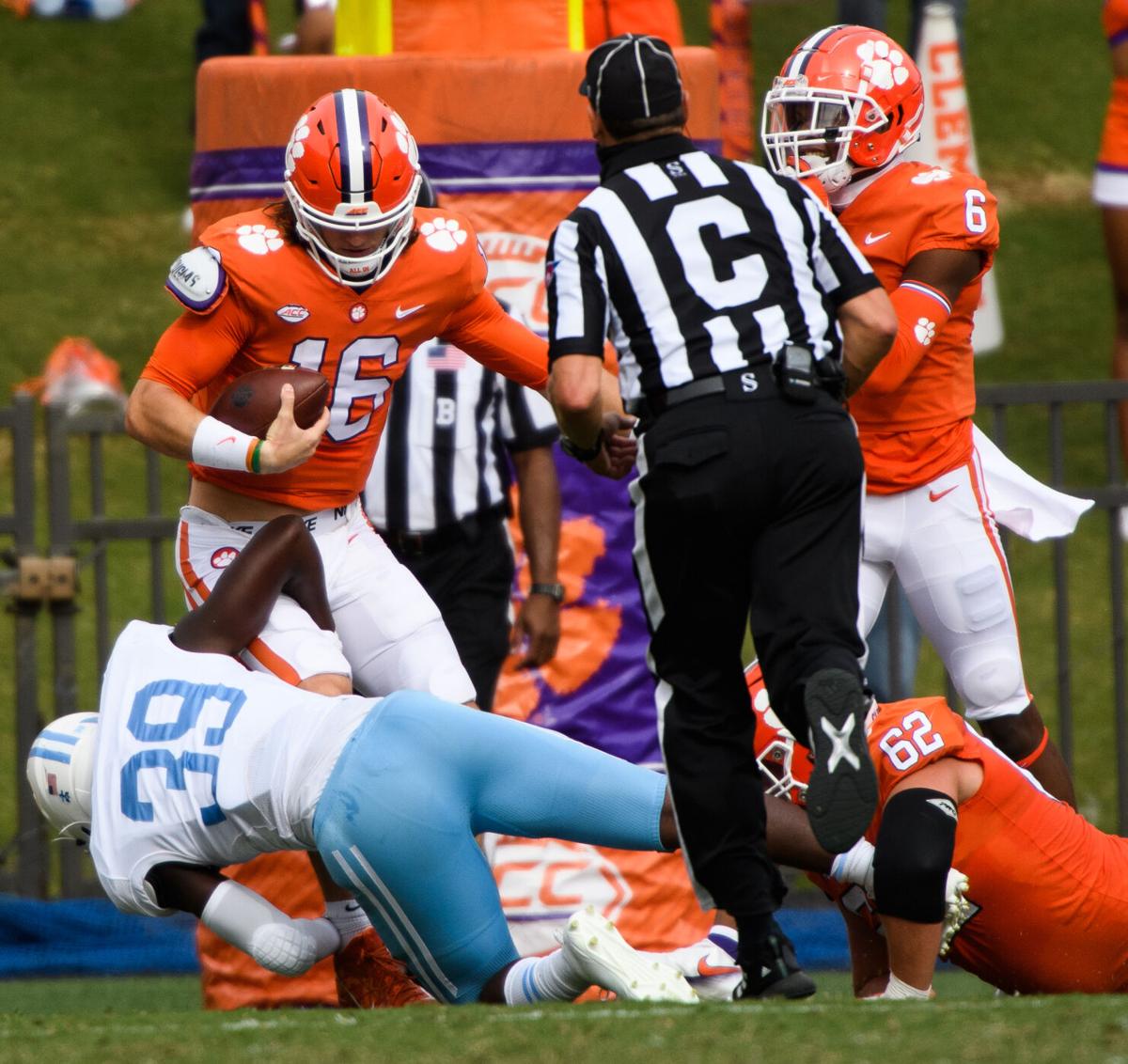 Clemson quarterback Trevor Lawrence(16) runs to score a touchdown as The Citadel linebacker Anthony Britton Jr.(39) attempts to stop him during the first quarter of their game against The Citadel Saturday, Sept. 19, 2020. 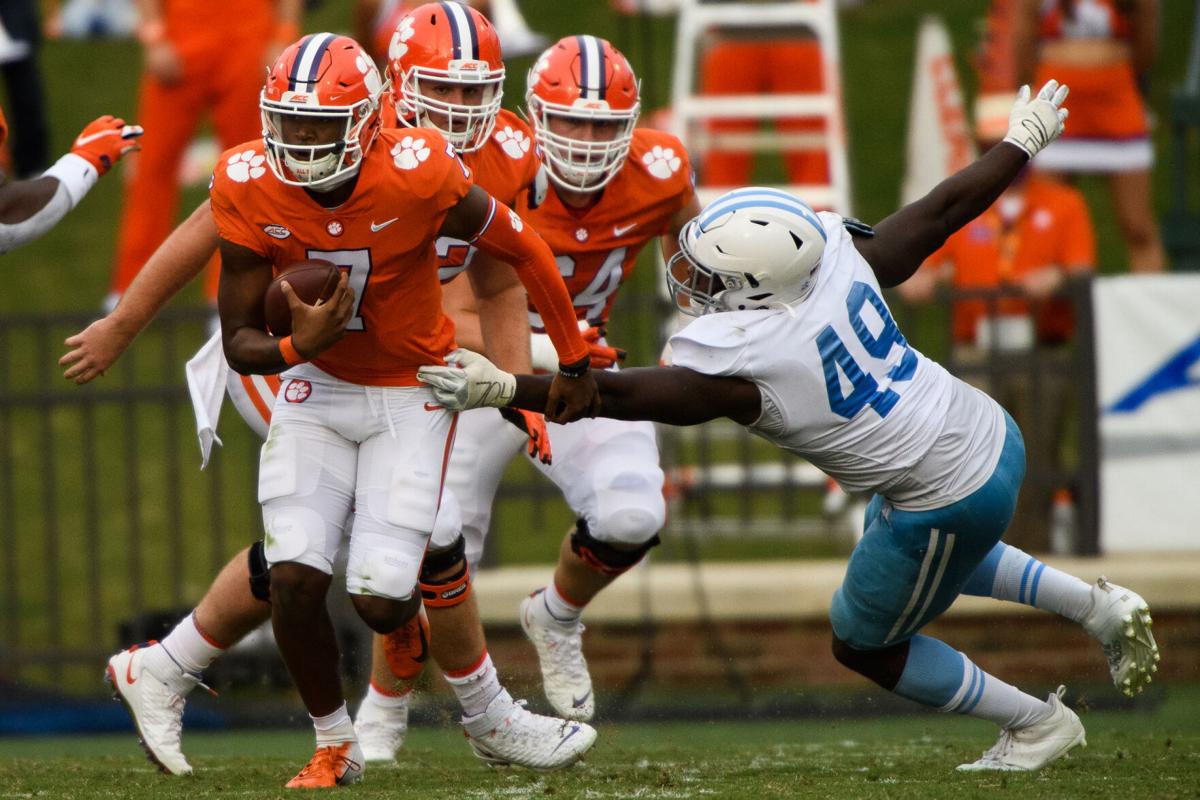 Clemson quarterback Taisun Phommachanh (7) runs the ball past The Citadel linebacker Marquise Blount (49) during the third quarter of their game Saturday, Sept. 19, 2020.

Clemson quarterback Trevor Lawrence(16) runs to score a touchdown as The Citadel linebacker Anthony Britton Jr.(39) attempts to stop him during the first quarter of their game against The Citadel Saturday, Sept. 19, 2020.

Clemson quarterback Taisun Phommachanh (7) runs the ball past The Citadel linebacker Marquise Blount (49) during the third quarter of their game Saturday, Sept. 19, 2020.

With The Citadel trailing No. 1 Clemson by 49-0 at halftime, game officials came to Bulldogs coach Brent Thompson with an offer.

They could shorten the second half, lessening some of the pain from a blowout loss. Clemson coach Dabo Swinney had already agreed, according to the ACC Network.

But Thompson was having none of it.

The Bulldogs played Clemson's reserves to a scoreless tie in the second half, but were no match for star quarterback Trevor Lawrence, running back Travis Etienne and the rest of the Tigers' talented starters in the first half as Clemson rolled to a 49-0 victory at Memorial Stadium.

"We absolutely could have played better (early in the game)," Thompson said. "The first drive or two, I thought we played okay ... But once we punted a couple of times and started to get behind the sticks, it kind of got away from us. And they obviously can figure things out pretty quickly. We had some special-teams issues that set us back, but I thought our defense played about as well as it could play against a very talented team."

Bright spots for The Citadel:

• Backup quarterback Jaylan Adams, who switched over from defensive back last spring, got his first game action. The 5-10, 165-pound redshirt sophomore ran 12 times for 52 yards, with a long of 17, against Clemson's reserves in the second half.

"What you can see out of Jaylan is that if a play does break down, he has the ability to extend it and make some guys miss. He needs all that game experience to polish up a few things and get his eyes in the right spot. But I think there's a spot for him there in the rotation."

• Receiver Raleigh Webb caught a 22-yard pass and threw a 38-yard pass on a reverse to Ryan McCarthy. That play set up a 47-yard field goal attempt by freshman Colby Kintner, but he missed. He's 2 of 4 on the season.

• All-America punter Matt Campbell, who went viral with a special-teams folly at South Florida last week, rebounded to punt 10 times for a 41.8-yard average, with a long of 51 yards.

Punter Matt Campbell's misadventure at South Florida caught the eye of ESPN commentator and former NFL punter Pat McAfee. He made Campbell the subject of his "For the Brand Therapy" segment on ESPN's College GameDay on Saturday.

In a 27-6 loss at USF, Campbell mishandled a snap and then almost whiffed on a hurried punt.

The football went straight into the arms of a South Florida player, resulting in a -10 yard punt, a 0-yard return for a touchdown and an embarrassing moment for the junior from Dacula, Georgia.

The Citadel punter Matt Campbell went viral last week after his botched punt.So @PatMcAfeeShow called up a few of his friends to give Campbell some "For the Brand Therapy." pic.twitter.com/MGP95HXZ8Z

McAfee interviewed Campbell and brought along some other NFL kickers to share their own embarrassing moments.

"You're actually even more of a part of our fraternity now," McAfee told Campbell.

McAfee recalled how he missed two field goals during his college days at West Virginia and "received 27 death threats."

"No matter how long you play, everybody goes through something like this," said New Orleans Saints punter Thomas Morstead. "The guys who persevere, they don't let it define them."

• Citadel fullbacks Clay Harris and Logan Braucht were not available against Clemson, along with starting cornerback Jay Howard. None of the three were out because of COVID-19. Braucht, a converted linebacker, started at fullback against South Florida. Harris was injured against USF.

• Citadel tackle Summie Carlay, a graduate transfer from South Carolina, wore No. 87 and played tight end against Clemson. He had a blocking below the waist penalty in the first half ... Grad transfer running back Alex Ramsey, an FCS All-American from VMI, has entered the transfer portal for a second time. He opted out of the 2020 fall season for The Citadel … Defensive back Torian Spencer, who also opted out this season, will transfer to Division II Morehouse College, he said on Twitter.

• West Ashley High School product Jay Smith provided one of the few reasons for Citadel fans to cheer. The 6-1, 270-pound redshirt sophomore stopped 6-4, 250-pound Clemson QB D.J. Uiagalelei on a fourth-and-2 in the third quarter, one of the Bulldogs’ few defensive stops.