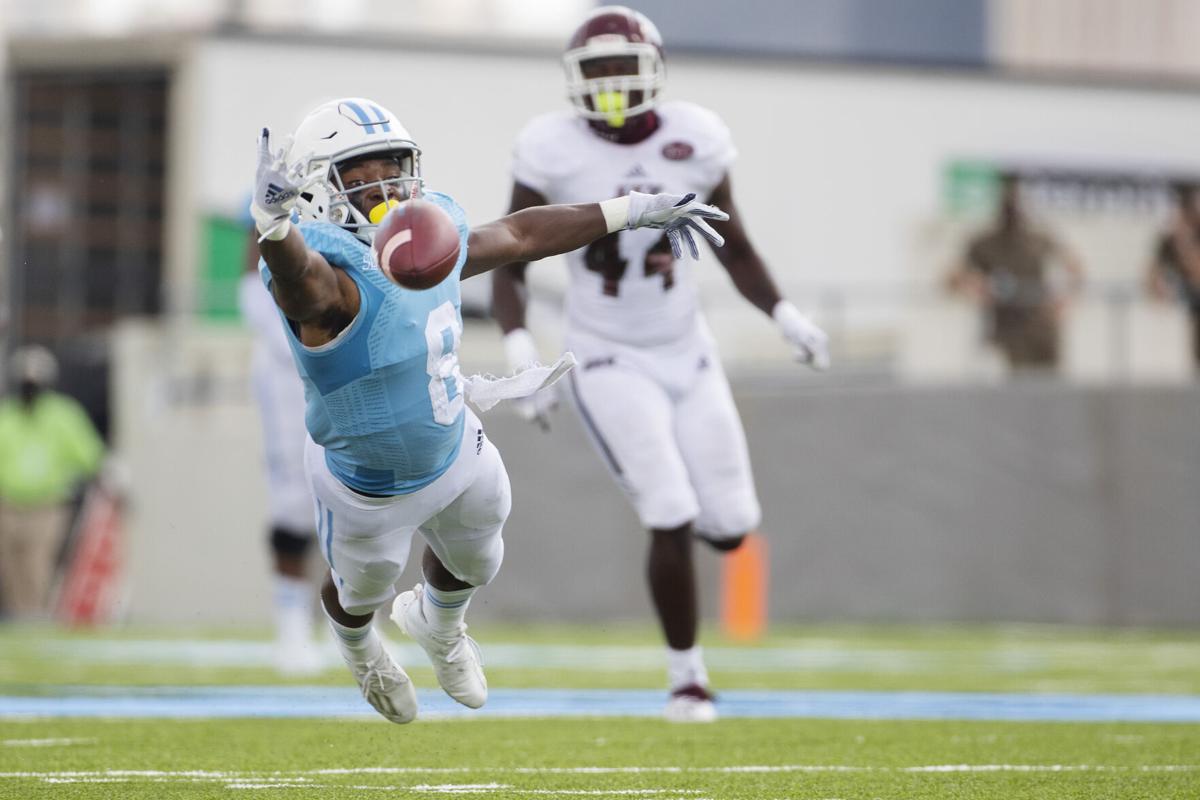 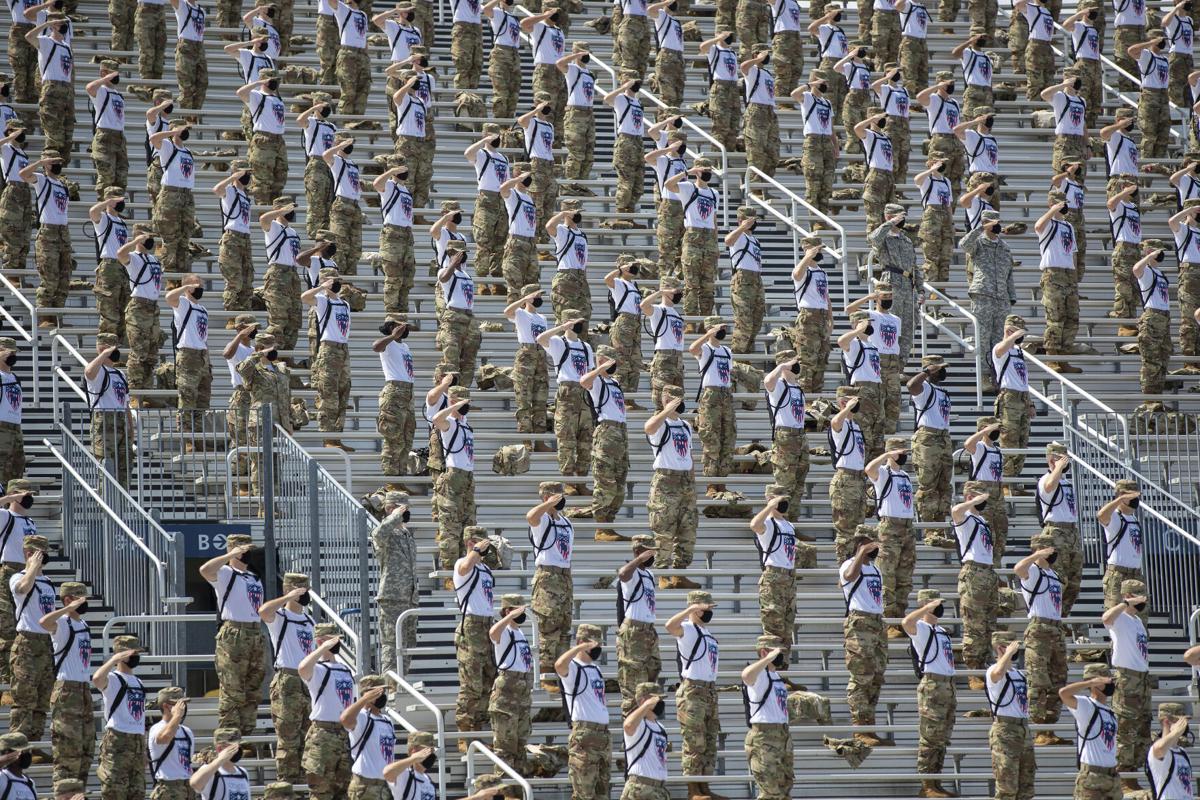 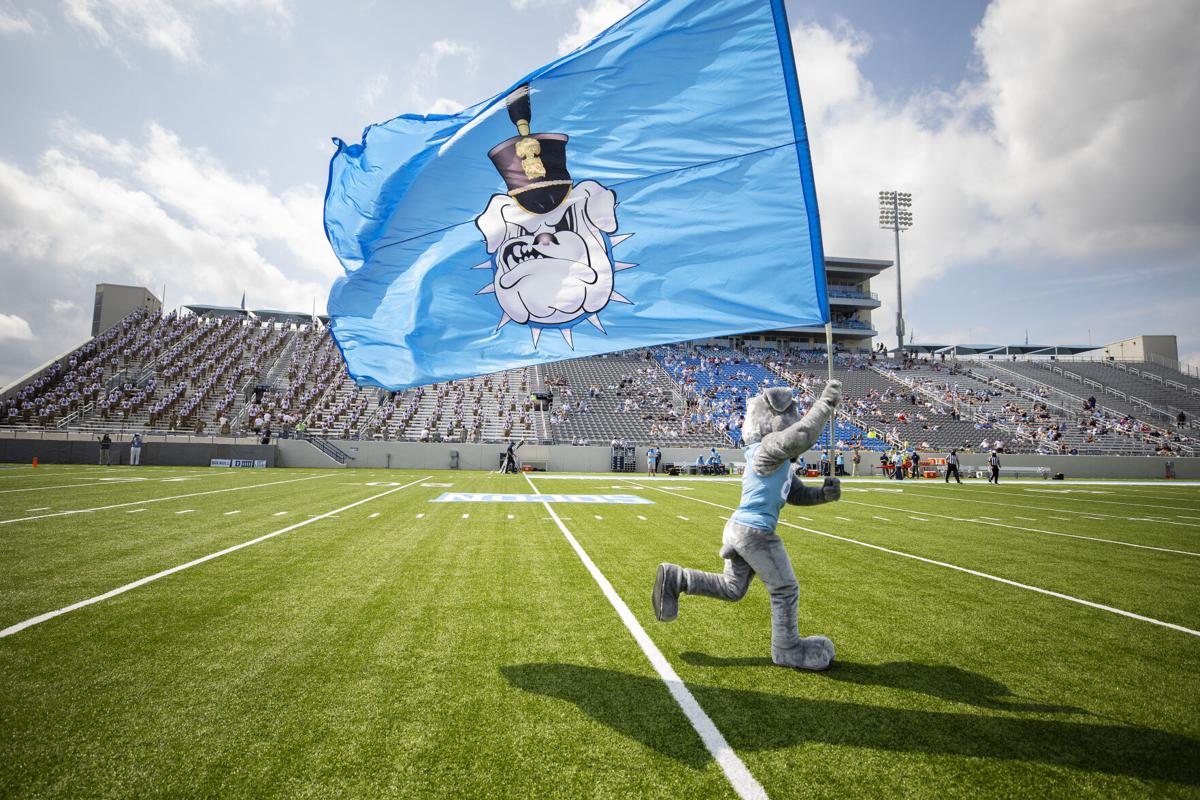 Spike T. Bulldog takes the field for The Citadel's only home game of the year against Eastern Kentucky University on Saturday, September 26, 2020. Lauren Petracca/Staff 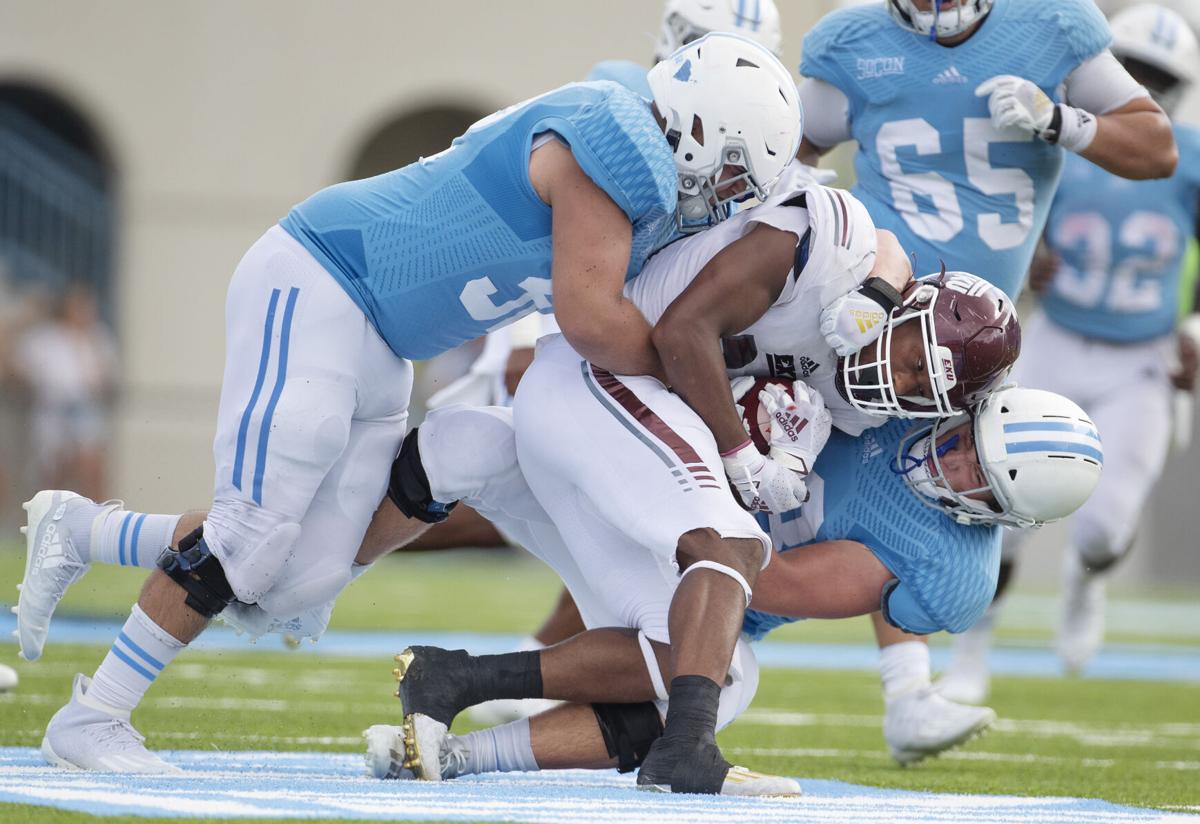 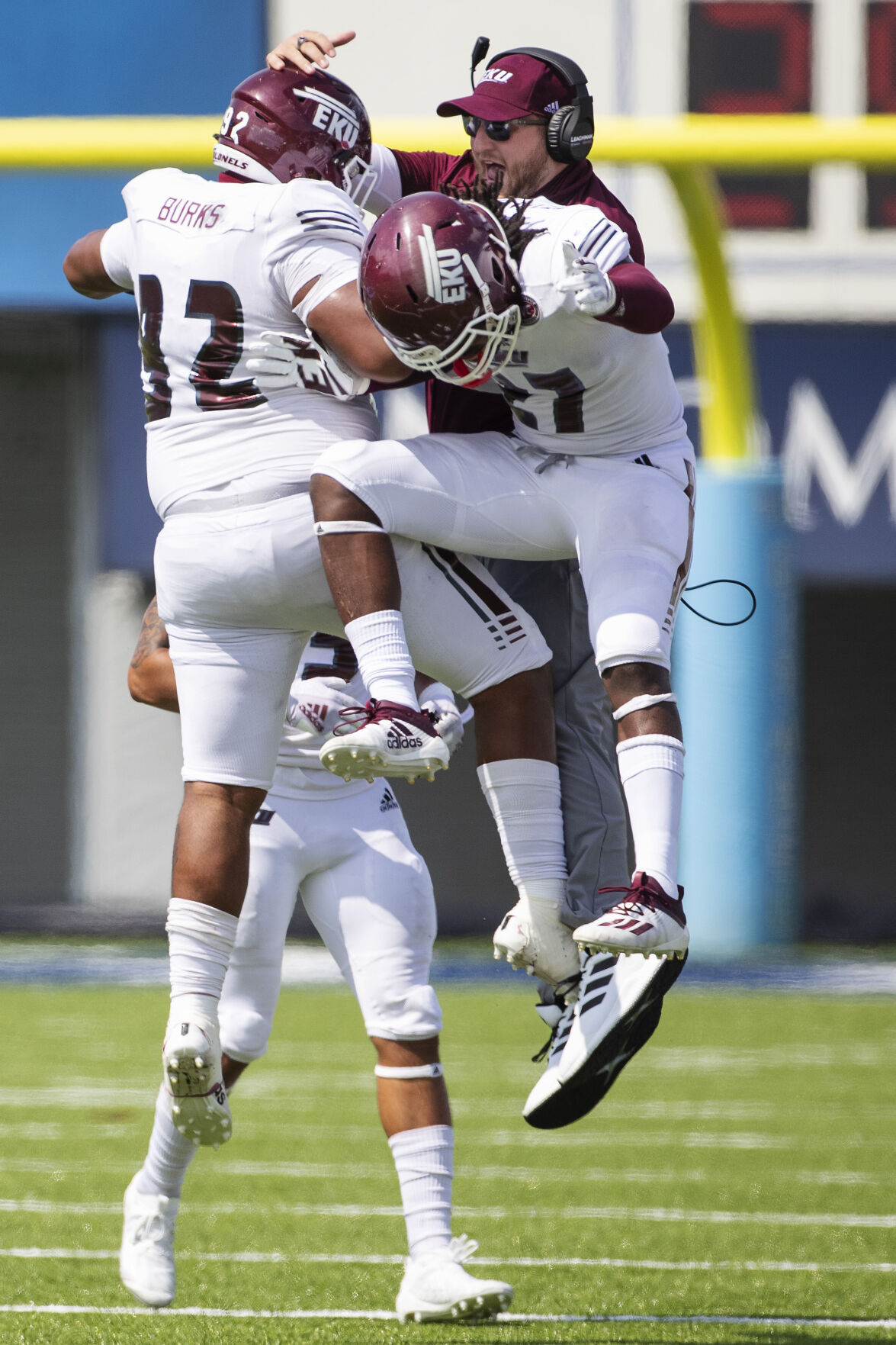 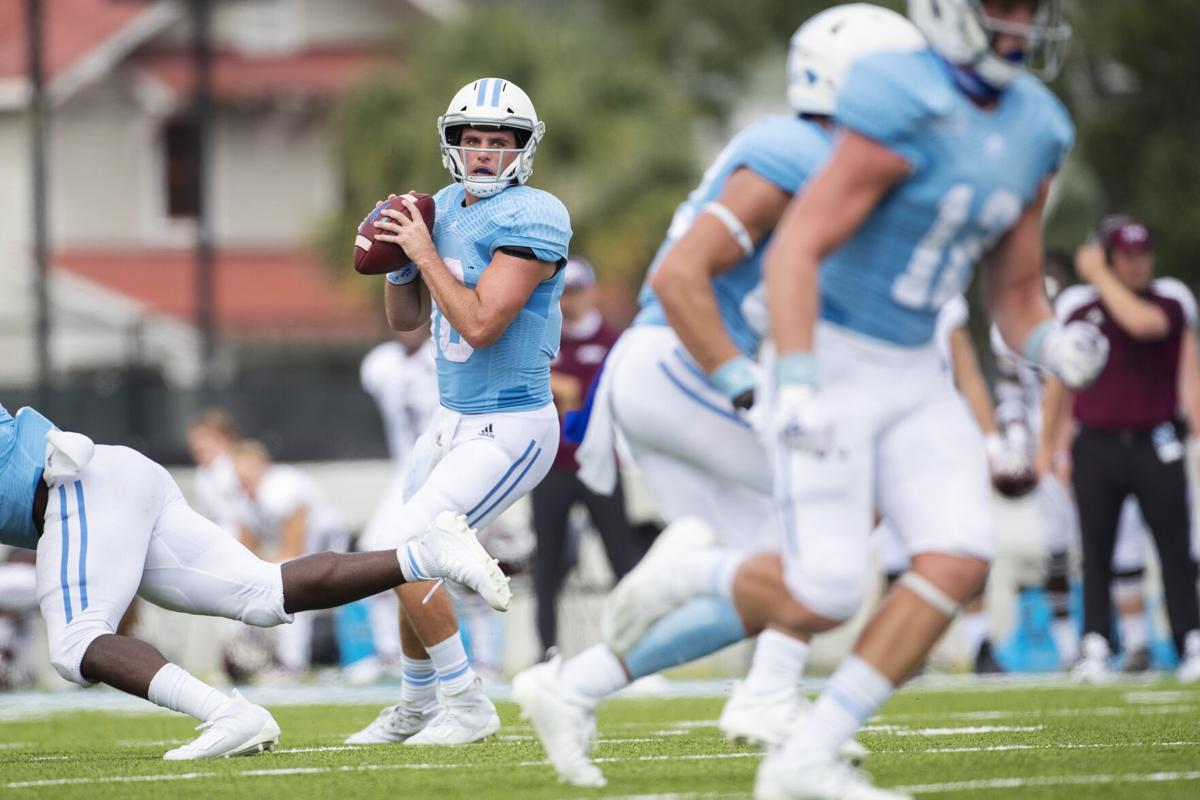 Spike T. Bulldog takes the field for The Citadel's only home game of the year against Eastern Kentucky University on Saturday, September 26, 2020. Lauren Petracca/Staff

The Citadel spent $100,000 to find an opponent for its only home game of the pandemic-shortened 2020 college football season.

But the Bulldogs could not make the investment pay off in victory.

Instead, Eastern Kentucky coach Walt Wells boarded a team bus Saturday afternoon wearing a snappy jacket and a baseball hat, with a victory cigar clinched between his teeth. He took home a 37-14 victory and a guarantee check for $100,000, thanks to quarterback Parker McKinney's four touchdown passes, three of them to Jacquez Jones.

The Citadel fell flat in its only chance to impress the home fans this fall, with six penalties, six fumbles (two lost), an interception, missed tackles and a missed field goal before the 3,081 spectators allowed into Johnson Hagood Stadium.

"It was obvious we didn't play very well out there," said Citadel coach Brent Thompson, whose club is 0-3 with only No. 22-ranked Army West Point left to play on Oct. 10. "It was our worst outing of the year. We didn't execute well, we had costly penalties again and we turned the ball over. On defense, we couldn't get off the field, had no turnovers and no short fields. Any recipe for us to win does not include any of those.

"Penalties are killing us right now," said Thompson, whose team has 24 penalties in three games. "I'm downright embarrassed. Eastern Kentucky is a good team, but they are not that much better than us. Our only chance to play at home, you'd like to be better than that."

With a spring Southern Conference football season uncertain at best, it might have been the final home game for several Citadel seniors, including quarterback Brandon Rainey and receiver Raleigh Webb. The Citadel is playing only four games this fall because the SoCon pushed its conference season to the spring.

"It crushes you," said Thompson, whose team lost its first two games at FBS squads South Florida and No. 1 Clemson. "It feels like, we've got an opponent at home, an FCS opponent you think you have a chance to beat. And to just be that poor, it's very disappointing."

The game was a bare-bones production due to COVID-19 restrictions. There was no crew to "fire the cannons" after Citadel scored, no cheerleaders and no Corps of Cadets marching in, though about 500 cadets were allowed to attend the game.

Eastern Kentucky (1-2), of the Ohio Valley Conference, also lost its first two games to FBS foes, Marshall and West Virginia. But the Colonels overwhelmed The Citadel's defense with the combination of the slippery McKinney, 250-pound running back Alonzo Booth, and a fleet of tall, athletic receivers.

McKinney hit 16 of 26 passes for 274 yards and four scores and was sacked twice. But when The Citadel did get pressure, he slipped containment to run for 89 yards on 13 carries, though 32 yards in losses cut his net to 57 yards. Booth had 18 carries for 91 yards and a TD.

All three of Jones' catches went for TDs, and 6-foot-3 Keyion Dixon caught five passes for 81 yards, including a 50-yard TD on a circus catch. Jackson Beerman, a 6-5 receiver, caught two jump-ball throws for 84 yards.

"That was my biggest fear when we watched them on tape," Thompson said. "The big running back, and then three or four receivers that are so tall and mobile, when you throw it up there they have a chance. We couldn't make enough plays on the ball."

The Citadel's option offense, held to two field goals in the first two games, functioned well at times. The Bulldogs ran for 347 yards on 67 attempts, including 114 yards on 22 carries from fullback Emeka Nwanze. Slotback Keefe White went for 89 yards, and Rainey had 70 yards and a TD on 22 tries. His 28-yard TD pass to Webb in the first quarter was The Citadel's first TD of the season.

A turning point came with EKU up 20-14 in the second quarter. The Citadel safety Chris Beverly forced McKinney on third and 10 from his own 26, and the QB appeared to lose a fumble, The Citadel recovering at about the EKU 30-yard line.

But the officials ruled the play an incomplete pass, allowing EKU to punt and costing the Bulldogs about 40 yards in field position. They went three and out on the next possession.

"It looked like a fumble," said Thompson, who protested vehemently on the sideline. "I didn't have the same vantage point as the white hat, but it shocked me to no end how bad that call looked to me. (The game) could have been better from an officiating standpoint."

Photos: Eastern Kentucky beats Citadel during only home game of the year

McKinney scrambled for 26 yards on third and 15, and on third and 27 threw a 56-yard jump ball to Beerman, who went over two Citadel defenders to catch it at the Bulldogs' 4. That set up a 21-yard field goal on the last play of the half for a 23-14 lead.

Jones used a spin move and a stiff arm to score on a 53-yard pass for a 30-14 lead early in the third quarter. Booth iced the game at 37-14 with a 4-yard TD after Daulston Fitzpatrick intercepted a Rainey pass and ran it back 31 yards to The Citadel 4.

• Citadel fullback Clay Harris did not dress with an injury ... QB Brandon Rainey went over the 2,000-yard mark in in career rushing. He now has 2,051 yards, ranking No. 16 in program history ... Raleigh Webb's TD catch was the 16th of his career, tying Brian Baima and Scooter Johnson for second all-time ... All-America linebacker Willie Eubanks III had a career-high 14 tackles, with two for loss and a sack ... LB Anthony Britton Jr. had 11 tackles, and LB Marquise Blount had a sack.