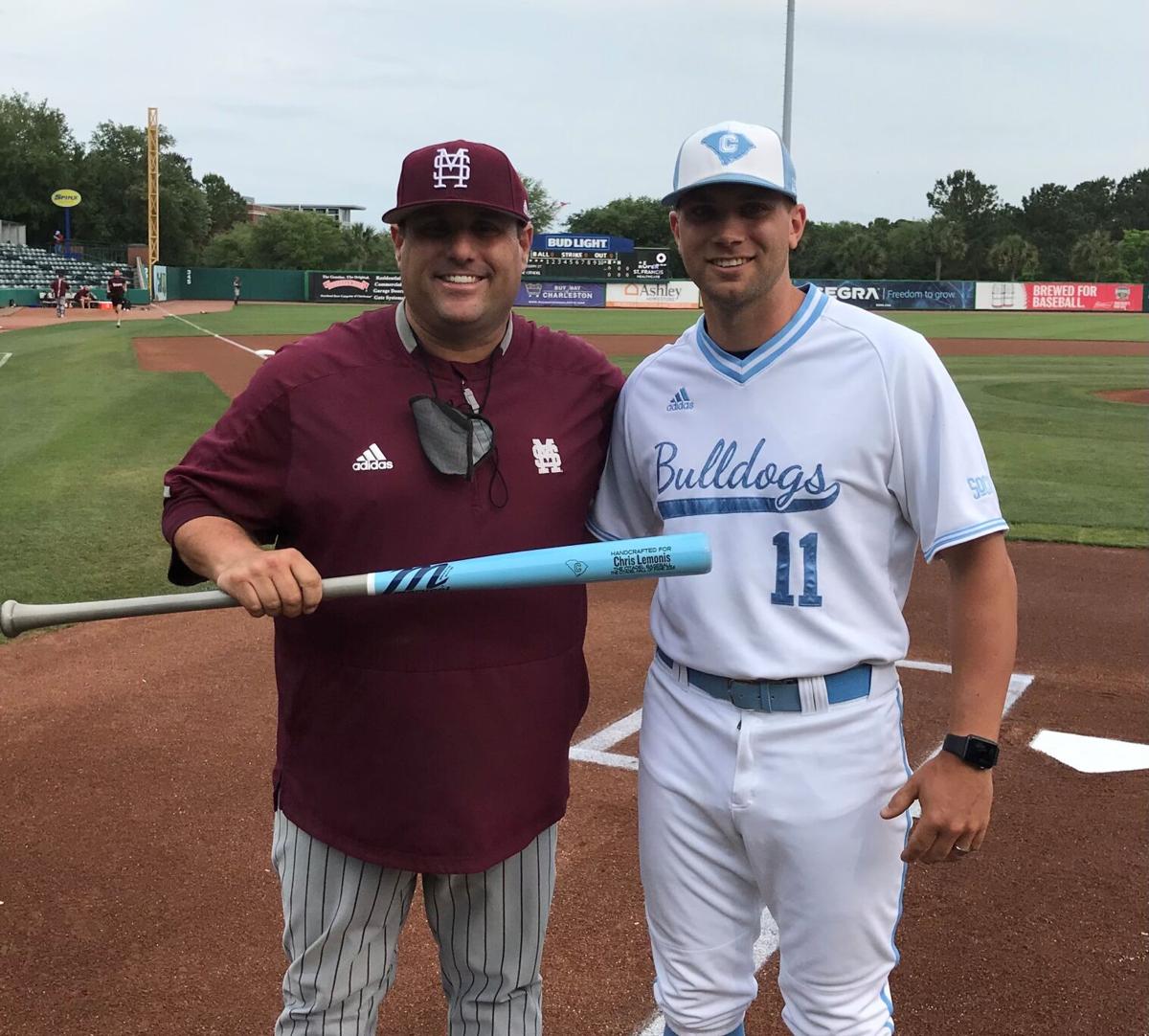 Mississippi State coach Chris Lemonis, a 1992 Citadel graduate, is presented a commemorative bat by Citadel assistant Zach Lucas before a game on May 5. Jeff Hartsell/Staff 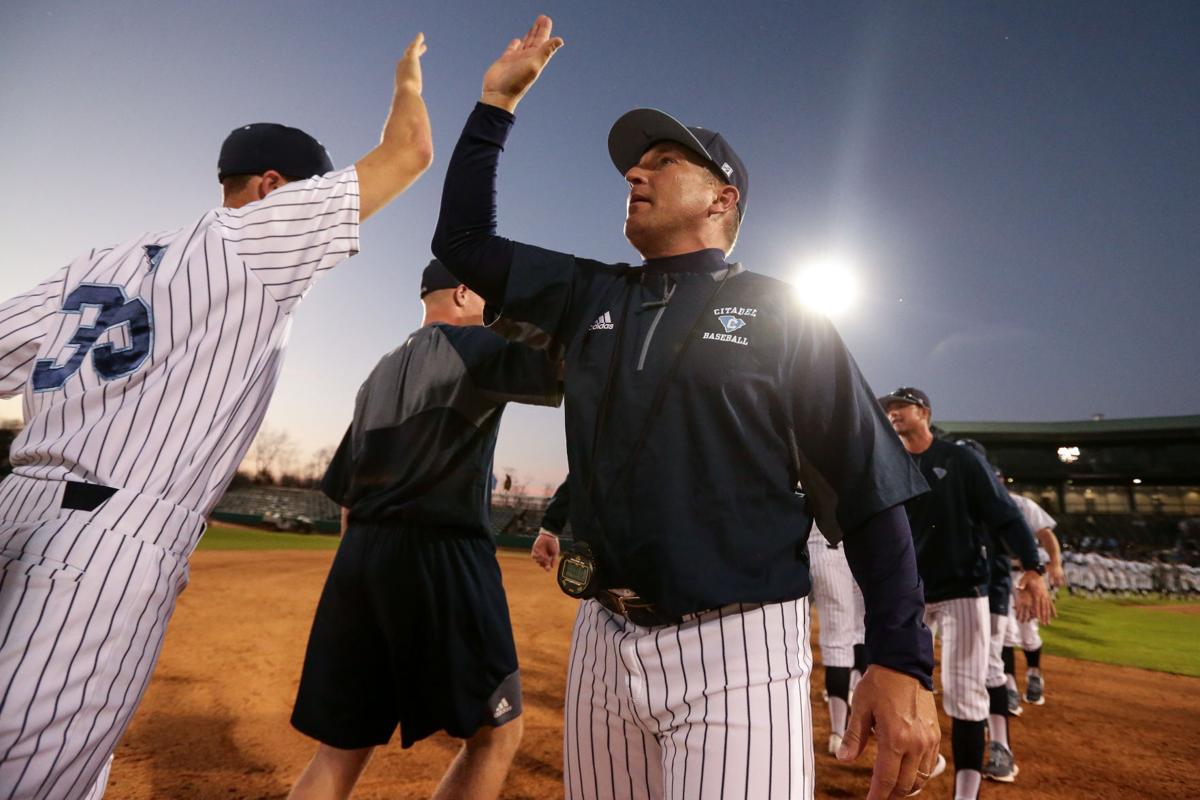 Mississippi State coach Chris Lemonis, a 1992 Citadel graduate, is presented a commemorative bat by Citadel assistant Zach Lucas before a game on May 5. Jeff Hartsell/Staff

The moment was supposed to be a reunion for Lemonis and The Citadel head coach Tony Skole, teammates on the military school's storied 1990 College World Series team. Skole had similarly honored another member of that team, Louisville coach Dan McDonnell, when the Cardinals visited Riley Park in 2018.

But Lucas had to stand in for Skole, who was forced to miss the game after testing positive for COVID-19 on May 4, preventing an on-field celebration for the two former teammates and good friends.

Lemonis' Mississippi State squad, ranked No. 4 by Baseball America and headed for a key SEC series at South Carolina this weekend, won by 10-2 over a slumping Citadel team as football/baseball standout Brad Cumbest hit a 443-foot homer and drove in four runs.

But it was difficult for Lemonis to enjoy the victory with Skole sidelined due to COVID-19.

"It's kind of a bummer," said Lemonis, whose team is 33-10. "I'm happy we won, but disappointed that we didn't get to see Tony and didn't get to hang out. I feel for him, but this has been tough times with COVID for everybody, and I just hope he'll be tack out there coaching soon.

In a statement issued before the game, Skole said he had been fully vaccinated and felt fine.

"Yesterday, it was brought to my attention that I tested positive for COVID-19," Skole said. "Even though I have been fully vaccinated for over a month and feel fine, the test came back positive.

"Due to the safety of our players, staff and everyone else involved, I will not participate in our game this evening against Mississippi State. It should be a great night at the Joe and I'm extremely upset I am going to miss seeing my close friend and former teammate, Chris Lemonis. I know our Bulldog faithful will have a warm welcome for Lemo."

In Skole's absence, assistant coaches Blake Cooper and Lucas ran The Citadel. There is no word yet on how long Skole will be sidelined.

"It was a tough break for Tony and an unfortunate situation," Cooper said. "It's a tough situation for our guys, but we are built on toughness here at The Citadel. We've just got to keep putting one foot in front of the other and hope to goodness that Coach Skole is okay and that he continues to feel well, which he is right now."

Mississippi State scored single runs in the first and second, on two hits and two walks in the first and a sacrifice fly by Rowdey Jordan in the second. In the third, Citadel starter Cameron Reeves issued two walks before 6-5, 250-pound leftfielder Brad Cumbest stroked a two-run single for a 4-0 lead.

The Citadel's Ryan McCarthy tripled and scored on a wild pitch to make it 4-1, but Mississippi State broke it open with two-run homers by Logan Tanner and Cumbest in the fifth off reliever Jake Pilarski.

Tanner hit his ninth home run some 401 feet, but Cumbest — also a receiver on State's football team — out did him with a 443-foot shot to left for his fourth homer and an 8-1 lead.

Freshman first baseman Noah Mitchell hit his second home run in the fifth for The Citadel.

"I thought we played a clean game," said Lemonis, who got 13 strikeouts from seven pitchers. "We got pretty good pitching and played some good defense, with some timely hitting early in the game. We hit some bombs later in the game, but early on we were able to get some scratches with two outs and that was good to see."

Mississippi State will work out Thursday at The Citadel before heading to Columbia to take on the Gamecocks.