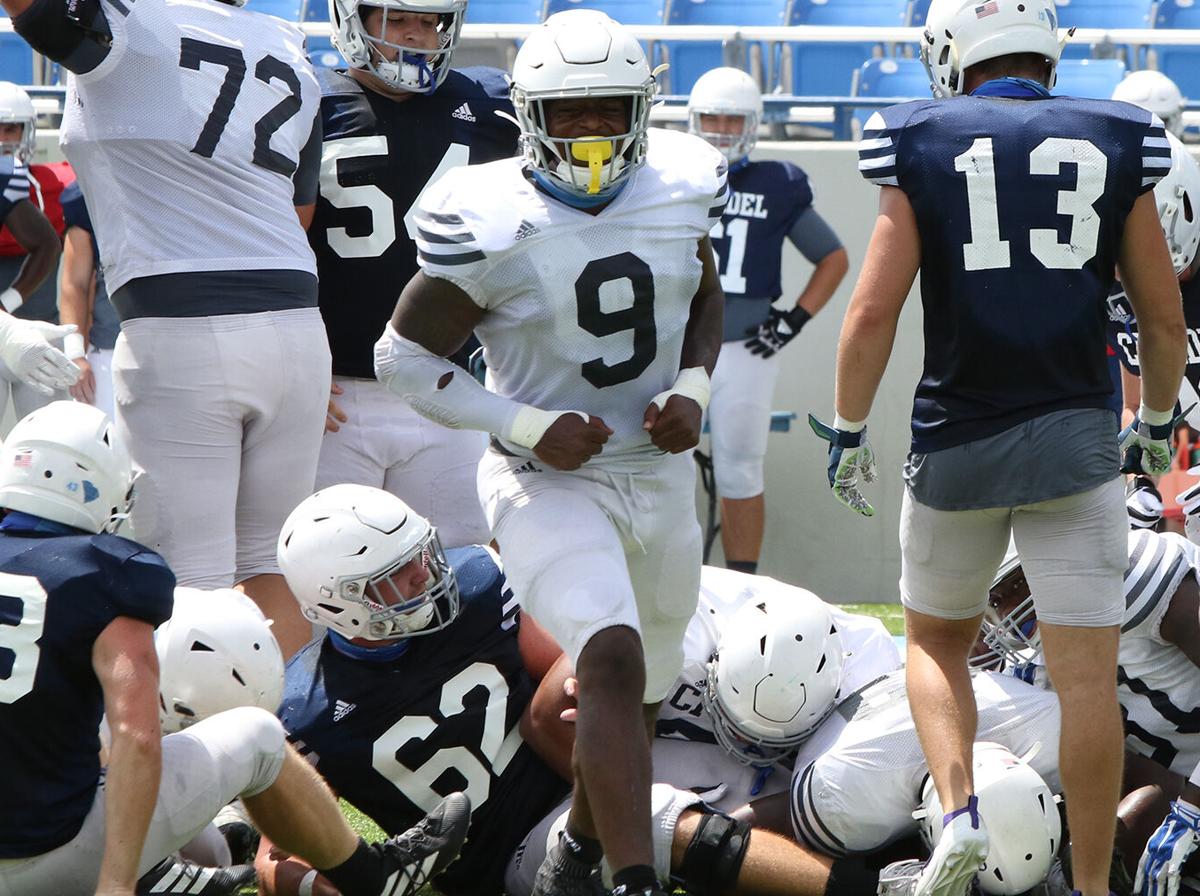 Willie Eubanks III is a preseason All-American linebacker for The Citadel. Provided/Citadel Athletics 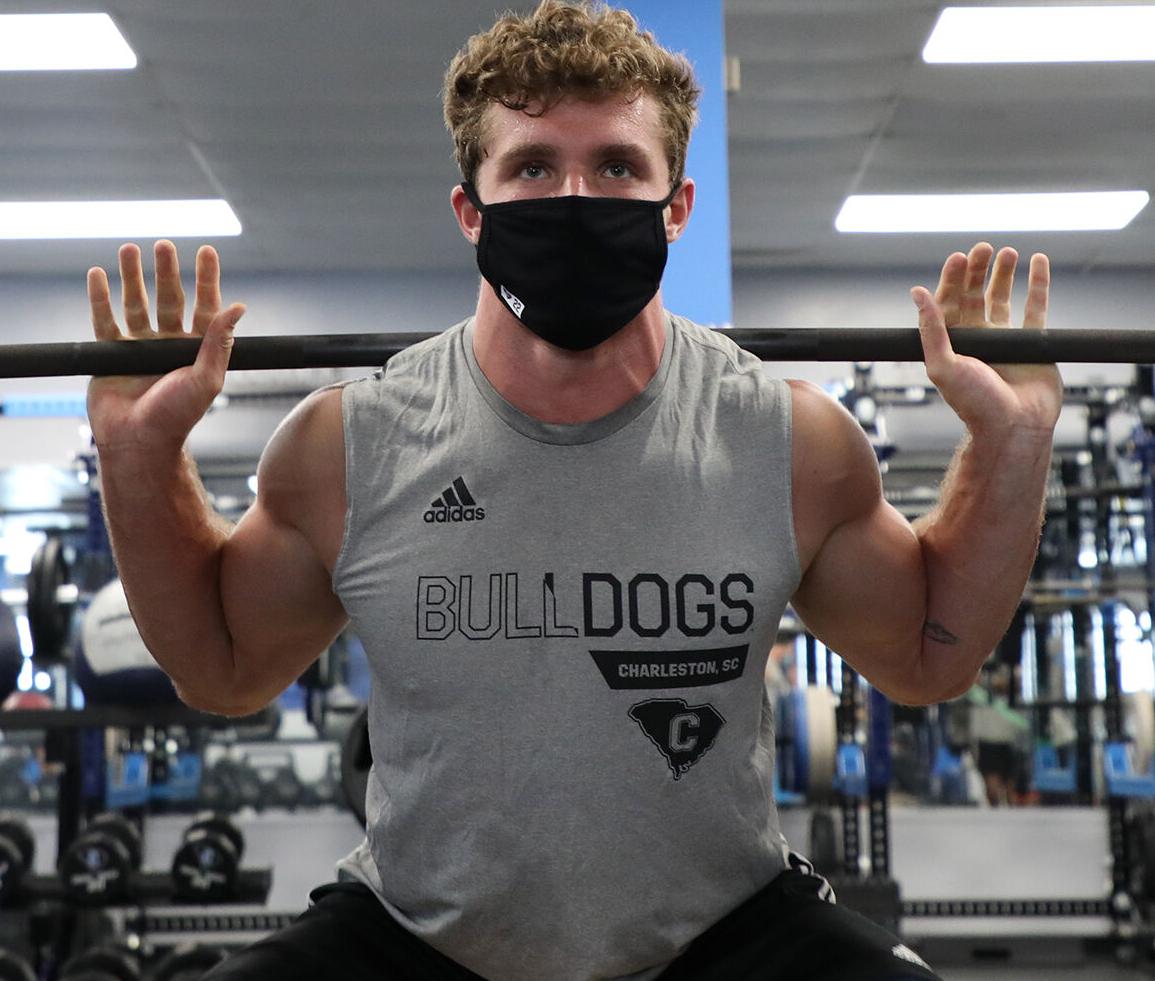 Citadel receiver Raleigh Webb works out with a facemask on over the summer. Provided/Citadel Athletics 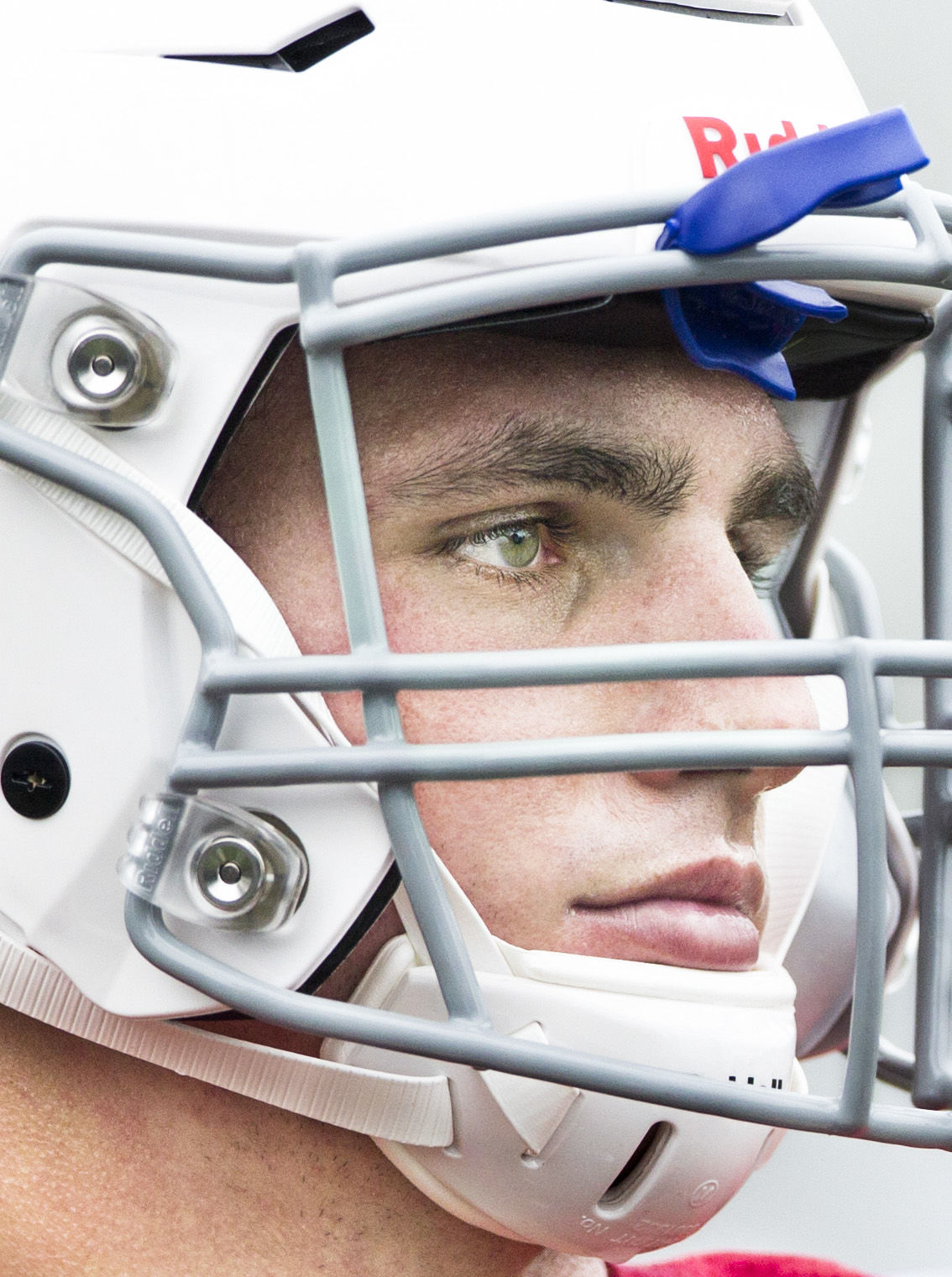 Eubanks, the Bulldogs' All-America linebacker, had just coached his team to victory over quarterback Rainey's squad in the Bulldogs' annual spring game, held on the military school's parade deck on a cool spring day in March.

"Most fun I've ever had in a spring game," coach Brent Thompson said that day.

But as spring turned to summer, that fun turned into grief, coronavirus-fueled uncertainty and conversations about social justice as the Bulldogs fought their way through a summer and preseason camp unlike any other in the program's history.

"As time went by, it felt more and more like a punch in the gut," said Rainey, also an FCS All-American.

Barring any last-minute changes, The Citadel will start an unprecedented four-game fall schedule Sept. 12 at South Florida. Road games at Clemson and at Army sandwich a Sept. 26 home game against fellow FCS member Eastern Kentucky, giving the Bulldogs a slate that includes games against three FBS squads that will bring in $950,000 in guarantee money.

"There's not many times we get to play three FBS teams in one season at The Citadel," Eubanks said. "So that's really boosted the guys' morale around the team."

But getting to this point was not easy. A summer of soul-searching for Citadel football began with a tragic death in April.

Eubanks was at home in Augusta, Georgia, last April when he got the news.

Ra'Shaud Graham, the Bulldogs' team chaplain and a 2016 graduate of The Citadel, had died in a drowning accident while kayaking in Berkeley County. He was just 26 years old.

"It was crushing news," said Eubanks. "And since I was not able to be at school with all my teammates, that really made it hard for a lot of people. This season, we will definitely be out there for him, and we know he'll be watching us."

Due to the coronavirus pandemic, the football players and the rest of the Corps of Cadets had been sent home shortly after that March 7 spring game. There was little chance for shared hugs and fellowship as the Bulldogs grieved the loss of their "big brother."

'He had a gift': The short life and outsized impact of The Citadel's Ra'Shaud Graham

Citadel coaches had to jump on video-conferencing apps to inform and console their players about the death of Graham, who was campus director for the Fellowship of Christian Athletes.

"Ra'Shaud was a brother because had he had been through the same things we go through," Eubanks said. "We would go to him when we had problems throughout the year with school or anything else. He was a coach and a chaplain, but most of all he was a big brother to us."

Thompson thought so much of Graham that the head coach talked to him about taking a job on his coaching staff. Graham was set to be married in July and was looking forward to the next step in his career.

"Every single person on the team felt close to him, so that's a big loss for everybody," Rainey said. "We just want to do everything we can to honor him with how we play and carry ourselves on the field. To have a guy like that gone from this world, that's a big loss."

Graham's absence would be felt during the summer to come.

The Bulldogs squeezed in all of their spring practices before the coronavius pandemic shut down sports in mid-March, wiping out the college baseball season and March Madness, the NCAA basketball tournament.

Football players were not allowed to return to campus for voluntary summer workouts until mid-June for what strength and conditioning coach Donnell Boucher called a "phased-in" return to sports activities.

Despite careful protocols and guidelines, The Citadel had to halt the workouts just a week later as six athletes tested positive for COVID-19. By the time workouts  resumed and then finished the first week of August, the number of positive test results among athletes had reached 25.

"It was pretty different," Eubanks said. "Not being able to be here the whole summer working out and competing with the guys on the team each and every day was definitely different from what I was used to. It's something we all had to adjust to, but I feel like we did."

As fall camp opened on Aug. 7, 34 players did not report for the first practice. Some were simply waiting for test results, but others were not comfortable with playing football during the pandemic. Two players opted out of the season on that first day, including All-America running back Alex Ramsey, a graduate transfer from VMI. A total of six Bulldogs have now opted out of the season.

"Those guys stayed home for personal reasons, whatever they were," Rainey says now. "But for me, I was going to keep practicing until they told us we weren't playing or that we couldn't practice anymore."

The dangers of COVID-19 hit home for the Bulldogs when one Citadel player lost two of his grandparents to the virus in a three-day span in August.

Thompson said he "completely understands" why some players chose not to play this fall.

"It's been my approach that I'm here for the guys who want to be here and want to play football," he said. "I understand completely that, given where we are right now, it's not going to be comfortable for everybody. I completely understand that.

"The No. 1 thing is that I've got a mission to put together the best possible team that we can this fall. And then hopefully in the spring, we can bring those guys back in the fold and reformulate a different team, a team with some added members. This is nothing that's been faced by any head coach that I know of until now, so we are taking it day by day and making sure everybody has a good sense of comfort with where we are as a team. If you don't, we will come back when you do feel comfortable and get started again in the spring."

Meanwhile, the Bulldogs practiced for a couple of weeks without knowing if, or who, they would be playing this fall. The Southern Conference postponed its fall season on Aug. 13, a blow to a Citadel team that felt it could compete for its third SoCon title since 2015 and second under Thompson.

"At first, we were out there practicing and wondering who we were going to play," Eubanks said. "But then you started seeing that we're playing Clemson and South Florida, and then Eastern Kentucky and Army. That really made a big difference."

But the summer was not just about COVID-19 and football.

'I learned a lot'

On May 25, a Black man named George Floyd was killed in Minneapolis after a White police officer kneeled on his neck for eight minutes and 46 seconds.

The incident touched off controversy and protests around the nation, and sparked rallies and conversation on college campuses and among athletic teams. Those protests and conversations have been reignited after the shooting of Jacob Blake by police in Kenosha, Wisconsin, on Aug. 23.

Football players and other athletes at Clemson and South Carolina have spoken out and organized rallies in order to raise awareness. Obviously, cadet-athletes at The Citadel are not immune to those same feelings and desire for reform.

Issues of social justice have been the subject of Zoom calls and of social media posts for players and coaches. Over the summer, The Citadel brought in Black football alumni such as Lamar Sales and Travis Stephens to speak with the players about what they were feeling and dealing with.

"Getting to hear their perspective was important," Rainey said. "They are older and they went through the same challenges that still go on every day here. You hear about those guys, you see their jerseys hanging up in Seignious Hall, and then you get to talk to them and hear from them. They gave us a lot of wisdom, and it was a pretty cool experience."

Eubanks said the team met with Thompson just last week to talk again about those issues.

"We're a team and we're all brothers in my eyes," Eubanks said. "I think everyone looks at it that way."

But for some of Eubanks' teammates, the conversations have been eye-opening.

"I've learned a lot in those meetings," Rainey said. "As a White American, I don't understand what our African-American teammates go through. I love each and everyone of my teammates, and I try never to be neglectful. But just talking and being in these conversations, it definitely opened my eyes to some things."

They won't get to play for a SoCon championship this fall. They will only get to play one home game at Johnson Hagood Stadium. And they won't have quite the team they could have had for the 2020 season.

But for Rainey and Eubanks and most of their teammates, they will get to play football. And that means a lot.

"Last year, we were so close and we let some get away," Rainey said of the 2019 season, when the Bulldogs were 6-6 overall, 4-4 in the SoCon and in the hunt for the league title until the final week. "I felt like we were right there, so I really wanted to get back out there this fall. When all the stuff started happening in the spring, I thought there was no way it could affect our season. But now the season is here, and I'm ready to play football."

"For the seniors, it's our last year and we don't want to look back and say, 'Dang, our senior season went out like that?' Eubanks said. "I know I'm eager to get on the field. Things got canceled, some teammates didn't show up. I think it just showed us we had to push through and find a way."

The Citadel at South Florida