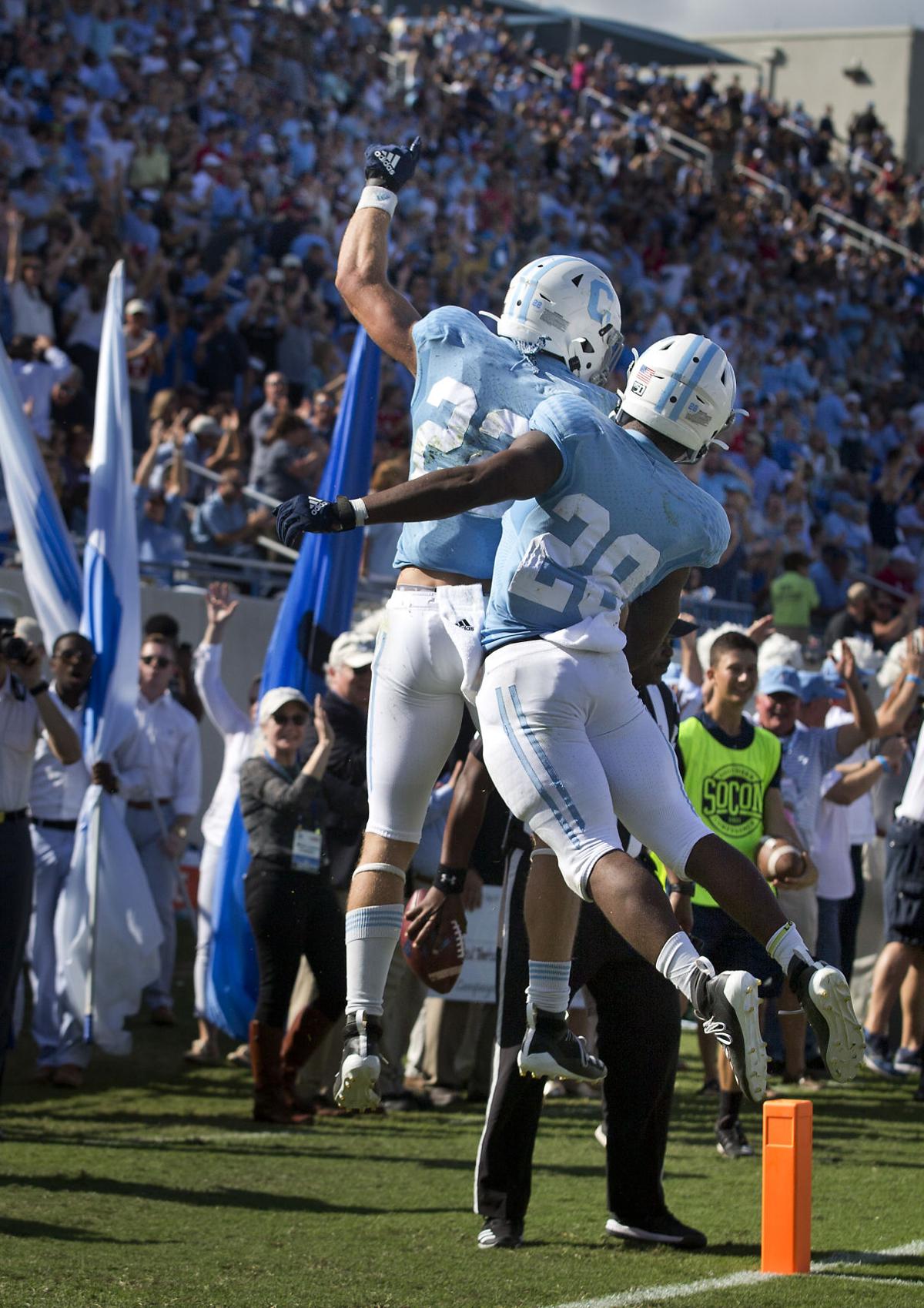 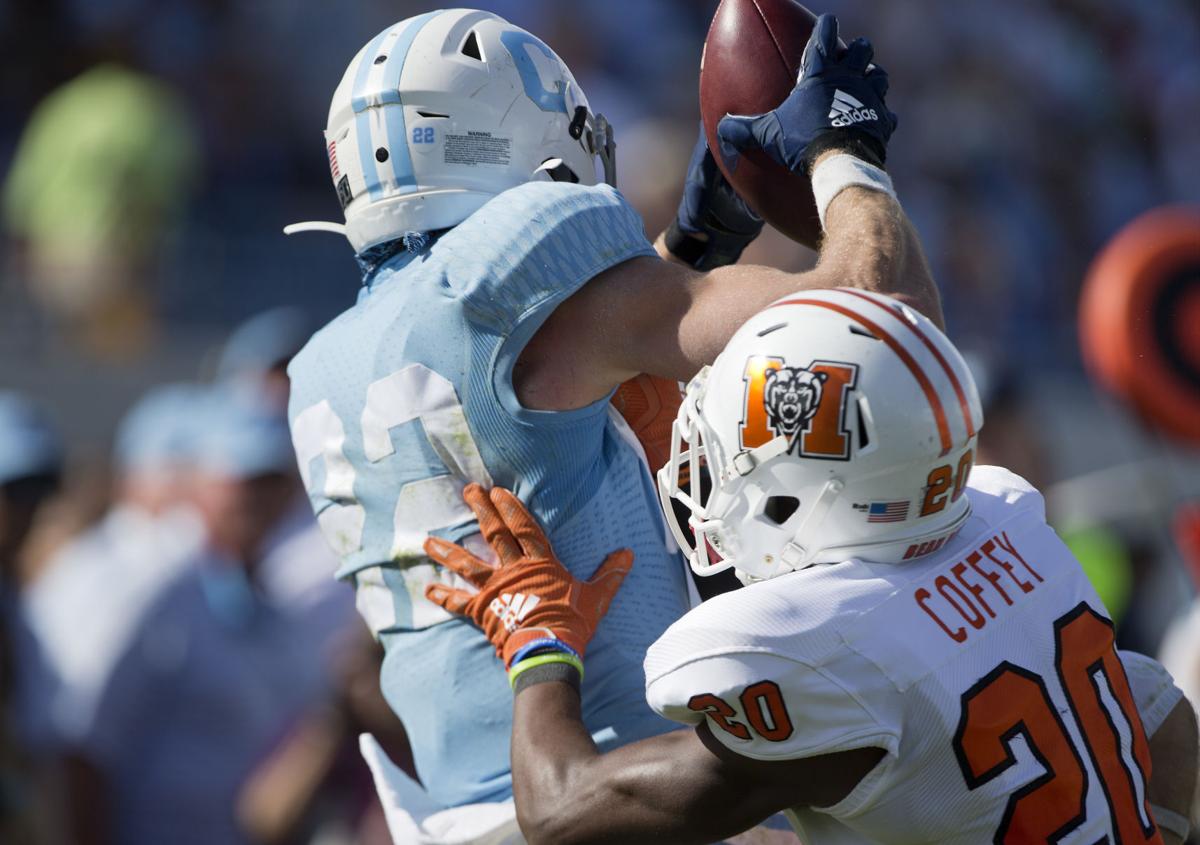 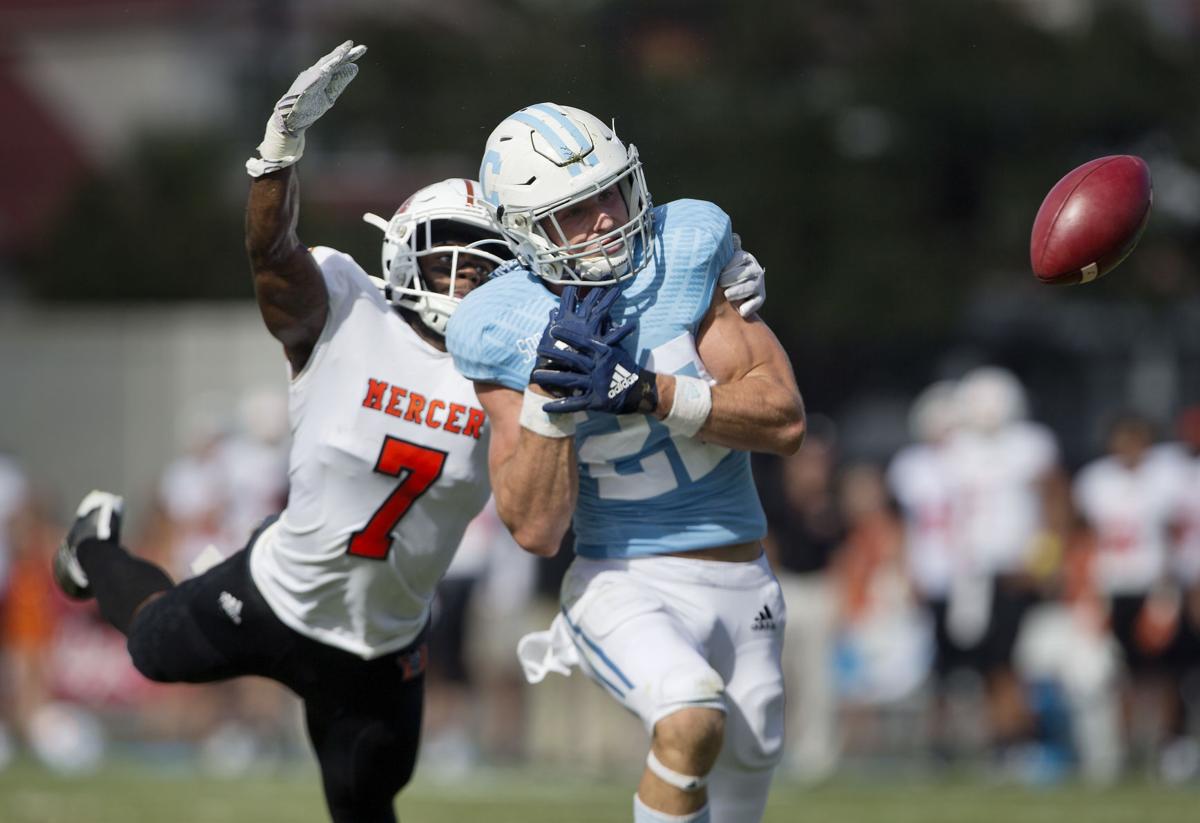 The Citadel's Raleigh Webb misses the pass as he is covered by Mercer's Eric Jackson Saturday, Oct. 26, 2019, at Johnson Hagood Stadium in Charleston. Grace Beahm Alford/Staff 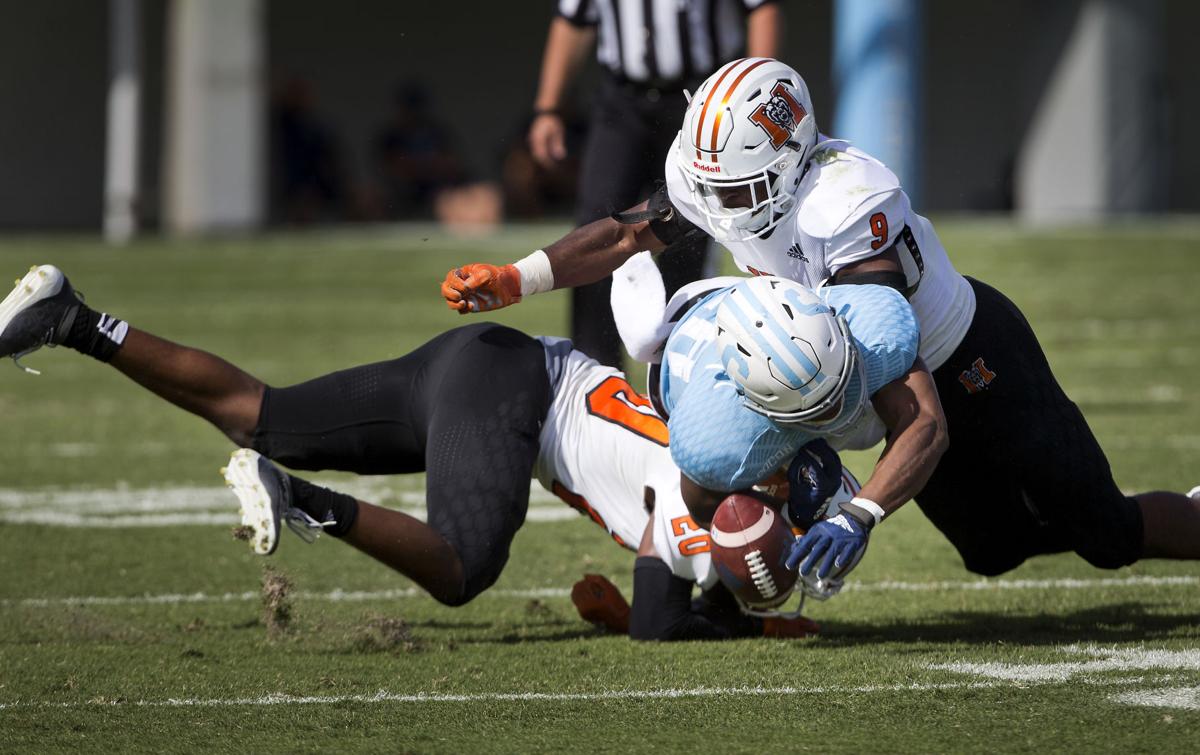 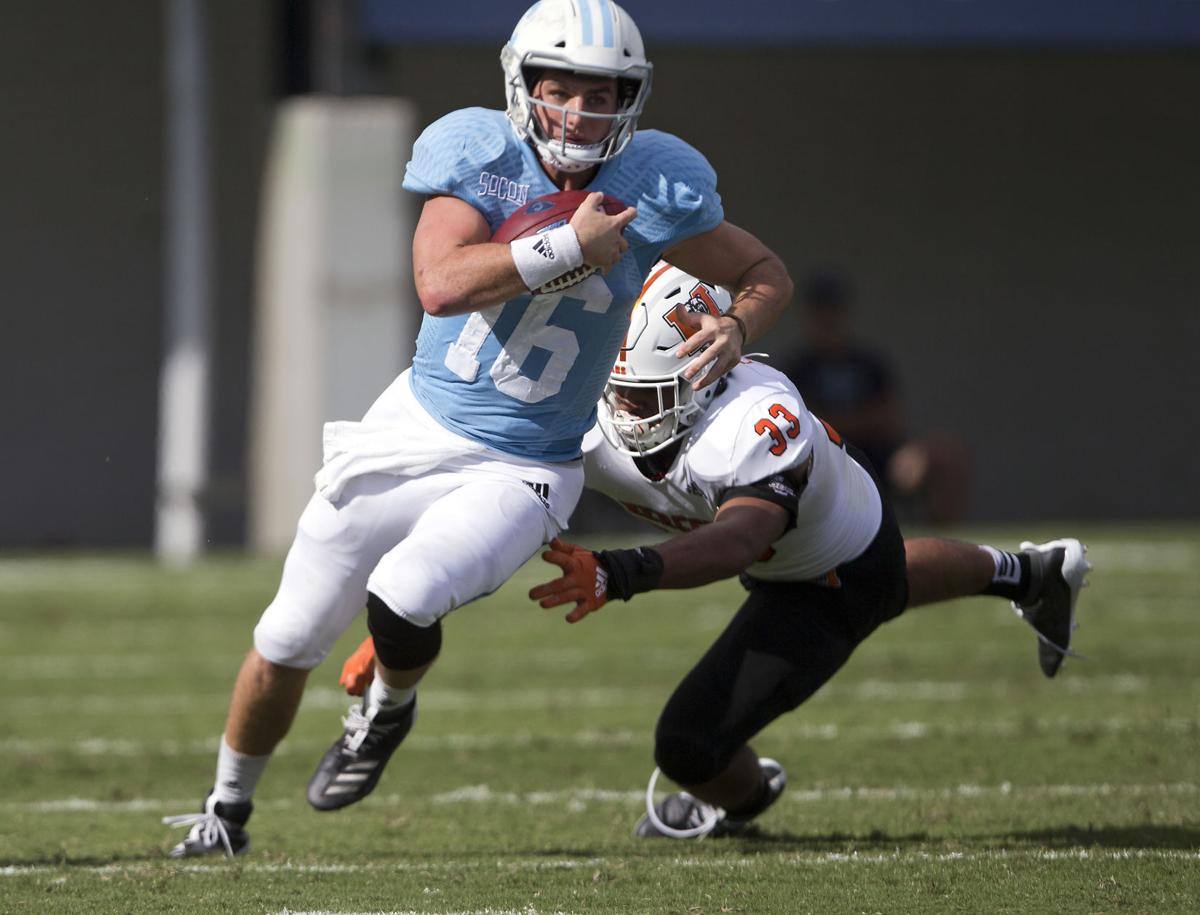 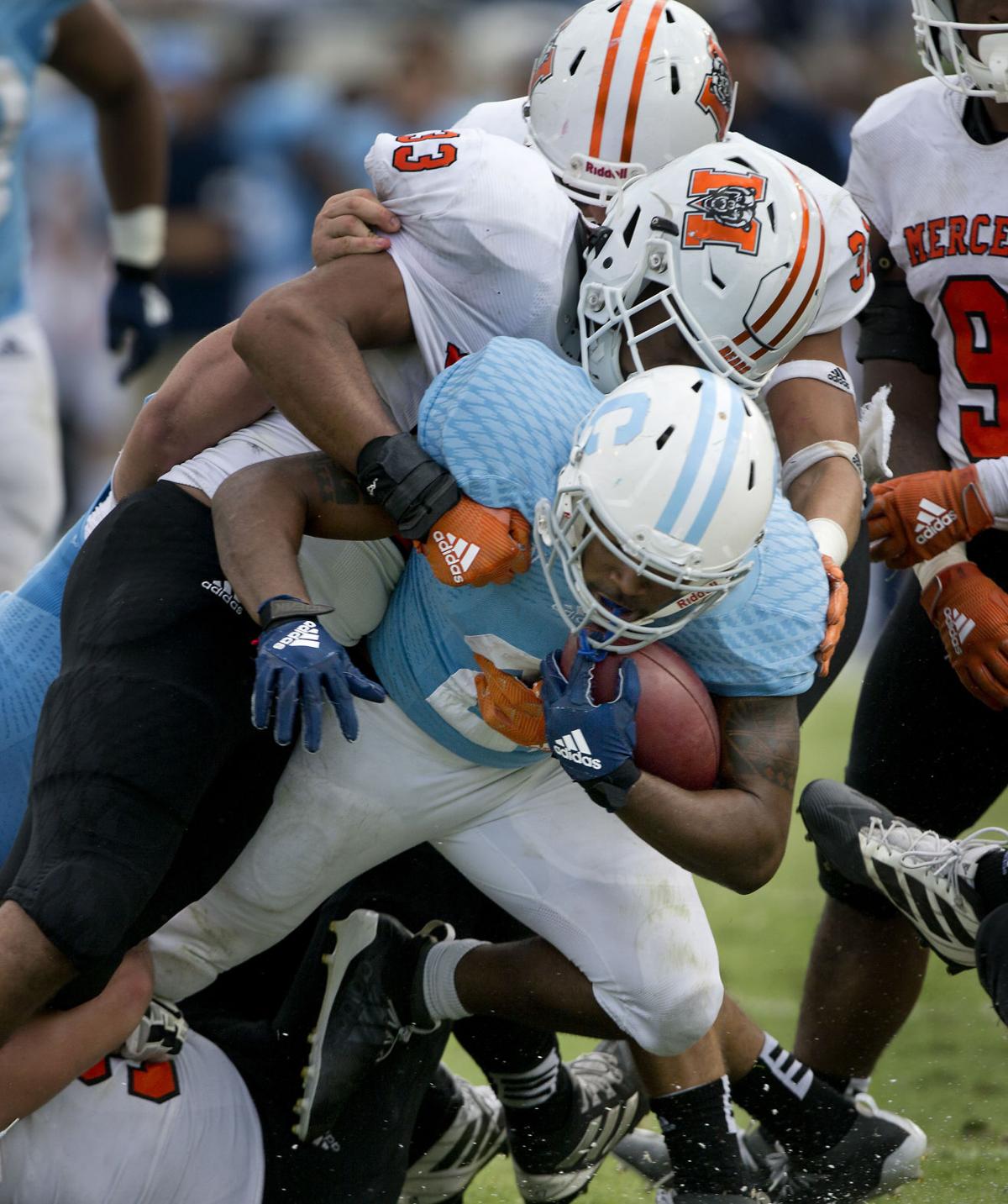 The Citadel's Raleigh Webb misses the pass as he is covered by Mercer's Eric Jackson Saturday, Oct. 26, 2019, at Johnson Hagood Stadium in Charleston. Grace Beahm Alford/Staff

A father-and-son reunion. A come-from-behind victory. And a place in the thick of the hunt for a Southern Conference championship.

It all made for a party-worthy homecoming game for the Citadel fans among a crowd of 11,439 at Johnson Hagood Stadium on a hot, humid Saturday afternoon.

Quarterback Brandon Rainey ran for 120 yards and accounted for two touchdowns, and transfer running back Remus Bulmer scored two clinching TDs in the fourth quarter as The Citadel won its third straight game, 35-24, over Mercer.

The Bulldogs (5-4 overall, 3-2 SoCon) are just a game behind co-leaders Wofford and Furman, both 4-1, in the conference standings. The Terriers and Paladins square off on Nov. 16, a week before Wofford comes to The Citadel for the regular-season finale.

The Citadel is at ETSU (2-6, 0-5) next week before a long-awaited open date, and finishes with games at Chattanooga (4-4, 3-1) and at home against Wofford. Contending status seemed a long way off when the Bulldogs began the season 0-2, then lost their first two SoCon games.

“It's a great feeling,” said junior tackle Denzel Wright, who helped pave the way for a season-best 378 rushing yards. “This is a family around here, and we just keep fighting for each other.”

But the Bulldogs' defense held Mercer to 61 rushing yards, and The Citadel put together a dominant offensive profile: 14 of 17 on third down, 74 plays for 409 yards and 37:15 in time of possession.

Fullback Clay Harris ran for 90 yards, and Bulmer, the transfer from Sam Houston State, had his best day as a Bulldog with 66 yards on 10 carries, two scores and a 31-yard kickoff return. Dante Smith averaged 7.7 yards per carry for 54 yards and Nkem Njoku scored his first career TD.

Still, the Bulldogs somehow found themselves trailing 24-21 with two minutes left in the third quarter. Bears defensive back Lance Wise ripped the ball away from Citadel receiver Raleigh Webb on a reverse and raced 41 yards for the go-ahead touchdown.

But The Citadel answered with its best drive of the game, a 16-play, 81-yard march that ended with Bulmer's 9-yard TD scamper and a 28-24 lead.

Mercer's David Durden came down with a miracle catch on a fake-punt pass to keep the Bears' hope alive. But blitzing Citadel linebacker Sean-Thomas Faulkner broke through for a fourth-down sack of Riley, and Bulmer iced the game with his second TD, from 5 yards out, with 1:17 to play.

“I got put in a perfect position by my coach, so I give all the credit to him,” Faulkner said. “I just came through and tried to get the quarterback down, not make a big hit or anything like that. That was only my second sack, so it was a big play for me.”

The Citadel had four scoring drives of more than 4:34, but it was a 16-second quick strike that kept the Bulldogs ahead at halftime.

RECORD BREAKING!@BRainey_7 ➡️ raleighwebb_2 gives Brandon his 23rd touchdown of the year which is a school record for most total by a QB!#FireThoseCannons | #BeatMercer pic.twitter.com/COVaMHbUTg

“This win really speaks a lot to the character of our guys after the VMI loss,” Thompson said. “We took that one pretty hard, and a lot of people counted us out. But nobody in that locker room counted anybody out.”

• An emotional high point came when Citadel freshman Tereis Drayton of James Island was surprised by the return of his father from military deployment. Drayton was called to the field during a break to be recognized for an award, a ruse to allow his dad to sneak up from behind and give him a hug.

It was an amazing surprise!!! I appreciate everybody @CitadelFootball who made this possible ! https://t.co/sbzPRcd1IS

• Senior slotback Keyonte Sessions returned from suspension that lasted five games and carried twice for 13 yards … Linebacker Marquise Blount, who won the last two SoCon player of the week awards, sat out with an injury … Linebacker Willie Eubanks led the Dogs with 12 tackles, and linebacker Kyler Estes had a sack … Linebacker Phil Davis intercepted a pass in the final seconds.

Photos: Homecoming win at The Citadel over Mercer Bears

The Citadel wins 35-24 over Mercer Bears at Johnson Hagood Stadium during their Homecoming game.