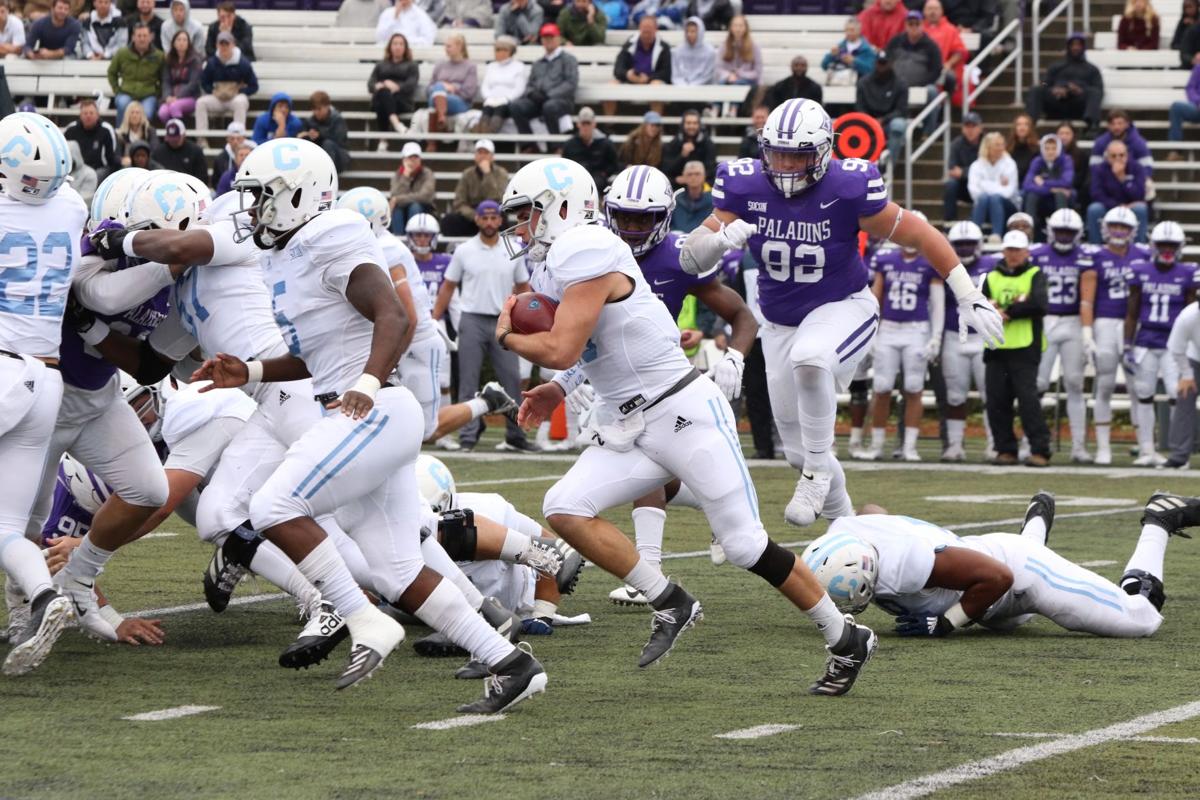 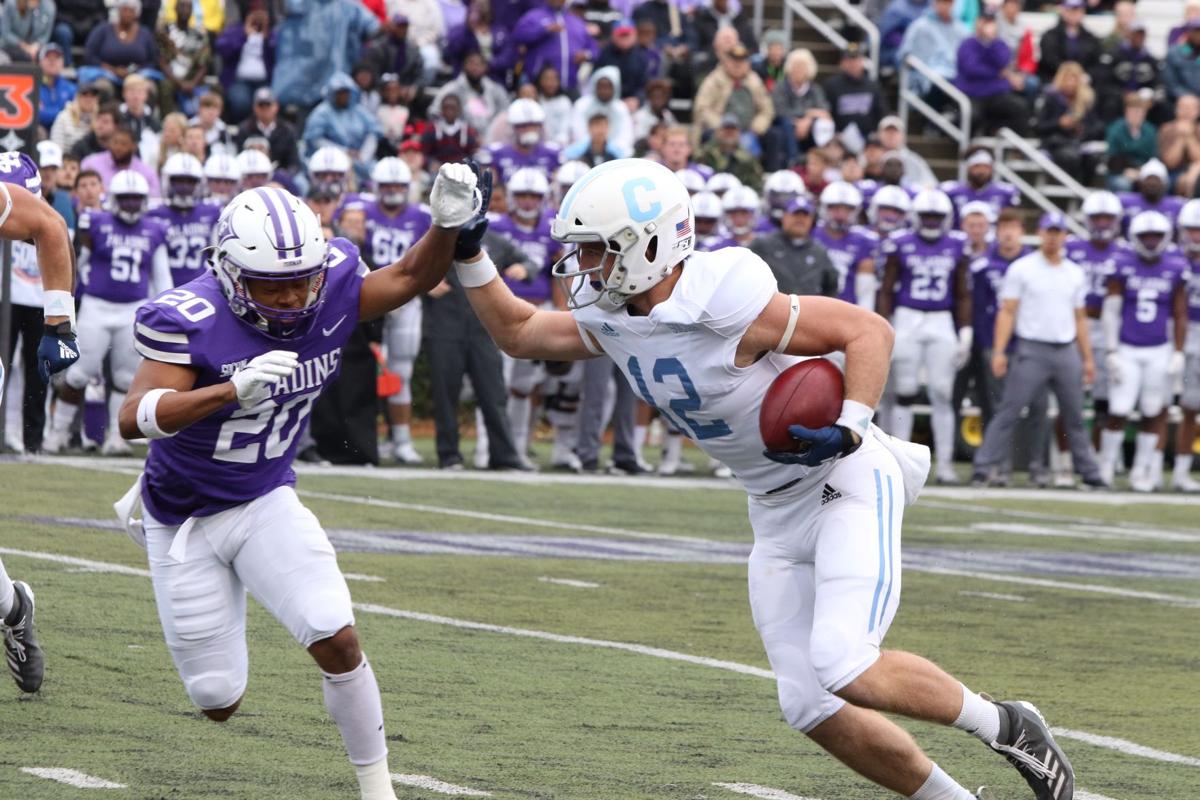 The Citadel's Ryan McCarthy fends off a Furman defender. 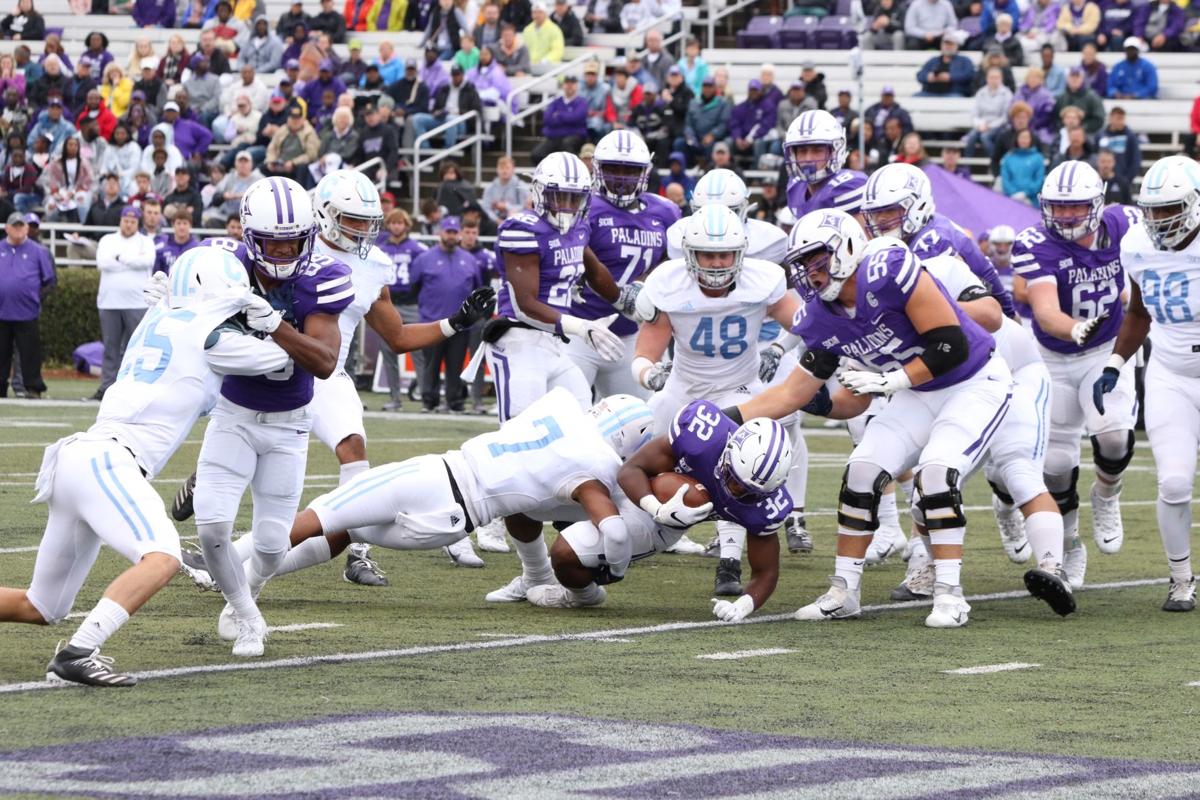 The Citadel's Destin Mack (7) makes a tackle against Furman.

The Citadel's Ryan McCarthy fends off a Furman defender.

The Citadel's Destin Mack (7) makes a tackle against Furman.

GREENVILLE — Fog rolled in over Paris Mountain while a chilling, wind-blown rain added to the misery index at Paladin Stadium on Saturday.

But nothing could dampen Citadel spirits after the Bulldogs pulled off their second shocking upset of the season. The happy sounds of "Celebration" thumped from the locker room as Citadel players kicked it old school after a 27-10 upset of rival Furman, ranked No. 8 in the nation in FCS football.

Furman was an 18-point favorite over The Citadel, not quite as daunting as the 26-point spread the Bulldogs faced at ACC member Georgia Tech, where The Citadel won 27-24 on Sept. 14.

But Citadel linebacker Marquise Blount was clear: Don't call it an upset.

"I wasn't surprised," said Blount, whose strip-sack of Furman quarterback Darren Grainger set up a decisive touchdown in the third quarter. "I know we prepared all week to win this game, and we came out here and expected to win this game.

Jeff's Take: For Citadel football, how many rivals are too many?

Did they ever. Bad weather apparently kept a contingent of 450 knobs from making the trip from Charleston to Greenville, but the football team definitely showed up.

The Citadel (4-4, 2-2) knocked Furman (4-3, 3-1) from its unbeaten perch in the Southern Conference with a dominant performance on both sides of the ball, spoiling the Paladins' homecoming before a crowd of 6,603.

Quarterback Brandon Rainey, in his best effort since the win over Georgia Tech, ran for 165 yards on 26 carries as The Citadel totaled a season-best 360 rushing yards, the most allowed by Furman this season.

Dante Smith, Remus Bulmer and Clay Harris each ran for TDs, and Jacob Godek kicked game-sealing field goals of 30 and 46 yards in the final five minutes.

Citadel coordinator Tony Grantham's defense was even better, holding Furman to season-worst totals of 10 points and 216 yards, the Paladins' fewest yards since 2014.

Grainger, a thus-far impressive redshirt freshman QB, was a disastrous 5 of 25 for 44 yards and was sacked twice as The Citadel beat a ranked FCS team for the first time since a 22-14 win over No. 5 Chattanooga in 2016.

"We said it would take our best effort to win, and we gave them our best effort," said Citadel coach Brent Thompson. "That's the best I've seen us play in about two or three years, to be honest with you."

Furman, averaging 37.5 points and a SoCon-best 463.5 yard per game, managed 172 yards rushing as Devin Wynn ran for 88 yards and a TD on 15 carries. But the Paladins were just 3 of 14 on third down and 1 of 4 on fourth down, and their longest play from scrimmage went for only 15 yards.

"That's the best I've seen our defense look," Thompson said. "They played on edge and did a great job against a very explosive, high-octane Furman offense. My hat's off to coach Grantham, he had a wonderful scheme and the players executed it."

Despite three first-half turnovers (two of them fumbles by Rainey in the red zone), the Bulldogs held a 7-3 lead at the half, the first time all season the Paladins had trailed at intermission.

"I take the blame for that 100 percent," said Rainey. "These guys are out there blocking their butts off and I'm out there fumbling. That's 100 percent my fault, and I've got to get better at that."

But The Citadel broke it open in a 90-second stretch of the third quarter.

After punter Matthew Campbell twice buried Furman inside its 10-yard line, the Paladins shanked a punt to give the Bulldogs the ball at the Paladins' 31. The Citadel lined up in the wishbone and ran six times for 31 yards, with Smith's 4-yard score giving the Bulldogs a 14-3 lead with 5:14 left in the third.

Citadel football's 'Macdaddy' dragged into spotlight - by his own quarterback

Blount, who had six tackles, followed with a strip-sack of Grainger on third down, tackle Dewey Greene IV recovering at the Paladins' 13. Bulmer scored from 8 yards out for a 21-3 lead at 3:33.

"Tony has been moving Marquise around a lot," Thompson said of Blount, who was the SoCon defensive player of the week last week. "He's putting him on the run, which is what he's best at, and we're getting a lot of pressure on the quarterback with him."

"They just outplayed us in every way, shape and form," said Furman coach Clay Hendrix. "They outcoached us and outplayed us, and I give them all the credit."

Don't look now, but after an 0-2 start, the Bulldogs might be back in the SoCon hunt at 2-2. Surprise leader Chattanooga (3-0) is the only team yet to lose in league play, and the Mocs are at resurgent Wofford (3-1 after a 59-7 win at Western Carolina) next week.

The Citadel has Mercer next week, followed by games at ETSU (0-4 in the league) and at Chattanooga before the regular-season finale at home against Wofford.

"I think we are in the hunt," Thompson said. "We've got a lot of SoCon games left to play, a good one next week against Mercer. We should be excited at this point."

• Campbell returned to action after missing three games and averaged 39 yards on three punts, with a long of 45. Two third-quarter punts were downed at the Furman 5 and 7-yard lines.

• Slotback Nkem Njoku had his best game as a Bulldog, with 58 yards on just four carries ... Furman's lone interception came on a reverse pass by Citadel receiver Ryan McCarthy ... Safety Chris Beverly led The Citadel with eight tackles, and Blount and Sean-Thomas Faulkner had one sack each.

Sapakoff: A formula for a Gamecocks win streak to save the season