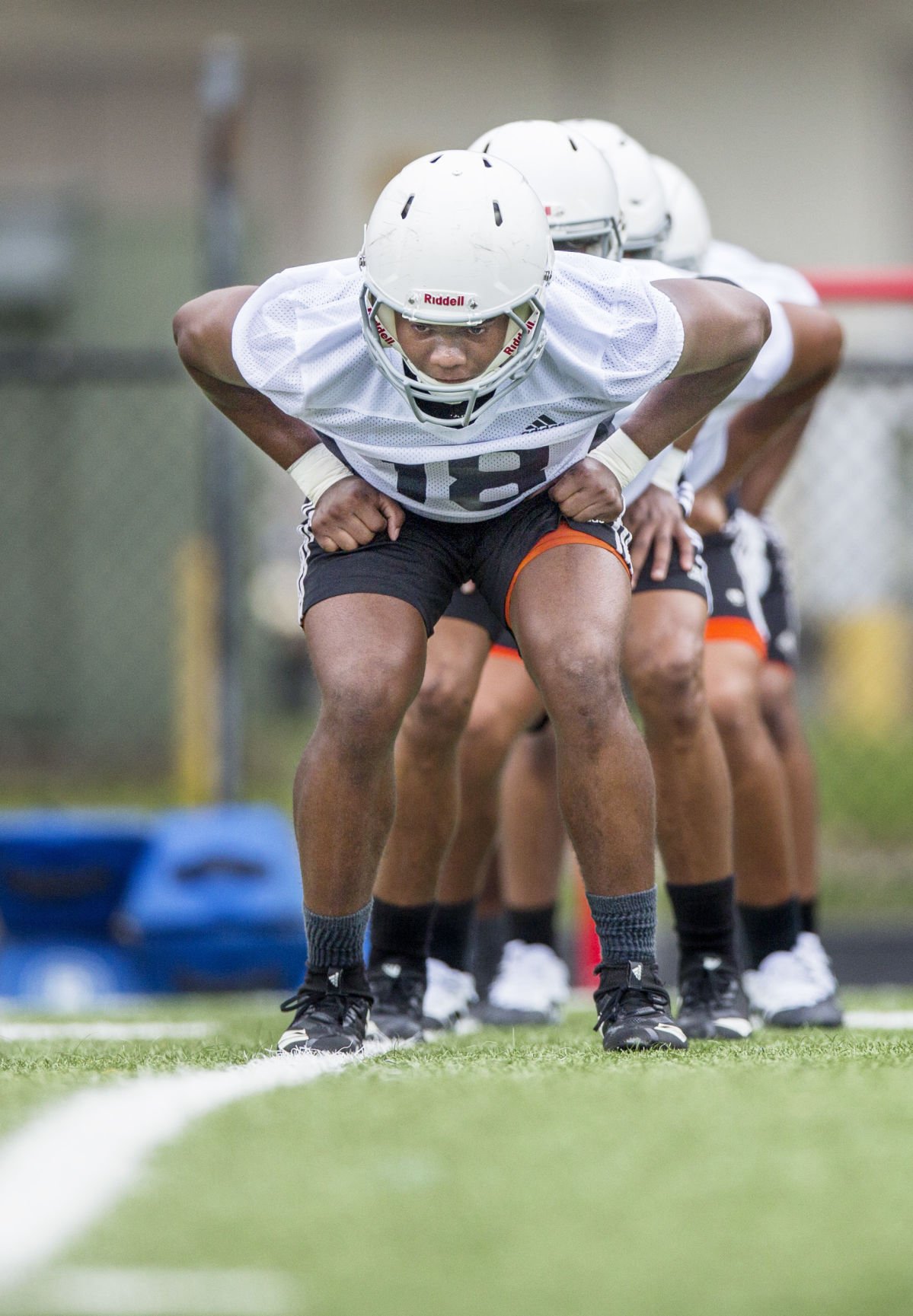 The Citadel's Dante Smith (18) goes through drills during the Bulldogs' first practice on Aug. 2. The Citadel opens the season against Towson at Johnson Hagood Stadium on Aug. 31. Gavin McIntyre/Staff 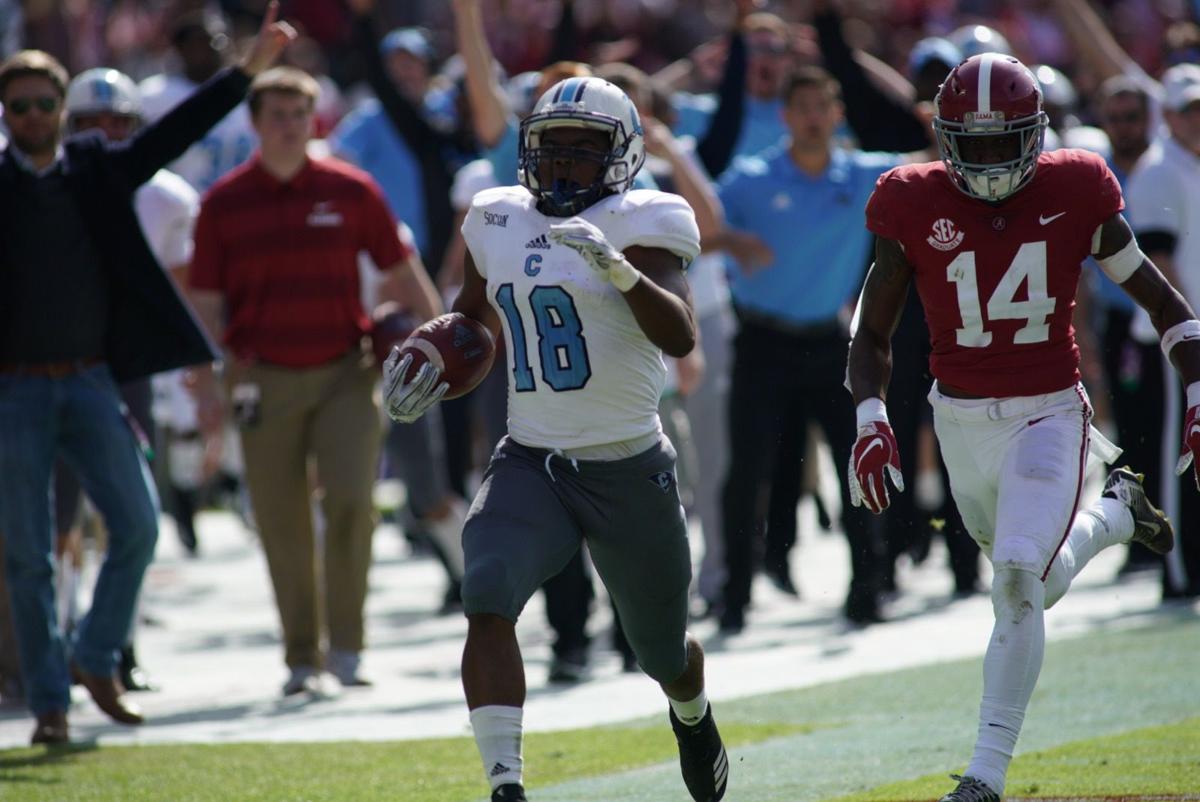 The Citadel's Dante Smith runs for a 45-yard touchdown in the first half against Alabama. Smith finished with 130 yards and two touchdowns. Provided/Citadel Athletics

Those are the only four running backs ever to run for at least 100 yards and two touchdowns in the same game against a Nick Saban-coached Alabama football team.

Elliott and Gurley are NFL stars with the Cowboys and Rams, respectively; McFadden played 13 years in the league.

Dante Smith? He's back for his redshirt sophomore season at The Citadel.

"Honestly, that game was kind of a blur at first," said Smith, the Porter-Gaud product who toasted No. 1 Alabama for 130 yards and two touchdowns on nine carries last season. "It happened so fast. But the environment there was crazy and it was a really good experience."

Indeed, Smith was Twitter-famous for a couple of hours on that Saturday afternoon of Nov. 17, 2018.

"He gets his fair share of jokes in the locker room," Citadel quarterback Brandon Rainey said of Smith. "One of the guys calls him 'Bam Bam.' When I see something on Twitter about him, I make sure I send it to him.

"But Dante is one of the most humble kids I ever met. He never let it go to his head, but I think he secretly takes pride in it. You've got to; it's one of the coolest things I've ever seen."

Let’s give a big shoutout to Dante Smith of The Citadel.The freshman became the first player with 130+ rushing yards and two touchdowns against Alabama since Ezekiel Elliott (2015). pic.twitter.com/ptnzO5P9ZS

Smith's 45-yard touchdown run in the second quarter shocked the 101,681 fans at Bryant-Denny Stadium, tying the game at 7-7 and leading to a 10-10 halftime tie against the mighty Crimson Tide.

"I just saw the end zone ahead of me, and I said, 'Oh shoot, is this really happening?'" Smith recalled.

And he proved it was no fluke with a 44-yard TD run in the fourth quarter off a similar option pitch from Rainey.

Alabama pulled away for a 50-17 victory, but Smith's 130 yards were more than Louisville, Ole Miss, Missouri, Tennessee, LSU and Mississippi State totaled against the Crimson Tide last season.

"I got a lot of Twitter notifications, a lot of texts from friends and family," the 5-10, 180-pound Smith said. "I guess it got enough publicity that a lot of people reached out to me."

Smith began last season as a backup to seniors Grant Drakeford and Rod Johnson, rushing for 273 yards and those two Alabama touchdowns while averaging 6.7 yards per carry.

This season, he's slated to start at slotback along with junior Keyonte Sessions, with sophomore Nkem Njoku and transfer Remus Bulmer also projected to be in the two-deep.

"We consider him a veteran, even though he's just a redshirt sophomore," Citadel head coach Brent Thompson said. "He got a lot of reps last year, and he's even at the point where he can start coaching up the younger backs."

Smith, who was zoned to attend public school at Fort Dorchester, started at private school Porter-Gaud as a seventh-grader. He was a football and basketball standout, playing on a state championship basketball team along with stars Josiah James, Aaron Nesmith and Jake Lanford.

Smith, who played receiver for the football team, attended several camps at The Citadel.

"We really liked his speed," Thompson said. "He was a wide receiver and was catching vertical routes, which is what we ask our A-backs to do.

"And we got to know Dante at our camps and we thought he was a good fit overall with the school. And he's been a very good student, so that's the No. 1 thing."

A finance major, Smith likes to play chess and spikeball at the beach with his buddies. He also dabbles in the stock market.

"I want to go into finance and investment banking, so I'm always looking at the trends," he said. "I have a little money in the market, as much as I can."

As Nick Saban can attest, buying stock in Dante Smith might be a good idea.

American football in Turkey? It's a thing, a former Citadel standout learned

• Tuesday was the first day in full pads for The Citadel during preseason practice ... James Island product Tereis Drayton is one of the true freshmen making an early impact. The 6-2, 280-pounder is working with the second team at center behind starter Haden Haas.

• New defensive coordinator Tony Grantham's work installing a new 3-4 defense continues. Unofficially, the first team looks like Joseph Randolph II, Dalton Owens and Aaron Brawley up front, with transfer Airan Reed and Willie Eubanks III at inside linebacker and Marquise Blount and Joe Douglas at outside linebacker ... Lane Botkin and Phil Barrett have been at cornerback, with Chris Beverly, Sean-Thomas Faulkner and Destin Mack at safety.

The only running backs to gain 100 yards and score two touchdowns against a Nick Saban-coached Alabama team:

'It gave us closure': Citadel QB ready for new season after friend's death

After the death of a close friend, Citadel quarterback Brandon Rainey has gained closure and is ready for a new role and a new season.