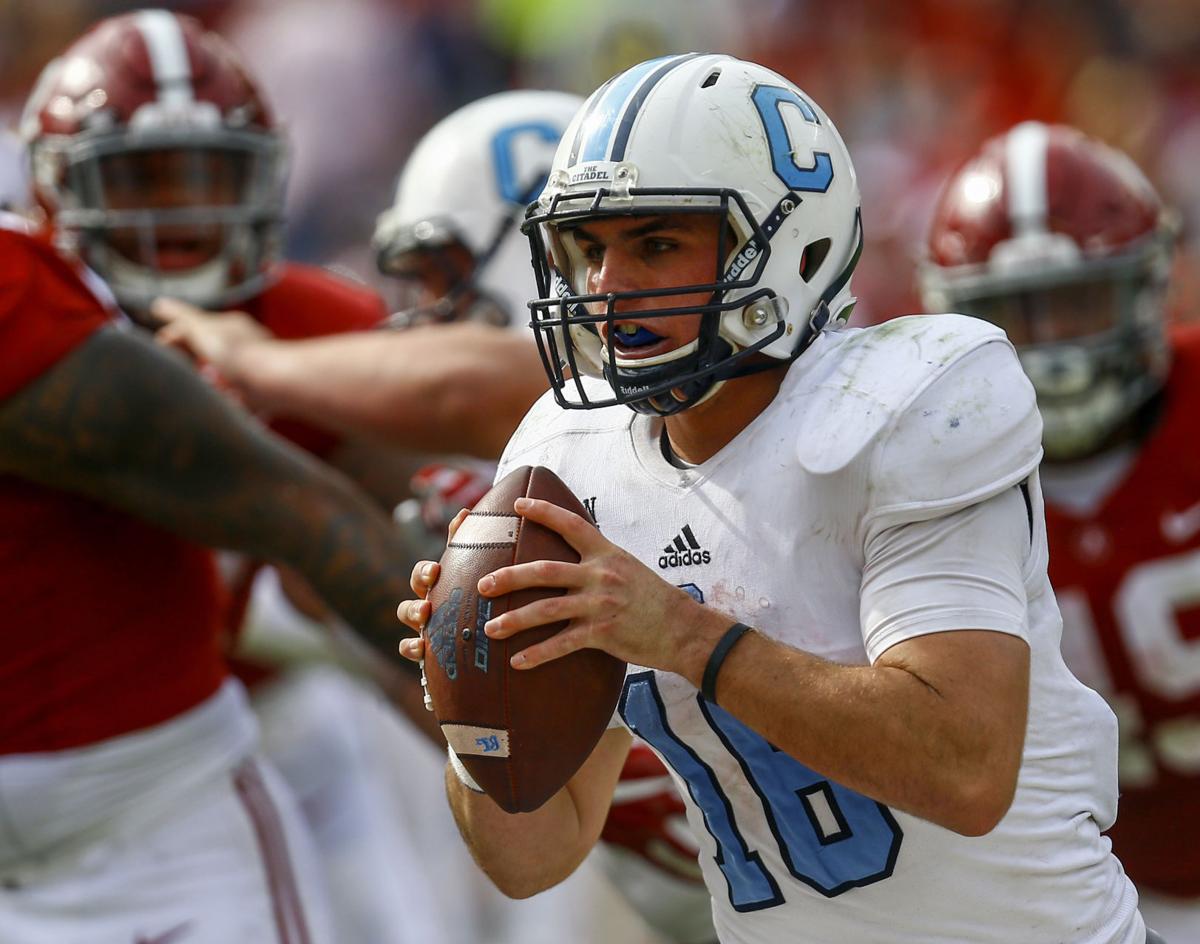 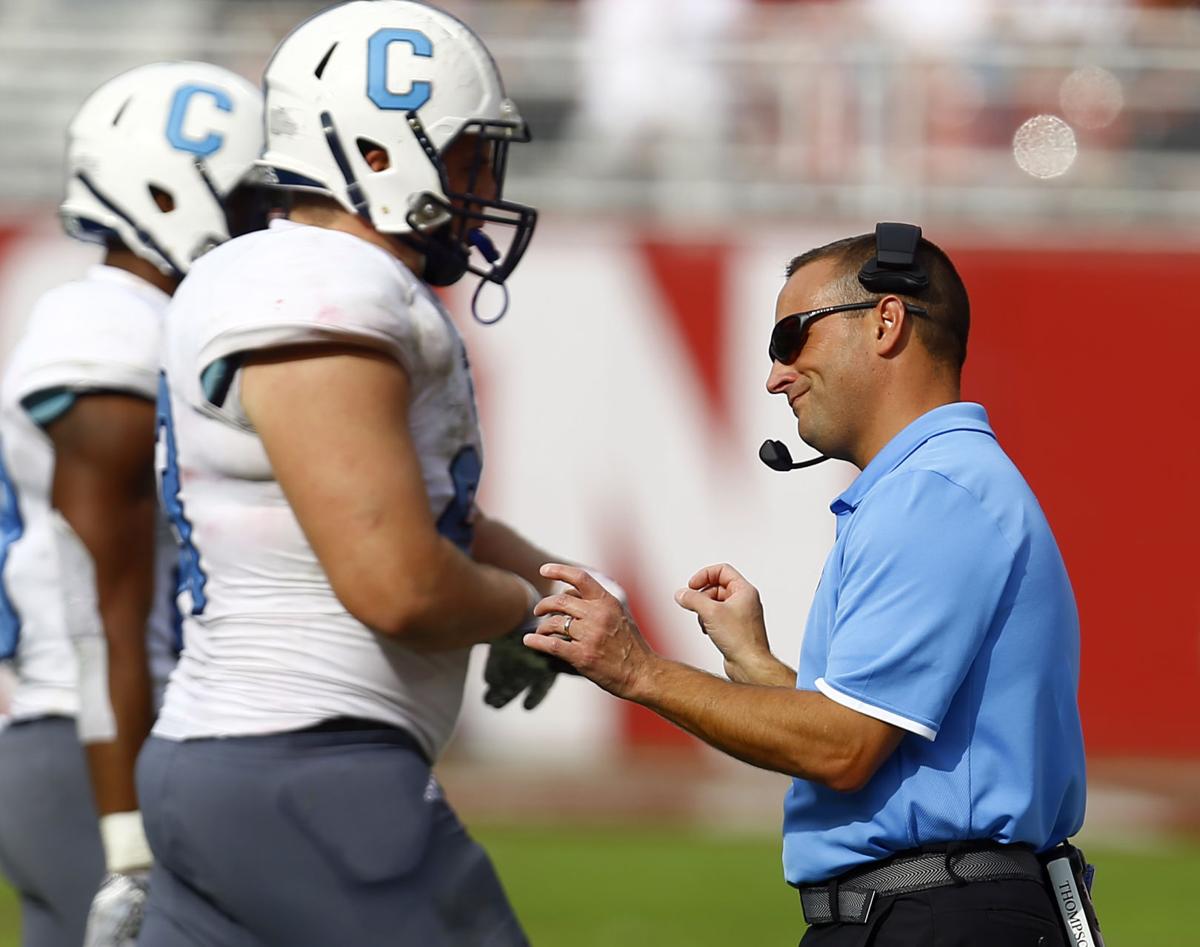 Citadel head coach Brent Thompson says it is a 'flat-out joke' that the Bulldogs were picked to finish seventh in the SoCon this season. (AP Photo/Butch Dill)

SPARTANBURG — Citadel football coach Brent Thompson on Monday unveiled the topic of his speech for the Bulldogs' first team meeting of the 2019 season:

SoCon coaches and media provided Thompson with his talking points by picking the Bulldogs to finish seventh in the nine-team league in polls released on media day.

"It's a flat-out joke," said Thompson, whose team returns 19 starters from a 5-6 squad that went 4-4 in the SoCon, tied for fifth place, in 2018. "I think that's the biggest thing that I've taken away from today, is how little respect we have right now, and that's OK with me.

"But you look at the way we ended the season last year, and the fact that we played a lot of the teams in this room to within a touchdown, and we're still picked seventh? We're going to use that as motivation. This is going to be the first thing we talk about in our team meeting."

Defending champion Wofford is the consensus pick to win the SoCon again next season, with coaches and media both placing Furman second and ETSU third.

Last year, The Citadel defeated two teams ranked above it (Mercer and Samford) in the 2019 poll. And the Bulldogs lost to Wofford, Chattanooga and ETSU by a total of 11 points, including a one-point overtime loss to the Mocs and a 3-point loss to ETSU.

But the most important item that SoCon coaches and media may have overlooked is The Rainey Effect.

Before rising junior Brandon Rainey took over as starting quarterback in the eighth game of the season, the Bulldogs' triple-option offense averaged 264 rushing yards and 26.8 points while going 2-5, all against FCS teams.

In their final three games against FCS teams, with Rainey at quarterback, the offense averaged 331.3 rushing yards and 41 points per game in victories over Western Carolina, Samford and Charleston Southern.

Rainey ran for 529 yards and three touchdowns in those four games, averaging 132.2 yards per game and finishing as the team's second-leading rusher despite not appearing in seven of 11 games.

"It was just a different approach to playing football that Brandon has, and he was able to rally the guys," said Thompson, who is 20-14 in three seasons at The Citadel, including a 10-2 record and SoCon title in his first season in 2016.

"When you have a little bit more of a threat at quarterback and a guy who can pick up first downs, you are naturally going to have that effect on defenses."

"I'm fired up, too," he said. "We're just gonna show everybody in the league what we can do."

• In addition to its deals with ESPN3 and ESPN+, the SoCon announced an agreement with Nexstar Broadcasting to carry 13 games in 2019 throughout the league's six-state footprint.

The Citadel will be featured on the "Ingles SoCon Game of the Week" on WCBD in Charleston on Oct. 5 at home against VMI, and on Nov. 2 at ETSU. Each team in the league will appear at least twice on the game of the week.

• The Bulldogs are set to begin practice on Aug. 2, and will hold a media day on Aug. 17. Weekly news conferences are planned for Mondays during the season instead of Tuesdays.

P Matthew Campbell, So., The Citadel