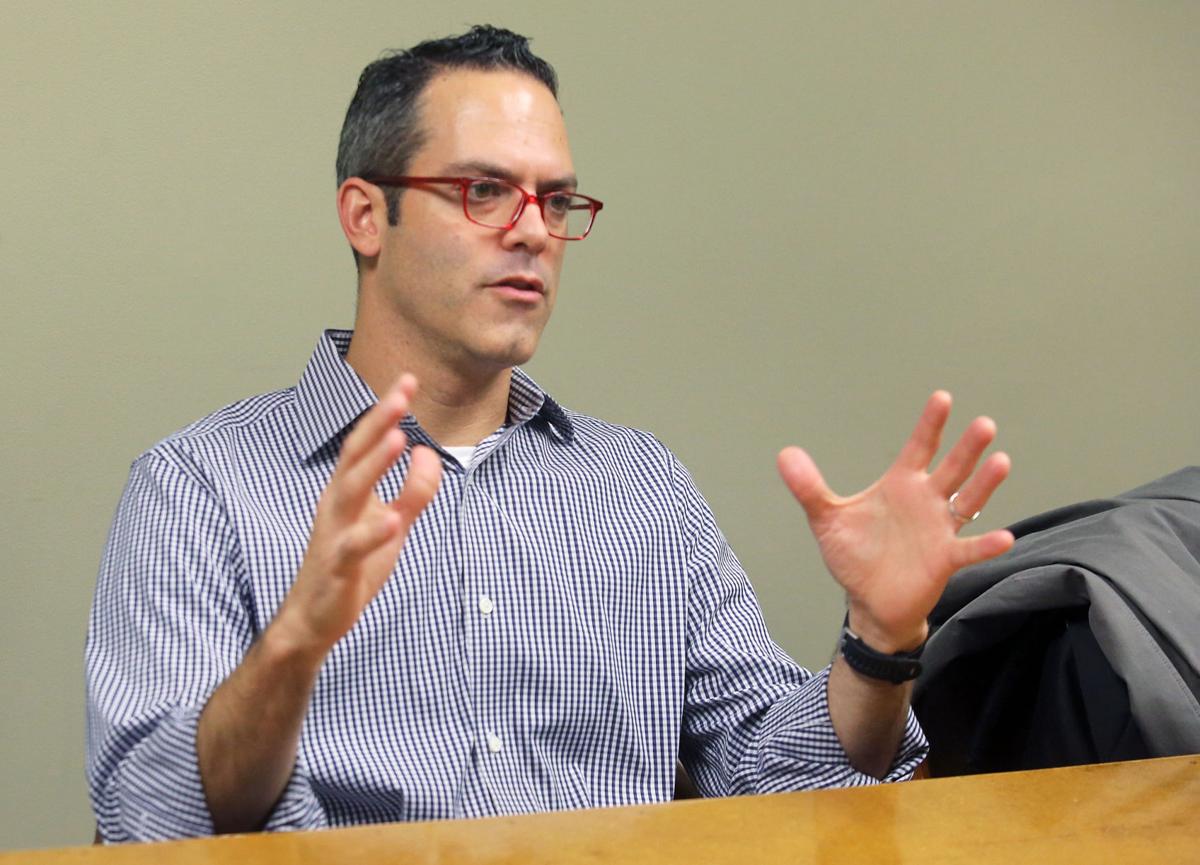 New Chareston Battery owner Rob Salvatore talks about his plans for the soccer team Wednesday at The Post and Courier. Brad Nettles/Staff 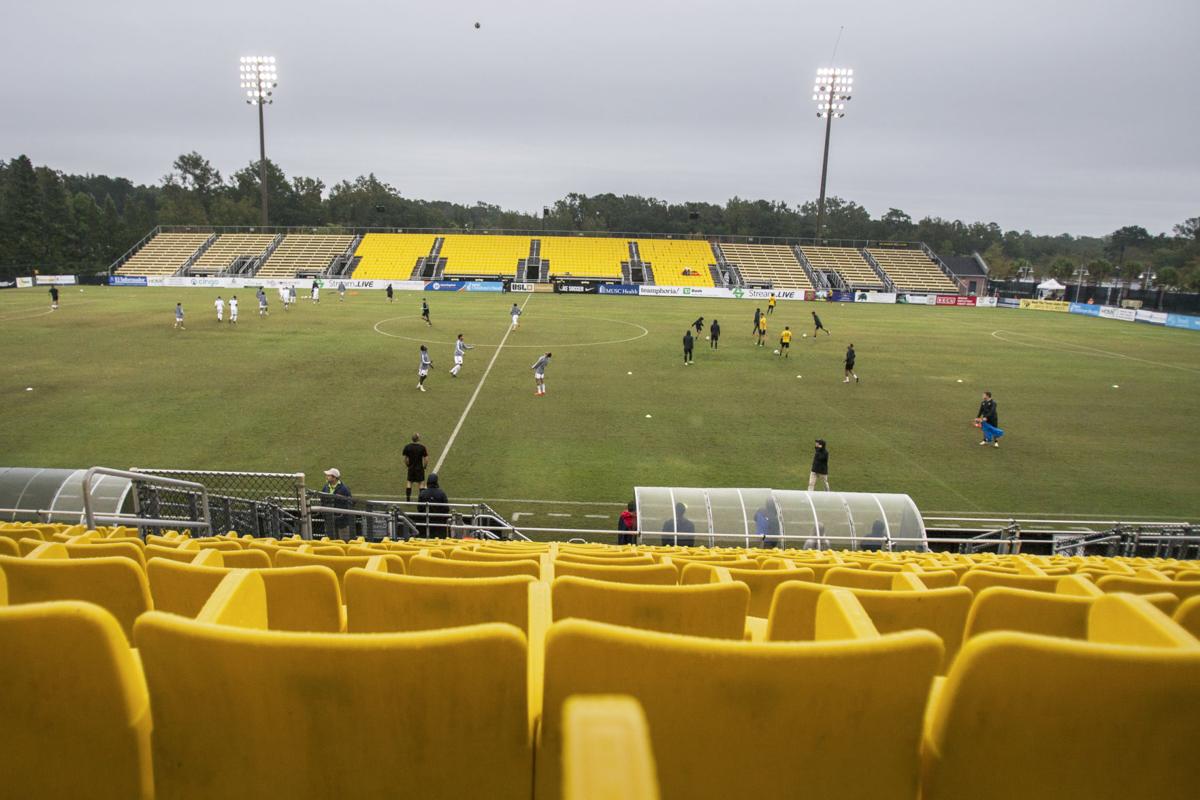 The Charleston Battery soccer team warms up before its  final game at MUSC Health Stadium on Oct. 19, 2019, on Daniel Island. Gavin McIntyre/ Staff 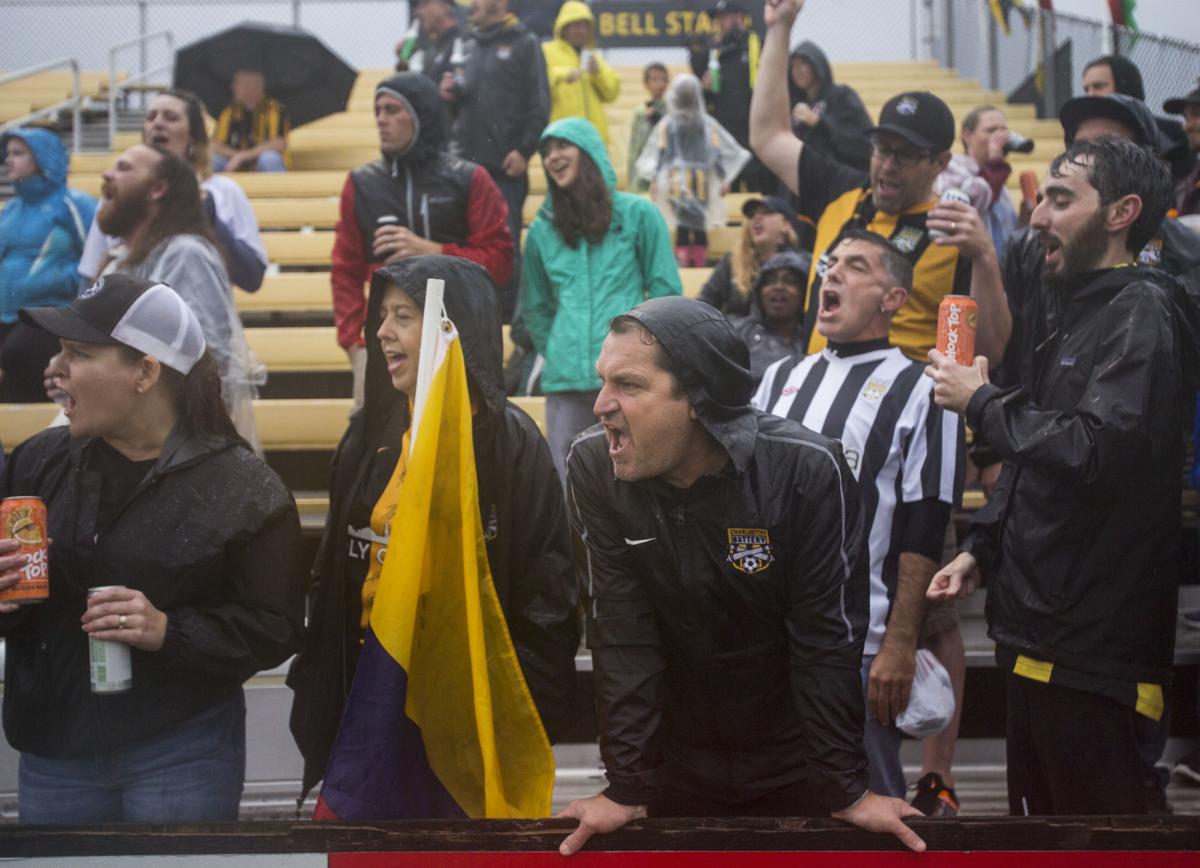 Charleston Battery fans show their support for the team in the rain during the soccer team's last game to be played at MUSC Health Stadium on Oct. 19, 2019, on Daniel Island. Gavin McIntyre/ Staff 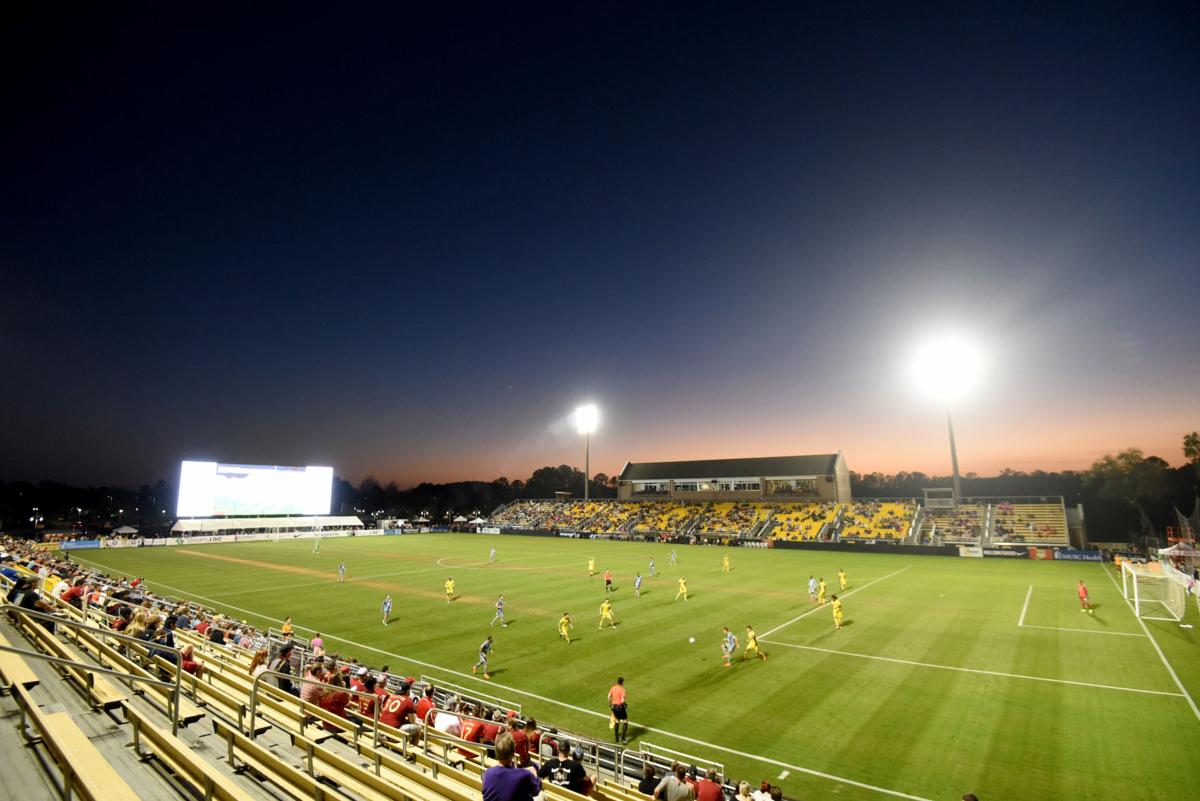 The Charleston Battery soccer team has played at MUSC Health Stadium on Daniel Island since 1999. File/Staff 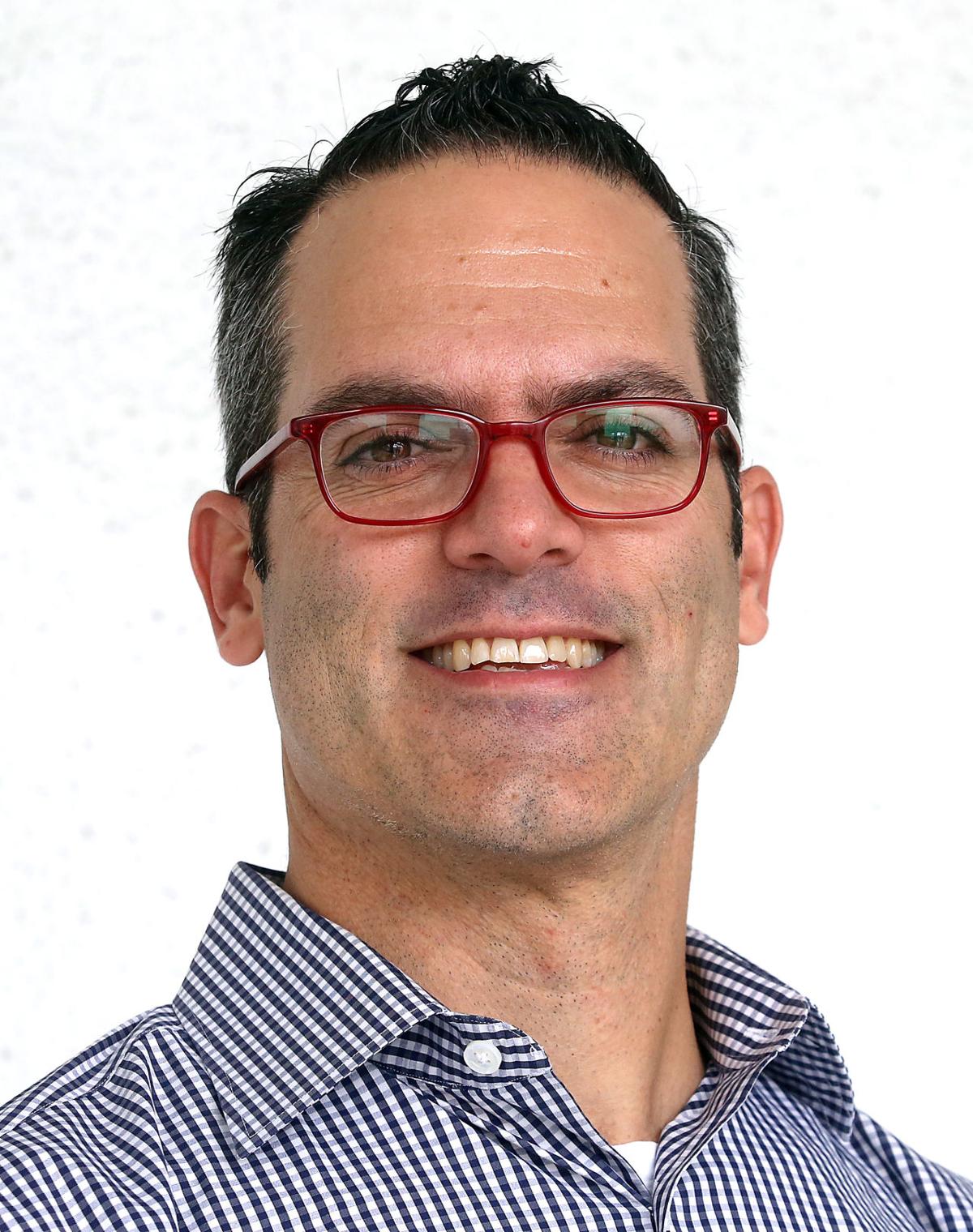 New Chareston Battery owner Rob Salvatore talks about his plans for the soccer team Wednesday at The Post and Courier. Brad Nettles/Staff

The Charleston Battery soccer team has played at MUSC Health Stadium on Daniel Island since 1999. File/Staff

After three tumultuous years under the leadership of Eric Bowman and B Sports Entertainment, the soccer club was sold Wednesday to a group called HCFC and led by New York native Rob Salvatore.

Salvatore becomes the third owner of the oldest continuously running professional soccer club in the United States, which opened its doors in the spring of 1993, playing its home matches in downtown Charleston at Burke High School's Stoney Field.

In 1999 the club moved to Daniel Island and into Blackbaud Stadium – the first privately owned soccer-specific stadium in the U.S. – and over the next two decades built a national brand that allowed it to bring in  the U.S. Women’s National Team and MLS teams, along with international clubs from Europe, Mexico and the Caribbean for exhibition matches.

“The Battery are an indelible part of the Charleston community,” Salvatore said. “As one of the most historic professional soccer organizations in the United States, this club has brought people throughout the Lowcountry together for decades. As the custodians of the club, we will honor and respect that history while bringing new energy, experience and resources to grow the club’s connection to the community both on and off the field.”

“We are absolutely thrilled to welcome Rob to the USL,” said league president Jake Edwards, who played for the Battery. “As someone who has had the privilege of playing for the club, I know first-hand how wonderful the Charleston community is and how important they are to the future of the USL Championship. Under Rob’s leadership, we believe the future of professional soccer in Charleston is incredibly bright.”

Salvatore met for the first time with the club’s front office, coaching staff and players Wednesday afternoon. Salvatore said no decisions have been made about head coach Mike Anhaeuser, who has won more than 200 games, led the club to two USL titles and been with the team as a player and coach since 1994.

“I haven’t even had a chance to talk with Mike or the staff,” Salvatore said early Wednesday afternoon. “He’s obviously done a great job over the years, and his record speaks for itself.”

Last week, the Battery finalized an agreement to play its 2020 season at College of Charleston's Ralph Lundy Field at Patriots Point. The Battery is working on extending the contract with the college to play all of its home games through 2022 at the Mount Pleasant facility.

"This partnership with the Charleston Battery is a win-win for everyone,” said College of Charleston athletics director Matt Roberts. “It will not only enhance our coaches’ and student-athletes’ overall experience by exposing them to a professional team and a professional environment, but it will be a boon for our greater community and give fans an even greater opportunity to see and cheer on top-level soccer."

Bowman sold MUSC Health Stadium on Daniel Island – the club’s home for the past two decades – in May to Holder Properties for $6.4 million. Bowman, who bought the team and MUSC Health Stadium from club founder Tony Bakker for $8.4 million in 2016, had run-ins with league officials and the media throughout this tenure. At the same time, attendance for home games dropped significantly.

After selling the club's stadium on Daniel Island, Bowman said he wanted to move the team back to Stoney Field, which served as the Battery’s home from 1993-99. Stoney Field, which is used by Burke High School and the City of Charleston Recreation Department, is undergoing renovations and won't be ready for use until the fall of 2020, city officials said.

The Battery then shifted its focus to playing at Johnson Hagood Stadium, The Citadel’s 11,000-seat facility across the street from Stoney Field. However, issues with the installation of new turf on field for the 2020 Citadel football season forced the Battery to look elsewhere.

The U.S. Soccer Federation requires all USL Championship venues to have a seating capacity of at least 5,000. Under the current configuration, the Patriots Point facility seats a little more than 1,000. Salvatore said the club will work in the coming months to meet those requirements.

“We going to do everything we can to get there as quickly as possible,” Salvatore said. “We want big, loud crowds at the matches. Now, how quickly that can happen? I’m not sure. We’re dealing with so many different entities.”

Salvatore said he will lean heavily on Turner Construction, where his father is a board member. Turner Construction is currently building SoFi Stadium in Los Angeles, which will be home to the NFL’s Los Angeles Chargers and L.A. Rams. The company also did renovations at Clemson's Littlejohn Coliseum and Memorial Stadium.

“They build the biggest stadiums in the world,” Salvatore said. “We walked the site with one of our senior engineers. We have those resources and he’s going to help guide us and the league through that process. We think it’s going to be modular; it won’t feel temporary, it’ll feel permanent.

"That’s something that I’ll be involved with. We don’t need to build a 30,000-seat facility. I think we can build something that’s pretty intimate and has some pretty cool amenities in a gorgeous location. That will be our focus for the next couple of months.”

Salvatore said without the College of Charleston, the deal might not have been finalized.

“The way the College of Charleston has cooperated and partnered with us in these first few days is really exciting,” Salvatore said. “I think it’s safe to say they saved professional soccer in Charleston.”

Over the coming the months, Salvatore will embark on a series of listening sessions to receive feedback from the community and club supporters.

“The most important thing we can do this offseason is listen,” Salvatore said. “We need to make sure our ideas align with the views and beliefs of our supporters. It’s very important that we’re making decisions together. We may own the team, but it belongs to Charleston. It is paramount that we earn and keep the community’s trust. That starts by listening and being transparent.”

Salvatore spent the previous decade serving as CEO of Tongal, a venture-backed community driven creative platform that he co-founded. He left the company a year ago and said he was looking for a new challenge.

“When it became apparent that the Charleston Battery was going to be available, I got really excited,” Salvatore said. “Now that this is the next chapter in my life, I’m beyond stoked. I think this an incredible opportunity.”