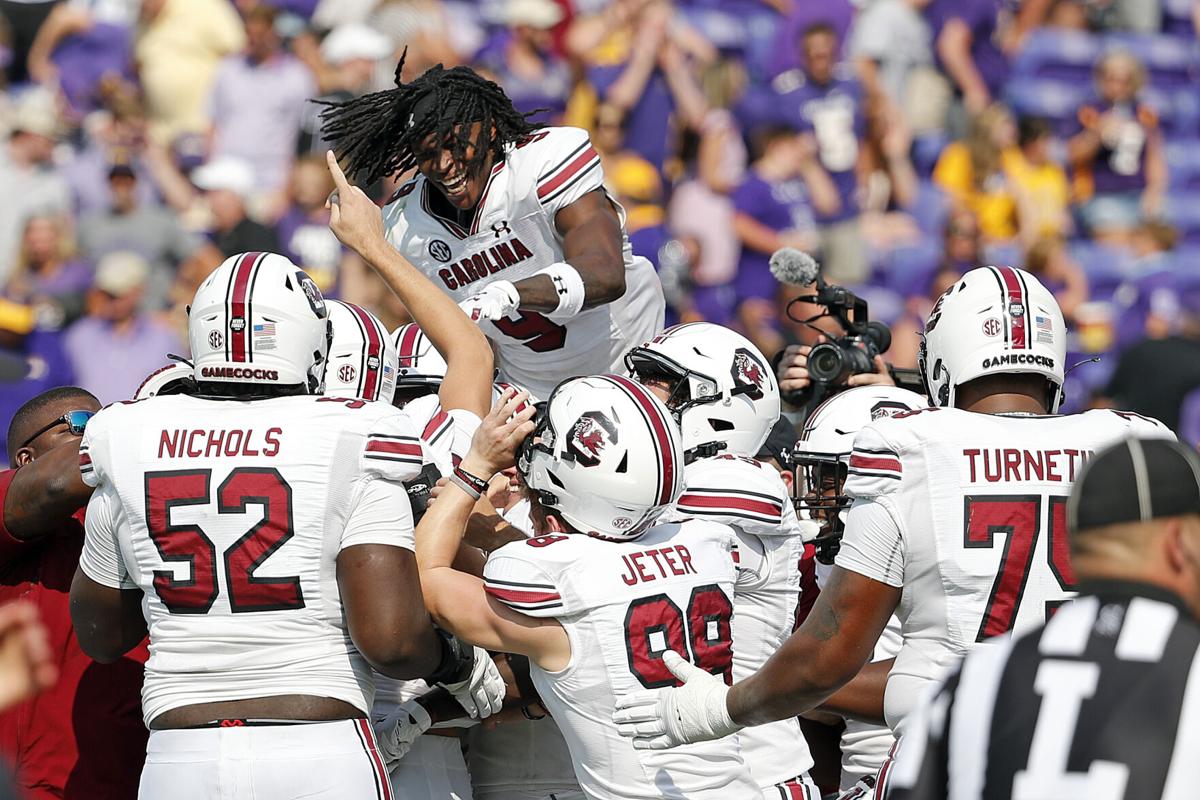 Parker White, finger raised, celebrated his game-winning field goal over East Carolina as his teammates piled on on Sept. 11. AP/Karl B. DeBlaker 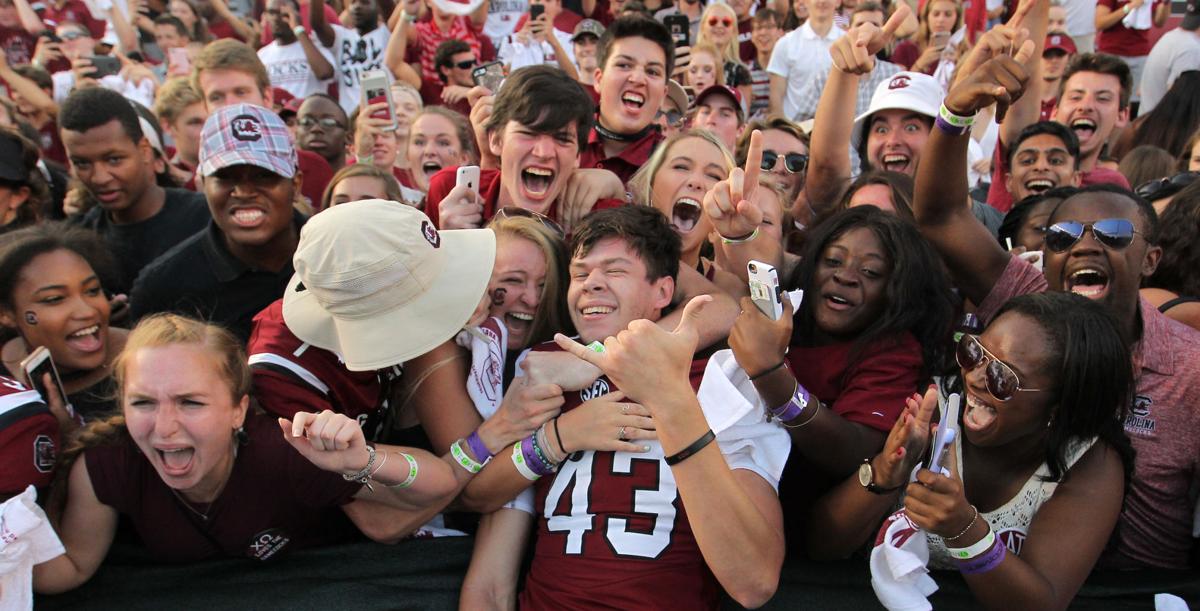 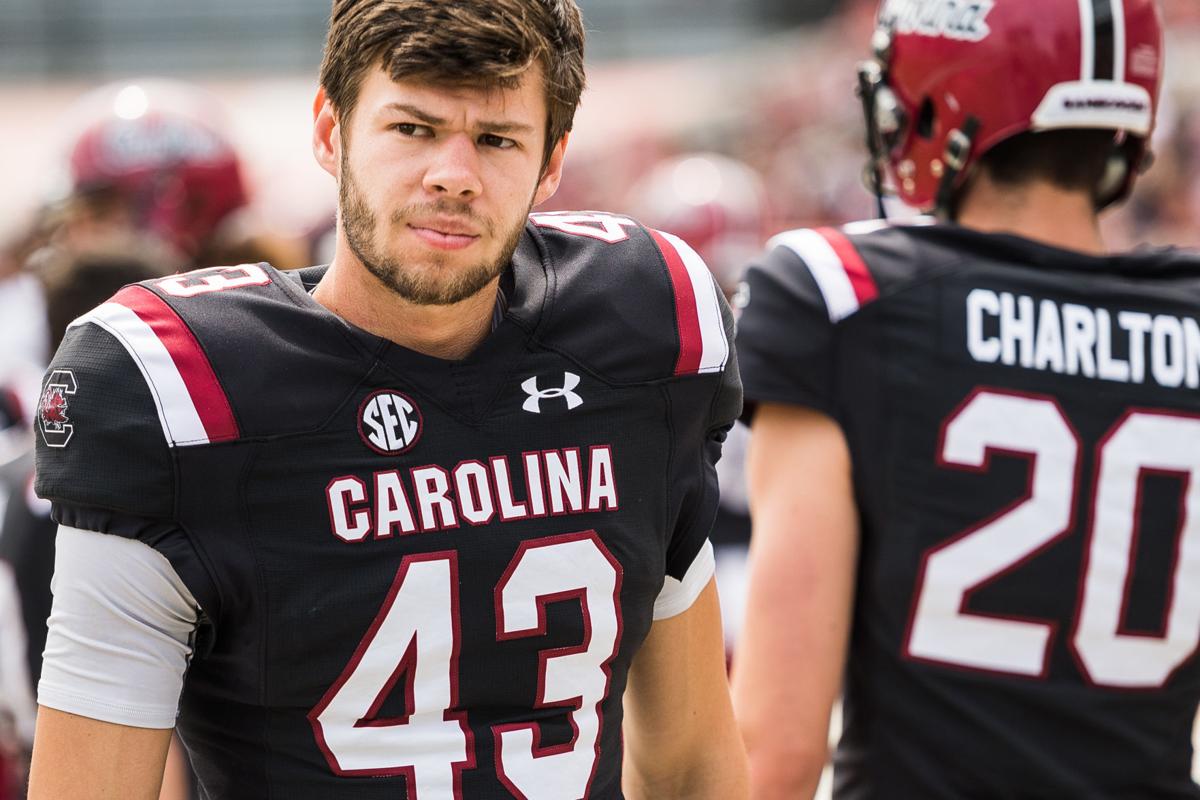 Parker White kicked another game-winner on Sept. 11 as USC defeated East Carolina. John A. Carlos II/Special to The Post and Courier

Parker White, finger raised, celebrated his game-winning field goal over East Carolina as his teammates piled on on Sept. 11. AP/Karl B. DeBlaker

Parker White kicked another game-winner on Sept. 11 as USC defeated East Carolina. John A. Carlos II/Special to The Post and Courier

Parker White wasn’t part of the majority of the foolishness, silliness and menagerie of madcap that dominated the game, but he supplied the ending. For the sixth time in his five-year career, White stood on the field with a chance to supply the game-winning points.

For the sixth time in his five-year career, he delivered. He bowed at midfield after his 36-yarder sailed through the uprights to clinch a 20-17 USC win that was nuttier than pecan pie.

The Pirates (0-2) scored on the first play of the game, a 75-yard touchdown thrown by a receiver. The Gamecocks fumbled three times, losing one, and tossed an interception. USC (2-0) had one touchdown negated on a bobbled catch and another one taken away when Josh Vann fumbled at the goal line, the ball trickling through the end zone.

ECU was gifted a touchdown when the officials ruled Dakereon Joyner fumbled, when replays showed at least three parts of him on the ground holding the ball. Linebacker Damani Staley, the son of legendary USC running back Duce Staley, won’t beat his dad in any footraces, but his 63-yard interception return scored the Gamecocks’ first touchdown.

But the Gamecocks won. They won. On a day that for three quarters, a win seemed as far away as those hallowed days of 2010-13, when a team Beamer helped build won 42 games.

“I just told the team in the locker room, ‘I don’t think I’ve ever been more proud of a team than I am right now,’” a drained Beamer said. “To withstand everything we withstood, finding a way to win that game in the fourth quarter … that is a helluva happy locker room in there right now, and rightfully so.”

The defense was outstanding. ECU led 14-0, but its two touchdown “drives” encompassed three plays, one the trick-play score on the game’s first play and the other set up by the questionable Joyner fumble.

The defense allowed 268 yards, recorded five sacks among nine tackles for loss and posted its second straight game with a defensive touchdown. Cornerback Cam Smith played a marvelous game with six tackles and four pass breakups, although some of his head-hunting and boisterous trash-talking led to trouble the Gamecocks didn’t need.

After halftime, USC committed to the running game, although the Gamecocks had minus-15 rushing yards (including sacks) to that point. Kevin Harris had seven carries for 33 yards in his season debut, MarShawn Lloyd had 7-21, ZaQuandre White had 5-8 and freshman Juju McDowell had 11-71.

McDowell carried seven times for 46 yards on the final drive, including gains of 15 and 16 yards. He also set up White’s game-tying field goal in the fourth quarter with a 63-yard kickoff return.

Vann caught five passes for 116 yards and should have had two touchdowns.

Staley has played in 40 games over five years now and never had a bigger play than that.

And White, who now stands 56 points away from USC’s career scoring record? He doesn’t miss the important ones.

“You’re overcome with so much emotion, you don’t really plan the celebration out before,” White said of the bow. “I was confident the line was going to do their job, I was going to have a great snap and hold.”

The Gamecocks’ offense was abysmal in the first half. It seemed as if when the run didn’t work early, offensive coordinator Marcus Satterfield abandoned it.

That could have been fine with a quarterback who can throw downfield, but Zeb Noland couldn’t, Luke Doty still isn’t 100 percent and in any case, the Gamecocks’ receivers aren’t trusted right now.

The Gamecocks aren’t using the schemes that were used to so much rushing success last year, and it shows. The offensive line often seems mired in its tracks as the running backs search for gaps.

Vann was hit at the goal line and fumbled. Another TD was wiped because it was judged he bobbled the ball in the end zone before going out of bounds.

USC had eight penalties for 55 yards. Some were just slap-your-forehead stupid.

“We talked about being more disciplined, keeping our composure, not having dumb post-whistle penalties like we did,” Beamer said. “Obviously, I did a crap job of coaching it. Bad football, man.”

After Vann’s game-tying touchdown in the third was reversed, Noland stood in three plays later and fired high over the middle, aiming to get over a linebacker to his receiver. It looked destined to wind up in the seats.

Joyner leaped and pulled it down, the largest of his five catches on the day.