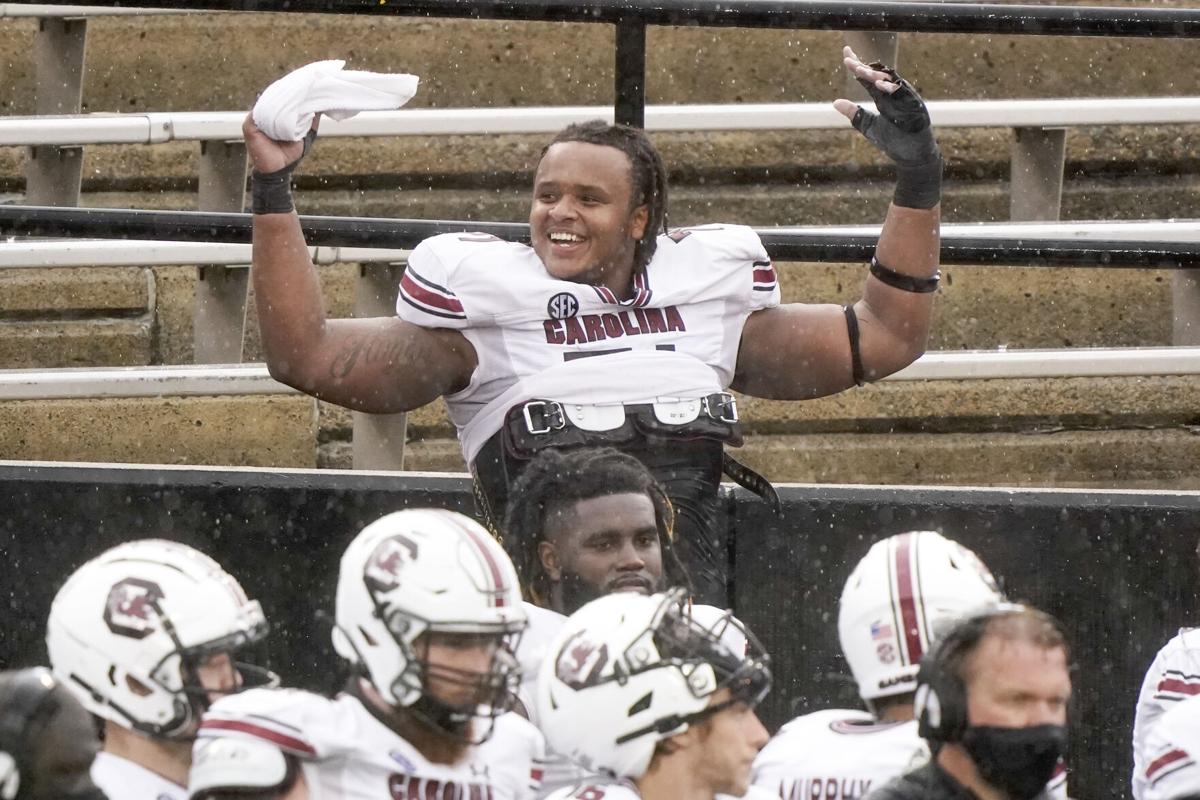 Eric Douglas and the Gamecocks are coming off their first win of the season. Mark Humphrey/AP

Eric Douglas and the Gamecocks are coming off their first win of the season. Mark Humphrey/AP

COLUMBIA — Two SEC games scheduled for this weekend are postponed. Ole Miss is dealing with an outbreak of COVID-19 that could lead to a third. Alabama coach Nick Saban and athletics director Greg Byrne have both tested positive.

South Carolina remains mostly untouched by the pandemic, but the worry is constant.

“Every time my phone clicks on a text from (trainer) Clint Haggard or a phone call, I hold my breath. Could be a member of my staff, could be me, could be a player,” USC coach Will Muschamp said. “We’re all dealing with the situation that we’re in and making the best from it. But it is very nerve-wracking as far as dealing with things that are totally out of your control.”

Muschamp has ceased discussing injuries or COVID numbers with reporters, although he did mention that “so-and-so” was downgraded to out on the Friday before last week’s Vanderbilt game. For the Gamecocks' home game Saturday against No. 15 Auburn, everything seems to be shipshape.

That's not the case for other SEC teams. The Vandy-Missouri game and Florida-LSU game have been postponed because of virus related issues. After playing at Vanderbilt and Florida over the past two weeks, is there cause for concern at USC?

No more than normal.

Muschamp, Haggard and the rest of his support staff tweaked their game-week protocols before the season and thus far those changes have paid off. It’s a home game this week, so there’s no air travel involved, but an increased number of buses (to accommodate social distancing) will ferry the Gamecocks from their Friday hotel to Williams-Brice Stadium on Saturday.

Muschamp chose to stick to the usual plan of sequestering players in a hotel the night before a home game, although the particulars changed. On the road or at home, only USC’s nutrition staff handles and prepares the food while the coaches and trainers help distribute it.

“(Director of operations) George Wynn took the ice cream Friday,” chuckled Muschamp, no stranger to serving food after surprising his players with catered Waffle House a few years ago. “We just tried to help out moving things around and pitch in, try to make it easier for our players.”

When the team thinks they have a tough workout ... but @CoachWMuschamp has a surprise instead! 😂 pic.twitter.com/ZG8lpMuMtV

The hotel sanitizes the rooms and common areas, making sure the other guests don’t walk into the same spaces as the team, and USC separates the Gamecocks if they’ve had a positive test before. Normally hotel roommates are divided by position group, but now it may be separated depending on on-campus roommates.

“We got more guys, depending on if they’ve had COVID or not, having their own room so we could eliminate an issue there as far as a roommate is concerned,” Muschamp said.

Normally there’s a movie or team activity after film study, depending on kickoff the next day. The pandemic has changed those plans, as well, although masks and social distancing still rule.

“Once you watch the film, you got to be dialed in,” center Eric Douglas said. “I like to go in some of the running backs’ rooms, go into the quarterbacks’ rooms … I was just playing Call of Duty with Ryan (Hilinski) the other day. Being with the guys, not be cooped up by yourself.”

Next week’s game at LSU will feature travel restrictions similar to those for the games at Florida and Vandy. The Gamecocks chartered a 170-seat plane and filled two-thirds of it on each trip.

The chance of contracting the virus is always there, but the Gamecocks’ have avoided outbreaks thus far. They’ll pivot if they have to. And advise the rest of the SEC if that becomes necessary.