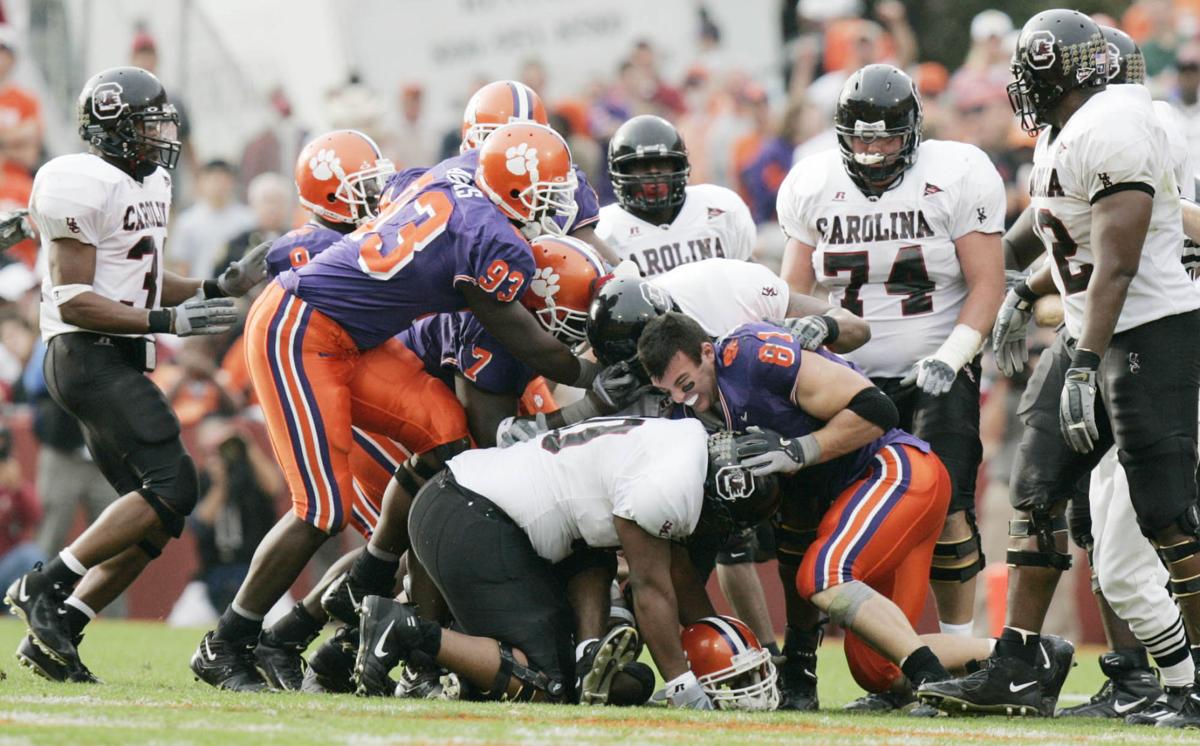 Clemson and South Carolina players scuffle in the infamous 2004 brawl during the Tigers’ victory at Death Valley. File/Staff 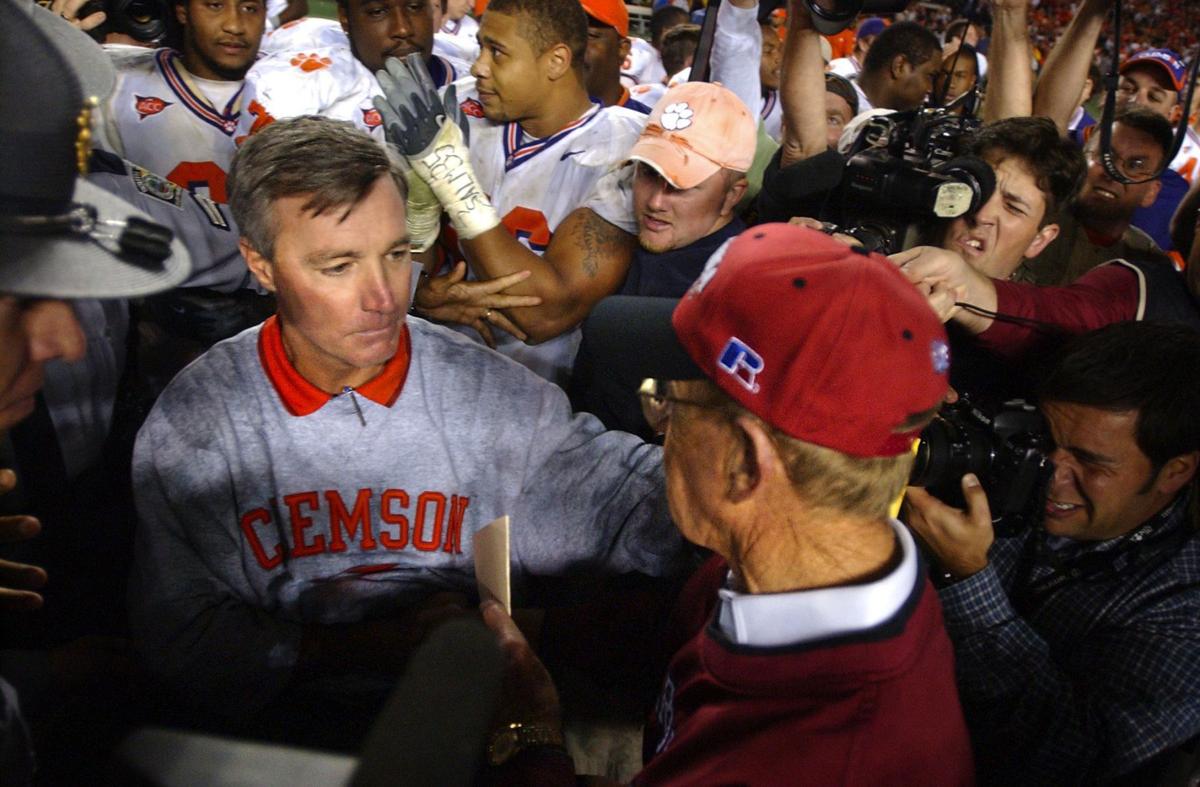 Tommy Bowden (left) and Lou Holtz were the coaches for the most infamous moment in USC-Clemson football history. File/Staff 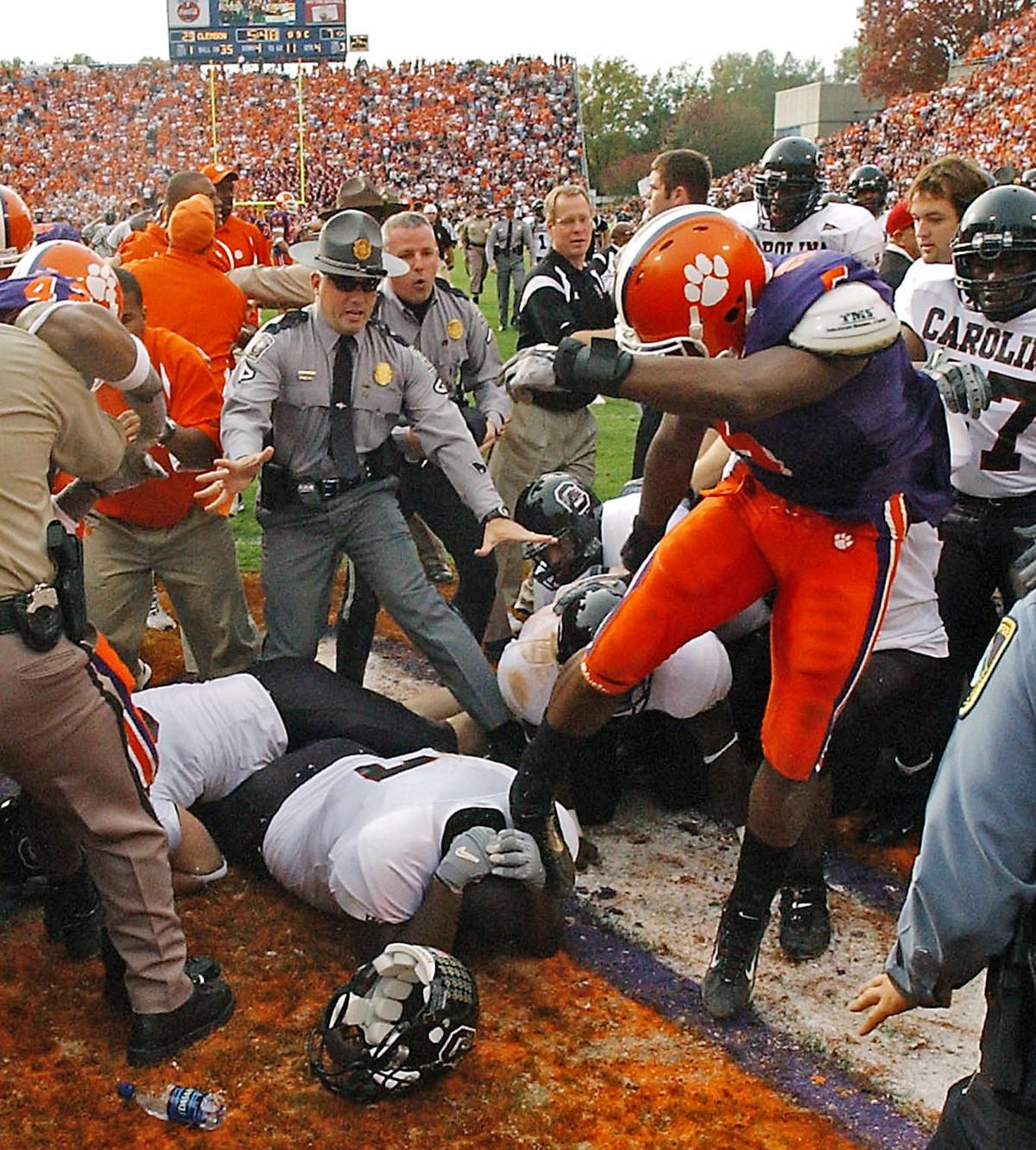 Clemson running back Yusef Kelly kicks South Carolina defensive lineman Charles Silas in the head during a fourth-quarter brawl late in a 2004 football game marred by The Brawl at Clemson. Ken Ruinard/Anderson Independent-Mail/AP

Clemson and South Carolina players scuffle in the infamous 2004 brawl during the Tigers’ victory at Death Valley. File/Staff

Clemson running back Yusef Kelly kicks South Carolina defensive lineman Charles Silas in the head during a fourth-quarter brawl late in a 2004 football game marred by The Brawl at Clemson. Ken Ruinard/Anderson Independent-Mail/AP

COLUMBIA — Everybody remembers it, although nobody likes to remember it. Both sides of the South Carolina-Clemson rivalry think theirs is the best in the country, and the 2004 installment was the ultimate black eye to that reputation.

It’s exactly why Lowcountry natives and Gamecock football alums Langston Moore and Preston Thorne wanted to talk about it. Not just the fight that marred the ending of a convincing Clemson win, one that cost both teams a bowl game and sent USC coach Lou Holtz out on a terrible note, but everything that went into it, before, during and after.

“The Fight” is a seven-episode podcast that will post its first two episodes on Thanksgiving, just the fodder for a big meal leading into another rivalry game. Moore and Thorne draw from 18 months’ worth of interviews in presenting every angle of what happened that day.

“It kind of started because Preston and I have been on the road the last two to three years promoting our books,” said Moore, referring to his successful “Just a Chicken” children’s series. “In the car, we’d be listening to podcasts. So Preston was on that team, he was a captain, and that was his final game. We started talking about what he remembers from that game, and that was the genesis."

The Fight: A seven part podcast on the real lives and true stories behind the "the brawl to end them all." Fifteen years ago this week #ClemsonTigers and #CarolinaGamecocks duked it out at the bottom the hill. https://t.co/xKZOefJHd4 pic.twitter.com/idR8GosLRO

Why start with an event that was pivotal in the rivalry (Holtz had decided to retire that season, and Steve Spurrier had already been lined up as his replacement) but one that shamed everyone who participated?

“That’s why,” Moore said. “To separate fact from fiction, giving each side of it. Players are usually going to be left holding the bag but there were plenty of others involved.”

The first four episodes deal with the sequence of the USC-Clemson rivalry, and what went into the 2000-03 games to fuel the events of 2004. Holtz told the players of his decision after they achieved bowl eligibility, and there were mixed feelings among the team but all wanted to send him out with a win.

Then came the spark. The night before the game, the Detroit Pistons and Indiana Pacers threw down in one of the most despicable moments in NBA history. “The Malice at the Palace” was ESPN fodder for 24 hours, and USC players cooped in their hotel rooms didn’t have much else to do but watch it.

Moore, a James Island High School graduate, and Thorne, a Summerville High graduate, delve into the characters on each side, then discuss the brawl in Episode 5. The final two episodes are on the fallout and how each team got to their present state.

Thorne, who was on the field that day, found out things that even he didn’t know.

“We never get a chance to really remember and find out what happened,” Thorne said. “Like, Daccus Turman, at that time, he was getting ready to quit the team. But he came back and played for coach Spurrier the next year. (Clemson wide receiver) Airese Currie, that week, his daughter had just been born.”

Moore estimates they talked to between 35 to 45 players, administrators, police and even equipment managers. They tracked down one of the most memorable faces of the game, Clemson’s Yusef Kelly, who was pictured kicking the helmetless head of USC’s Woodly Telfort.

The podcast will be revealed on the two’s Athletes and Artists SoundCloud channel. When relaxing with Thanksgiving leftovers, perhaps the first two episodes of “The Fight” will be just the spice needed to complete the meal.

The face of 'The Brawl'

EASLEY - As Yusef Kelly pulls the squad car out of the Easley Police Department parking lot, past an adjacent graveyard, across railroad track…

South Carolina-Clemson 1986: The rivalry game nobody won, and nobody lost

In 1986, South Carolina and Clemson played 60 minutes and left the game the same way as they came in.

Clemson or Carolina? For newcomers to SC, the choice can be fluid

Newcomers to the state of South Carolina find out right away that everyone is expected to choose between Clemson and USC when it comes to football.

Four keys for South Carolina to pull off the shock of the century.