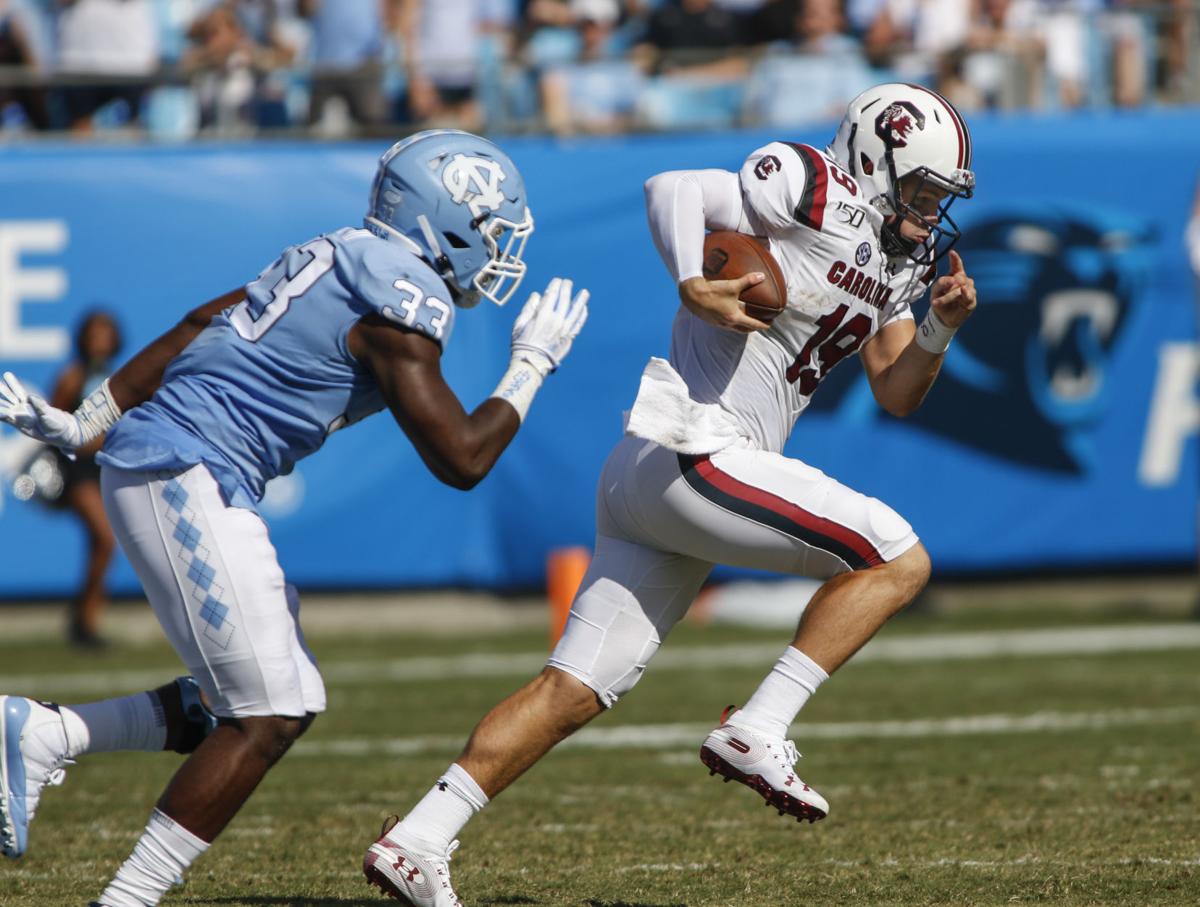 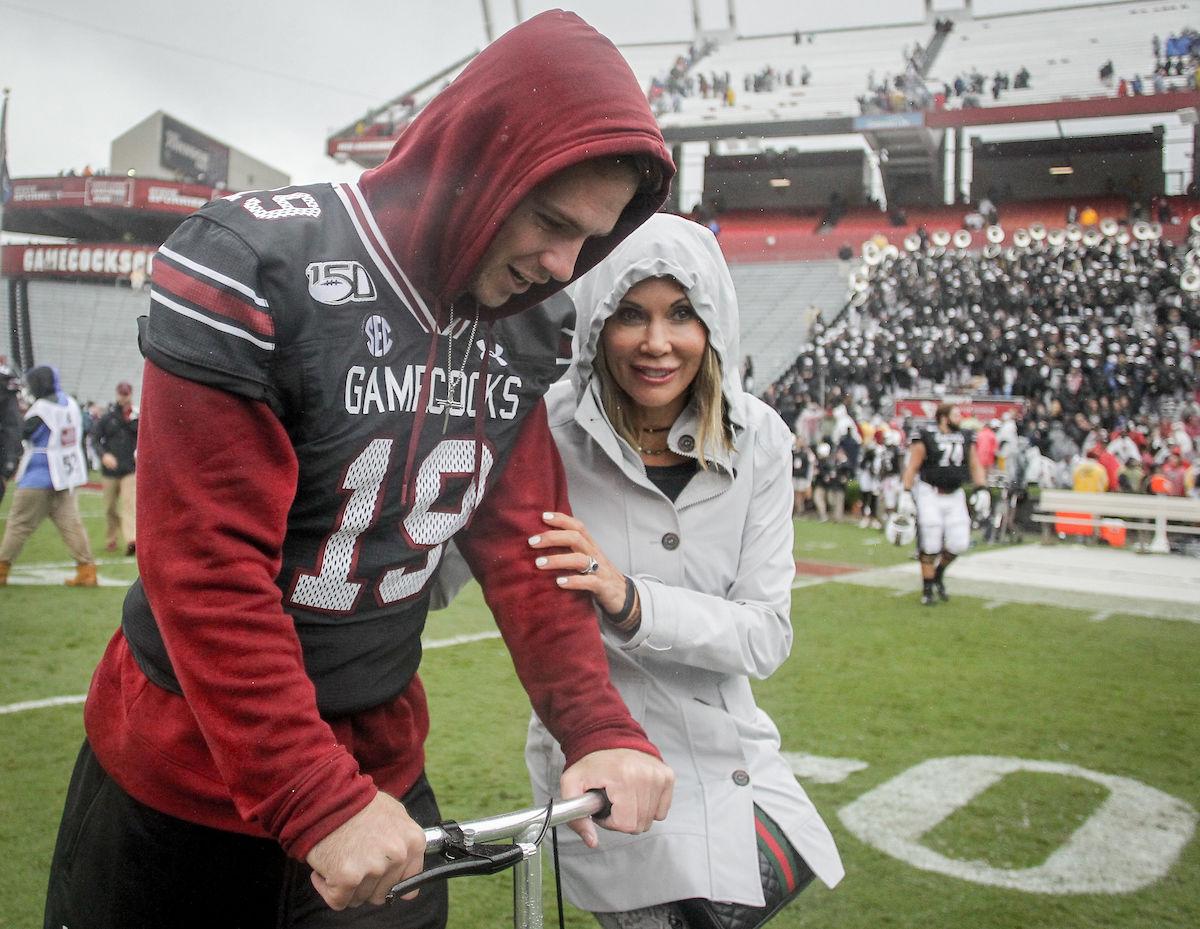 Will Muschamp's wife, Carol, has a word of encouragement for Jake Bentley following the Florida game in Columbia on Oct. 19. (Travis Bell/Sideline Carolina) 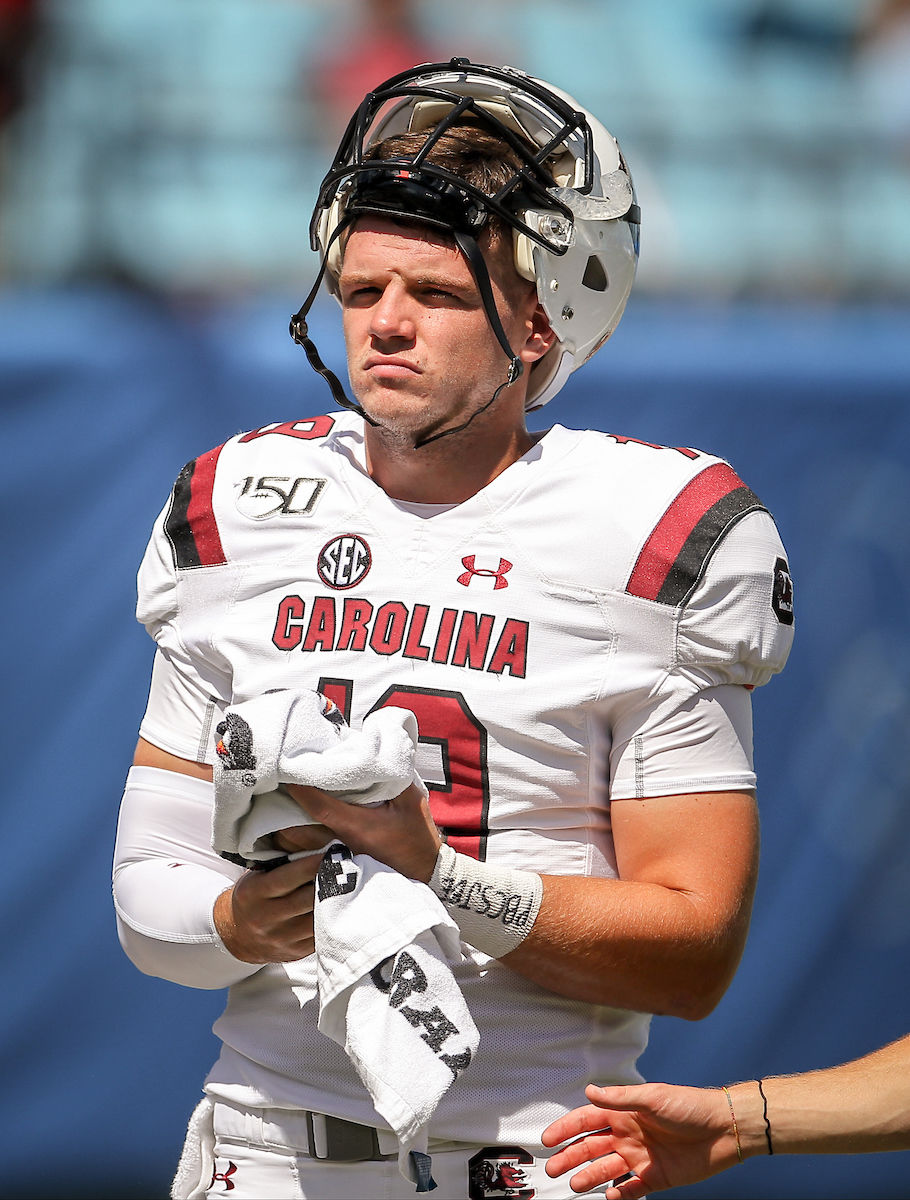 South Carolina quarterback Jake Bentley on the sideline prior to the start of the Gamecocks' season-opener against North Carolina in Charlotte. He was injured in the game and hasn't played since. Travis Bell/Sideline Carolina. 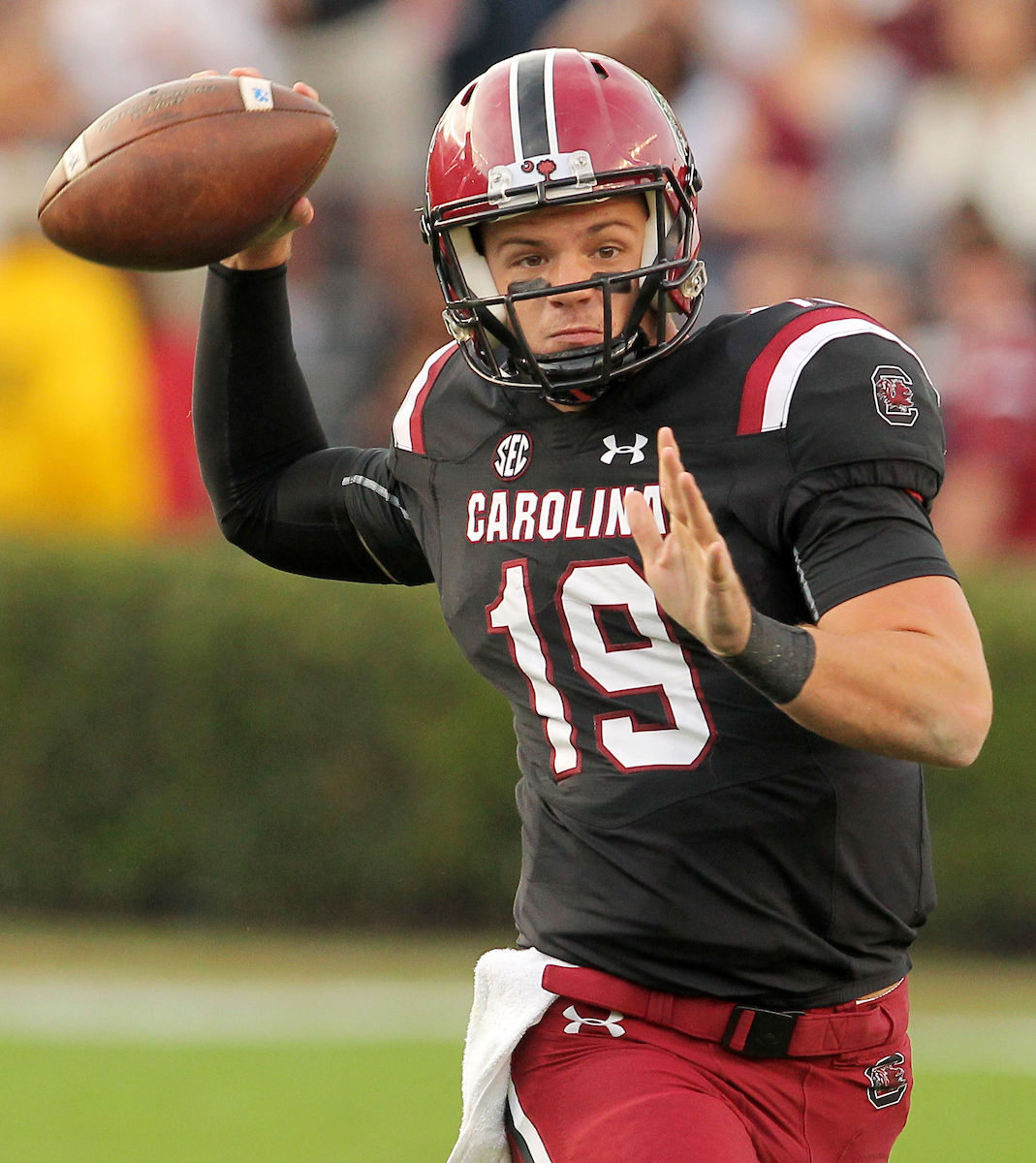 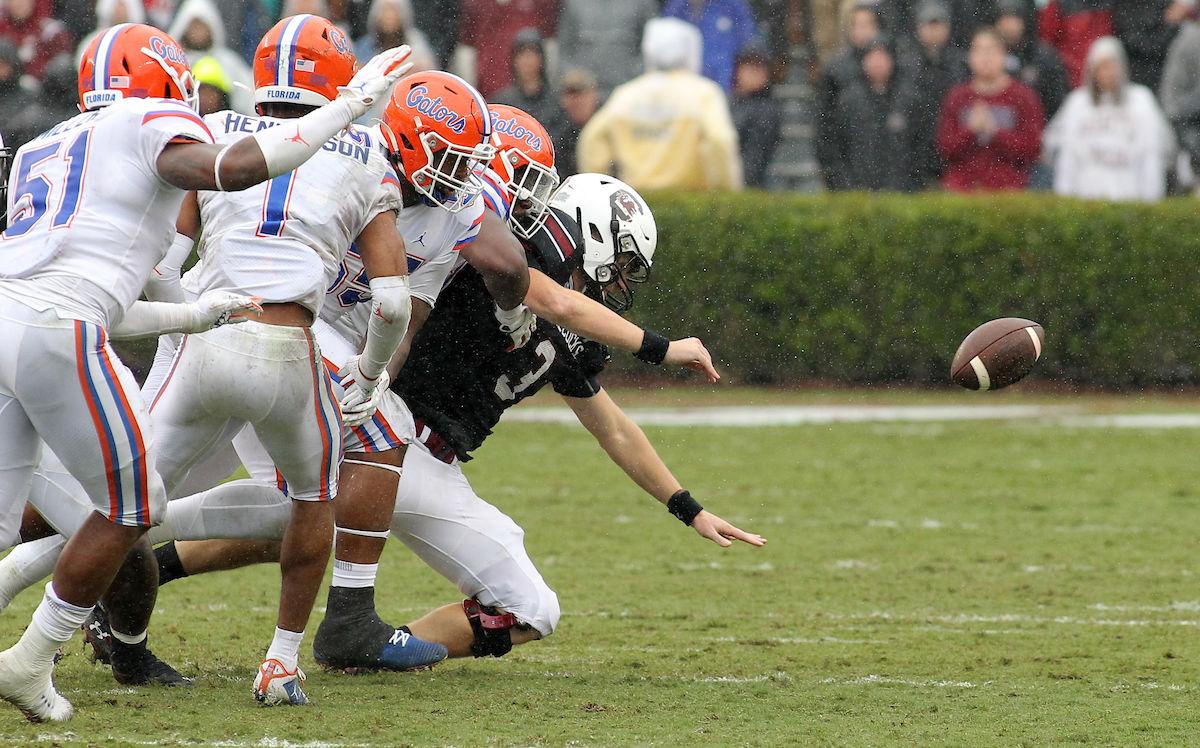 Will Muschamp's wife, Carol, has a word of encouragement for Jake Bentley following the Florida game in Columbia on Oct. 19. (Travis Bell/Sideline Carolina)

South Carolina quarterback Jake Bentley on the sideline prior to the start of the Gamecocks' season-opener against North Carolina in Charlotte. He was injured in the game and hasn't played since. Travis Bell/Sideline Carolina.

It ended with South Carolina coming up just short in a last-minute drive against a recently ranked team that had a real shot at the Cotton Bowl.

Who would have guessed it a few months ago?

There were way more Gamecock fans in the stands cheering injured senior Jake Bentley during the family ceremony than encouraging freshman Ryan Hilinski during the rally attempt.

And many of the people left in a half-empty Williams-Brice Stadium were Appalachian State fans clinging preciously to a 20-15 victory.

Gamecocks' running game needs major repairs, but may not have the tools

Hilinski has the potential to become a winning SEC quarterback.

But Bentley’s send-off — if that’s what it was Saturday night — was bittersweet. Many fans were glad Hilinski was taking over when Bentley was lost for the season with a foot injury following the season-opening loss to North Carolina.

Now the Gamecocks are 4-6 with games left at Texas A&M and against Clemson, and head coach Will Muschamp on Tuesday was fielding job-status questions.

Which begs the question: What’s the won-loss record had Bentley been healthy all season?

Good enough to have South Carolina already eligible for a bowl game.

This is not a knock on a freshman quarterback just months removed from the high school prom.

It’s hard to learn on the fly in the SEC when the blitzes are coming and the offense is puzzlingly inconsistent. Hilinski has done some good things, like leading the Gamecocks to an early lead at Georgia before leaving with an injury, and going five games between Missouri and Appalachian State without throwing an interception.

But the Bentley question is important because it’s surely one of Muschamp’s primary excuses for a bad season when he meets in a few weeks with athletic director Ray Tanner (and probably new school president Bob Caslen).

Bentley entered the season with a 19-13 record as a starter. While he struggled mightily in the North Carolina loss, he had a clear record of gradual improvement.

South Carolina’s three most painful losses: 34-14 at Missouri (in which two Hilinski turnovers cost 14 points), 41-21 at Tennessee and the Appalachian State debacle.

Hilinski didn’t have much help.

The Gamecocks’ running game was absent at Missouri (24 carries for 16 yards) and against Appalachian State (27 carries for 21 yards). South Carolina led at halftime in Knoxville before the cave-in.

Bentley has played on the road in the SEC and at Clemson.

As the great social philosopher Meatloaf once screamed, “two out of three ain’t bad.”

Muschamp, asked Tuesday to explain himself to disgruntled fans, mentioned that his South Carolina record over three seasons trumps that of previous coaches.

Lou Holtz in his fourth season already had a pair of New Year’s Day bowl victories over Ohio State (though things were starting to slip).

Steve Spurrier in Year 4 went 7-6 and made the Outback Bowl (things were on the rise).

At best for Muschamp, that’s going to require coaching staff changes and likely a contract renegotiation that reduces the amount of his buyout from the current $18.75 million to something below $14 million even with a one-year extension necessary to sell recruits.

It could have been easier with Bentley.

“Certainly with Jake it’s been very special to me personally,” Muschamp said when asked about the interaction with Bentley on Senior Night. “The contributions he’s made to this program, the success that he’s had as a quarterback here at the University of South Carolina. …

He died at age 15, but lives on through his sports foundation and 'miracle' brother

Muschamp repeated that he wants Bentley back as a fifth-year senior in 2020, and that a formal discussion will come in December.

But adding to the strange Irony Bowl scenes at the start and finish against Appalachian State are Bentley’s options for a path out of town.

He could have another Senior Night next November.

But why would the quarterback who might have turned South Carolina’s 2019 into his fourth straight bowl season want to return in 2020 when he is likely to find a better program with a better welcome?

South Carolina's offense has stagnated with no true playmaker.