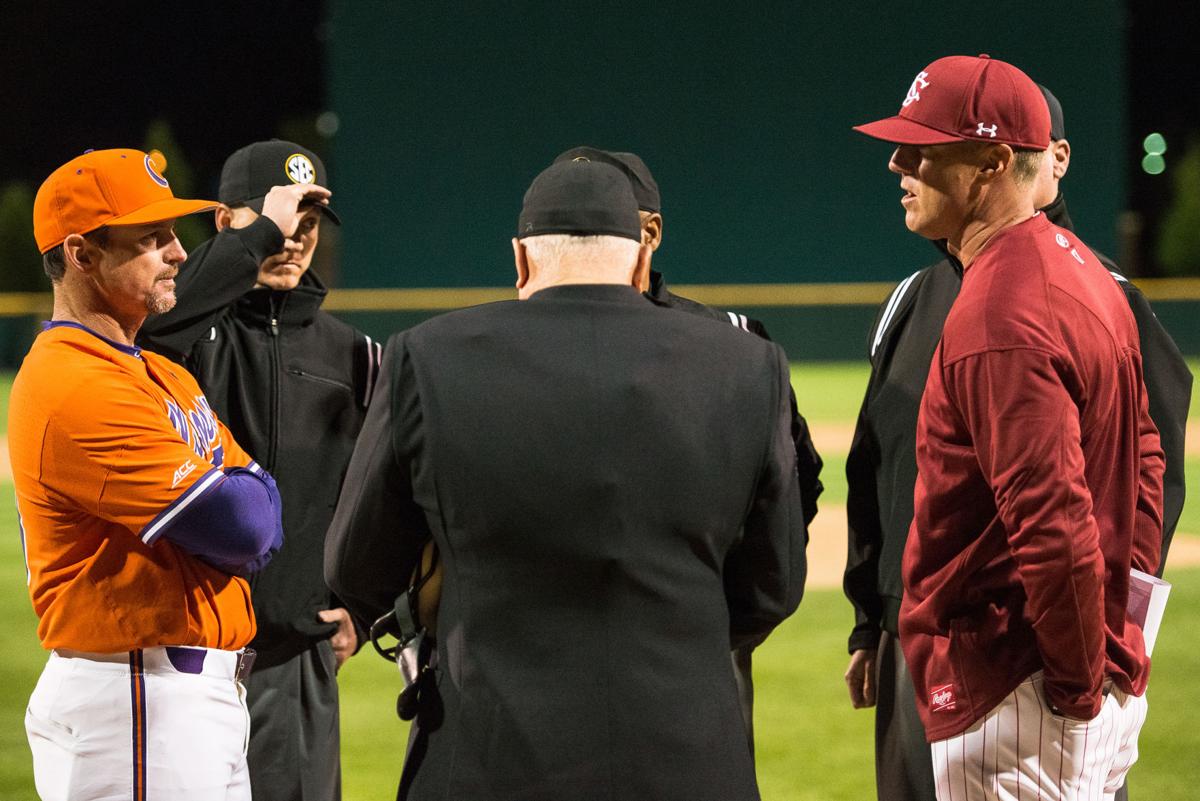 South Carolina baseball coach Mark Kingston (right) and Clemson coach Monte Lee will meet for the third time this season on May 11 at Doug Kingsmore Stadium. John A. Carlos II/Special to The Post and Courier 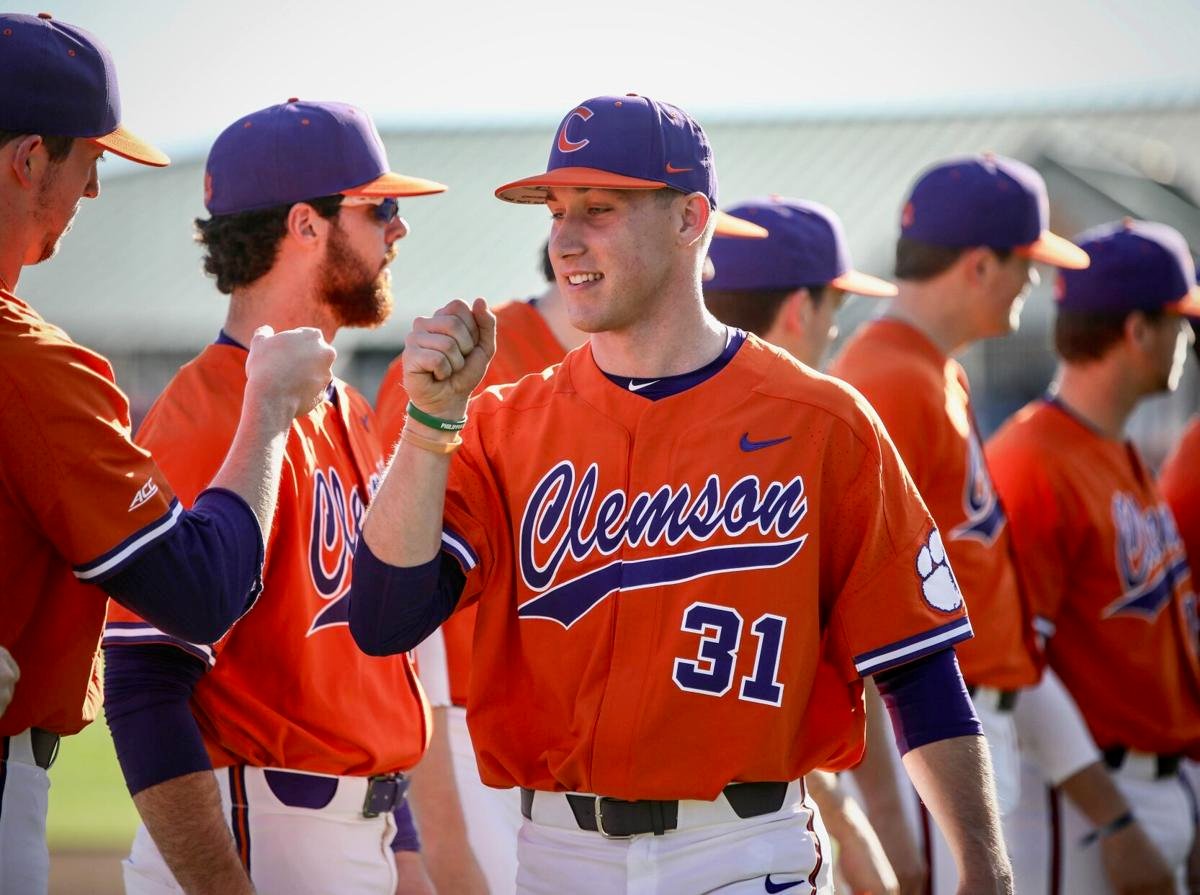 Geoffrey Gilbert (31), a Bishop England High School graduate, has a 1.66 earned run average for Clemson going into a May 11 game vs. South Carolina. Melina Alberti/Clemson Athletics/Provided

It’s what you want from a college baseball team, aggressive play to a fault instead of anything resembling the unacceptable opposite.

The flipside is frustration that comes from running yourself out of a potentially game-changing, momentum-altering inning.

That was the case May 9 as freshman Blake Wright was thrown out trying to stretch a Sunday single into a dugout-jolting double. It was the biggest play in Georgia Tech’s ACC sweep of Clemson as the Tigers’ NCAA Tournament hopes took a beating on The Flats.

South Carolina had its share of heartache while losing a May 7-9 home series to Mississippi State, the Gamecocks’ third straight SEC series loss.

Gamecocks will give Clemson baseball game 'its just due'

The answer is easier than picking between Krispy Kreme and Spam.

The team at 51 — down from 41 a few days ago — in the official NCAA Ratings Percentage Index.

The guys who are 3-9 in one-run ballgames this season.

South Carolina, No. 12 in the RPI, will make the NCAA Tournament. Whether or not the Gamecocks host a regional, they have made clear and exciting progress in Mark Kingston’s fourth year as head coach.

Gamecocks walk off Mississippi State to salvage one win in series

This after the Tigers squeezed into the 2019 tournament as a No. 3 seed in Oxford.

Lee praised “toughness, fight and grit” as Louisville was swept for the first time ever in an ACC series in Clemson’s most recent home series. The Tigers will need every bit of that vs. South Carolina, and help from a limited crowd of 2,119 because of COVID-19.

More so in a tight game, like Clemson’s pair of one-run losses to the Gamecocks in February.

Clemson, by the way, was 6-0 in one-run games in 2020 when the COVID plug was pulled on the season with the Tigers enjoying a 14-3 start that included a series win over South Carolina.

Sometimes a one-run game — or an RPI rankings vault or drop — comes down to the space required to slide the thin edge of a baseball card between outstretched finger tips and second base.

That was the Clemson case Sunday at Georgia Tech in latest one-run loss.

Clemson baseball on a roll after shaking up pitching rotation

Wright ripped a pitch to left with two outs and Kier Meredith on first base, Clemson down one run in the eighth inning. As Meredith was heading for third, Wright tried to take second base but was thrown out by shortstop Luke Waddell’s slick relay throw to second baseman Austin Wilhite.

The umpires went to the replay booth to watch Wilhite apply a tag that barely beat Wright’s fingers-first slide.

Clemson had national player of the year candidate Caden Grice ready to bat. And if Georgia Tech walked Grice with a base open, then Adam Hackenburg, 7 for his previous 19 at-bats.

Georgia Tech held on for a 9-8 victory and an ACC sweep.

Clemson showed up in Atlanta with a seven-game win streak.

They built a six-run lead Sunday by chasing Georgia Tech starter Marquis Grissom Jr., son of the former major league outfielder who caught the precious final out in the Atlanta Braves’ 1995 World Series clincher against Cleveland.

Momentum in the major league postseason is the next day’s starting pitcher.

Momentum in college baseball is whatever is going on inside the brain of a given teenager put in a big spot.

Fortunately, the best thing about Clemson baseball this season is the Tigers’ best player, Grice, and best pitchers, Mack Anglin and Geoffrey Gilbert, are freshmen.

Grice, Lee’s “absolute monster,” is a strong national player of the year candidate.

But Louisville and Georgia Tech aren’t as good as South Carolina, a team sharpened against the iron of the nation’s second toughest schedule (behind only Arkansas).

No question, Clemson needs this one more.

Larger question: Did February weather do the Tigers a favor, pushing a South Carolina game back and giving Clemson a fresh May 11 case to help the NCAA Tournament Selection Committee decide whether a traditionally good program is good enough this year?

Clemson is 3-9 in one-run baseball games this season: