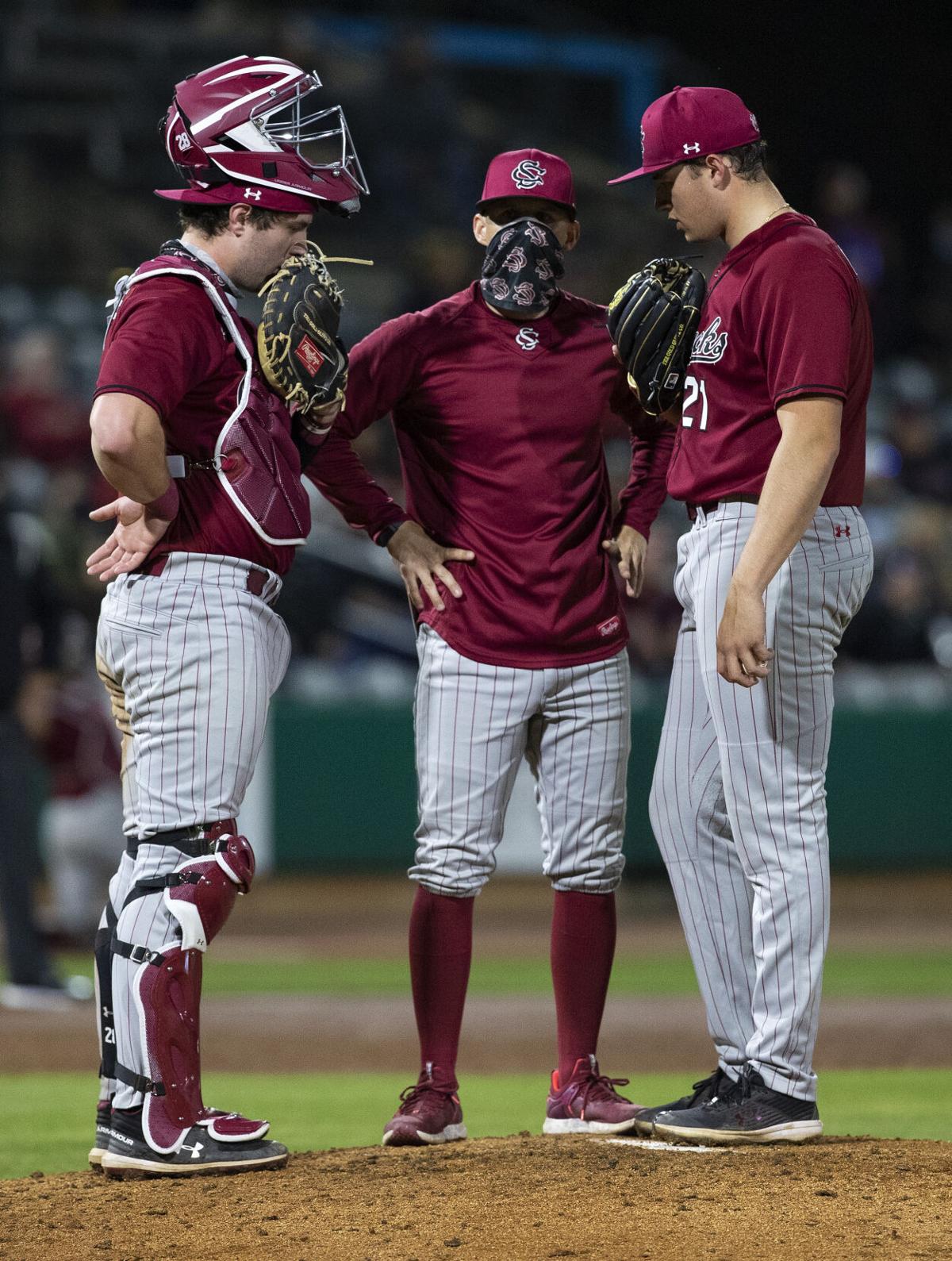 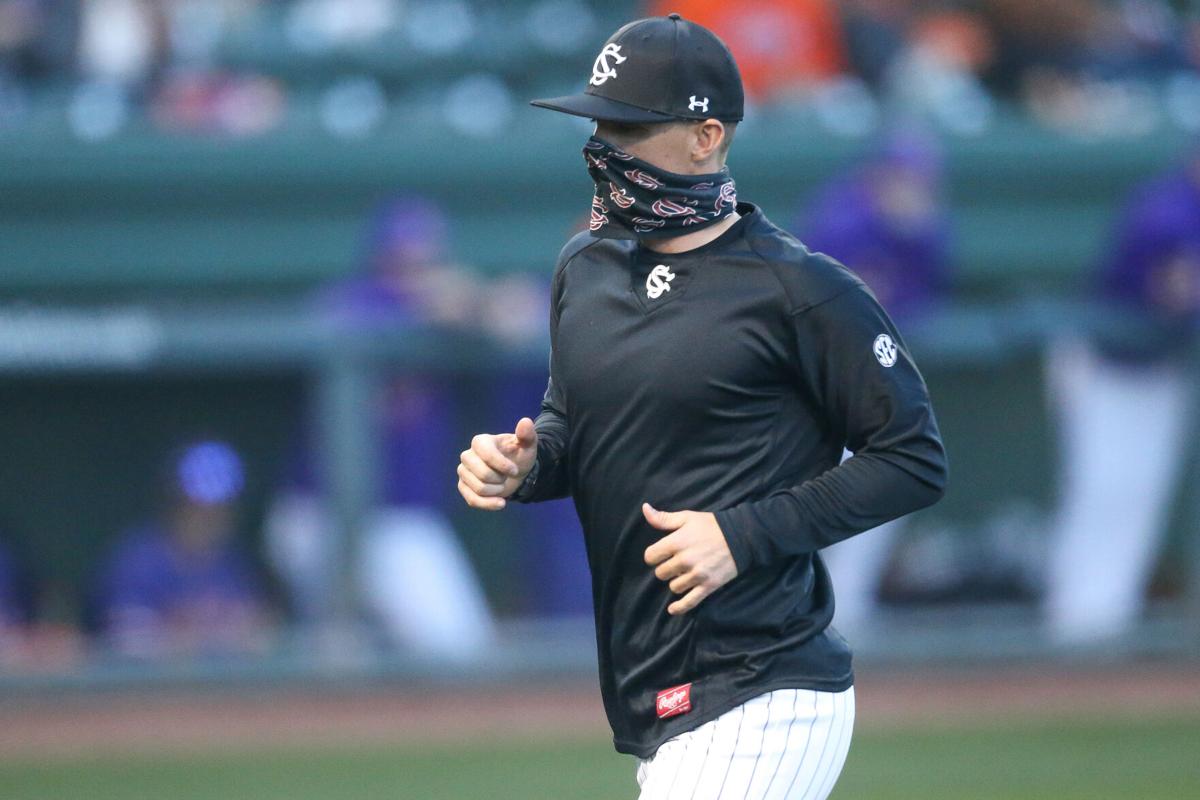 South Carolina pitching coach Skylar Meade has seen a staff full of individual adjustments result in a team earned run average of 3.33, second-best in the SEC going into the Gamecocks' home series against No. 1 Arkansas starting on April 22. Chris Gillespie/SEC pool photo 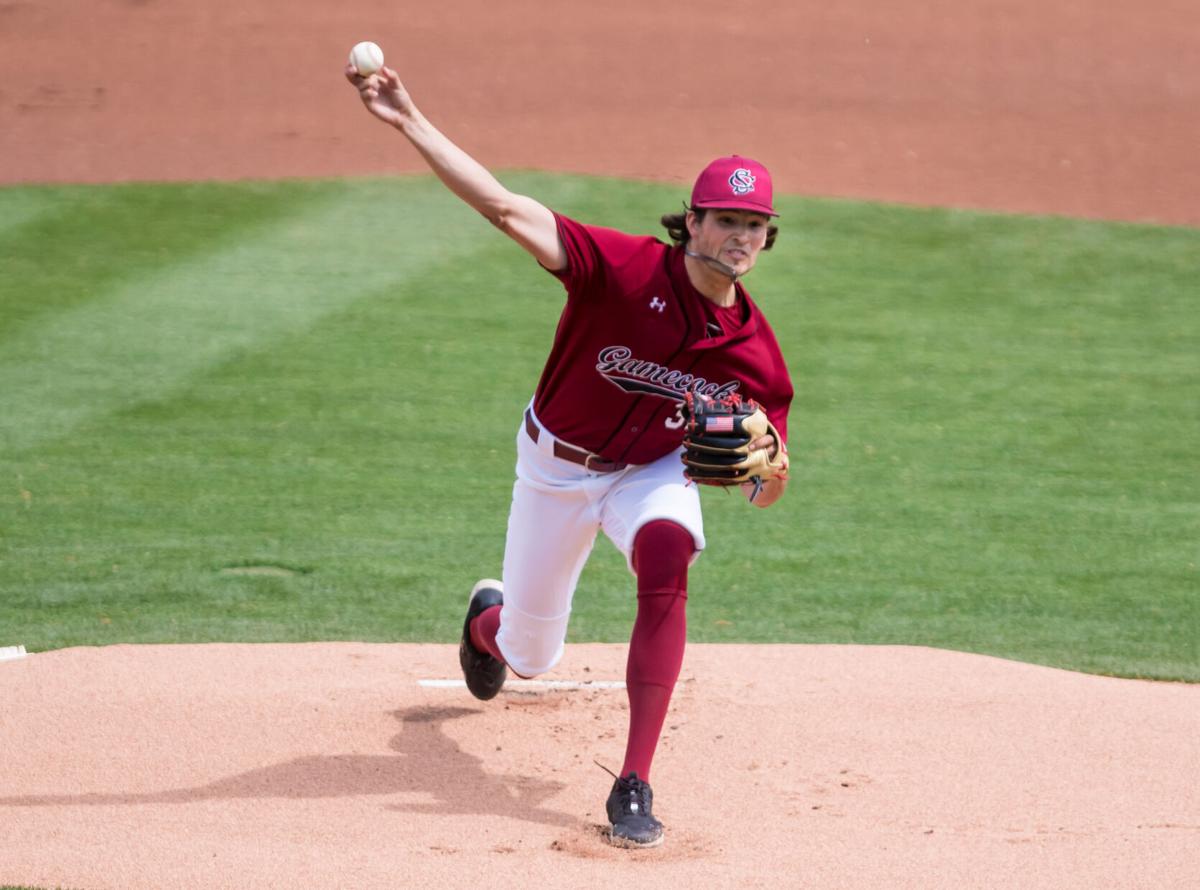 South Carolina freshman pitcher Will Sanders is 6-1 with a 2.11 earned run average, 40 strikeouts and only six walks going into the Gamecocks' home series against No. 1 Arkansas that starts Thursday, April 22, 2021. South Carolina athletics photo

South Carolina pitching coach Skylar Meade has seen a staff full of individual adjustments result in a team earned run average of 3.33, second-best in the SEC going into the Gamecocks' home series against No. 1 Arkansas starting on April 22. Chris Gillespie/SEC pool photo

COLUMBIA — Top college pitching coaches these days think the United Nations menu planner has it easy. Each decorated prospect comes to school with a slightly different mound language and analytics taste as taught by their individual pitching coaches, travel league coaches and high school coaches. Perhaps picked up at the Texas Baseball Ranch or some other elite form of arm-mechanic theory.

“It’s certainly a bit of a personal thing and there are things you don’t want to mess with,” South Carolina pitching coach Skylar Meade said. “But a pitcher that gets to college has to make alterations.

“You can’t stay the same and be good.”

That goes for everything, by the way, from baseball to United Nations food prep.

Few college pitching coaches have been as good at facilitating adjustments as Meade. South Carolina has the second-lowest earned run average (3.33 behind Vanderbilt’s 2.79) in the SEC going into a three-game home series against No. 1-ranked Arkansas starting April 22 at Founders Park. Pitching has been the key to the Gamecocks’ No. 9 national ranking.

All of the South Carolina starters and key bullpen contributors have made noticeable tweaks.

It shows in a .213 opponent batting average. The Gamecocks haven’t done better in that category for a full season since the 1975 team held foes to .188 hitting (though Meade’s crew was at .180 last year when the COVID-19 plug was pulled on a 16-game season that didn’t include SEC games).

Sweet if you can afford it.

South Carolina starters Will Sanders, Brannon Jordan and Thomas Farr get it.

He’s added 30 pounds in director of sports performance Billy Anderson’s underrated, cutting-edge conditioning program. Sanders’ fastball velocity has gone up from the 88-91 mph range in high school to almost 95 now with some action at 97.

“Will is a worker and a learner,” Meade said. “If you can give him a recipe for success, he’s very good about applying that.”

Gamecocks' freshman pitcher lives up to the hype, on and off the field

Jordan, a 6-2, 190-pound right-handed senior from Collinsville, Okla., just north of Tulsa, has turned a decent breaking ball into a power slider.

The big thing with Jordan, Meade said, was getting a high-intensity competitor to maintain composure. A 4-2 record, 3.15 ERA and team-leading 72 strikeouts over 45⅔ innings speak volumes.

Farr, a 6-0, 203-pound junior right-hander, has altered a couple things: more spin on what is now an 84-mph breaking ball, less head tilt in a smoother delivery.

“It helps that Thomas is an animal in terms of work ethic,” Meade said.

Other college teams — even those likely to join South Carolina as 2021 NCAA Tournament regional hosts — would love to have talent such as Brett Kerry (47 strikeouts in 25⅓ innings) and Julian Bosnic (.161 opponent batting average) in the bullpen.

While 24 wins in late April doesn’t guarantee a good season, having 19 games left on the schedule and then a postseason allows plenty of time for second-half breakout candidates.

Keep an eye on two guys:

• Jackson Phipps. Lots to like about a 6-5, 230-pound freshman lefty from Dallas, Ga., with a 95-mph fastball. Beyond the 5.91 ERA in the small sample size of 10⅔ innings are 14 strikeouts and only three walks.

“He’s really been trending in a positive direction for a while,” Meade said.

• Wesley Sweatt. A junior from Rock Hill, Sweatt’s slow start (7.94) ERA isn’t surprising after a 2020 season spent recovering from elbow (Tommy John) surgery. But the 6-3, 213-pound right-hander has seen his fastball edge up to 96 mph.

Before: A younger pitching coach in his interaction with players was “hyper-obsessed” with every throw in practice.

2021: Meade teaches accountability but gives pitchers more space. Instead of hovering, he usually keeps 100 to 150 feet away during long-toss drills.

A typical critique starts with, “Do you know why I got on you? Do you agree with it?”

Meade has made his own effective adjustments to a staff full of pitchers making winning adjustments.

That’s why Kingston might have to adjust to a new pitching coach in the offseason after someone smart makes Meade a head coach.