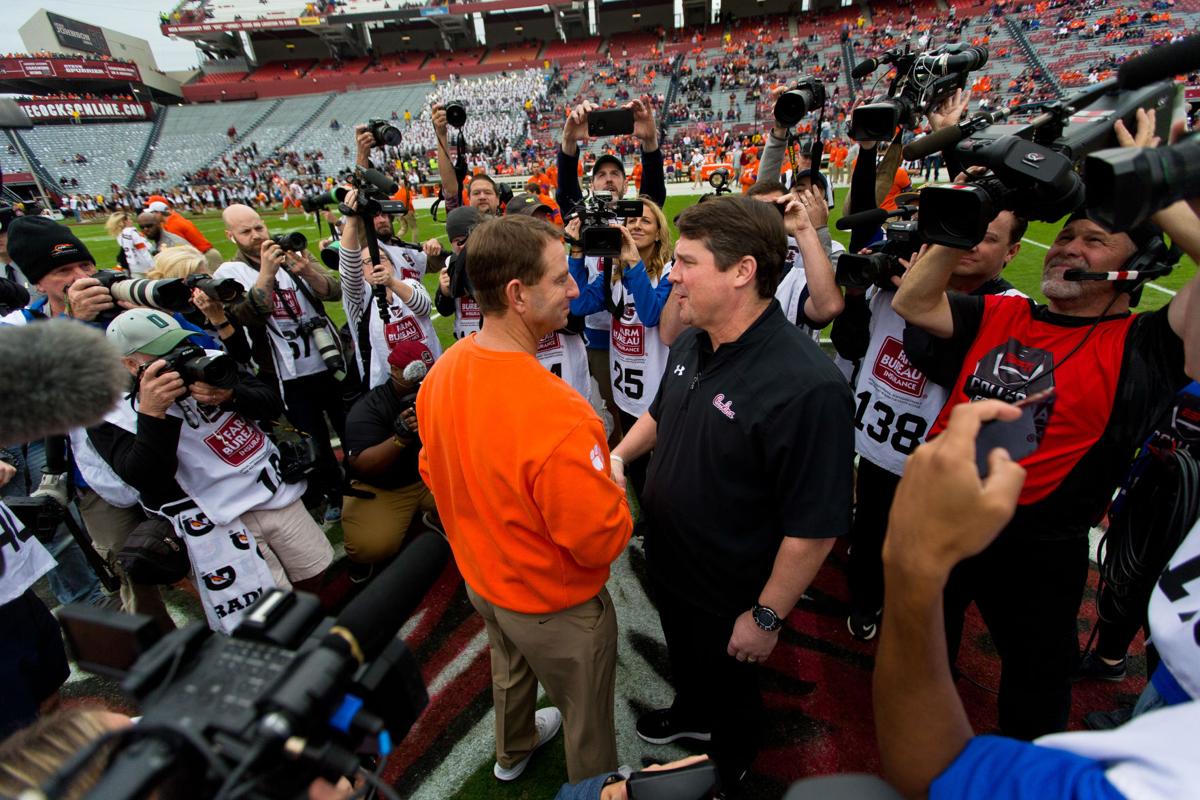 Clemson coach Dabo Swinney and South Carolina coach Will Muschamp meet on the field before their annual rivalry game at Williams-Brice Stadium on Saturday. Andrew Whitaker/Staff 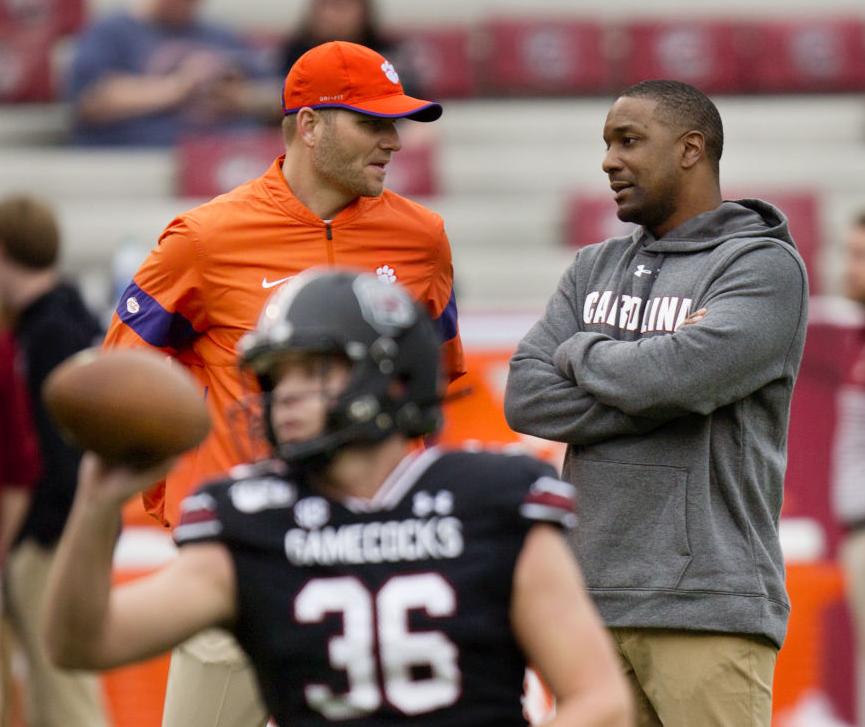 Williams-Brice Stadium on Saturday was peppered with orange and empty seats.

The Gamecocks’ offense took a big step backwards this season, capped with a 38-3 loss to No. 3 Clemson.

John McKissick remembered, praised before and after Clemson-USC rivalry game

South Carolina, 4-8, won’t be going to a bowl game for the first time in Muschamp’s four-year tenure in Columbia.

With the head coach coming back — new South Carolina President Bob Caslen awkwardly confirmed that last week — someone else has to pay.

All signs out the door point to second-year offensive coordinator Bryan McClendon, whether Muschamp’s fellow Georgia graduate deserves the pink slip or not.

“We have to make some changes moving forward,” Muschamp said amid the rubble late Saturday. “I’m not addressing anything as far as that’s concerned, so don’t ask.”

Expect McClendon and another assistant coach or two to get fired soon, to allow them to find other work and give Muschamp a running start at finding solutions.

If you’re a Gamecock fan or someone who likes a little flavor in your Thanksgiving weekend rivalry, hope that Muschamp learns from Dabo Swinney.

Remember when Clemson’s two-time national championship head coach was coming off a 6-7 season in 2010?

He hired Chad Morris, then a play-caller well known in Texas high school circles but with just one year of college experience (as Tulsa offensive coordinator).

Muschamp needs a similarly bold move with his next big hire, and must give the new guy room to get creative.

Such modest ingenuity suffers in the shadow of one touchdown scored on offense in South Carolina’s last three games, all losses.

“Confidence is a major issue,” Muschamp said. “We’re having a hard time in a lot of areas. To sit here and blame one person, I’m not going to do that. At the end of the day we have to be more productive, that’s the bottom line.”

Improvisation, that great American adversity reliever, seemed lost on the Gamecocks for too much of the season.

Of course, limited personnel limits what you can do.

Senior quarterback Jake Bentley, worth two more wins this season, was lost after the opener. He is almost certainly leaving, likely to transfer somewhere very far away from Columbia.

What can you do as a strategist when only one South Carolina player on offense is good enough to start for Clemson?

And wide receiver Bryan Edwards was in street clothes Saturday.

Other injuries and shuffling along the offensive line took a toll.

Hilinski, the talented freshman quarterback forced into action, wasn’t the same after missing a few days of practice following a superb outing against Alabama on Sept. 14. Muschamp said Saturday that Hilinski has been healthy down the stretch and that he “has progressed.”

Muschamp pointed out that there were few complaints last year when the Gamecocks were averaging 425.6 yards and 30.1 points per game. That included Bentley’s five touchdown passes in a 56-35 loss to the eventual national champs at Death Valley.

But when production slips to 371.9 yards and 22.4 points per game, changes beckon.

He is smart and well-connected. He eventually will make a good head coach. If Muschamp can find solace in Swinney’s adversity, McClendon might be able to mine encouragement from Napier’s career arc.

Napier, a 40-year-old former Furman quarterback, did two assistant coach tours under Nick Saban at Alabama before landing the head coach gig at Louisiana in 2018.

So far he’s led the Rajun’ Cajuns to one bowl game with another on the way this season.

One hire isn’t going to start Muschamp’s Gamecocks on the way to 109-15. And no one expects that.

South Carolina fans just want some clear progress, the kind you get when a good rivalry makes each program get better.

South Carolina senior Bryan Edwards, who set USC records for career catches, receiving yardage and consecutive games with a catch, couldn't play against Clemson because of a knee injury.