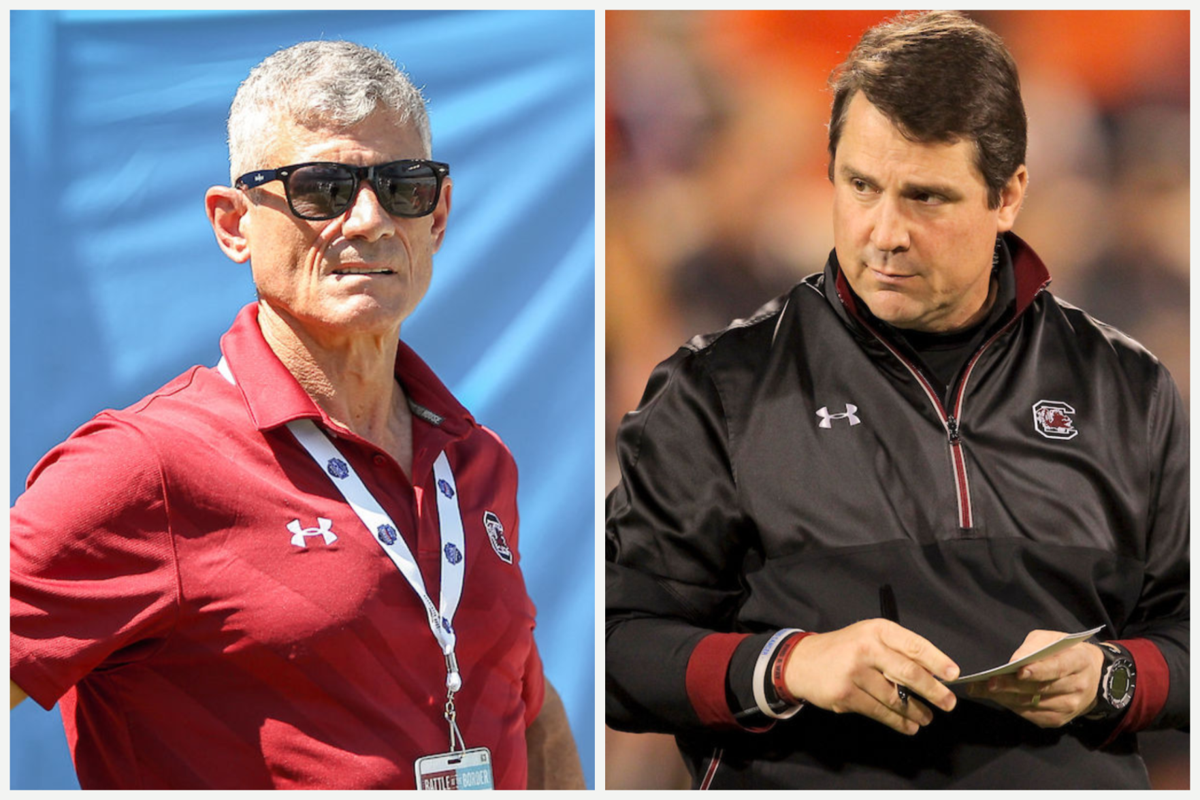 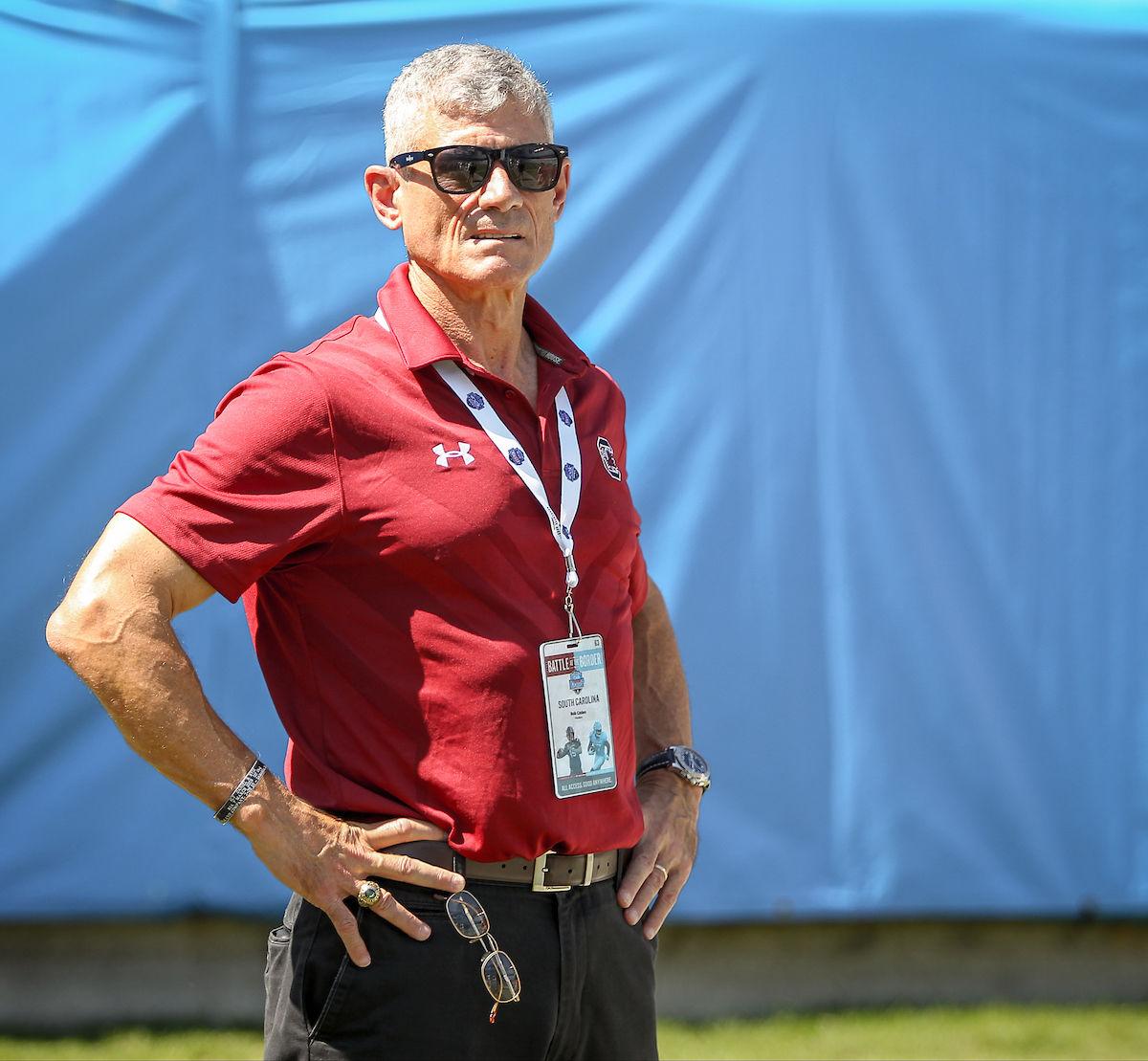 University of South Carolina President Bob Caslen on the sideline prior to the Gamecocks' football season opener against North Carolina in Charlotte on Aug. 31. File/Travis Bell/Sideline Carolina 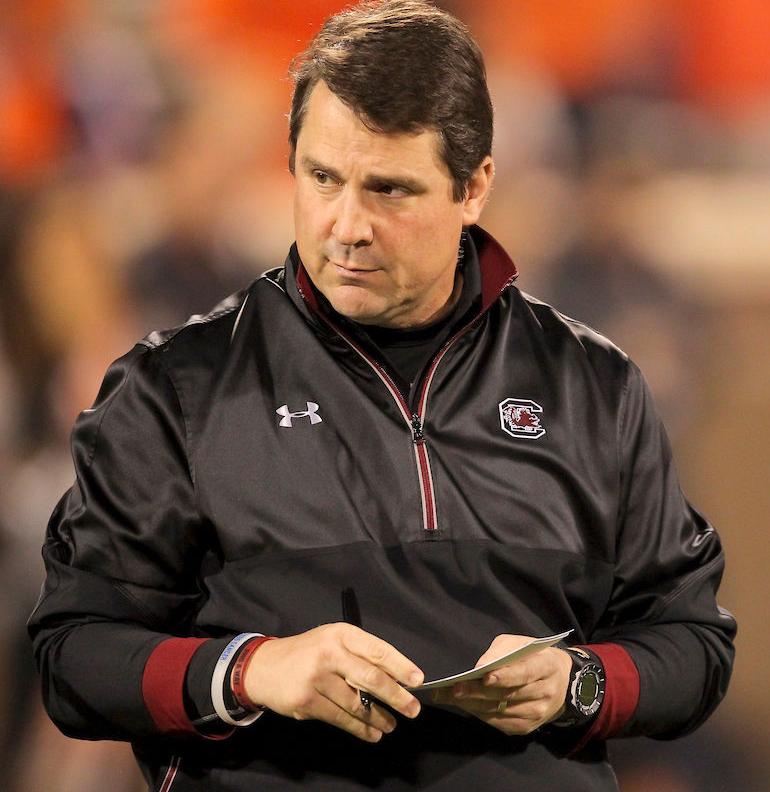 South Carolina head coach Will Muschamp is under fire as the 4-7 Gamecocks prepare to play Clemson on Nov. 30. Travis Bell/Sideline Carolina 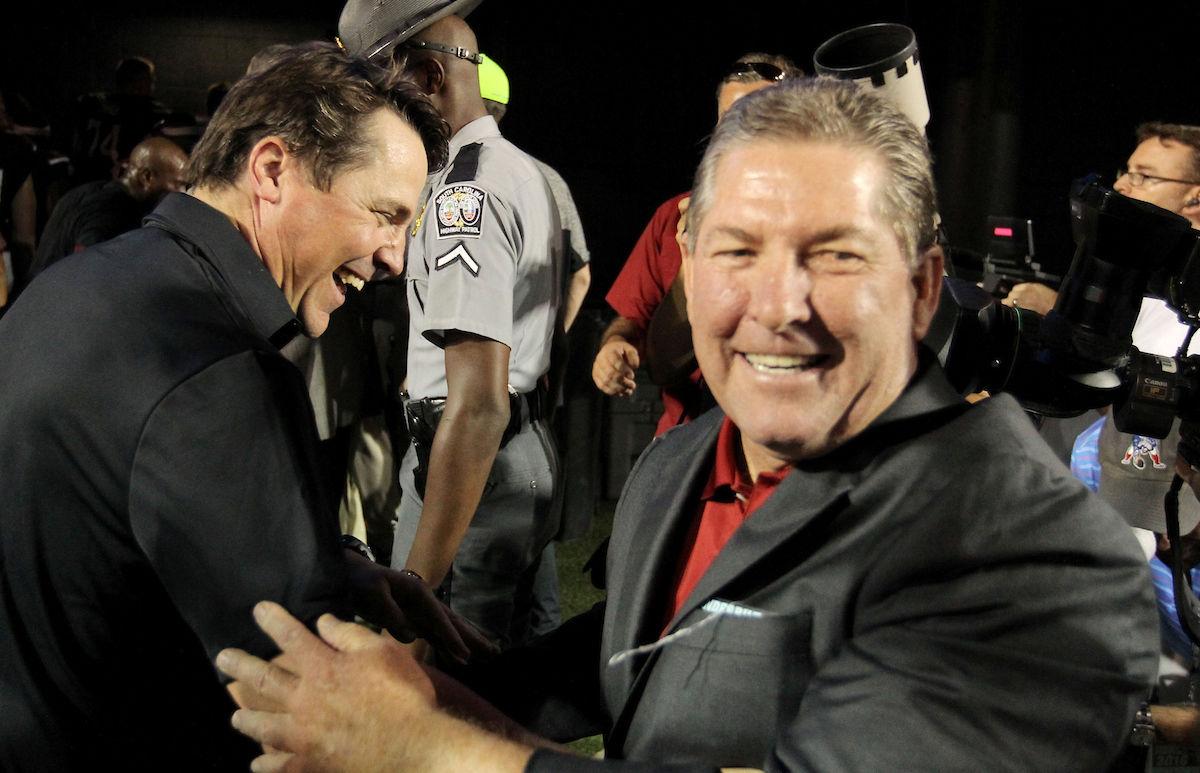 Respect for Will Muschamp was on public display just after South Carolina-Florida football games in 2016 and 2017. One by one, Gators that Muschamp had coached before he was fired in Gainesville in 2014 approached the Gamecocks head coach for handshakes and hugs.

The scene was similar when Muschamp crossed paths with Auburn players at SEC Media Days. It took a short time (just the 2015 season spent as Tigers defensive coordinator) for Muschamp to develop a bond that translated into kind words.

Not so with Bob Caslen, the new University of South Carolina president.

The Gamecocks, billed by Muschamp as his best South Carolina team, are 4-7 going into their Nov. 30 game against Clemson, and the head coach is under fire.

Caslen is fanning the flames.

He is making Muschamp’s life harder, on and off the field, on the recruiting trail and at the grocery store.

Caslen is a retired lieutenant general in the Army and former superintendent of the U.S. Military Academy at West Point; his resume is transported by wheelbarrow. But he is struggling here with basic chain-of-command loyalty.

Whatever you think of Muschamp as a coach, or whether or not South Carolina should fire him and pay off an $18.75 million buyout, those are separate issues. Football performance is in the eye of the beholder, handicapped for such things as in-season injuries and a 26-24 record in Columbia, and a grand win at Georgia and a running game that has mysteriously disappeared.

But expectation of support from the top is more of a consensus thing.

Instead, Caslen over the last few days has been fumbling statements on a tour of the state.

Theme: How Not to Support Your Head Coach

• Greenville, Nov. 12: Caslen while visiting the Greenville News with two games left in South Carolina's season, “Coach Muschamp is my coach. That’s the message. He will be my coach through the end of the season.”

There are votes of confidence.

There are dreaded votes of confidence.

Then there is a Bob Caslen vote of confidence.

7 Takeaways from another road loss, and another loss to Texas A&M

• Columbia, Friday: South Carolina Athletic Director Ray Tanner at a previously scheduled board of trustees meeting not Muschamp-related, issues a statement that goes, “Today, I want to make it clear that Will Muschamp is our football coach and will be our coach going forward. President (Bob) Caslen and I are fully supportive of his leadership and his development of student-athletes on and off the field.”

Caslen declines comment, other than to say Tanner’s statement speaks for itself.

• Florence, Monday: Caslen, while visiting the Florence Morning News, is asked if he has checked with Florida State to see how the school came up with just over $18 million to buy out fired head coach Willie Taggart.

“No, but our athletic director (Ray Tanner) has,” says Caslen, 65. “And they’ve got a whole lot more money in their athletic endowment than we do. I know that, for a fact.”

The South Carolina public relations department late Monday night issued a statement of clarification from Caslen. “Let me set the record straight: Athletics Director Ray Tanner did not speak with anyone at Florida State University about coaching contracts.”

Hey, Bob, talking to other schools about buyouts is dutiful.

Talking to the media about talking to other schools?

Not what your head coach and his staff were looking for as they try to prepare for Clemson and close on recruits.

That’s not all Caslen said in Florence.

He also claimed the Greenville News “twisted my words” with the “He’s my coach until the end of the season” quote.

By the way, Caslen’s “twisted my words” in Greenville charge came a few hours before he changed his Florence story from Florida State.

It’s slightly more sad than amusing that Caslen at his introductory news conference at South Carolina in July promised an ice cream party for any South Carolina team that beats Clemson.

This week, the rookie president needs a Gamecock football crisis management lesson from, of all places, Clemson.

I asked Tigers co-offensive coordinator Tony Elliott late Saturday if he sympathized with Muschamp for having to coach in the same state with a program that has won two of the last three national championships.

“I have a ton of respect for their program and their players,” he said. “(Defensive tackle) Javon Kinlaw is a guy I recruited from Goose Creek. There’s probably not a young man I’m more proud of as far as where he was in high school to where he is now, being a really high draft prospect, and the turnaround he’s made in his life.”

That’s a classy approach and a lesson for Bob Caslen, who needs to learn how to support a current coach and how not to turn off future candidates.

South Carolina football is getting stranger and stranger.