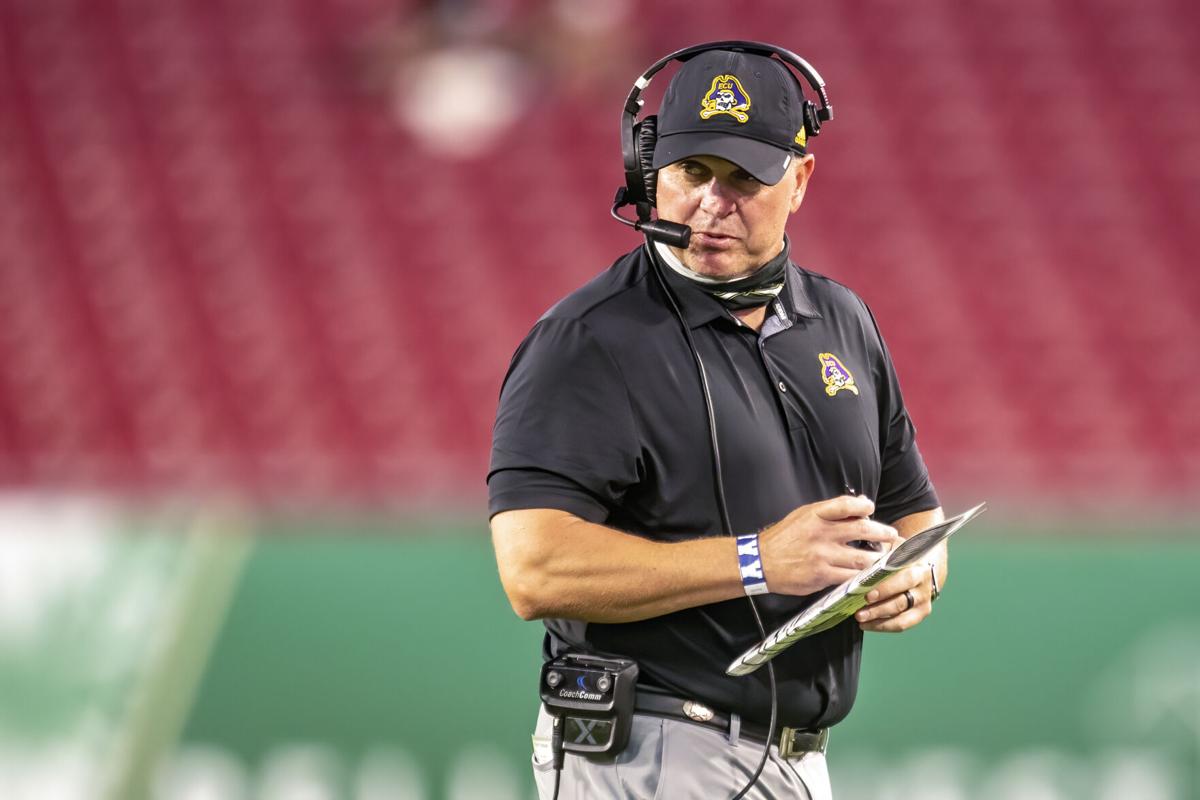 Former Citadel head coach Mike Houston is 7-15 in his third season at East Carolina after coming to Greenville, N.C., from James Madison, where he won the 2016 FCS national championship. The Pirates play host to South Carolina on Sept. 11, 2021. Houston led The Citadel to a win over the Gamecocks in 2015. East Carolina athletics photo 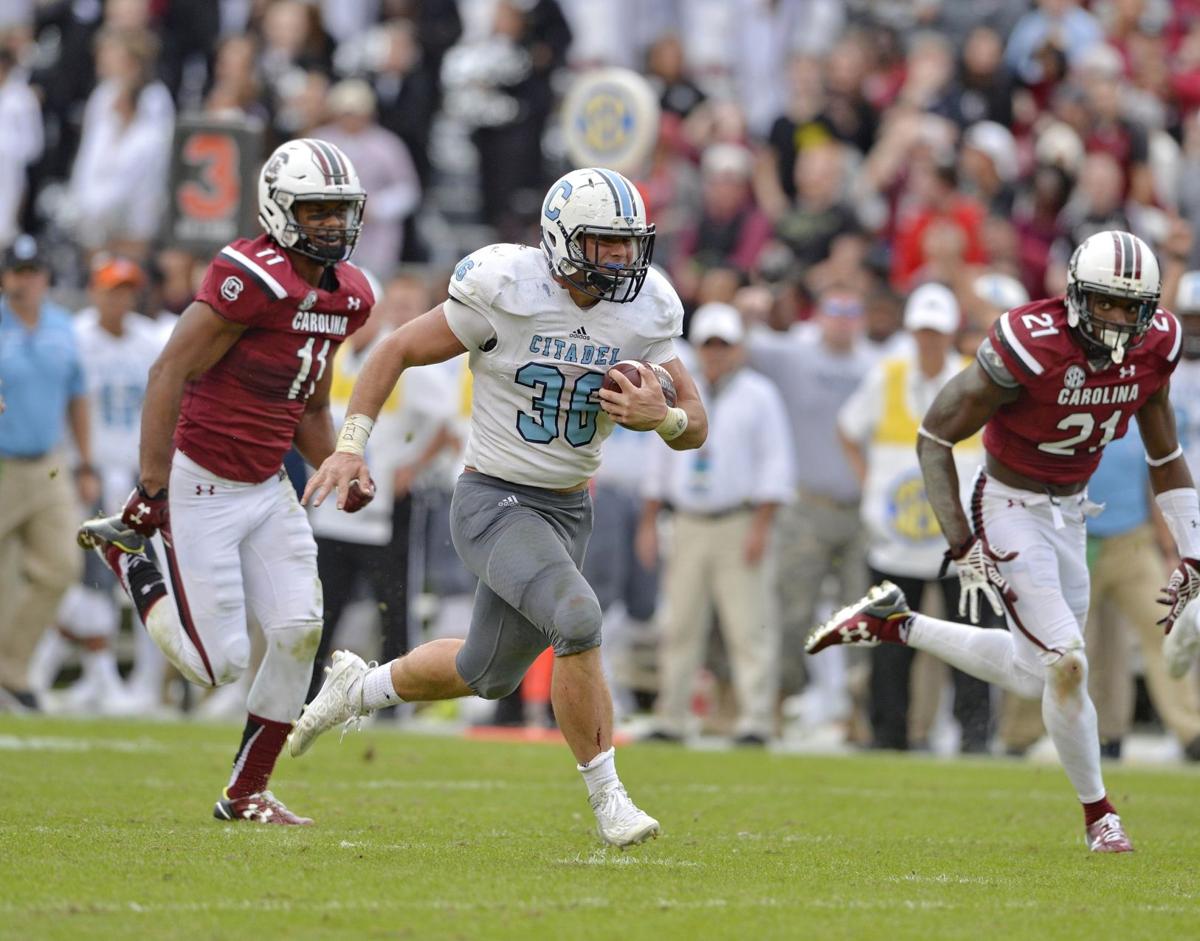 The Citadel's Tyler Renew scored on a 56-yard touchdown during the second half of the Bulldogs' 23-22 upset victory at South Carolina on Nov. 21, 2015, in Columbia. Mike Houston, The Citadel head coach in 2015, leads East Carolina against South Carolina on Sept. 11, 2021. Richard Shiro/AP

GREENVILLE, N.C. – Any reference East Carolina head coach Mike Houston is asked to make this week about The Citadel’s 2015 victory at South Carolina includes emphasis on one word mid-sentence.

Yes, Houston can still see former Bulldogs running back (and Columbia native) Tyler Renew barreling down field on a 56-yard touchdown run that won the game, part of the Bulldogs’ 350 yards rushing that overcast afternoon.

“That seems like a long time ago,” Houston said Sept. 7 amid preparation for ECU’s Sept. 11 home game against South Carolina.

He admits to having “a few” mementoes from the 23-22 victory that left most people in a Williams-Brice Stadium crowd of 77,241 (and SEC Network sideline reporter Paul Finebaum) stunned.

Houston’s favorite keepsake is a photo of The Citadel’s victory formation, nicely framed by his wife Amanda.

It hangs in his office on the East Carolina campus.

“It was a special day for our players and our Citadel fan base,” Houston said. “I had so many great memories at The Citadel and that was probably the highlight.”

The South Carolina brass made efforts to get out of this contracted game, a point-spread toss-up pitting the first version of Shane Beamer’s Gamecocks (1-0) against a program that is Houston’s fourth head coach home in nine years.

“We came in and took over a program that had really struggled,” said Houston, a 49-year-old Franklin, N.C., native in his third season at ECU. “We had to rebuild the roster and we had to do that in the middle of a pandemic. We played a lot of freshman last year.”

This guy knows what he’s doing.

Between leaving The Citadel and arriving at ECU to prepare for the 2019 season, Houston led James Madison to three straight FCS playoff appearances, two national championship games and the 2016 national title.

With Kevin Harris back, Gamecocks hope to get run game on track early at ECU

ECU vs. the run

A season-opening 33-19 loss to Appalachian State in Charlotte on Sept. 2 included some up-and-down moments – for junior quarterback Holton Ahlers (22 of 40 for 295 yards with two touchdowns and an interception) and the rest of the Pirates.

ECU allowed 226 yards rushing and were flagged for 90 yards in penalties.

Ahlers, a capable leader of a veteran team, was on Georgia’s recruiting radar when Beamer was on Kirby Smart’s staff in Athens, Beamer said, as a fallback option had the Bulldogs not signed Justin Fields.

ECU is averaging more than 400 yards a game on offense over its last six games.

Houston will lead this program out of its slump and to its first winning season since 2014. If not this year, soon.

“The roster has stabilized,” Houston said. “We’re still young, but we have depth across the board. We’ve made great strides. We’re not where we want to be yet but we have a map to get there.”

A key question for ECU is where on the U.S. map the Pirates will travel within an American Athletic Conference about to lose its top three football members – Cincinnati, UCF and Houston – to the Big 12.

South Carolina fans don’t like to think about the torment that was a 2015 season in which Steve Spurrier resigned as head coach. Interim head coach Shawn Elliott was a class act after The Citadel loss in the second-to-last game of the year.

“They outcoached us,” Elliott said, “they outplayed us and they outclassed us.”

The 3-9 record of 2015, however, included one more win than South Carolina got in 2020, when Will Muschamp’s last team went 2-8 against an all-SEC schedule, which is why Beamer is the head coach.