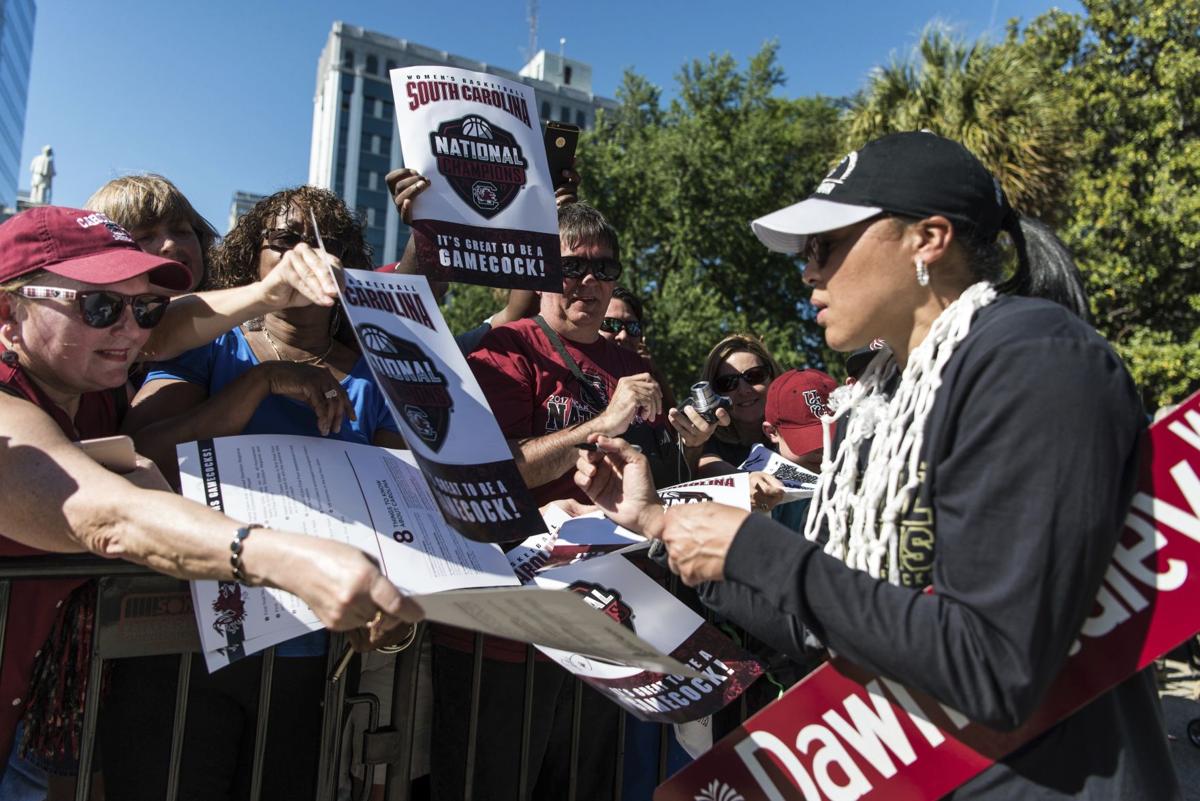 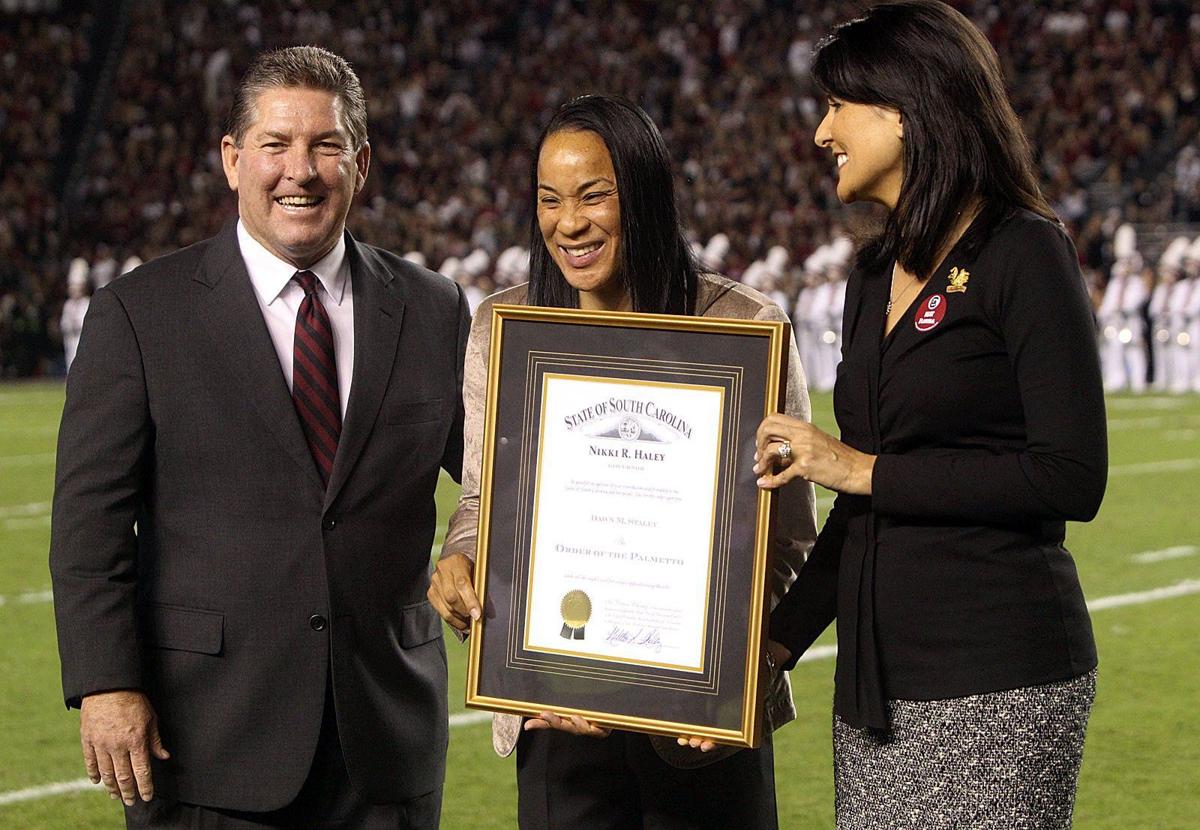 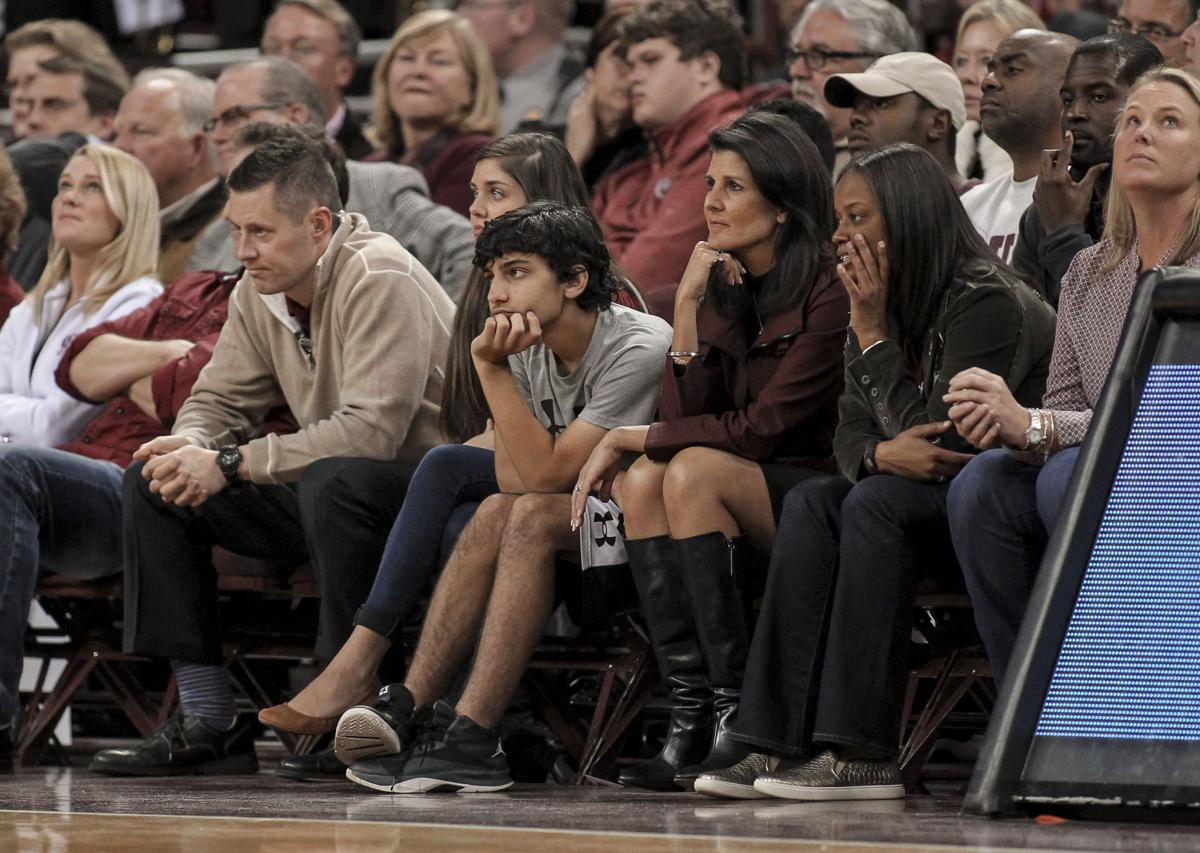 The 2020 stage was set for high-profile display of extraordinary leadership skills. New Orleans and a probable second national championship for Dawn Staley’s No. 1-ranked South Carolina women’s basketball program, and later Tokyo where the former U.S. Olympic team flag-bearer would lead a favored American team to the gold medal.

The coronavirus and widespread reaction to the Memorial Day death of George Floyd at the hands of Minneapolis police changed all that.

Instead of tangling with powers such as Oregon and UConn and Australia, Staley, never one to back down from an important fight, has taken on Donald Trump, Nikki Haley and even her own South Carolina athletic department.

The 50-year-old Philadelphia native shouldn’t have to do the heavy lifting herself.

White coaches — at South Carolina and elsewhere in college and pro sports — should speak up, too.

College athletic departments should have diversity meetings that include progress reports.

Meanwhile, Staley is clearly enhancing an activist role. She is determined to see words become action, and she's properly impatient. But she is finding out progress is still a hard road.

As with most social change applications, this one starts at home. Staley last week in a Facebook Live appearance with The State newspaper in Columbia stressed that she wanted “more people who look like me in decision-making positions” at USC.

That’s an expected refrain from a caring black coach. Staley also pointed out that she is one of two black head coaches on staff (track/cross country coach Curtis Frye is the other) and that there are two black administrators in the athletic department: Charles Waddell, Special Assistant to athletic director Ray Tanner; and Maria Hickman, Senior Associate Athletics Director for Academics and Student Development and Chief Diversity Officer.

But taking a swipe at Hickman’s job qualifications, that was anything but typical for an active coach in the same department.

Staley could probably run for governor and win.

But she knows her role, basketball coach. When I asked her last year about perhaps eventually becoming an athletic director, she winced at the idea of corporate management.

Not that Staley is afraid of playing politics.

She clobbered Trump in a first-person Players Tribune story about Floyd’s death posted June 1 and titled “Black People Are Tired.”

“Trump is the president of the United States, and if he’s not unifying,” she wrote, “he’s not helping.”

Staley and Haley clashed in a Twitter exchange July 8 after the former S.C. governor and U.N. ambassador tweeted support for Kelly Loeffler, a U.S. Senator from Georgia and co-owner of the WNBA’s Atlanta Dream. Loeffler was lobbying the Dream to drop plans to support Black Lives Matter.

Haley: “Proud of @KLoeffler for standing up to the mob wanting sports to be about uniting people, not dividing people based on political agendas.”

Proud of @KLoeffler for standing up to the mob wanting sports to be about uniting people, not dividing people based on political agendas. https://t.co/WLUwS63nbc

Staley: “The ultimate division is packed in this tweet. We shall and will overcome.”

The ultimate division is packed in this tweet. We shall and will overcome. https://t.co/3fHNgk9J1c

Of course, slamming a president more or less supported by 50 percent of Americans isn’t all that unifying when you’re trying to unify.

Just as accusing a former governor of division tends to stir division.

Unification and politics mix about as well as garnet and orange.

Sapakoff: Thanks, Clemson, for Calhoun change; thanks, George Floyd

A productive conversation about race rarely works well, Staley must know, in the free-for-all circular firing squad that is social media.

Also, it would help if more people understood that TV “news” programs in America are entertainment productions based on either servicing an echo chamber or stoking point-counterpoint conflict.

College sports diversity remains a tough path, tougher with coronavirus-related financial strife that will force job and program cuts and limit hiring perhaps over a period of several years.

Just know that Dawn Staley has a proven ability to rally a community and state around her.

She made Haley, a Clemson graduate, a Gamecocks women’s basketball fan.

Their discussions (if not actual friendship) were part of the groundwork in Haley’s decision to push the Confederate flag from statehouse property soon after the 2015 Emanuel AME murders.