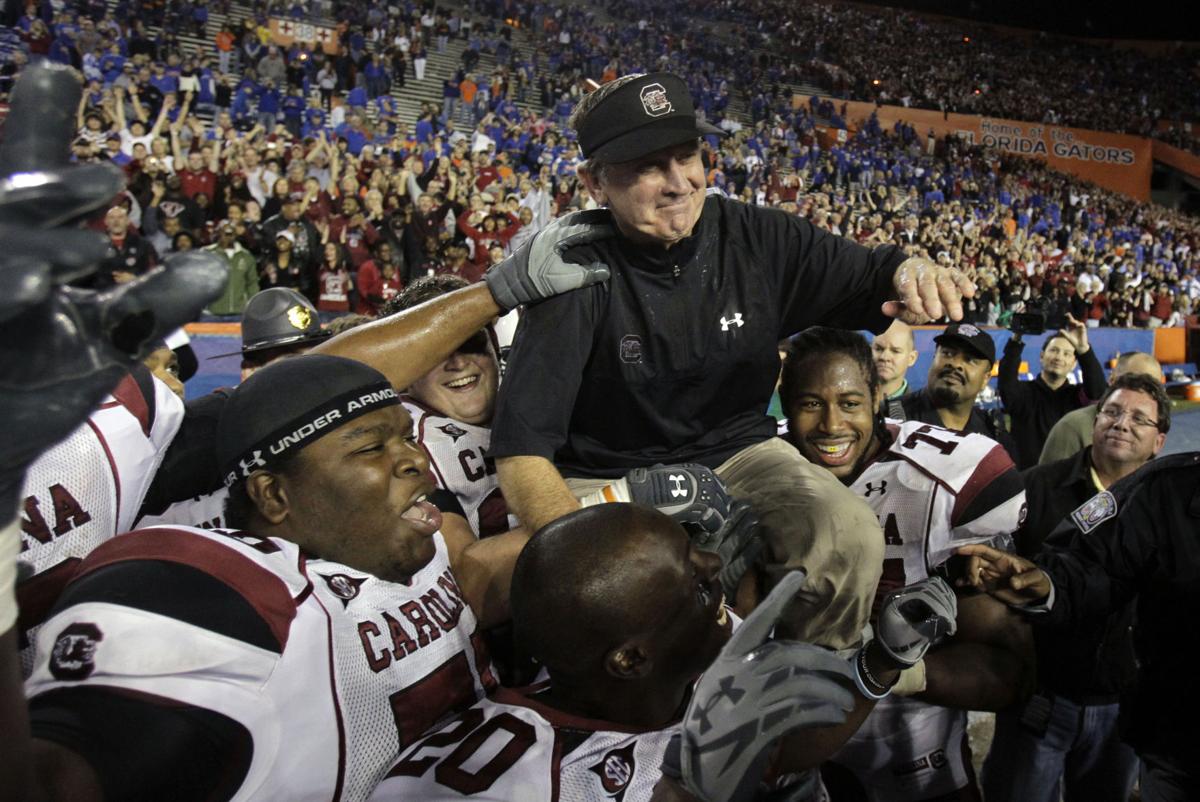 South Carolina head coach Steve Spurrier is carried off the field after the Gamecocks' 2010 win at Florida that clinched the SEC East title. Doing the honors are offensive linemen Garrett Chisolm (No. 77 at right) and Kyle Nunn. Chisolm, now living in Charlotte, graduated from South Carolina and West Ashley High School. File/John Raoux/AP 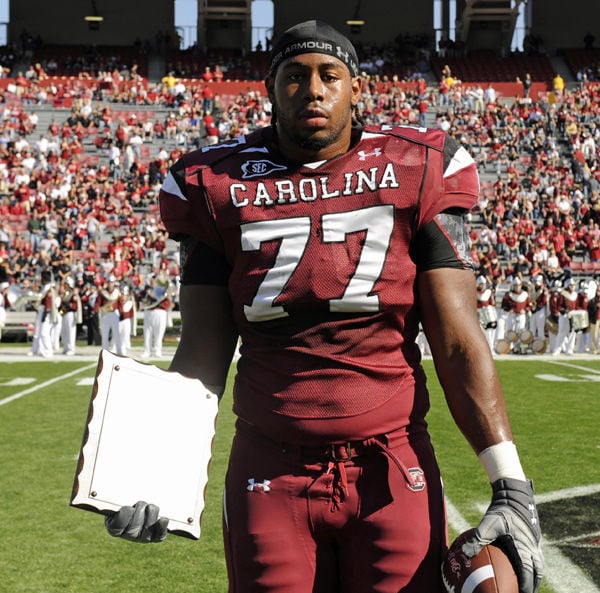 South Carolina left guard Garrett Chisolm, a West Ashley High School graduate from Charleston, stood alone on the Gamecocks' 2010 Senior Day after losing both of his parents to cancer that year. File/University of South Carolina Athletics/Provided

Shawn Elliott watched the final seconds tick off the scoreboard clock at Ben Hill Griffin Stadium, as did the astonished fans sticking around on a cool November night in Gainesville. Most people in what started out as a crowd of 90,000-plus came to pull for the Florida Gators but just had to see how Steve Spurrier, their former national championship-winning head coach, might celebrate.

“Pick him up, Chiz!” Elliott, South Carolina’s offensive line coach, shouted to left guard Garrett Chisolm, a senior from Charleston. “Pick him up!”

And with that, Chisolm and fellow offensive lineman Kyle Nunn carried Spurrier on their shoulders 10 years ago after South Carolina’s 36-14 victory clinched what remains the Gamecocks’ only SEC East title.

Gamecocks shuffling lineup ahead of game at No. 3 Florida

“Definitely out of my character to do something like that,” recalled Chisolm, a former walk-on who paid for his first year at South Carolina after attending Pikeville College in Kentucky and Trident Tech in Charleston.

Look at the photo.

It’s one of the most famous in South Carolina football history, huge versions of which are on display in various spots at Williams-Brice Stadium, on campus, in bars, in restaurants, in man caves.

Spurrier, wearing a signature visor, can’t contain pride that comes with smashing his alma mater on the same field where he won the 1966 Heisman Trophy.

“Mr. Spurrier was actually very humble about it,” Chisolm said. “After a few steps he told Kyle and I, ‘Ah, OK, put me down now.’ ”

No one in the shot can match Chisolm’s smile. It's part joy, part exhale.

It magnifies a highlight night within a great football season that was part of a nightmare year for Chisolm personally.

So much has happened in the decade between that game and the Gamecocks’ preparation for Saturday’s challenge against No. 3 Florida at Steve Spurrier-Florida Field, renamed in 2016.

Spurrier left South Carolina and is back at Florida as an official “ambassador” (when he’s not making beer commercials).

Will Muschamp was hired as head coach at Florida, fired after a 2014 overtime loss to Spurrier (the Gamecocks’ only other win at The Swamp) and is in his fifth season as head coach at South Carolina.

Elliott, who served as Gamecocks interim head coach between Spurrier and Muschamp, is head coach at Georgia State.

Chisolm, 32, works in Charlotte for a company that facilitates travel nurse assignments.

He had brief NFL stints with the Miami Dolphins, San Francisco 49ers and Carolina Panthers.

But it’s the non-football stuff that’s happened over the last 10 years that must make Chisolm’s parents proud as they look upon their oldest son.

He graduated from South Carolina with a degree in sports management and a minor in business.

He was a member of the All-SEC Academic Team and made the SEC’s Community Service Team.

Chisolm isn’t married and doesn’t have any kids, but is a doting uncle to his niece, the daughter of his younger brother, Cedric Chisolm.

Garrett Chisolm Sr. and his wife Purcella stressed work ethic and school while running a janitorial service in Charleston.

Both died of cancer in 2010. Purcella passed in January. Garrett Sr. died in September — the same week South Carolina was to open SEC play at home against Georgia.

“I’ll never forget my father’s last words to me as I left the hospital,” Chisolm recalled. “He said, ‘Beat Georgia.’ I went straight from the hospital to practice. I knew I had to make that happen.”

Freshman running back Marcus Lattimore rushed for 182 yards and two touchdowns, carrying the ball 37 times behind a determined offensive line that kept knocking Bulldogs almost back across the Savannah River. The Gamecocks won 17-6.

South Carolina went on to stun No. 1 Alabama before pulling into Gainesville and rolling over Urban Meyer’s Gators.

“I remember Marcus Lattimore getting a lot of carries,” Chisolm said. “We rushed the ball and we showed our dominance that game.”

Oh, yeah: 40 carries for 212 yards and three touchdowns for Lattimore, who was always willing to share credit.

“He’s probably the most physical (blocker) on the offensive line,” Lattimore said of Chisolm. “He’s a very focused guy. He comes off the ball with force. Every time I see the hole on his side, I know he did it. He’s been a big part of my success.”

One week after Chisolm celebrated in a crowded visitors’ locker room at Florida, he stood alone for a Senior Day ceremony on the field at Williams-Brice Stadium.

Chisolm didn’t even know anything about the Senior Day concept while in high school, and so his parents didn’t even come for the pregame festivity at West Ashley.

“I told myself that night that if I ever got the chance in college I’d want them to come for Senior Day,” Chisolm said.

Instead, while the other players shared the moment with a parent or two before a game against Troy, Chisolm was by himself as he received a Senior Day plaque and souvenir football with a crowd of 74,117 looking on.

Chisolm points to Elliott as one of the people who helped get him through that horrible, glorious 2010 season. The bond is mutual.

“Garrett was a quiet giant in 2010,” Elliott said. “We both found trust in one another that season. He’s one of those players that makes you love what you do and I’ll never forget him for that. I love Big Chiz.”

Some Gamecock football things have changed for the better, some not so much.

Chisolm and his 2010 teammates didn’t receive “full cost of attendance” stipends of over $5,000 per year, as Power Five conference players do now.

“That would have been wonderful,” Chisolm said.

Chisolm helped the Gamecocks beat Clemson his junior and senior years. The Tigers will take a six-game series win streak into 2021 with no game scheduled for this year.

Gamecocks' Muschamp challenges receivers to 'step up'; linebacker out with hip fracture

“It’s just sad,” Chisolm said with a sigh, “to be in a world where Clemson has just won two national championships.”

Some things, however, are frozen in time.

Elliott grasped the historical perspective in the heat of the moment.

“As for carrying Coach Spurrier off the field, I told Chiz to grab him because it was going to be great TV,” Elliott said. “It was us winning the SEC East and winning in The Swamp.”

Indeed, that smile on Garrett Chisolm’s face will never go away.